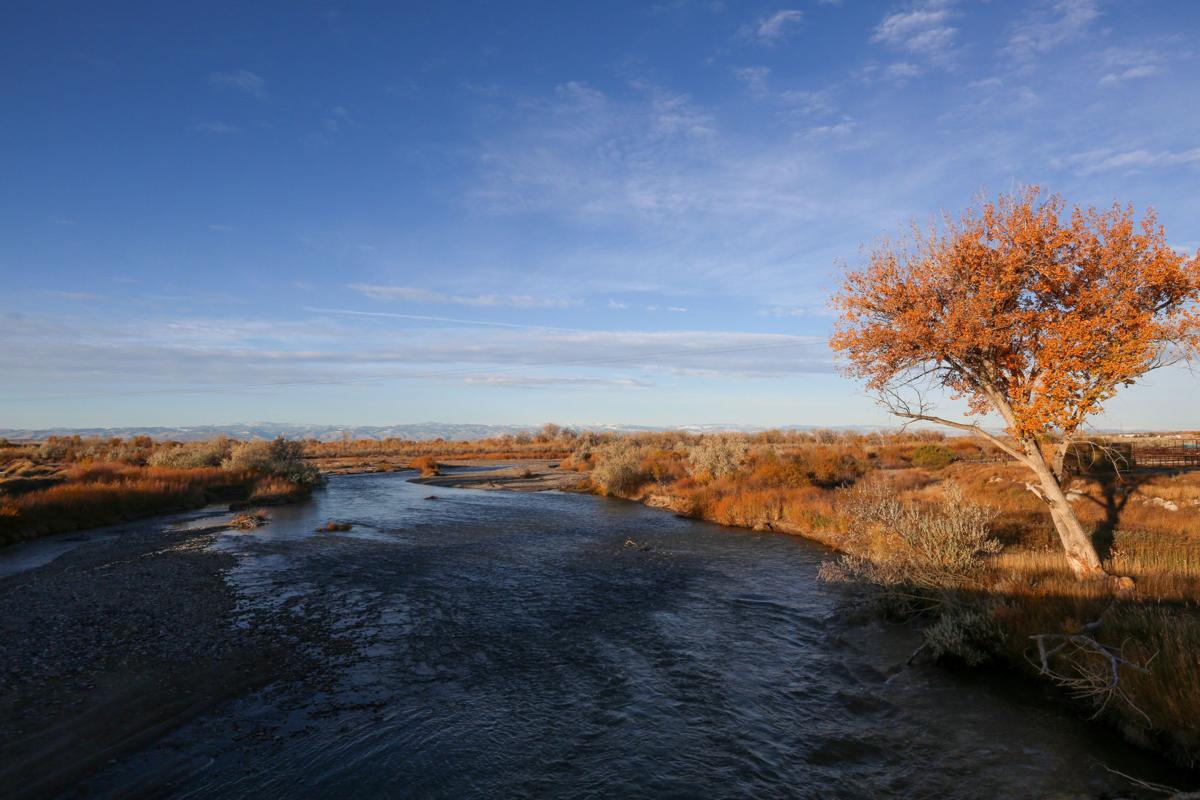 The Wind River runs along the boundaries of Riverton. The federal government and the Native American tribes consider the land north of the Wind River native land, while Wyoming believes it to be state land. A three-judge panel of the Tenth Circuit Court of Appeals ruled Wednesday that the city is not part of the Wind River Reservation. 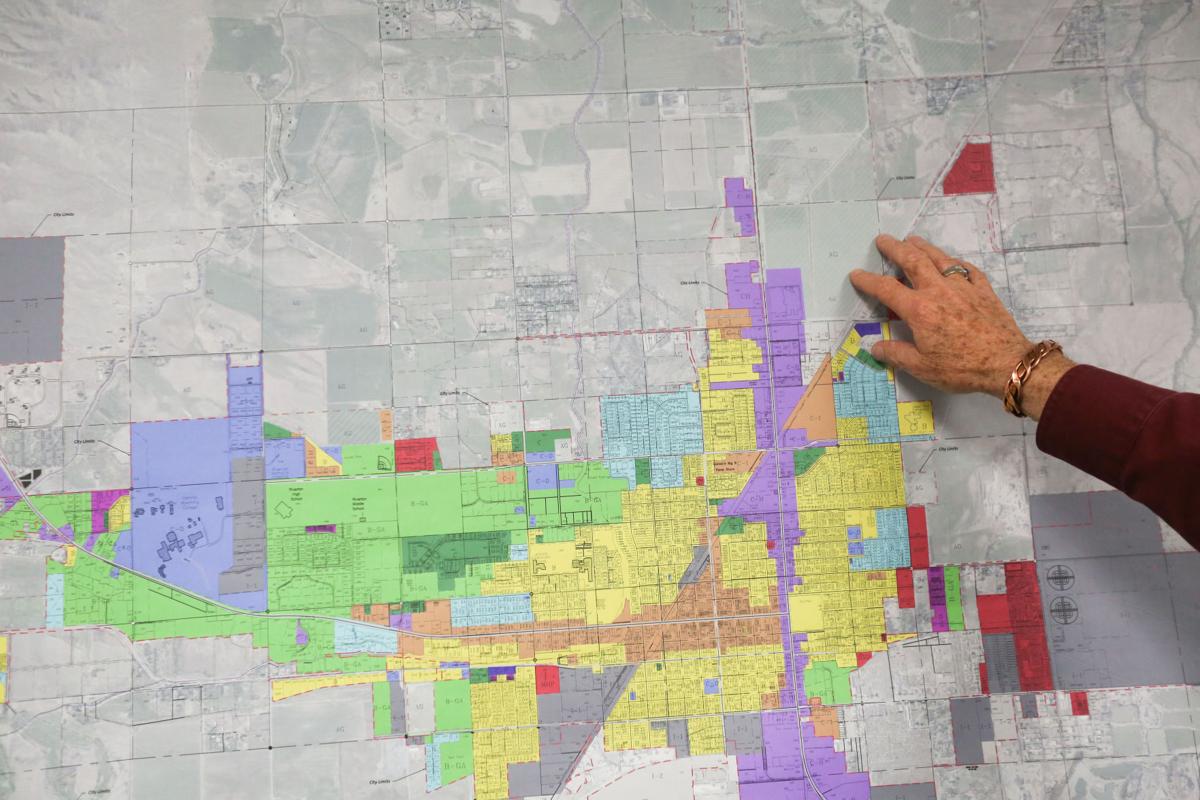 Mayor of Riverton John “Lars” Baker points to a map of the city on the wall in his City Hall office in October. A three-judge panel of the Tenth Circuit Court of Appeals ruled Wednesday that the city is not part of the Wind River Reservation.

Historic reservation land north of the Wind River — including the town of Riverton — belongs to the state of Wyoming and not to the Northern Arapaho and Eastern Shoshone tribes, the Tenth Circuit Court of Appeals ruled Wednesday.

The decision is the latest in a long dispute over whether a 1905 agreement between the tribes and the federal government to open land on the Wind River Reservation for sale to non-Indians was intended to change the boundaries of the reservation.

While the federal government and the tribes argued that the deal did not erase tribal sovereignty over the land opened for sale, a three-judge panel ruled that Congress meant to diminish the size of the reservation when it approved the deal.

“There are no magic words of cession required to find diminishment,” Chief Judge Timothy Tymkovich wrote for the majority. “But our scrutiny of the circumstances surrounding the 1905 Act confirms Congress indeed intended to diminish the Reservation’s boundaries.”

The Northern Arapaho Tribe said in a statement Wednesday afternoon that it would appeal the decision to the full Tenth Circuit, which has 12 judges.

The case goes back to 2008, when the Northern Arapaho and Eastern Shoshone tribes stated in an application for an Environmental Protection Agency program that their reservation boundary extended north of the Wind River and included the town of Riverton, land covered by the original 1868 Treaty of Fort Bridger.

Riverton and the state of Wyoming disagreed, and the EPA asked the Department of the Interior, which oversees the Bureau of Indian Affairs, where the boundary was. The Interior department agreed with the tribes’ assessment.

“The 1905 Act does not contain any of the hallmark language evincing clear congressional intent to sever the land addressed by that Act from Reservation status,” wrote Interior attorney Hilary C. Tompkins.

First, Congress must have clearly intended to shrink the size of the reservation according to the language of the law it passed;

second, courts should examine the circumstances surrounding the law;

finally, and to a lesser extent, courts should consider what happened after the law was passed.

Tompkin’s opinion, supported by the tribes, was that the 1905 agreement was not intended to shrink the size of the reservation.

She noted that in 1874 and again in 1897, the tribes had agreed to sell land on the Wind River Reservation to the federal government and cede control of the territory.

But the 1905 deal was different. Instead of a single lump-sum payment, the federal government would open plots north of the Wind River for sale. Any areas that weren’t purchased would return to tribal control.

The Supreme Court has determined that if language in a law passed by Congress included clear reference to selling or ceding reservation land and the federal government paid tribes a lump-sum for the property, then the land is no longer part of a reservation.

The federal government and tribes argued that since no lump-sum payment was made in 1905, the reservation had not been diminished.

But Tymkovich ruled that while both clear language and payment confirmed that a reservation’s boundaries had been amended, a boundary could also be changed without both those conditions being present.

“[T]his presumption is not a two-way street,” he wrote.

Tymkovich found that the language of the 1905 agreement and the circumstances surrounding its approval was sufficient to show that both the tribes and Congress believed they were changing the boundaries of the reservation.

In a dissent, Judge Carlos Lucero argued that the majority opinion upended longstanding legal precedent holding that courts must err on the side of tribal sovereignty when it is unclear whether or not Congress intended to change the boundaries of a reservation.

Beyond the lack of a lump-sum payment in exchange for the land north of the Wind River, Lucero noted that the 1905 agreement had not placed the reservation land in the public domain.

Rather, the federal government continued to hold the land in trust while offering it to private buyers and later returning any unsold land to tribal control.

“Because the lands at issue here were held in trust under the (1905) Act, they remained Indian lands,” he wrote.

Lucero was appointed to the Tenth Circuit by President Bill Clinton, and was the only Democratic appointee on the three-judge panel.

“Judge Lucero was right and that is why we believe that the majority opinion will be overturned,” co-chairman of the Northern Arapaho Business Council Lee Spoonhunter said in the statement.

Lawyers representing the Eastern Shoshone Tribe did not respond to a request for comment, but a member of their business council weighed in on Facebook.

“This is disappointing to say the least,” Leslie Shakespeare wrote.

Democratic appointees hold a 7-5 majority on the appeals court.

But Gina Cannan, who represented the Wyoming Farm Bureau Federation, said she believed the full panel of judges would uphold the decision.

She said the ruling would help farmers and ranchers in Fremont County, who would have become subject to federal and tribal — rather than state — environmental regulations if their property was found to be within the reservation.

That would have impacted pesticide use and underground fuel tanks, among other issues, Cannan said.

“It makes a big difference in terms of how they operate their farm and ranches from a regulatory and a cost standpoint,” she said.

Gov. Matt Mead praised the court’s ruling and argued that it was inappropriate for the EPA to determine the reservation’s boundary, despite the agency’s deference to the Department of the Interior.

“The EPA’s decision went against 100 years of history and was one that should not come from a regulatory agency,” Mead said in a statement.

He added that the state would work with the tribes on environmental regulations “now that both federal and state courts recognize the correct boundary of the Reservation ...”

Former U.S. Interior Secretary Ken Salazar has joined the Eastern Shoshone Tribe’s lawsuit against the state of Wyoming over the boundary of t…

The U.S. Supreme Court brought a tense dispute over the Wind River Reservation’s boundaries to a close Monday: Riverton, the largest city in F…

The Wind River runs along the boundaries of Riverton. The federal government and the Native American tribes consider the land north of the Wind River native land, while Wyoming believes it to be state land. A three-judge panel of the Tenth Circuit Court of Appeals ruled Wednesday that the city is not part of the Wind River Reservation.

Mayor of Riverton John “Lars” Baker points to a map of the city on the wall in his City Hall office in October. A three-judge panel of the Tenth Circuit Court of Appeals ruled Wednesday that the city is not part of the Wind River Reservation.