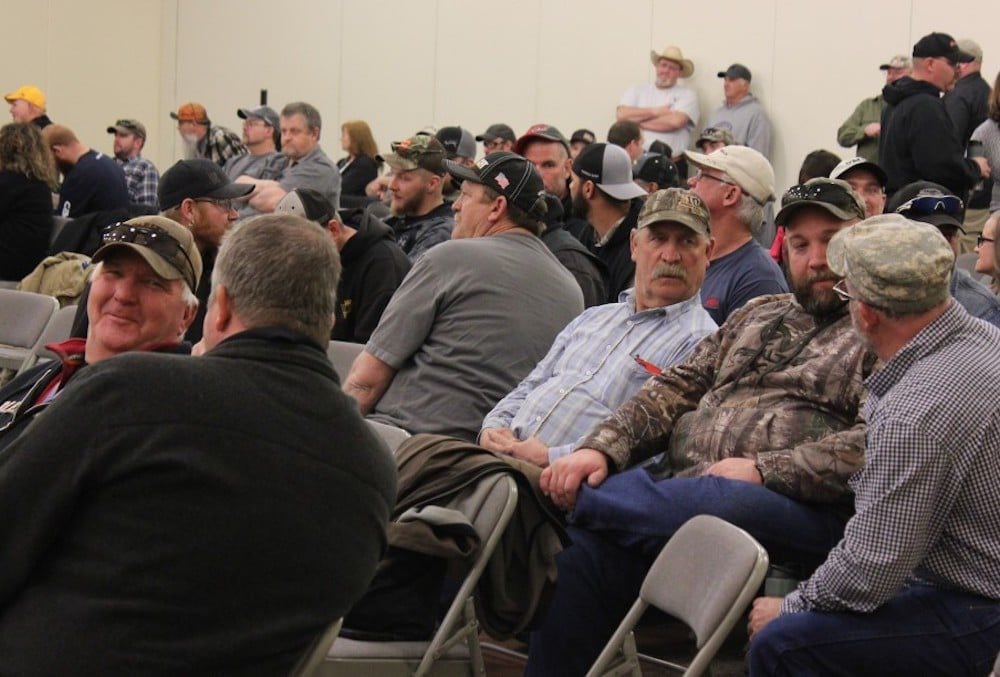 Kemmerer miners and United Mine Workers of America members packed the South Lincoln Training and Event Center in Kemmerer on April 20 to hear contract negotiations between UMWA and Westmoreland leadership. The coal firm is attempting to kill its contract with current unionized members.

PacifiCorp's Naughton Plant and the Kemmerer Mine are shown in Kemmerer. The Trump administration has plans to subsidize coal-fired and nuclear power plants.

Fossil fuel critics are questioning a Wyoming plan to spend up to $22.5 million in public funds to expand a coal mine even as its owner appears headed for bankruptcy and a key customer prepares to curtail consumption.

State lawmakers earlier this year approved a measure that earmarked $15 million to relocate a highway north of the Kemmerer Mine, a move that would allow mining to expand. The Legislature made its appropriation in the face of diminishing demand for the mine’s coal at a neighboring power plant. The measure calls for another $15 million contribution from “county or private funding,” expected to be a 50/50 split with Westmoreland Coal, the Kemmerer Gazette reported.

On top of that closure, Westmoreland Coal Company, which owns and operates the Kemmerer Mine, said a month ago it is considering reorganization — widely reported as bankruptcy reorganization — amid a troubled nationwide coal market.

Ultimately, the futures of 300 miners, plus the security of their families and the Kemmerer community may hang in the balance. PacifiCorp could not immediately say how many employees work at the Naughton Plant.

It’s another worrisome story from Wyoming’s energy sector, this time playing out in the state’s southwest corner, far from the better-known eastern Wyoming coal mines and power plants near Gillette. Despite criticism, the lawmaker who championed the road-relocation legislation doesn’t think his measure is either misguided or a waste.

“I see Westmoreland restructuring in the long run,” State Sen. Dan Dockstader (R-Afton) said of the Colorado-based coal company. Westmoreland Coal has profitable contracts in place for the Kemmerer Mine, he said, and has a unique low-sulfur, high-energy resource.

“This is a good operation,” said Dockstader, a member of the Legislature’s Appropriations Committee. “The whole driving force for me is those 300 jobs.”

Community support is also important to Sierra Club’s Wyoming chapter, said Connie Wilbert, chapter director and a critic of the road relocation plan. “We are very concerned about workers, communities, families in the state,” she said.

But she is skeptical Westmoreland can pull out of its nose-dive even with the state’s investment. The company’s stock value fell so far it was removed from the Nasdaq Stock Market last month.

“We just see this highway reconstruction as a classic example of the state trying to cling to the past, trying to prop up an industry that is diminishing instead of spending state resources in other ways,” she said. “It just seems like a waste of money.”

Dockstader’s measure appropriates $7.5 million from a state reserve fund and directs the Wyoming Department of Transportation to ante up another $7.5 million. The legislation, State Funded Capital Construction, requires “county or private funding” to add a matching $15 million, plus any overruns. Already Westmoreland signed a $1 million contract to have WYDOT engineer the project, Dockstader said.

During the last Legislative session, support for moving the highway was widespread even amongst spending-wary Senators.

Dockstader highlighted the mine’s strengths. Kemmerer coal sells for $40 a ton, compared to $12 a ton for coal from the Powder River Basin, he said. The mine has customers in the trona industry, among others, and could be mining coal through 2027 if the highway is relocated and the mine expanded.

There’s another 67 million tons of coal to be mined in that location, almost 20 years of work, Dockstader said, and $305 million in tax revenue. The 300 mining jobs pay an average salary of $85,000 annually, he said. “That’s why I was pushing it,” he said of his legislation.

If the mine continues to operate, workers will benefit, he said. “They’re going to be able to buy homes, a pickup truck,” Dockstader said. “It’s [about] a family that’s living in Kemmerer and [a kid] going to high school.”

That’s a big if, according to Wilbert.

Westmoreland’s market is shrinking, she said. “They have not given any indication they have a new client waiting in the wings” to replace Naughton, Wilbert said. “That’s a huge question and one we, frankly, need answers to.

“Why would the state be risking our money to do this, at best, highly speculative [undertaking] trying to accommodate this mine?” she asked. “This just doesn’t seem to be a realistic path, a rational way to use scarce state resources right now.”

The towering power plant was named for Edward Naughton, the former president of Utah Power & Light Co., now called Rocky Mountain Power, a division of PacifiCorp. The company commissioned Unit 1 in 1963 on 1,120 acres. With two other units added within eight years, the plant can generate 700 megawatts. At Lower Valley Energy, a western Wyoming power supplier, employees calculated that a 700 megawatt plant could power 175,000 all-electric homes.

Twenty-story boilers generate steam to run generators and the units are equipped to reduce emissions. Water for operations is piped from the nearby Hams Fork, downstream from the Viva Naughton reservoir, named after Edward Naughton’s wife.

The Kemmerer Mine, a surface operation, covers 13,400 acres, digging coal from the Adaville Formation. Overhead conveyors transport the coal to the power plant and trucks and railcars move it to trona mine customers some 60 miles away.

PacifiCorp’s Eskelsen said the company has maintained since October 2016 that it intends to close Unit 3 at the end of 2018, now adjusted to January 2019. Clean Air Act pollution regulations enforced by the Wyoming Department of Environmental Quality are driving that timeline. The company “will continue to assume early retirement of Naughton Unit 3 in January 2019,” a 2017 integrated resource plan updated and released on May 1, 2018, says. But the company is still examining the potential of converting the unit to run on natural gas. The next word on that conversion could be seen in the company’s 2019 resource plan.

There’s no prospect of administrative relief from Washington, D.C., either, Wilbert said. “I don’t think the current administration can throw out federal legislation like the Clean Air Act,” she said. “That’s our bedrock environmental law.”

At the mine, Westmoreland Coal, which operates throughout North America, has seen its stock prices take a plunge from more than $43 a share in 2014 to less than 20 cents this spring. Plummeting values forced it out of the Nasdaq Stock Market, increasing the probability of bankruptcy reorganization. The company talked about restructuring in a report issued last month.

“Westmoreland expects to file its annual report … referring to Westmoreland’s conclusion that substantial doubt exists regarding its ability to continue as a going concern,” the report says. “Gary Kohn, Westmoreland’s Chief Financial Officer, stated, ‘Together with our financial and legal advisers we are designing an improved capital structure for Westmoreland Coal and all of our subsidiaries.’”

Westmoreland Coal has guaranteed mine reclamation through $83.2 million in surety bonds, according to a document on file with Wyoming DEQ. Unlike problematic self-bonding in which companies simply pledge to reclaim sites, surety bonding involves a third-party guarantee. Nevertheless, a recent GAO report finds potential problems with that system.

“Some parties we interviewed have also noted that the costs and duration of long-term water treatment are not well defined and that surety bonds are not well suited to provide assurance for such indefinite long-term costs,” the GAO report said. “Some parties we interviewed noted that surety companies have declared bankruptcy or experienced financial difficulties in the past and could experience similar difficulties in the future.”

Pouring money down the drain?

Restructuring may require Westmoreland to sell some of its assets, an analyst told Wyoming Public Radio. Westmoreland also is seeking a $100 million loan to solve some of its problems, The Wall Street Journal reported.

Those machinations come as the outlook for coal dims further, according to an analysis by S&P Global, a financial data firm. It said last month that more than 3.6 percent of the coal produced in the U.S. in 2017 went to plants that will close within four years.

“We think that the future of the coal industry is going nowhere but down,” Wilbert said. “There’s nothing in Wyoming we can do. This is global.”

Because of differences among companies and regions, plus potential foreign markets, none of the broad-ranging predictions mean the Kemmerer mine will close. But bankruptcy and its effects are on the minds of Kemmerer miners as United Mine Workers of America engaged recently with Westmoreland over their contracts. Existing contracts have been extended to accommodate negotiations, according to the Kemmerer Gazette, which reported that health care and pensions are among the issues being negotiated.

A union representative did not return a request for an interview from WyoFile by press time, but Wilbert said the company should not disregard workers as other coal giants in Wyoming recently have.

Sierra Club criticized Peabody Energy, Alpha Natural Resources and Arch Coal Inc., for their bankruptcy actions over the last two and a half years, including paying handsome salaries and bonuses to executives, leaving workers with “slashed pensions and healthcare,” and endangering neighboring communities with pollution.

“We need to make sure we’re doing everything we can to help the families and workers affected,” Wilbert said. “There were proposals for actual funding to go to communities to help them through this period. There are worker retraining programs. That’s what we support.”

Because the road project will take several years to plan, there’s time to sift through Westmoreland’s reorganization plans once they are finalized, she said. Meantime, Wilbert would rather the state refocus its priorities. “If we had some good state policies,” she said, “that would be nice instead of trying to prop up these industries that are going away.”

Dockstader said he hasn’t engaged the union or the energy companies. But he believes he has paved a path that could lead to a healthy Kemmerer.

“My part is to lay the template for it,” he said. “At some point I have to stand back.”

In Kemmerer life is not full of despair, Mayor Anthony Tomassi said in a telephone interview. Downtown merchants give mixed reports. “You ask one person, it’s pretty quiet, another guy, they’re doing fine,” he said. “Restaurants and stuff, they seem to be all relatively busy.

“I think we’re fairly optimistic about the future,” he said. “Maybe it’s optimistic/hopeful.”

Kemmerer miners and United Mine Workers of America members packed the South Lincoln Training and Event Center in Kemmerer on April 20 to hear contract negotiations between UMWA and Westmoreland leadership. The coal firm is attempting to kill its contract with current unionized members.

PacifiCorp's Naughton Plant and the Kemmerer Mine are shown in Kemmerer. The Trump administration has plans to subsidize coal-fired and nuclear power plants.