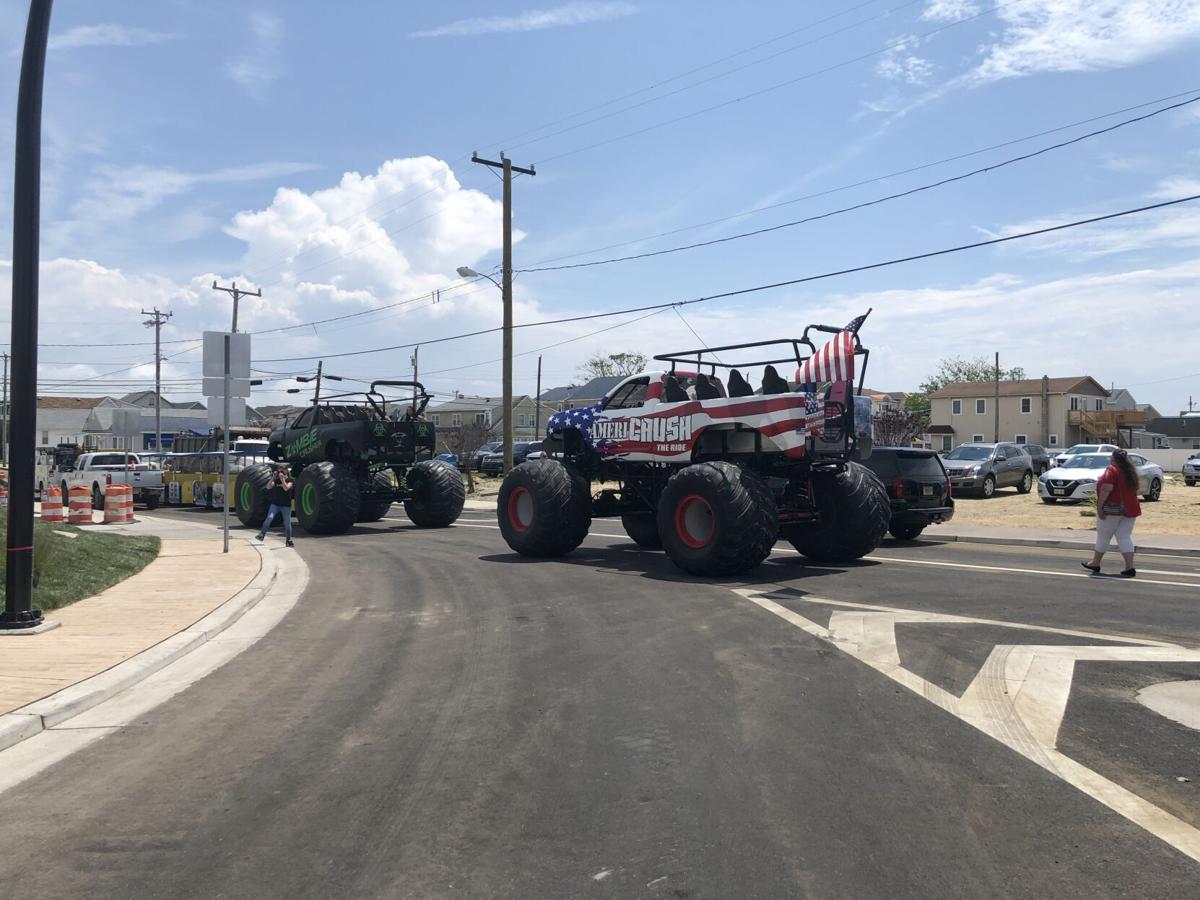 A pair of monster trucks followed behind the Wildwood Sightseer Tram Car as the motorcade drove through a ribbon to mark the official completion of the renovation project. 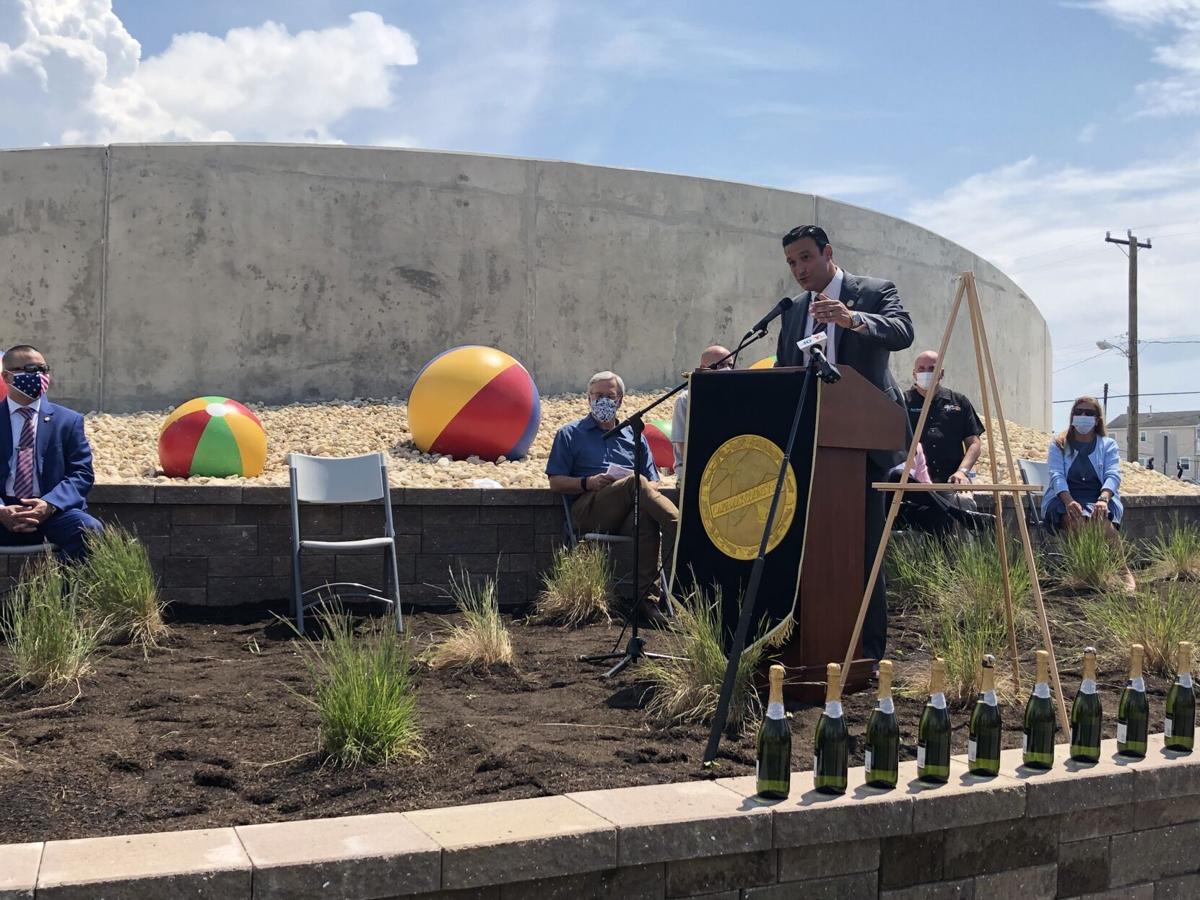 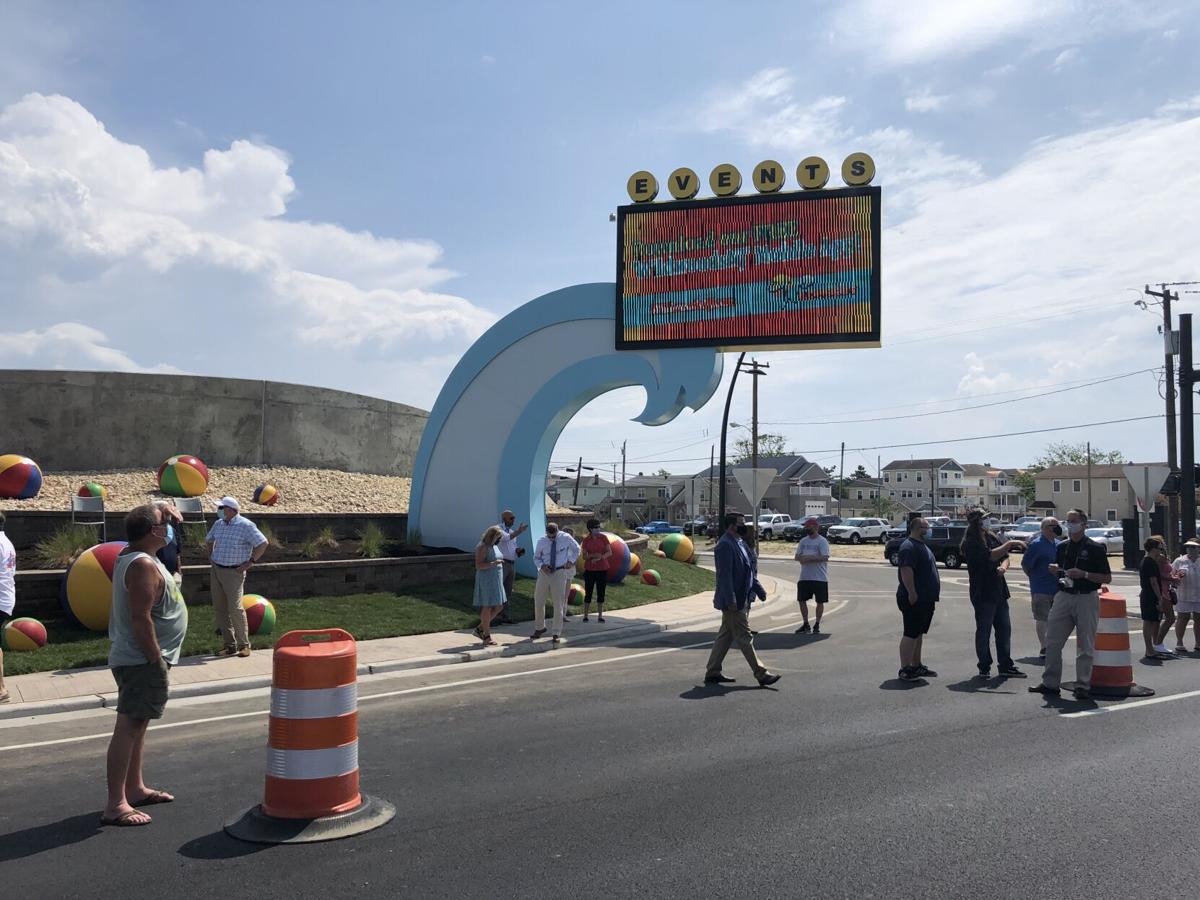 Planning for the gateway project began five years ago, when city officials wanted to address the flooding issue at the intersection of Rio Grande and Susquehanna avenues. 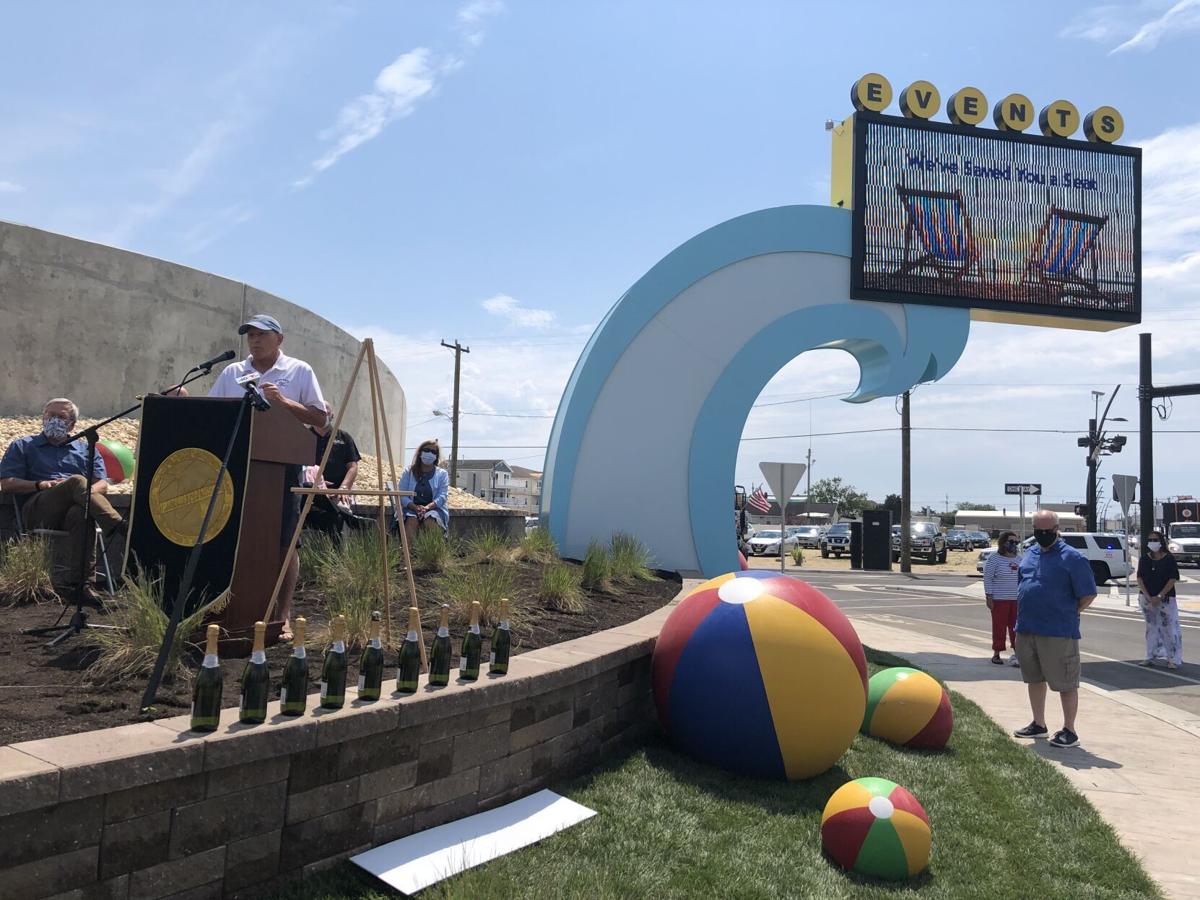 Morey’s Piers owner Jack Morey said Wildwood’s effort to establish its own identity began 25 years ago with the building of the Wildwoods sign at Rio Grande Avenue and the Boardwalk.

AHMAD AUSTIN For The Press

WILDWOOD — The Wildwoods have made consistent efforts to set themselves apart from the other shore towns of the state over the past 25 years.

Wednesday’s gateway unveiling was the latest chapter in those efforts.

A few dozen people gathered at Rio Grande and Susquehanna avenues for a unique ribbon-cutting ceremony.

The festivities began with a motorcade down Rio Grande. Led by the Wildwood Boardwalk’s iconic Sightseer tram car, the motorcade began at the base of the George Redding Bridge before driving through the red ribbon at the gateway.

Gov. Phil Murphy said Tuesday that while many restaurant and bar owners are following mandated COVID-19 guidelines, it only takes one person to “undo months of progress and ruin it for the rest of us.”

A pair of monster trucks were also part of the motorcade.

“It was 30 years ago this summer that the city of Wildwood gave me my very first job on the Wildwood Beach Patrol,” said state Sen. Mike Testa, R-Cape May, Cumberland, Atlantic. “And I have to tell you, I remember coming across this bridge many times, and it had a lot of problems with flooding. This is now much prettier, and it’s not going to flood anymore. It’s absolutely awesome.”

Planning for the $13.7 million renovation of the entrance to the island began at least five years ago.

According to Freeholder Will Morey, who’s also the president and CEO of Morey’s Piers, the city wanted to not only address the constant flooding at the intersection, but also take advantage of the opportunity to do something special.

“There was a flooding problem, (and) there was an access problem,” Morey said, “so we started to look at how we address these public safety issues.

“In doing that, the team stepped back and said, ‘How can we make this a fantastic gateway entry into the Wildwoods, as well? We’re going to spend money doing all this stuff. How can we make it not just functionally but really aesthetically inviting and fun?’”

The St. Augustine Prep community mourned one of its alumni this week.

The Cape May County Board of Chosen Freeholders, the Greater Wildwoods Tourism Improvement and Development Authority, and state, county and local government and business officials collaborated on the project, officials said.

The renovation included the new gateway, which has an electronic screen advertising upcoming events on the island, and a new water pump system to prevent flooding. The road also was raised 30 inches.

“The first project that said to the public, ‘Wildwood has arrived,’ was the Wildwood sign.”

As if the laundry list of restrictions for restaurants opening amid the new coronavirus aren’t enough, some eateries in South Jersey have been imposing even more conditions in preparing and serving meals — strict guidelines aimed at environmental concerns.

Beach balls were placed around the new gateway like the ones seen near the Wildwoods sign on the Boardwalk.

Additionally, Mayor Pete Byron announced that as a result of a poll of island residents, Rio Grande Avenue would become Beach Ball Boulevard.

“No disrespect to Rio Grande, but now we have our own identity,” Byron said. “The most photographed location on the island arguably is the Wildwood walls and sign, which is up at the Rio Grande beach, so this is the gateway right into that, as well.”

Gov. Phil Murphy announced Thursday that flags around the state, which have been at half-staff to honor the victims of the COVID-19 pandemic and their families, will return to full-staff July 3.

The number of positive cases of COVID-19 in New Jersey has increased by 524, bringing the total to 170,584, Gov. Phil Murphy said Friday.

EGG HARBOR TOWNSHIP — A local veteran made history this month after he was sworn in as commander for the Department of New Jersey Veterans of Foreign Wars.

A pair of monster trucks followed behind the Wildwood Sightseer Tram Car as the motorcade drove through a ribbon to mark the official completion of the renovation project.

Planning for the gateway project began five years ago, when city officials wanted to address the flooding issue at the intersection of Rio Grande and Susquehanna avenues.

Morey’s Piers owner Jack Morey said Wildwood’s effort to establish its own identity began 25 years ago with the building of the Wildwoods sign at Rio Grande Avenue and the Boardwalk.