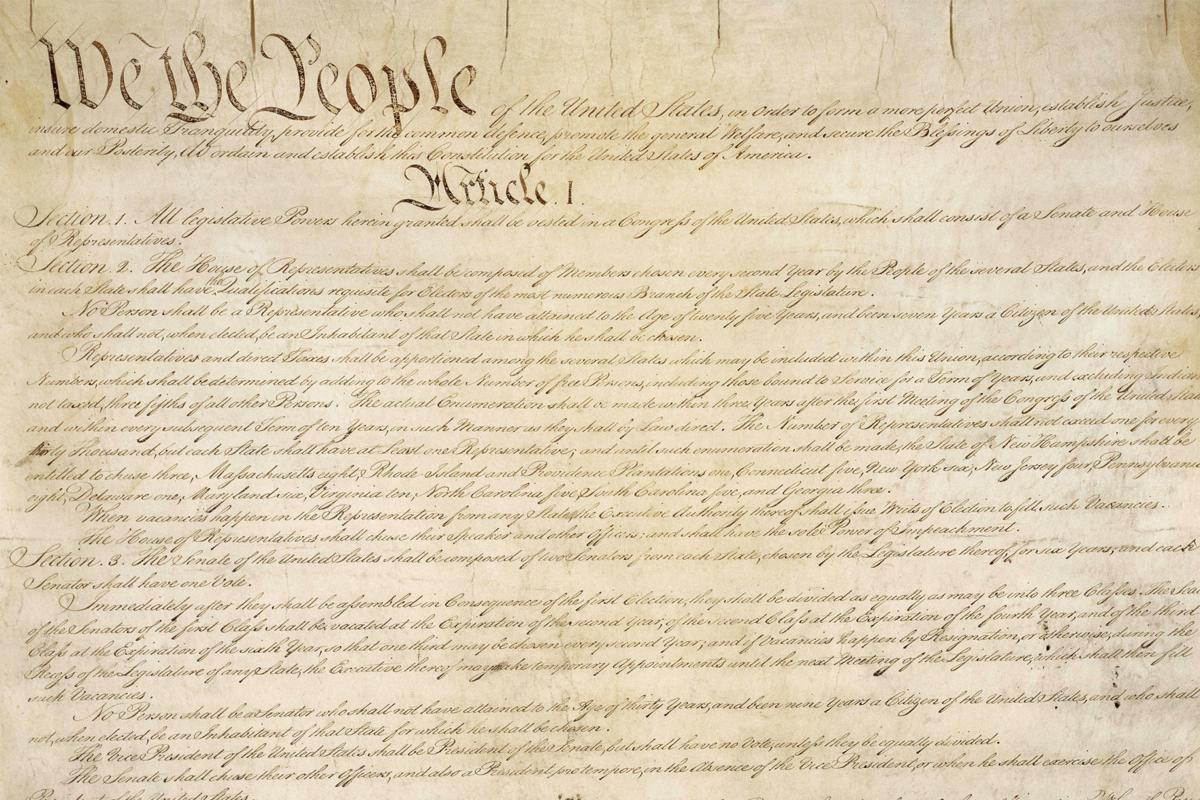 This photo made available by the U.S. National Archives shows a portion of the first page of the United States Constitution. 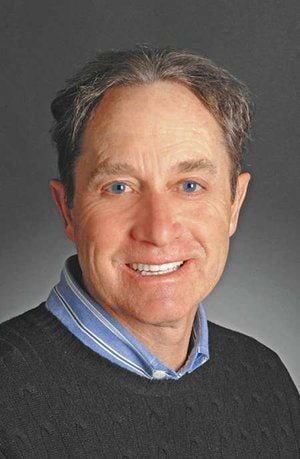 David Adler, PHD, is a noted author who lectures nationally and internationally on the Constitution, the Bill of Rights and Presidential power. His scholarly writings have been cited by the US Supreme Court and lower courts by both Democrats and Republicans in the US Congress. He can be reached at david.adler@alturasinstitute.com

Former President Donald Trump has been telling people that he expects to be “reinstated” as president, in August. The premise behind this theory, embraced by his MAGA supporters, is that President Joe Biden’s election victory will be overturned following Republican “audits” of election results in Arizona and Georgia.

This is no joke. Charles W. Cooke, Senior Writer for the conservative magazine, The National Review, has gone on record to attest to the accuracy of these reports.

“Maggie Haberman,” the New York Times reporter who broke the story about Trump’s claims, “is right,” Cooke stated. “I can attest from speaking to an array of different sources, that Donald Trump does believe that he is going to be ‘reinstated’ as president, alongside former Senators Perdue and McSally,” he added. “This isn’t ‘fake news’ or the product of a garbled telegram. I can attest to it myself.”

Cooke’s credentials as a leading writer for the National Review, the most influential conservative magazine in the nation and likely widely read in Wyoming, speak for themselves. And, when Cooke declares that Trump’s statements are not ‘fake news,’ but the real thing, it is time to take notice, and ask: Is there a constitutional mechanism to reinstate a president, other than through an election victory?

The answer, emphatically, is no. Indeed, there is no constitutional pretext, text or context to support former President Trump’s claim. In a word, his theory is without foundation in our constitutional architecture.

Nevertheless, let’s consider the merits of Trump’s contention as a purely constitutional exercise, in accordance with centuries-old principles of legal and constitutional interpretation, deeply embedded in Anglo-American legal history.

The starting point for analysis, of course, is the text of the Constitution. Article II—the “executive article”—provides the means by which the president is elected. Section 1 states the details for the implementation of the Electoral College, the sole constitutional mechanism for electing a president.

Article II of the Constitution declares the eligibility requirements—age, residency and citizenship— for someone seeking the White House. It is notable that it makes no mention whatever of a “reinstatement” mechanism for a former president.

The 25th Amendment to the Constitution, ratified on February 10, 1967, improved Article II by filling in details for succession to the presidency. It takes account of the removal of the president from office, as in cases of impeachment, or because of his death, resignation or inability to discharge the duties of the office. But, again, there is in this provision, no mention of any mechanism for the reinstatement of a former president.

In sum, the text of the Constitution does not contemplate a theory of reinstatement. Lacking a textual basis, we might ask, consistent with rules of constitutional interpretation, whether there was any mention of a reinstatement theory in the debates in the Constitutional Convention. Was there among the framers any flirtation with such a contention, anything in the train of discussion, or even a scintilla of evidence to support Trump’s claim? The answer is no. Trump and his MAGA supporters will search the records of the Convention in vain for supportive evidence.

We should add, for the sake of accuracy and thoroughness, that there is no mention of a reinstatement theory in the records of the state ratifying conventions, the Federalist and anti-Federalist papers, or other founding documents that might provide a sympathetic predicate for Trump’s theory.

Another facet of Trump’s assertion is the equally important question of who—what official, department or branch of government –- possesses the constitutional authority to implement the reinstatement? Who, in other words, is the implementer?

Obviously, a former president cannot reinstate himself, for that would represent a coup d ‘etat. But it would also be a coup if any constitutionally unauthorized governmental official attempted to reinstate a former president. There’s the rub for Trump’s theory. The Constitution provides no such enumerated or implied power, let alone an inferable basis, for the assertion of a congressional or judicial reinstatement power.

Even a wild hypothesis that purports to place in the judiciary authority to order reinstatement for a former president, on the premise of a fraudulent election, is blocked by a court’s inability to enforce its own decisions, as Alexander Hamilton observed in Federalist No. 78. In short, even the Supreme Court would lack authority to order the removal of President Joe Biden and the installation of Donald Trump.

Similarly, Congress has no authority to restore Trump to the presidency. The Impeachment Clause vests in the Senate authority to remove from office a president who has been impeached by the House, but there is no constitutional contemplation of either a House or Senate reinstatement authority.

The constitutional clauses and historical records afford Trump no support for his reinstatement argument. Nor is there support for his claim in the annals of Supreme Court rulings, across a vista of nearly 250 years. Trump’s contention lacks paternity.

How did we get here? How have we arrived at a moment in our history, when such a constitutional myth could be conjured by a former president, and enthusiastically embraced by his supporters who, apparently, believe it is credible?

The political motivations and calculations that lie behind Trump’s indefensible proposition remind us of the compelling need for an informed citizenry to protect the republic from corruptive myths that would, in Thomas Jefferson’s timeless phrase, convert the Constitution “into a thing of wax.”

David Adler, PHD, is a noted author who lectures nationally and internationally on the Constitution, the Bill of Rights and Presidential power. His scholarly writings have been cited by the US Supreme Court and lower courts by both Democrats and Republicans in the US Congress. Adler’s column is supported in part through a grant from Wyoming Humanities funded by the “Why it Matters: Civic and Electoral Participation” initiative, administered by the Federation of State Humanities Councils and funded by Andrew W. Mellon Foundation. Adler can be reached at david.adler@alturasinstitute.com

...after making offensive comments about the gender expression of a Wyoming man, Sissy Goodwin, Enzi sat down with him and had an open dialogue in which they came to a mutual respect. Unfortunately, that represents the minority of Wyoming’s leaders and does not equal legal protections or affirmation of rights.

Palmer: Wyoming may be too much like America used to be

... no one could have seen this coming. But we’re responding like rugged individualists: We’re going to sue the bastids.

LeResche: It’s past time to prepare for coal country’s future

LeResche writes: I can’t help but think we need better leadership to represent the interests of the people of coal country. We need state and local government and business leaders who will put miners and communities first and recognize today’s reality.

A Hacker's Brief: Avoid these scams

Has your phone been ringing? CyberWyoming warns about specific scams Wyomingites are experiencing.

From the first day of school as we head for the playground the teachers organize games to increase socialization. Many of those games are played by dividing into sides or groups. Then we are taught that the object of the game is for your group to do better at the game than the other group or groups. that is you must WIN.

Lenhart: A tale of two Wyomings

I am not advocating that we turn Wyoming into Colorado or Utah or anyplace else. Wyoming must stay Wyoming, but if we do not adapt, small town Wyoming and “urban” Wyoming may have very different futures.

Starry-eyed radicals in the 1960s and 1970s dreamed that they either were going to take over America or destroy it.

Thomas: In your heart do you believe Trump is right?

In the 1964 presidential campaign, Republican candidate Barry Goldwater had a slogan: “In your heart you know he’s right.”

Hanson: Why does the left seemingly hate Israel?

With more than 3,000 rockets having been fired into Israel by Hamas recently, the Democratic Party seems paralyzed over how to respond to the …

This photo made available by the U.S. National Archives shows a portion of the first page of the United States Constitution.

David Adler, PHD, is a noted author who lectures nationally and internationally on the Constitution, the Bill of Rights and Presidential power. His scholarly writings have been cited by the US Supreme Court and lower courts by both Democrats and Republicans in the US Congress. He can be reached at david.adler@alturasinstitute.com