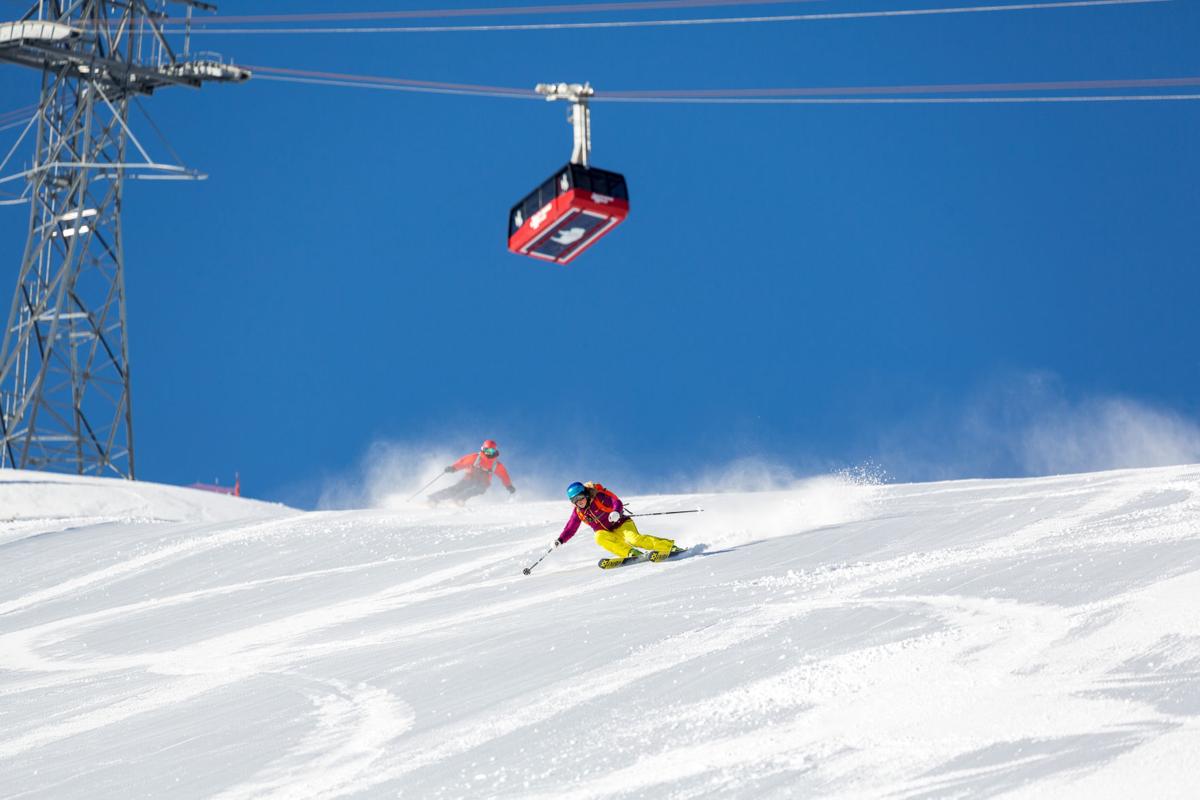 A skier turns down a hill at Jackson Hole Mountain Resort while the resort's iconic tram moves overhead. The tram was one of resort president Jerry Blann's largest projects. He plans to retire at the end of this ski season. 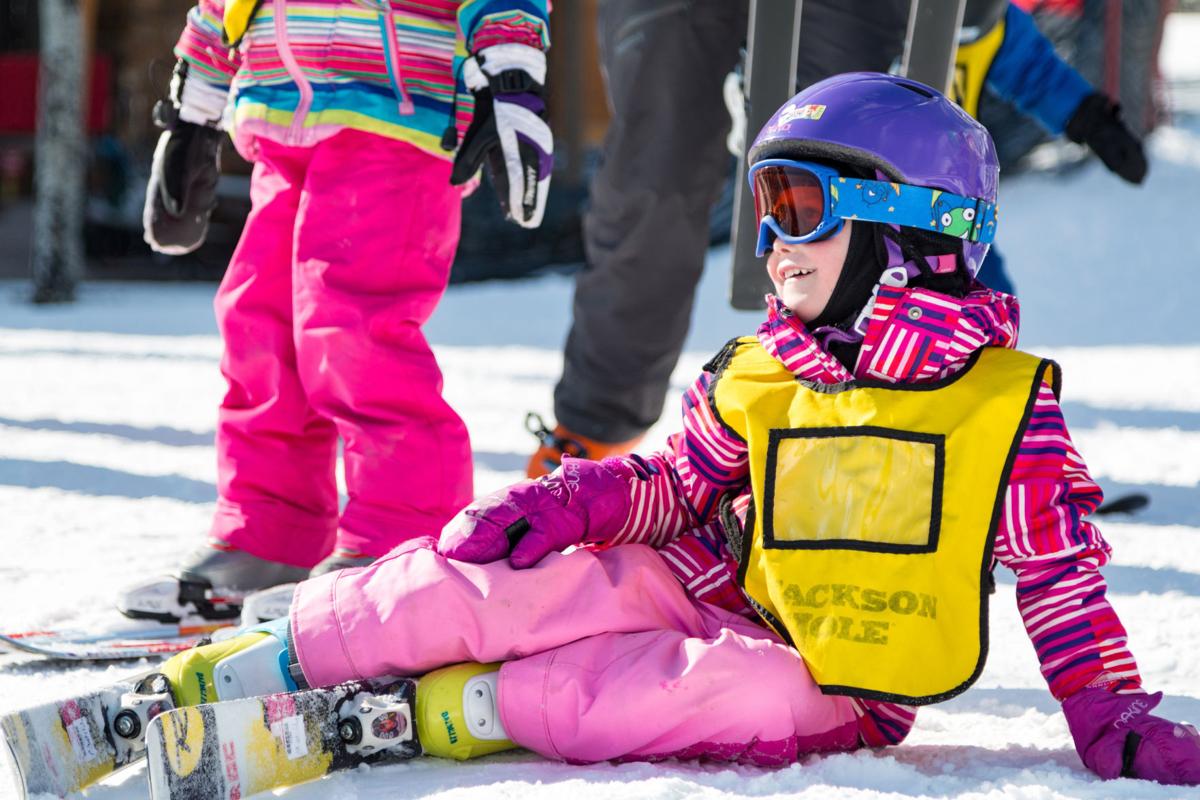 A child rests during ski lessons at Jackson Hole Mountain Resort. Known for being a big, tough mountain, the ski area is trying to increase its accessibility to beginner skiers. 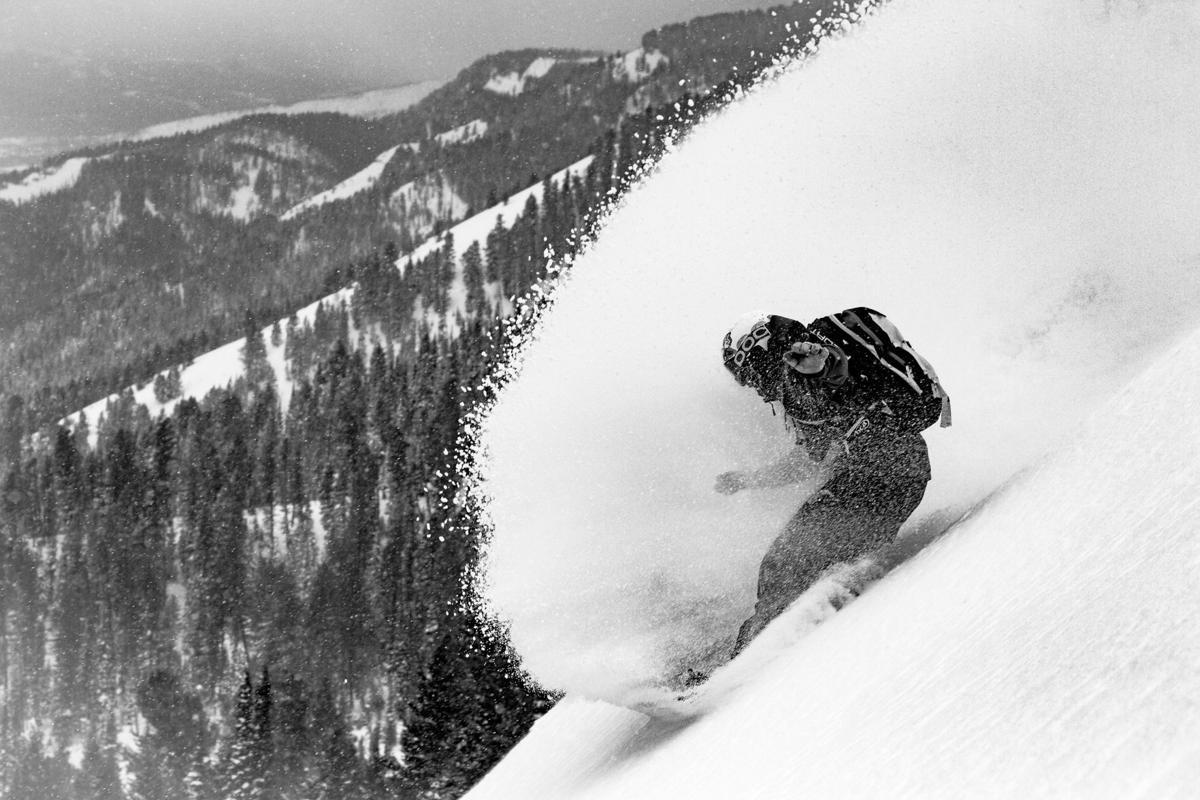 A snowboarder cuts down a steep slope at Jackson Hole Mountain Resort. The resort's president, Jerry Blann, is retiring after 22 years. In his tenure, the resort was named top in the country by Ski Magazine and Forbes and nearly tripled visitation. 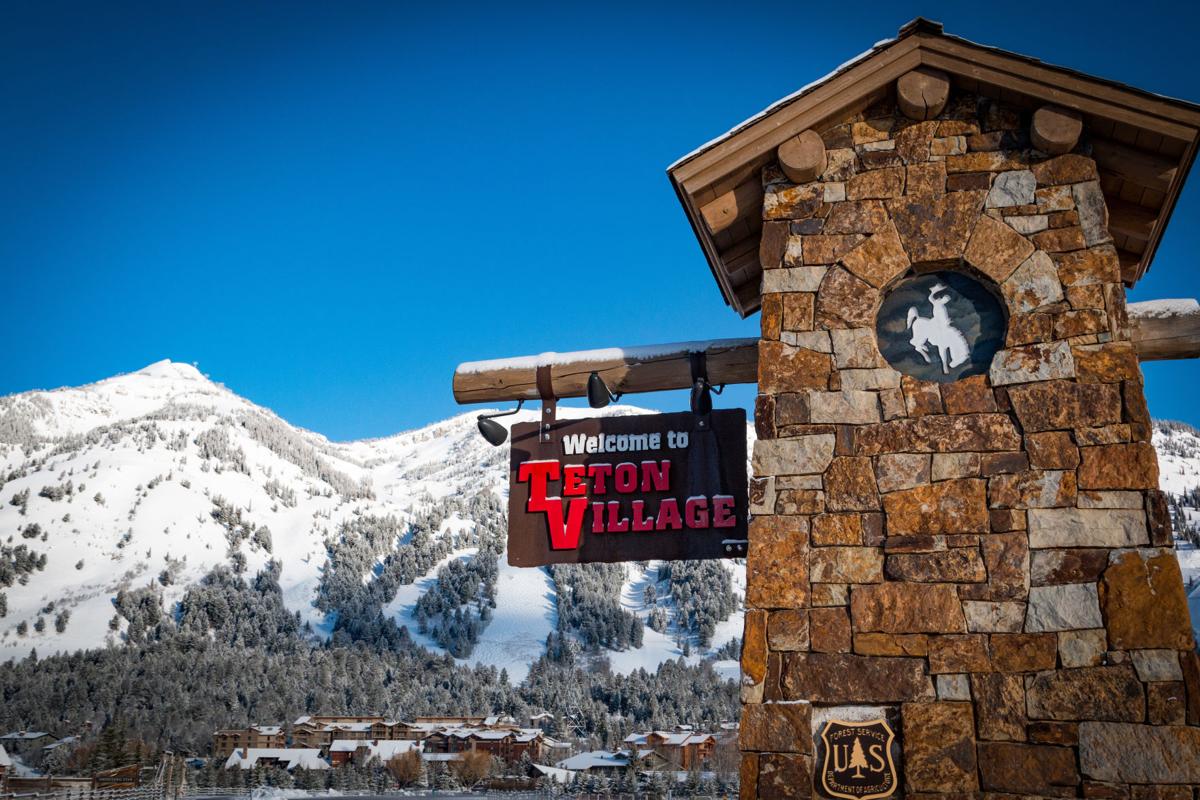 A sign marks Teton Village near Jackson Hole Mountain Resort. The resort's president, Jerry Blann, is retiring after 22 years in which he helped shape the resort and surrounding area. 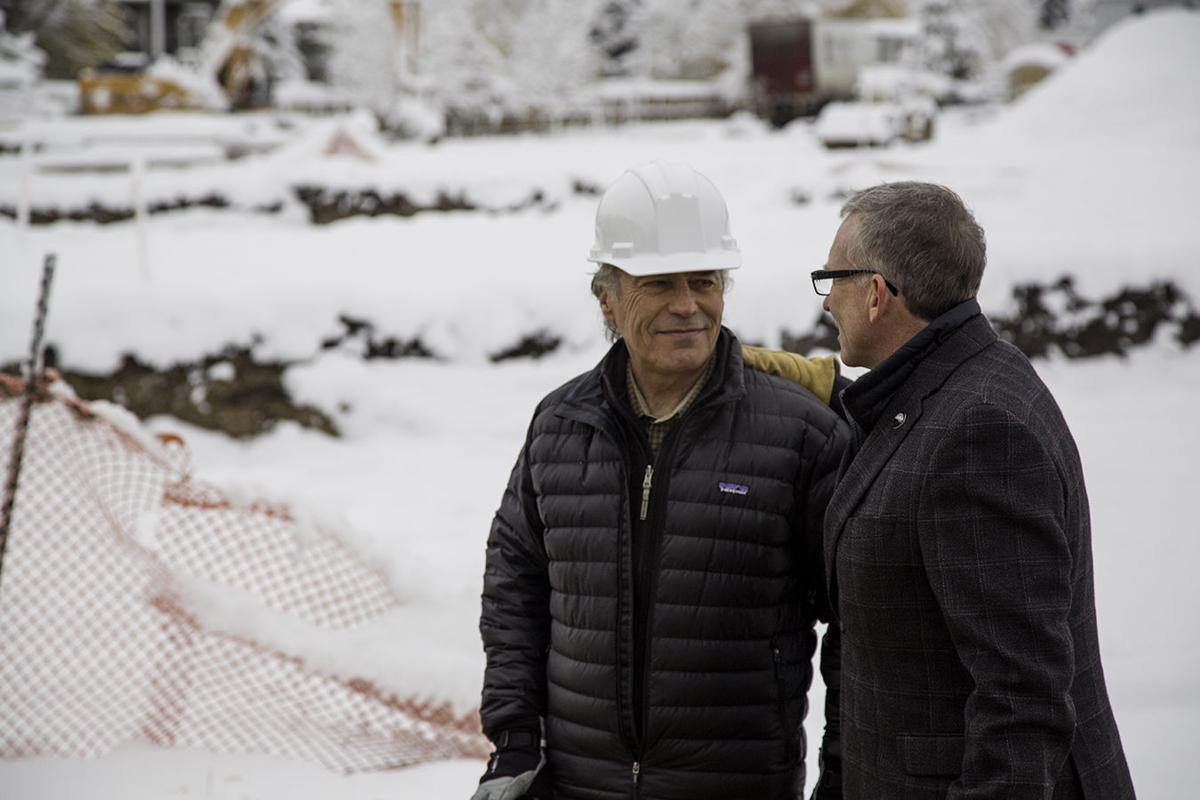 When Jerry Blann started as Jackson Hole Mountain Resort’s president in 1995, the resort’s new owners were “assessing what they had purchased.”

It didn’t take long for Blann to help form a vision. And what came next, over the following 22 years, would be more than $200 million in improvements, hundreds of thousands of additional guests each year and soaring rankings in skiing magazines.

“Looking across the ski resort landscape very few places have had the incremental success that Jackson Hole Mountain Resort has had under Jerry’s leadership,” said Michael Berry, president of the National Ski Areas Association. “The mountain improvements, greater accessibility and much more visibility in the market place have allowed Jackson to increase visitation in a way that has caught the attention of his peers.”

But after more than two decades running the ski area, and many years before that at resorts across the West, Blann is retiring. He wants to spend a little more time enjoying what he helped transform, he said.

Before he leaves at the end of the 2017-2018 season, the Star-Tribune caught up with him for a wide-ranging talk about the resort’s early years, its future and the ski industry in general.

Casper Star-Tribune: When was the first time you visited JHMR?

Blann: I came skiing here in 1972-73 … The mountain was always the mountain. I always like to say in my orientations or presentations to, particularly, the new employees... I say the mountain hasn’t changed, but all we’re servicing it the best we can.

CST: You come from a ski family, did you feel you were always destined to manage a resort?

Blann: I don’t think anybody intends to manage a resort. I didn’t intend to do that. I went to the University of Denver on a ski scholarship. Three out of the four years I was at DU, we won NCAA. I was All-American one year and captain of the ski team. And it came to the end of our senior year, and I started interviewing with various companies, and I wasn’t very jazzed by the Dow Chemicals of the world. I had a business degree, and I put a couple of notes together and sent it to Aspen and Vail. Aspen responded almost immediately and a week later said we have two management trainee positions coming up, would you like to come up and interview? And I got the job because I had been in the industry, and I truly understood it...

That’s how I got my start. I hadn’t really thought much about it, but knew what I was about to jump into was fairly familiar to me at least with the knowledge base.

CST: Jackson is notoriously difficult. But it seems like you’ve recently been investing in developing easier terrain, why?

Blann: For the last over 10 years, particularly with terrain off the gondola, we’ve been trying to tame the mountain a little bit. We are building this new family initiative construction, three buildings that will be entirely for new skiers… This is one of the last places on our mountain, which is pretty constrained, is right at that break point, and that’s where this mid station is.

…People like a lot more groomers, and so we’ve invested heavily in groomers. We have 11 now that are full time, two shifts a night that we run. Fifty percent of them are winch cats because of the steepness. We are winching and grooming terrain that most resorts are not, which allows many people to have a better experience throughout the time they’re here.

It’s been known as a high testosterone ski experience for quite a long time. It was the January guy’s trip, you know? Everyone comes and says ‘Oh I went to Jackson Hole.’ It was a feather in their cap.

… The mountain didn’t change, but we maximized all of our intermediate terrain in particular.

CST: Downhill skiing participation is flat, what can be done?

Blann: It’s a difficult sport. Everybody knows it’s an expensive sport... We try and break it down into packaging, particularly for people who are new to the sport. It’s easier for the industry to do that with feeder resorts, etc., but the other part of why skier visits are flattened is because there’s been a lot of those small ski areas go out of business.

Last year, you may remember, we helped offer the Wyoming Ski Safety Act for all 10 ski resorts here, ski areas in the state. If you think about Wyoming, it is classic with the 10 ski areas. You have the Hogadons and Sleeping Giants and you get these great ski areas … but those are very important feeders and one of the reasons we took that on is so that these areas don’t get hit by a lawsuit and have to fold. That could have been a logical conclusion if we hadn’t passed that bill.

CST: There’s a growing focus on summer activities. Do you think summer use could become what winter use is, and could it be an answer to the smaller areas?

Blann: In some instances it can be a partial answer. For us, with 4.5 million plus people coming through here (in the summer) we have an ideal opportunity to capture them for a short period of time. We have been very careful what to launch. The Via Feratta is a good example. It’s so brand right. It’s western. It’s a mountain experience. It’s not a carnival environment, that kind of thing. So that’s what we’re sticking with. We do a lot of studies with the research organization that does most of the history, and we’re right at the highest in terms of revenue for summer versus winter, but it’s never going to be, it’s never going to be what winter is. It’s much more capital intensive. It’s much more labor intensive.

It will never really compete. But is there some nice little sundry businesses that might be weddings at some of these great little ski areas? Yes, absolutely.

Blann: No question. I was chairman of the National Ski Area Association environmental committee for approaching 10 years, and that was one of our key issues there, was to, one, educate our membership, but two, really try and lead to do not just the big ideas, but the right things in the environment.

That was one of our core ideas on the mountain... to be an ambassador in guest services. Be green in the environment. It’s be safe and then have fun. Those are our core values. We keep those out in front.

When we did the master plan back in 1995-1998, one of the things we obligated Teton Village to do was commit to putting all our employees on a bus. We buy all of our employees bus passes and that was not only the mountain resort, but Teton Village, which is managed by the Teton Village Association... None of us want to see more roads and more CO2 going in the air...

You do the typical things of energy conservation and recycling. We’ve been doing all those things for 10 to 15 years and have been awarded the industry’s top award for environmental conservation on two different occasions and gotten the silver eagle which is the next one down on environmental management.

CST: Do you think there’s a place for lobbying on climate change to work on national policies?

Blann: Here’s where I sometimes diverge from some of the more aggressive folks in the industry. We try to do what is the right thing to do here. At the governor’s economic forum, I got them at the time to bring in a carbon tax guy to talk about what that might look like in a state like Wyoming, and it actually changed some ideas and thought processes in our state. I’m not going to Washington and putting a sign over my shoulder and doing that, but when John Barrasso comes here, or Mike Enzi or Liz Cheney, we let them know the importance of advocacy.

We’re members of Protect Our Winters, which is an advocacy group which does lobby a lot more. I’m not going to be the most aggressive out there. I realize what our economic foundation is on our state, and respect it.

CST: Could tourism offset our boom and bust cycles?

Blann: In terms of smoothing out the boom and bust cycles, yes. I think it can. And as I said we’ve got wonderful natural resources which are tremendous. How to manage the impacts of all of that are something we need to get better at. Should the parks be working on transportation, the kinds of things they need to be responsible for in the summer? My answer is going to be yes. But those natural resources are very, very, very important. We can’t restrict access because those assets are our assets. They’re the broader community assets, and so I think developing those to a better degree and legitimately creating destinations for people in Jackson to can come and spend money and get to understand our communities in multi-day stays is key in my opinion.

CST: What are you most proud of in your 22 years?

Blann: The organization and evolution of the mountain. Those are the key ones. The staff that I leave behind, top in the industry. They could go up against any resort, and have, as well as the improvements and where Jackson has come from 1995 to today. It’s like night and day. I think it’s become a much more important player in the state tourism dialogue...

CST: Will you ski more?

Blann: Absolutely. And I’m looking forward to this season. We’re off to a great start.

A skier turns down a hill at Jackson Hole Mountain Resort while the resort's iconic tram moves overhead. The tram was one of resort president Jerry Blann's largest projects. He plans to retire at the end of this ski season.

A child rests during ski lessons at Jackson Hole Mountain Resort. Known for being a big, tough mountain, the ski area is trying to increase its accessibility to beginner skiers.

A snowboarder cuts down a steep slope at Jackson Hole Mountain Resort. The resort's president, Jerry Blann, is retiring after 22 years. In his tenure, the resort was named top in the country by Ski Magazine and Forbes and nearly tripled visitation.

A sign marks Teton Village near Jackson Hole Mountain Resort. The resort's president, Jerry Blann, is retiring after 22 years in which he helped shape the resort and surrounding area.