View of Absaroka Range from Eagle Peak, Wyoming, toward the southwest. 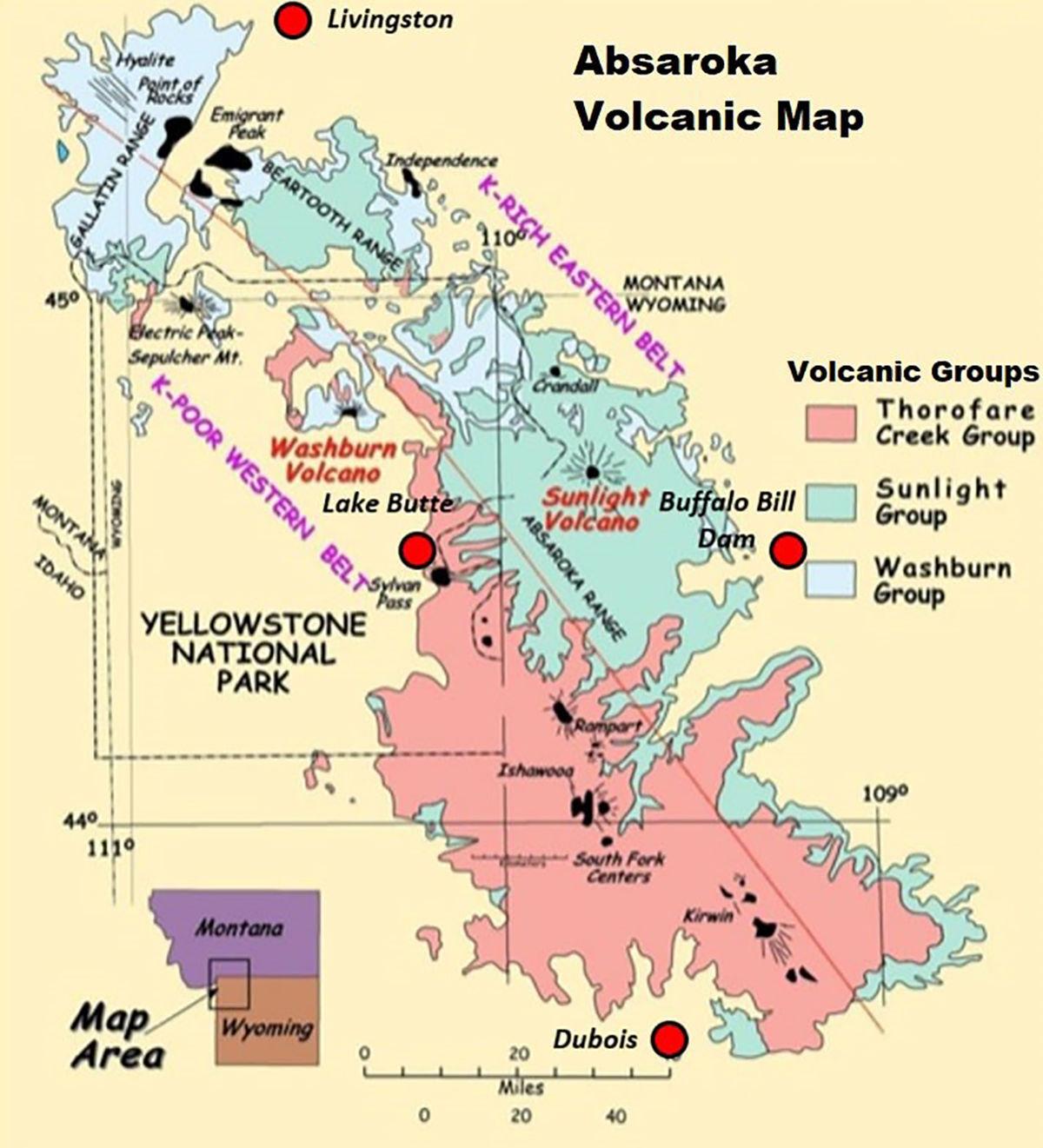 The Absaroka volcanoes were active 53 to 43 million years ago, after the uplift of the Rocky Mountains but before the geologically recent arrival of the Yellowstone hotspot about 2 million years ago. Comprising the park’s eastern boundary and running 165 miles in length between Livingston, MT, and Dubois, WY, and 60 miles across from Lake Butte Overlook in the eastern quarter of Yellowstone National Park to Buffalo Bill Dam in Wyoming, the modern-day Absaroka Mountains are the remnant of an even more massive volcanic field. The combined volume of material from Absaroka volcanoes (>29,000 km3 [>7,000 mi3]) exceeds that of the Yellowstone Plateau (<4,600 km3, [<1,100 mi3]) several times over. Yet, the Absaroka Volcanoes are relatively overlooked in comparison to Yellowstone. In fact, geologists long believed that Absaroka volcanics were a component of Yellowstone volcanism. Then, a graduate student in the 1950s discovered that Absaroka volcanism preceded that of Yellowstone by over 50 million years.

Perhaps the most notable difference between Yellowstone and the Absaroka volcanics is their starkly different topography. Yellowstone is a caldera-forming system, where subsidence of the ground, deposition of ash, and emplacement of lava flows contributed to sweeping landscapes. The Absarokas, however, are comprised of several volcanic centers with lava flows, solidified magma, and overlying sedimentary rocks subsequently eroded by wind, water and ice over tens of millions of years. This rugged range hosts 123 peaks over 3,500 m (11,500 ft), 47 of which are over 3,700 m (12,000 ft). Hence, it is of little surprise that Mt. Washburn, the most-visited peak in Yellowstone National Park above 3,000 m (10,000 ft), and Eagle Peak, the highest point in the park at 3,465 m (11,371 ft), are remnants of Absaroka volcanoes.

Differences in topography and elevation between Yellowstone and the Absarokas directly contribute to the different attention they receive. The lower elevation and flatter terrain in much of Yellowstone National Park lend toward greater accessibility to study its natural wonders compared to the Absarokas. Moreover, most of the Absaroka volcanoes fall within designated national wilderness, where roads are prohibited and low-level air travel is permitted only for emergencies. Add that the Absaroka volcanoes have not been active for over 40 million years and it becomes easy to understand why Yellowstone grabs most of the attention.

This is not to say that the Absaroka volcanoes are not worthy of study. The sediments of the Absarokas contain fossils that provide a window to observe the flora, fauna, and climate from several million years ago. For example, petrified trees are preserved in Absaroka mudflows. The Absarokas also offer a means to traverse dissected volcanic complexes and understand processes still underway today. For example, this environment provides a natural laboratory to study volcanic landslides. Heart Mountain experienced the world’s largest above-water landslide 48.9 million years ago. What can we learn from this event? How can we increase public safety and design more robust infrastructure in volcanic ranges? In 2004, Yellowstone National Park was forced to close its east entrance after a landslide inundated the road at Sylvian Pass. What are the similarities between the landslides at Heart Mountain and Sylvian Pass? What factors contributed to these events? Can we learn anything about the likelihood of reoccurrence at Sylvian Pass from Heart Mountain or other Absaroka volcanoes?

The origin of the Absaroka volcanoes remains a subject of study. The chemistry of Absaroka lava and ash is usually associated with plate boundaries that produce volcanic arcs, where one plate subducts beneath another (like beneath the Cascades, Andes, and Aleutians). However, the Absaroka volcanoes are nearly 1000 miles, seemingly too far, from the nearest subduction zone. An alternative explanation is that the Absarokas were produced during a period of regional extension, in which magma was brought to the surface by a process known as decompression melting as tectonic forces pulled the land apart (see 1999 Hiza dissertation in Further Reading). However, regional extension is not usually associated with the volcanic rock chemistry observed in the Absarokas. Suffice it to say, additional studies would benefit our understanding of the region and lend credence to the origins of the Absaroka volcanoes.

Yellowstone Caldera Chronicles is a weekly column written by scientists and collaborators of the Yellowstone Volcano Observatory. This week’s contribution is from Stanley Mordensky, visiting scientist at Yellowstone National Park.

Yellowstone Caldera Chronicles is a weekly column written by scientists and collaborators of the Yellowstone Volcano Observatory. This week's contribution is from Stanley Mordensky, visiting scientist at Yellowstone National Park.

Biologists change handling procedures in the field to prevent the possible spread of COVID into Wyoming’s wildlife populations.

No cases of COVID in wildlife have been found yet in Wyoming. But it’s with black-footed ferrets and other sensitive species that Game and Fish officials began reconsidering their protocols for handling wildlife in the field.

View of Absaroka Range from Eagle Peak, Wyoming, toward the southwest.