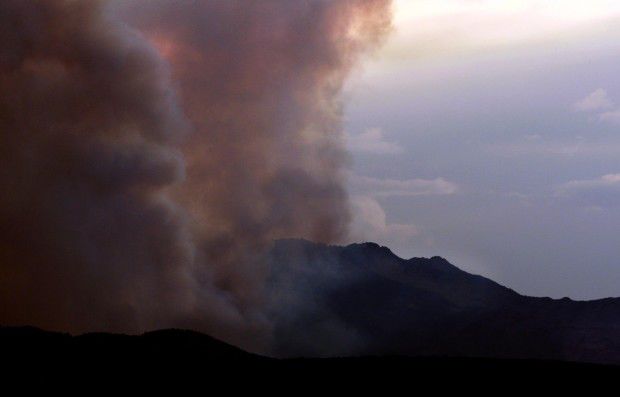 Smoke rises from the Arapaho fire in the Laramie Peak area of Medicine Bow National Forest in 2012. 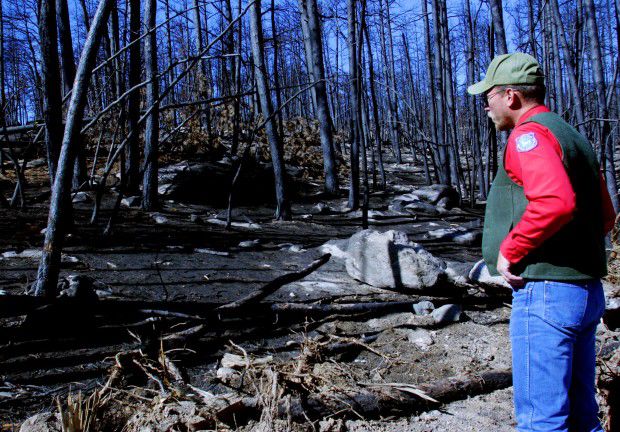 Ryan Amundson, a Wyoming Game and Fish Department habitat biologist based in Wheatland, shows part of the burned area from the Arapaho Fire. The Arapaho Fire burned nearly 100,000 acres, the state’s worst fire in 2012. 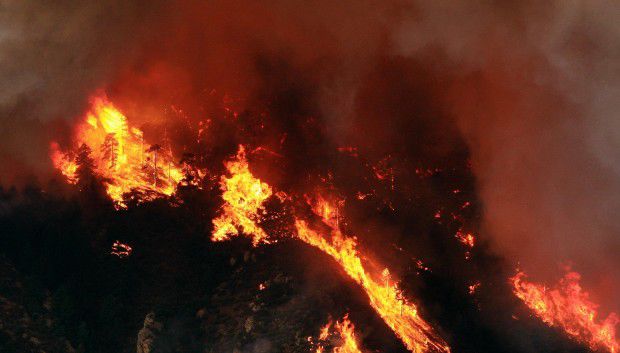 Wildfires ravaged forests and grasslands in nearly every portion of the state. Temperatures were in the triple digits. Portions of northeast Wyoming hadn’t seen significant amounts of rain in months.

Then a damaged power pole fell on a tree in the Black Hills, and embers tumbled to the ground.

Strong winds fanned the sparks that spread into a fire that burned hot and moved quick. More than 500 firefighters battled the growing blaze. As it tore south, officials put Newcastle – a town of 3,400 nestled in the juniper and ponderosa pines at the base of the Black Hills – on evacuation notice. Conditions were changing every hour.

“It was a busy summer, and resources were really thin. They tried to make fire lines, but embers blew across,” said Dick Terry, Wyoming State Forestry’s northeast district forester. “It was pretty much out of control for a full week.”

But as the blaze moved toward Newcastle, it ran into a fire break, an area thinned of underbrush and crowded trees to help in exactly that situation. The distance between treetops prevented flames from jumping from one dry branch to another. The lack of low bushes kept the fire from licking up into the forest ceiling.

It gave firefighters enough time to build a line and burn the fire back. Then the wind switched direction, and Newcastle residents breathed a collective, if cautious, sigh of relief.

“Anything’s possible, but the odds greatly increased having that fuel work there,” Terry said. “It’s definitely possible it could have gone into Newcastle.”

The fire break that is given at least some credit for saving the northeast Wyoming town was paid for by the Bureau of Land Management and the National Fire Plan, a federal pot of money intended to help prevent fires where forests and urban areas meet. Communities across the West depend on those types of grants from D.C. to cover expensive fire remediation projects to protect homes and towns, Terry said.

And it’s the federal budget that officials like Terry and Bill Crapser, Wyoming’s state forester, are worried continues to shrink. President Donald Trump’s proposed budget includes a 21 percent cut to the U.S. Department of Agriculture, which oversees the U.S. Forest Service, and a 12 percent cut to the Department of Interior, which controls the Bureau of Land Management.

At a time when budgets for pricey forest remediation projects were already running thin, and the West is growing ever hotter and drier, fire officials worry additional cuts could mean bigger and more destructive wildfires are not a matter of if, but when.

Wildfires need three things to grow: oxygen, heat and fuels. In firefighting classes, it’s presented as a triangle — get rid of one of those elements, and you stop the fire. And out of those three, fuels is the only one humans can control.

That’s why fire officials laud forest remediation projects as one of the keys to stopping major blazes, especially at a time when small fires have been suppressed for a century.

“It makes a huge difference,” said Crapser, the state forester. “If you look at the Lava Mountain fire by Dubois this summer, the Union Pass area, folks had done a lot of thinning and defensible space around their homes, and it made a huge difference in firefighters’ ability to help save their homes.”

The U.S. Forest Service has numbers to back up anecdotal evidence. The agency has analyzed 1,400 projects since 2006 and found that thinning “hazardous fuels,” which includes things like underbrush and small trees, was 90 percent effective in reducing the cost and damage of wildfires, Mike Ferris, an emergency management specialist with the Forest Service, wrote in an email.

In practicality, fire remediation, or hazardous fuels removal, is cumbersome and expensive. About 7 percent of the Forest Service’s current annual budget is earmarked for prescribed fires, mechanical thinning and other remediation, Ferris noted. That’s about $374 million of a $5.6 billion budget. While the budget has been largely increasing for the last decade, it was $1 million lower this year than in 2016.

Even in a forest like the Black Hills, where there’s a market for the timber, clearing out underbrush and young trees and leaving enough trees to still resemble a healthy forest can cost up to $1,000 an acre, said Terry, the regional forester.

And in the Black Hills, where a disproportionate amount of the forest is privately owned, that kind of work just isn’t possible without federal grants.

But fighting big fires is even more expensive, not to mention the destruction. The Forest Service spends about $1.6 billion, or 29 percent, of its annual budget on fire suppression.

Sen. John Barrasso, chairman of the Environment and Public Works Committee, said he wants agencies to be able to “prioritize active management to prevent these catastrophic fires.”

“… I place a high priority on forest management across the West. Catastrophic fires compromise air and water quality, displace people and wildlife and threaten critical infrastructure,” he wrote in an email to the Star-Tribune. “I’ll continue to look for opportunities to support legislation and policies that address fire borrowing long-term and provide real reforms to how we manage our national forests.”

Locals like Terry and Crapser are keeping an eye on Trump’s proposed budget. While details are scarce right now – and the budget needs to be approved by Congress before becoming official – they are nervous.

“I think from what we’ve seen so far, probably the availability of federal funds for fuels work will be harder and harder to find,” Crapser said. “Then there will be less and less work on the ground with less money.”

While this winter has been one of the wettest in Wyoming’s recorded history, periods of hot and dry weather are likely to follow, caution climatologists.

Wyoming has become about 1.4 degrees Fahrenheit hotter since the early 20th century, according to the National Oceanic and Atmospheric Administration’s Centers for Environmental Information.

“This increase is most evident in winter warming, which has been characterized by a below average occurrence of very cold days since 2000,” the site reads.

Maybe even more important than hotter days are warmer nights, he added.

“The very warm nights is actually a very important factor in the drought and fire business,” Brown said. “If the nights stay warm, that also means they’re staying drier, and that further dries out the fuels.”

And an increase in spring precipitation will grow more grasses, which could result in more fuels to dry and burn in the summer, he added.

The answer is complicated, he said, but probably.

“You still have to have ignitions,” Brown added. “And the ignitions come both naturally from lightning and humans. They’re both very difficult to predict on a long-term level.”

The Oil Creek Fire, which ultimately burned more than 62,000 acres of forest northwest of Newcastle, was human caused. A fire investigator found the ignition to be a damaged power pole owned by what was then called Black Hills Power – now Black Hills Energy, according to the Associated Press.

A lawsuit filed by 87 plaintiffs accused Black Hills Power of being negligent and hiding evidence. The company denied the allegations, and the case was settled out of court, the AP reported.

The fire was one of 1,300 that ripped across Wyoming five years ago. The Arapaho Fire near Douglas burned about 100,000 acres and consumed about 90 buildings. The Sheepherder Hill fire on Casper Mountain burned 5,000 acres and destroyed 37 structures.

It was the most expensive fire season – costing state, local and federal agencies $90 million.

Since then, the state has had wetter springs and summers, though scars from catastrophic fires such as the Cole Creek Fire, which displaced 1,300 people near Casper, and the Lava Mountain fire near Dubois, still mar the landscape.

Crapser doesn’t know what this summer’s season will bring. After years as the state’s forester, he’s stopped trying to predict.

Fires have already cropped up in the Bighorn Mountains and in the grassland near Cheyenne.

“We’ve seen probably more large fires in the last 15 years than we’ve seen before that,” Crapser said. “West-wide, we’re seeing more fires and more extreme fire behavior than we’ve seen in the past.”

Fed by bone-dry timber and fanned by hot winds, the four major wildfires burning in Wyoming today have destroyed an unknown number of building…

Newcastle residents are on high alert as the town sits between two wildfires.

Smoke rises from the Arapaho fire in the Laramie Peak area of Medicine Bow National Forest in 2012.

Ryan Amundson, a Wyoming Game and Fish Department habitat biologist based in Wheatland, shows part of the burned area from the Arapaho Fire. The Arapaho Fire burned nearly 100,000 acres, the state’s worst fire in 2012.