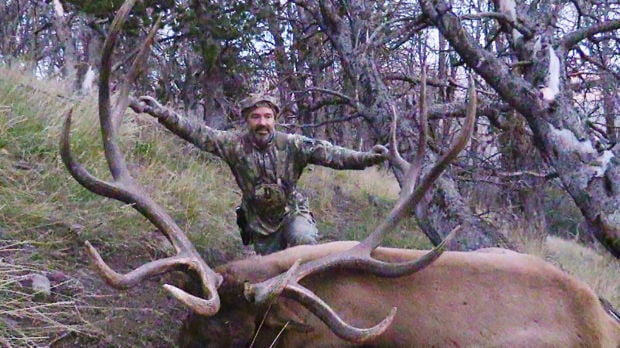 Albert Henderson, of Burlington, bagged a world-record bull elk with a crossbow in the Shoshone National Forest in September. 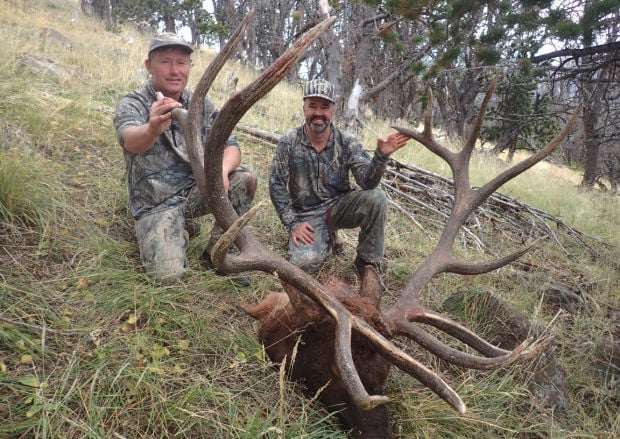 Albert Henderson, right, of Burlington, bagged a world-record bull elk with a crossbow in the Shoshone National Forest in September.

Albert Henderson’s rural Burlington house may be too small to showcase his new and only elk mount.

The animal's head and shoulders stand about 6.5 feet from its chest to the tip of its antlers. Its rack is more than 4 feet wide.

But he may not need to find room anytime soon. The mount has spent the past several months shuttled between sportsmen’s stores and banquets, and it may soon find a spot on the Rocky Mountain Elk Foundation’s 2016 tour.

Why all the fame? Henderson’s elk, shot Sept. 17 near Dubois, made the record books as the largest one killed with a crossbow. Ever.

The recording is through Safari Club International, a major scoring organization that includes a crossbow category.

A crossbow can shoot farther than a typical compound bow, but not nearly as far as a rifle.

Under Boone and Crockett, another scoring system, which ranks all animals killed by rifle, bow and other methods, the elk places in the top 5 percent, according to the Wyoming Game and Fish Department.

It was Henderson’s second elk with a crossbow that he borrowed from a friend. He also shot it on public land at a time when some people believe record-setting bulls are a thing of the past.

Henderson, 49, hadn’t even planned on hunting in a general tag area near Dubois when he applied for licenses last year. He usually tries for a limited quota area outside Meeteetse, but he didn’t draw a tag.

“It’s pretty rare to see elk like that anywhere in the state, and probably more rare in general areas. Usually in general areas, you have a few less elk and a few more people,” Henderson said. “That’s why you go out and work so hard for that chance.”

He didn’t register the bull’s sheer size when he shot, as he was too busy crawling through pine needles and grass on his hands and knees.

The friends left the younger hunter to clean his bull and went after others bugling in the distance.

They found one standing in trees surrounded by cow elk. Then off to their right they spotted another one, rubbing his massive antlers on a tree.

“We forgot the 350 bull and went straight after this one,” Henderson said, referring to a score of the smaller bull. “We didn’t get a really good look at him but knew he was big. We knew he was bigger by quite a bit.”

Henderson stalked, and the bull meandered in a backcountry game of cat-and-mouse. At 61 yards, Henderson used his cow call, and the bull stopped moving. He shot. The bull ran for 120 yards and toppled over.

When he took it home and tried measuring it, he realized it could be a record. A taxidermist confirmed his theory, and a master measurer -- the only one who can officially declare a world record -- tallied his final score of 426 1/8 inches.

Henderson’s story gives people hope for trophy elk of their own, said Gray Thornton, president and CEO of the Wild Sheep Foundation, who measured Henderson’s elk.

“Just to know there are those types of elk roaming around on public land is really heartening,” Thornton said. “And anyone can do it.”

Henderson ultimately decided to pay for a full shoulder mount. He’s hunted his whole life, leaving school for a week each fall with his parents even as a kindergartener.

Big bulls are a fun and challenging hunt, but mounts tend to be expensive.

This one was different, he said.

Now if he can find a place big enough for a display.

Albert Henderson, of Burlington, bagged a world-record bull elk with a crossbow in the Shoshone National Forest in September.

Albert Henderson, right, of Burlington, bagged a world-record bull elk with a crossbow in the Shoshone National Forest in September.