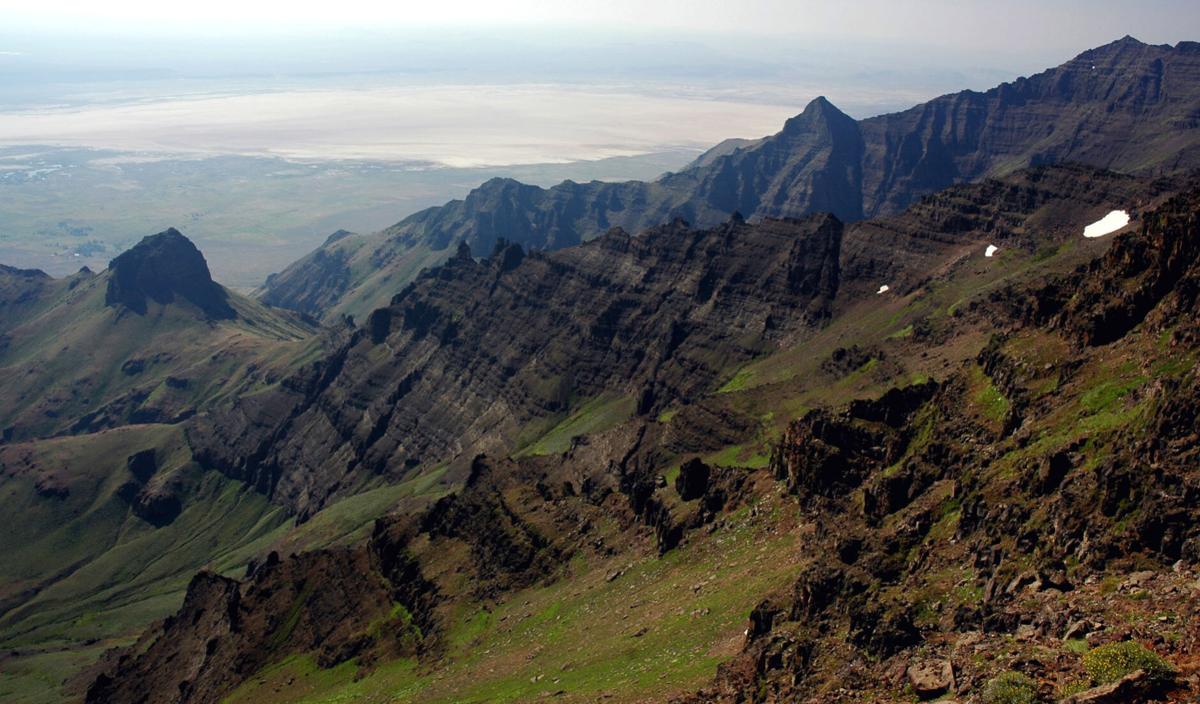 Looking southwest from the Steens Mountain summit area into the Alvord desert of eastern Oregon. This fault-block escarpment reveals the oldest lava flows of the Columbia River Flood Basalts, which erupted about 17 million years ago. Three or four vertical dikes that feed these flows are evident in the midground ridge where they stand as rock walls cutting across the horizontal lava flows. The Steens Mountain eruption site is one of many volcanic provinces generated along the Yellowstone hotspot track. 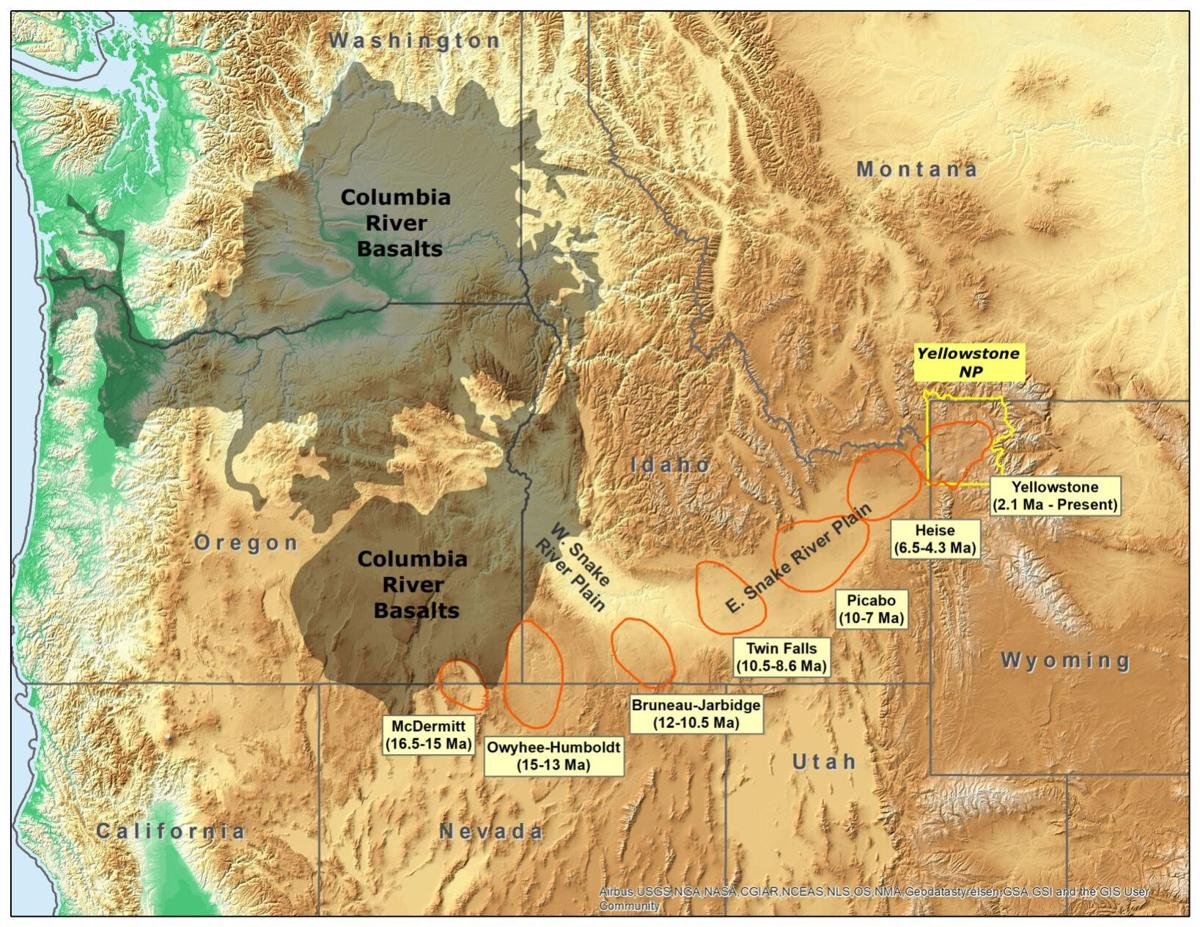 Yellowstone sits above a melting anomaly within the earth called a “hotspot.” This hotspot is powered by a plume of hot (but not molten) material that may extend as deep as the boundary between the planet’s mantle and core. As hot material rises buoyantly, it decompresses and melts near the surface, generating magma that feeds the magma chambers beneath Yellowstone and provides the heat that powers the many geysers and hot springs.

The hotspot is stationary relative to the moving tectonic plates that make up Earth’s surface. As the North American plate moves to the southwest over the hotspot, the center of volcanic activity therefore appears to be migrating to the northeast. There is thus a trail of volcanism that stretches to the southwest from present-day Yellowstone across the Snake River Plain of southern Idaho, getting progressively older along the trend. These older volcanic centers are essentially ancient Yellowstones, and some were responsible for especially powerful eruptions. The start of the trail is the 17-million-year-old McDermitt volcanic system and similar-age volcanism in northern Nevada and southern Oregon.

Yellowstone-style volcanic eruptions weren’t the only thing happening 17 million years ago. That time period also saw the eruption of the Columbia River Basalt — a tremendous outpouring of lava from vents in eastern Oregon and Washington and western Idaho. The lava from these vents flowed all the way to the Pacific Ocean and is responsible for some of the impressive features along the Oregon Coast, like Haystack Rock and Cape Lookout.

For many years, it was assumed that the Columbia River Basalt eruptions represented the start of the Yellowstone hotspot. The first eruptions of a hotspot would likely be voluminous, since the head of a mantle plume would be charged with heat and induce tremendous melting. And there were no obvious signs of older volcanic systems to the southwest of the McDermitt-age volcanic centers — the trail essentially went cold. A growing body of evidence, however, suggests that the Yellowstone hotspot was active before that time and is far older than previously thought. In fact, it probably initiated well off the coast of North America.

Preserved in the coastal mountains of Oregon, and Washington is evidence of massive volcanic eruptions that occurred offshore about 50-55 million years ago. Some of the lava from these eruptions was scraped up and welded onto the North American coastline by subduction, and still more exists on the ocean floor offshore of the Pacific Northwest. This so-called Siletzia terrane has chemical and physical characteristics that suggest it formed due to a mantle plume, and it has a composition similar to the Columbia River Basalts, indicating that the two large lava flow provinces are related. Might the Siletzia terrane have formed due to an early version of the Yellowstone hotspot?

If this is true, then the North American continent would have begun to override the hotspot about 40 million years ago. Sure enough, there are volcanic rocks of this age present in the Oregon and Washington coast range that that are chemically related to the older Siletzia rocks and younger Yellowstone hotspot products. Siletzia and related rocks of the hotspot were originally welded onto the North American continent in coastal California and Oregon, but since that time tectonic forces have caused northward migration of these rocks by as much as 300 km to their current position in coastal Oregon and Washington.

So what happened? What stopped the eruptions 20 million years ago? The most likely culprit is a slab of previously subducted ocean crust, which was uplifted by the buoyant plume and trapped beneath the North American continent. This barrier effectively blocked the flow material from the Yellowstone hotspot to the surface. Magma was still being generated, but it was backing up behind the barrier. The accumulated magma finally punched through 17 million years ago, breaking the ancient slab and resulting in the Columbia River Basalt eruptions. Then began the progression of volcanic calderas to present-day Yellowstone.

About 20 years ago, this story might have been dismissed as fantasy. Through years of careful accumulation of data and evidence, however, the case has become quite strong — the Yellowstone hotspot is a long-lived feature that dates back to at least 50 million years ago, and perhaps even earlier. This evolution in thought is a good example of how continued data collection and study are critical and can shift our view of geologic history, even changing our understanding of something as important as the Yellowstone magmatic system.

For more on this fascinating story, check out the summary article on the topic written by Vic Camp (San Diego State University) and Ray Wells (USGS) and appearing in the January 2020 edition of “GSA Today”.

Looking southwest from the Steens Mountain summit area into the Alvord desert of eastern Oregon. This fault-block escarpment reveals the oldest lava flows of the Columbia River Flood Basalts, which erupted about 17 million years ago. Three or four vertical dikes that feed these flows are evident in the midground ridge where they stand as rock walls cutting across the horizontal lava flows. The Steens Mountain eruption site is one of many volcanic provinces generated along the Yellowstone hotspot track.