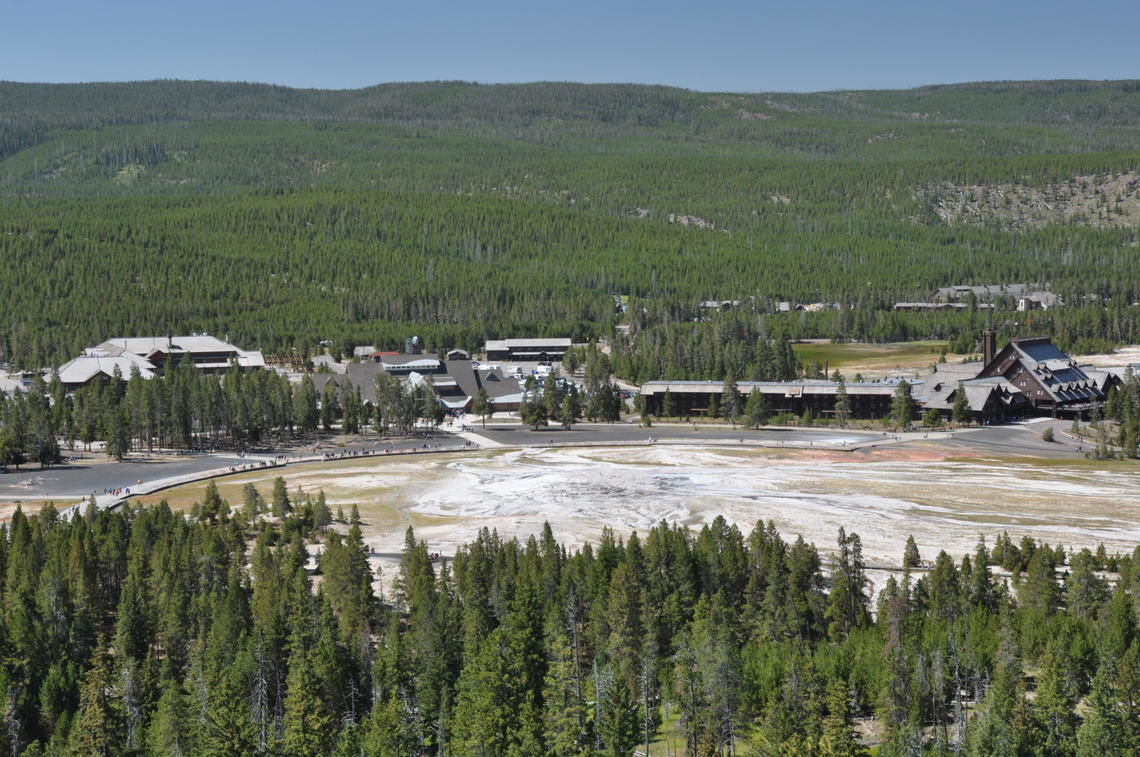 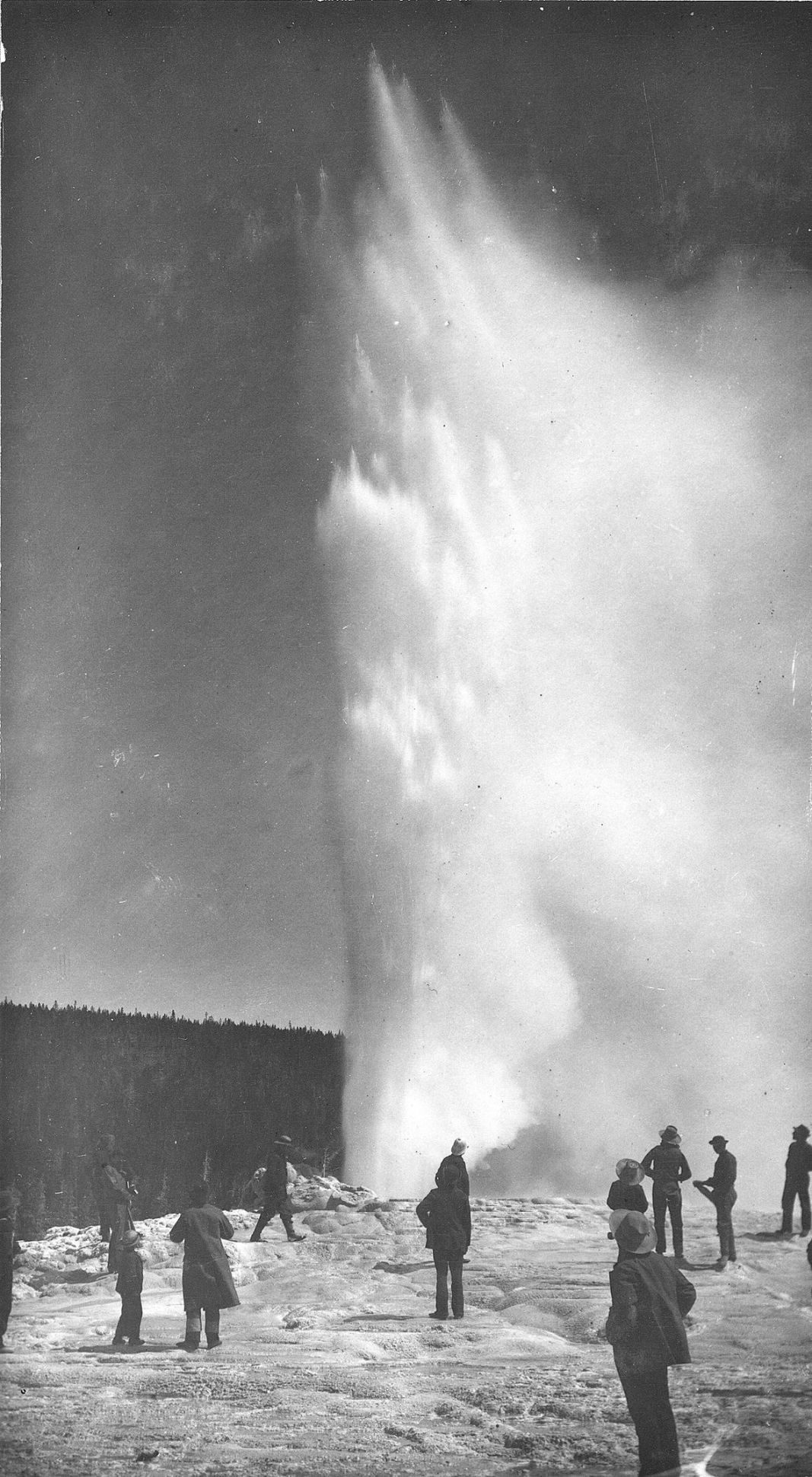 This photo of Old Faithful geyser was taken around 1878 during the Hayden Survey.

Old Faithful’s fame is well deserved. The geyser has been erupting at regular intervals for as long as records exist, and it delights visitors from around the world with its eruptions of boiling water. These eruptions regularly reach more than 130 feet and typically last for several minutes.

Old Faithful is located in the Upper Geyser Basin of Yellowstone National Park, home to the densest concentration of geysers anywhere in the world. In about 1 square mile of area lie approximately 150 geysers.

There are no concrete records of what Native Americans might have thought of Old Faithful. Obsidian flakes found at multiple locations around the Upper Geyser Basin, however, indicate that the area was well-known to native people. The first known Euro-American explorer to the Yellowstone region was John Colter, who explored the area alone in 1807-1808. It is not known if Colter traversed the Upper Geyser Basin or witnessed eruptions of Old Faithful.

In 1864, a gold prospector named George Harvey Bacon reportedly traveled through the area with Native Americans and, according to one of his descendants, “spoke of a geyser which was regular in its eruptions and [which] later was called Old Faithful.” A mountaineer also reportedly first witnessed the geyser in 1864 and reported that, to his knowledge, it had not missed an eruption between that year and the time he was interviewed in 1883.

The first officially documented observations of the geyser came in 1870, with the Washburn-Doane-Langford expedition to the region. The geyser was reportedly named by Nathanial Langford, who noted: “It spouted at regular intervals nine times during our stay, the columns of boiling water being thrown from ninety to one hundred and twenty-five feet at each discharge, which lasted from fifteen to twenty minutes. We gave it the name of “Old Faithful.”

This name was confirmed by Ferdinand V. Hayden, who led the 1871 geological survey that resulted in the establishment of Yellowstone as the world’s first national park in 1872. Of Old Faithful, Hayden wrote: “This geyser was named by Mr. N. P. Langford, and well sustains the reputation given it by the Doane and Washburn expedition of 1870. It has been called the Guardian of the Valley. It is so regular in its operations and they occur so frequently that it has afforded unusual facilities for observation.”

The time between Old Faithful eruptions has not remained constant over the years. In the 1870s, explorers noted that the time between eruptions was 60-70 minutes. This remained the case through the 1950s, but then began to lengthen to the average today, which is 94 +/- 10 minutes between eruptions. About 2% of all eruptions are short, lasting only about 2.5 minutes. Following these short eruptions, the time to the next eruption is likewise shorter, about 65 minutes.

The lengthening of time between eruptions did not happen smoothly, but instead occurred as a result of nearby seismic events, including the 1959 M7.3 Hebgen Lake (Montana) earthquake, the 1975 M6.1 Norris Geyser Basin earthquake and the 1983 M6.9 Borah Peak (Idaho) earthquake. In the months following each of these events, the interval between eruptions at Old Faithful increased and maintained a new, longer time period. For example, prior to the 1983 Borah Peak earthquake, Old Faithful erupted on average every 69–70 minutes, but four months after the earthquake the interval had increased and stabilized at 77–78 minutes.

There is also evidence that rainfall can impact Old Faithful eruption intervals. During wet years, the interval is slightly less than during dry years, perhaps reflecting the greater volume of water that is available to feed eruptions. So even climate has an impact on how Old Faithful works.

Old Faithful has attracted attention since the first explorers visited the area, and no doubt from generations of Native Americans before then. The geyser is indeed a marvel, and like all of Yellowstone’s hydrothermal features, it is dynamic and ever-changing.

With more trips planned for this fall and next summer, there is strong hope that the map will be done before the park's 150th Anniversary in 2022!

Bow hunter killed by elk that charged him

Authorities say a bow hunter was killed when an elk he had wounded charged at him and gored him in the neck with its antlers.

This photo of Old Faithful geyser was taken around 1878 during the Hayden Survey.