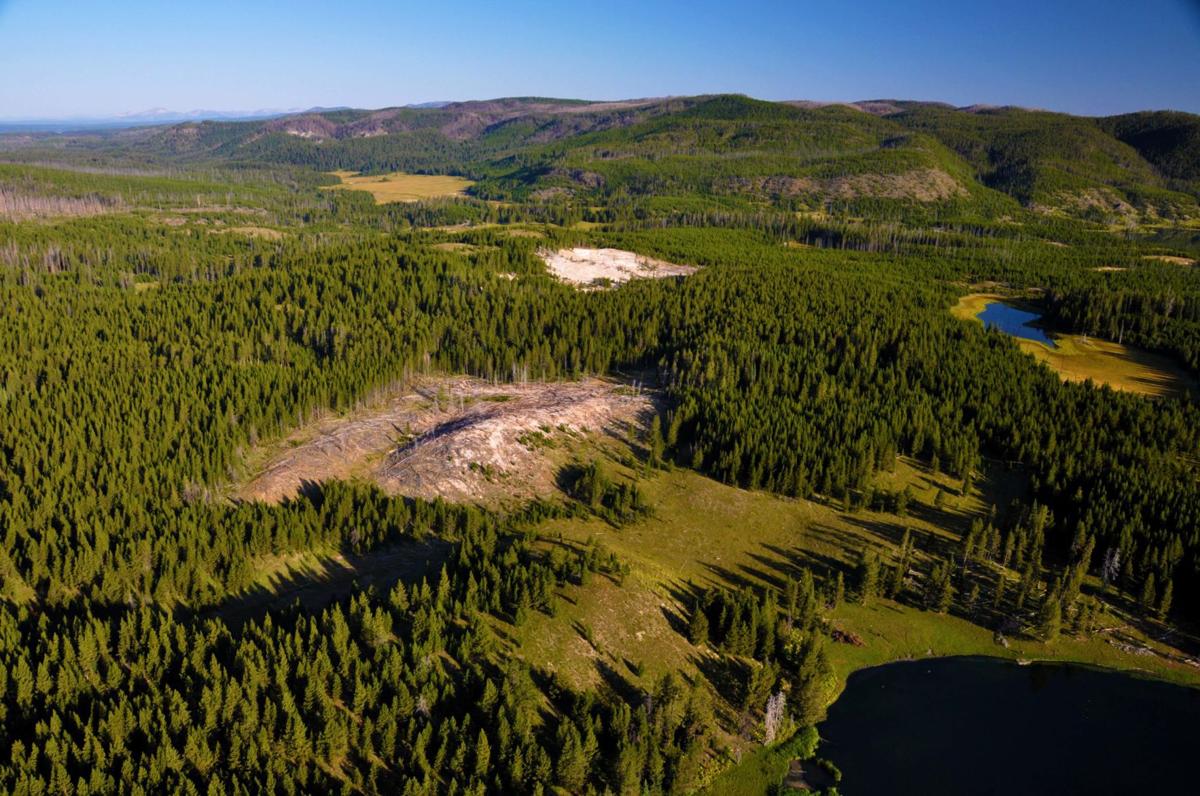 Aerial view of the new thermal area, in the center left. The existing Tern Lake thermal area is the bright white patch of ground in the upper middle part of the image. West Tern Lake is in the lower right. Research was conducted under NPS Geology Programs Milestones Permit 2016-9. 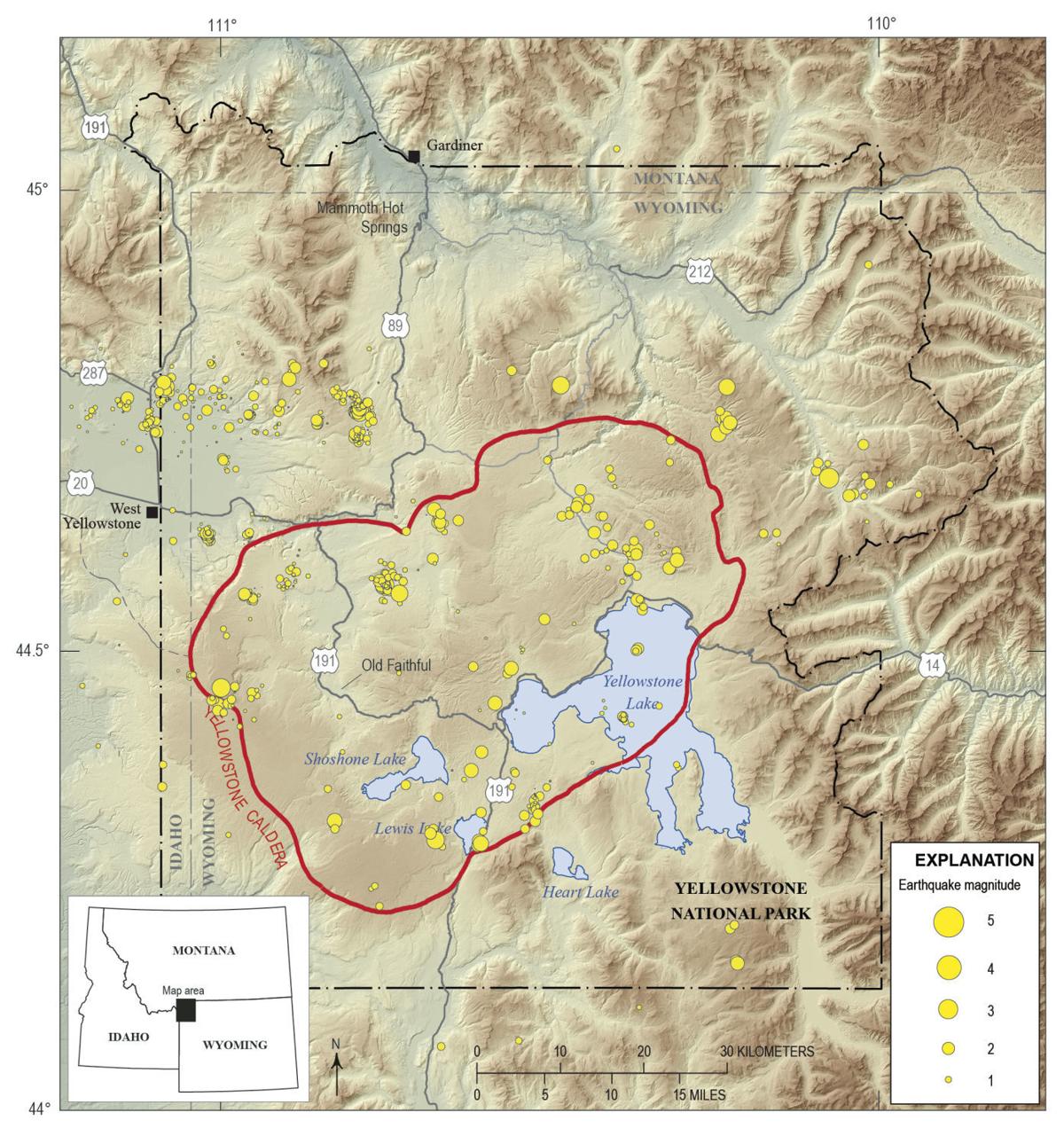 Happy New Year, and welcome to a new decade! We hope that everyone has enjoyed a wonderful start to 2020.

As has become tradition, we would like to take the first Yellowstone Caldera Chronicles article of the year to review what happened in Yellowstone during the previous 12 months. And what a 12 months it was!

Steamboat Geyser turned a lot of heads in 2018 when it set a new record for eruptions in a single year, with 32. In 2019, Steamboat smashed its own record, with 48 eruptions! The longest period between eruptions was a little over 17 days, while the shortest was 3 days and 3 hours — itself a record for the shortest time between major water eruptions of the geyser. The activity was enjoyed by thousands of park visitors and was the subject of quite a bit of scientific research, which we hope will come to fruition in the coming months.

Unlike 2018, however, there was little additional geyser activity of note. Back in 2018, Ear Spring, near Old Faithful, had a rare eruption, and Giant Geyser, also near Old Faithful, experienced a number of water eruptions. But Giant went quiet in early 2019, with no eruptions after March, and Ear Spring and nearby geysers had returned to their usual level of activity by late 2018. Such is the fickle nature of geysers!Earthquake activity for the year was low overall. There were 1,217 located earthquakes during 2019, which is well below the average of 1,500-2,500 earthquakes per year. About half of these earthquakes occurred as part of 11 separate earthquake swarms. This is not unusual, since swarms account for roughly 50 percent of the total seismicity in the Yellowstone region.

Deformation patterns in Yellowstone mostly followed established trends. GPS stations in Yellowstone Caldera showed continued subsidence, with small fluctuations that were probably related to seasonal weather patterns. Since the caldera began subsiding in 2015, both the Sour Creek dome, on the east side of the caldera near Hayden Valley, and the Mallard Lake resurgent dome, on the west side of the caldera near Old Faithful, have subsided by about 4 inches.

In contrast to the caldera, the area around Norris Geyser Basin had been rising since 2015, but this uplift gradually slowed to a stop in late 2018. After no up or down motion at all during the first 9 months of 2019, the Norris area began to subside in September/October, sinking by a little more than an inch by the end of 2019.

2019 also saw the first visit to Yellowstone’s newest thermal area, near Tern Lake on the east side of the caldera. This thermal area was

first seen in satellite imagery as a hot spot that was outside any known thermal region. Inspection of older satellite and airborne images revealed that the area was healthy forest as recently as 2001, but then gradually showed signs of tree die-off and chalky white soil, which is characteristic of Yellowstone thermal areas. A team of geologists visited the site during the summer of 2019, finding that boiling temperatures were present just beneath the surface in a few places, and there were vents releasing hot gas that included some hydrogen sulfide. But there was no water at the surface — no geysers or hot springs.The past year was also a great one for research, particularly into how earthquakes occur in Yellowstone. For example, multiple studies of the 2017 Maple Creek earthquake swarm were published. These studies concluded that the swarm was largely driven by the migration of water beneath the surface and was occurring in a region that was prone to seismicity due to the stresses caused by the 1959 M7.3 Hebgen Lake earthquake.

2020 promises to be another interesting year for Yellowstone geology. Stay tuned to future editions of Yellowstone Caldera Chronicles for all the latest about current activity and research results.

We hope that you all had a relaxing and pleasant holiday season. From all the

Man kills grizzly in self-defense, keeps claws as a memento

“I was so (expletive) mad at it because he was going to eat me, I know he was,” the man told investigators, according to the records. “So I basically said, ‘Hey, (expletive) you,’ and I cut his claws off."

In the lawsuit, Bonnie Lynn is seeking $500,000 in compensation for loss of revenue to her cabin rental business.

For almost a week the buzz around Jackson has been about a mountain lion drawn down to the base of the butte towering above town and staying put to dine on a mule deer carcass.

The manager said "the number of skiers and snowboarders we currently attract does not make winter operations financially feasible as we run a deficit of over $200,000 per year.”

“This is very likely the first pack to call our state home since the 1930s," Gov. Jared Polis said. "I am honored to welcome our canine friends back to Colorado after their long absence.”

Emergency management coordinators see it each year – someone drives past a winter road closure and gets stuck on an icy road; someone else lea…

Aerial view of the new thermal area, in the center left. The existing Tern Lake thermal area is the bright white patch of ground in the upper middle part of the image. West Tern Lake is in the lower right. Research was conducted under NPS Geology Programs Milestones Permit 2016-9.