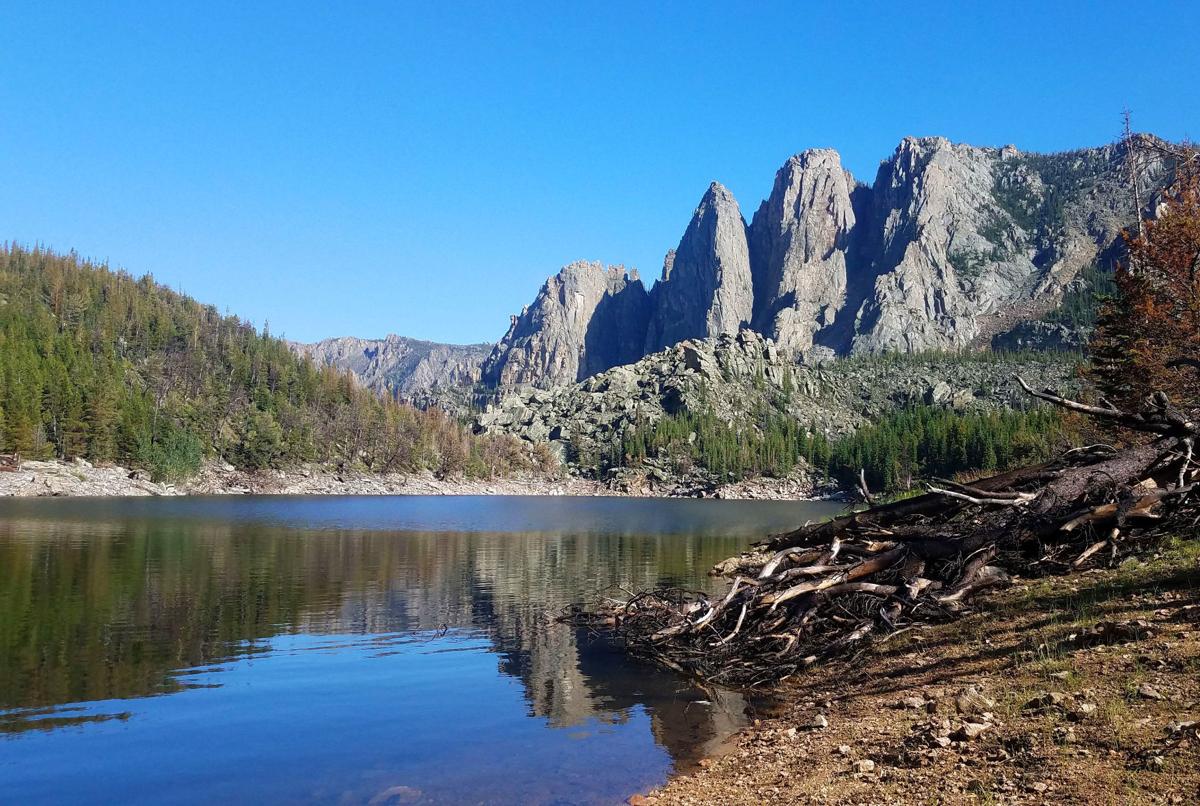 Looking back toward the rock slide from Deep Lake, high cliffs rise above the lake and the Littlerock Creek drainage below. 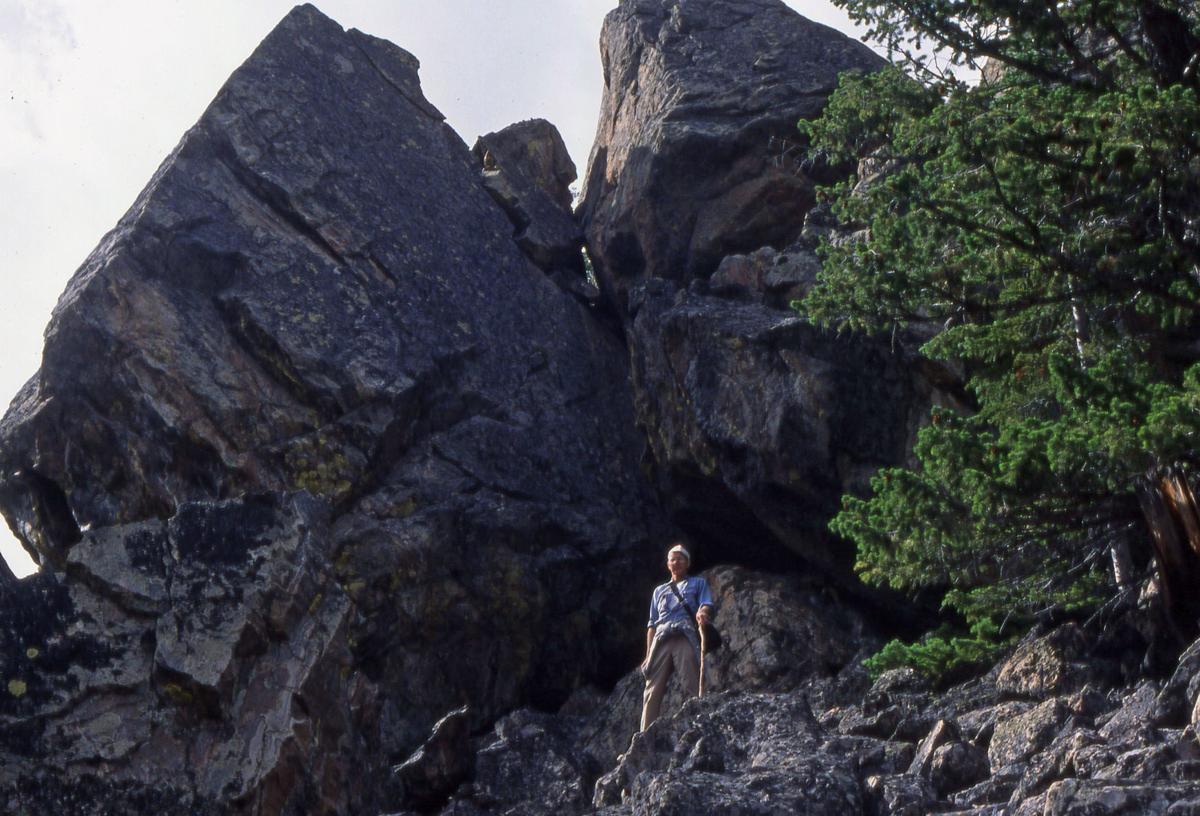 Auzie Blevins stands by house-sized blocks of rocks that are part of the Deep Lake rockslide in 1992. Experts say such big boulders float to the surface during slides.

With a persistence bordering on obsession, Auzie Blevins has spent the past 20 years trying to get recognition for a colossal jumble of rocks in the Beartooth Mountains.

“He doesn’t give up,” said John Boehmke, who introduced Blevins to the site.

“This seems to be his passion.”

Blevins’ attention is focused on a huge rock slide that dammed Littlerock Creek and created Deep Lake in the Shoshone National Forest. Blevins has speculated that it may be the largest rock slide in North America.

“It is pretty spectacular,” said Ken Pierce, a retired geologist for the U.S. Geological Survey in Bozeman. “It’s a huge mound that dams the lake.”

The rock slide is one of many along the Beartooth Front, according to Dan Seifert, Beartooth Ranger District geologist, and probably the largest, although no one has ever measured them. The slide has been a known entity since at least the 1950s when it was added to geology maps of the area.

Boehmke stumbled onto the area in 1992 after studying maps for a new place to explore. The Littlerock Creek canyon appeared to be an easy route to Deep Lake, just west of Clark, Wyoming. Maps can be deceiving.

“I’ve been up there a dozen times, but I’ve never made it to the lake,” Boehmke said. “The farthest we ever got up was near the bottom of the slide.”

After Boehmke introduced Blevins to the area, he said, “He’s been championing this thing ever since.”

Blevins believes there is no slide in North America bigger than the 4-mile long, 1,000-foot deep accumulation of boulders, some of them 90 feet in diameter.

An 83-year-old retired environmental specialist for the Bureau of Reclamation, Blevins has doggedly pursued Forest Service recognition of the slide’s distinctiveness. As a former bureaucrat, though, he’s becoming pessimistic that he will ever see anything done.

Right now, a rough dirt road leads to the mouth of the canyon. From there a narrow trail wanders up the creek toward Deep Lake. The steep walls of the canyon eventually force hikers to negotiate the jumble of the rock slide.

Ideally, Blevins would like to see the Forest Service build a bridge and serviceable trail up to the slide, or hire volunteers to do the work. Once built, geologists would have easier access to the area to make detailed measurements of the massive pile of stones, as well as determine when the rock slide occurred.

Blevins has speculated that the slide slipped after glaciers retreated following the end of the last ice age about 11,000 years ago. Deep ice would have helped support the steep canyon walls until it melted.

Aging the slide could be done by taking sediment samples from Deep Lake, Pierce said, which would show when it was formed. The other alternative would be to date a rock sample.

“We don’t have any of those specialists on the forest,” said Kristie Salzmann, the Shoshone National Forest’s public information officer.

The rock slide must have created massive thunder, shook the earth for miles around and belched a cloud of dirt high into the sky when it occurred. The rocks tumbled down the north side of the canyon, which climbs to an elevation of more than 9,600 feet. Deep Creek borders the slide area on the west, and Littlerock Creek on the east. Waters that feed the creeks come from snowmelt atop the Beartooth Plateau, which rises to more than 10,800 feet.

Boehmke estimated the amount of rock that slipped off the cliffs at just under 500 million cubic yards. That is several times the volume of the Madison River Slide, which was caused by a 1959 earthquake that dammed the Madison River and created Quake Lake.

“It looks like it came off of one side, but it could have been more than one event,” Boehmke said.

Blevins has measured the crest of the slide at three-quarters of a mile across, and more than 1,000 feet high at the crest. The top of the slide rises about 200 feet or more above Deep Lake, which drains through the boulders into Littlerock Creek.

For comparison, the Madison River slide in 1959 that created Quake Lake was 200 to 400 feet high and about three-quarters of a mile wide.

During the Shoshone National Forest’s recent forest plan update, Blevins and Boehmke formally requested that the slide and its environs be designated an Area of Special Interest. Blevins even talked the forest planner into visiting the slide.

“I thought that was all we had to do,” he said. “When the forest plan came out, nothing happened.”

For whatever reason — Blevins was never told why — his proposal was ignored or disregarded.

This summer, however, she and some friends hiked down to Deep Lake from the top of the Beartooth Plateau.

“The trail was great,” she said. “It was a beautiful hike.”

After crossing the grassy, open area of the plateau — navigating via piles of rocks called cairns — they reached the ridge overlooking the drop-off into the canyon and Deep Lake. The trail down the mountain was well marked, albeit steep, Salzmann said. Prior to the hike, while researching the area, she was surprised at how little information she could find about the destination.

Red Lodge photographer Merv Coleman hiked down to Deep Lake once and came out via the Littlerock Creek drainage. He wouldn’t do it again.

“That was a struggle,” he said, until the backpackers reached the trail below the slide. But even that was littered with downfall. “That was soul-searching time.”

The drainage burned in a wildland fire in 2003. Since then undergrowth has thrived, including berry-producing shrubs that attract black bears and grizzlies. Coleman also saw rattlesnakes along the trail.

Blevins admitted to having mixed emotions about focusing more attention on the Deep Lake area, which would likely draw more people to the region. But it is such a unique place — possibly of “national significance” and therefore deserving of rigorous scientific research, he said.

“The point I’ve tried to make to (the Forest Service), probably ad nauseam, is that this is a special place,” he said.

“Here’s a resource that needs some publicity.”

Doug Smith arrived in Yellowstone National Park in 1994 with orders to reintroduce wolves. The same year, a cow elk numbered 1125, was born.

Fish numbers and pounds per mile are down significantly since 2012 in the North Platte, but biologists, anglers, say the fishing is still strong

A series of strange years with low water levels during spawning and a rush of run off after spawning has led to poor survival rates.

Three men were snowmobiling in the mountains of central Colorado when they were caught in the slide.

Game wardens on Thursday found three cow elk that had been shot from a road south of Livingston and their meat left to waste.

Three men were snowmobiling in the mountains of central Colorado when they were caught in the slide.

Looking back toward the rock slide from Deep Lake, high cliffs rise above the lake and the Littlerock Creek drainage below.

Auzie Blevins stands by house-sized blocks of rocks that are part of the Deep Lake rockslide in 1992. Experts say such big boulders float to the surface during slides.