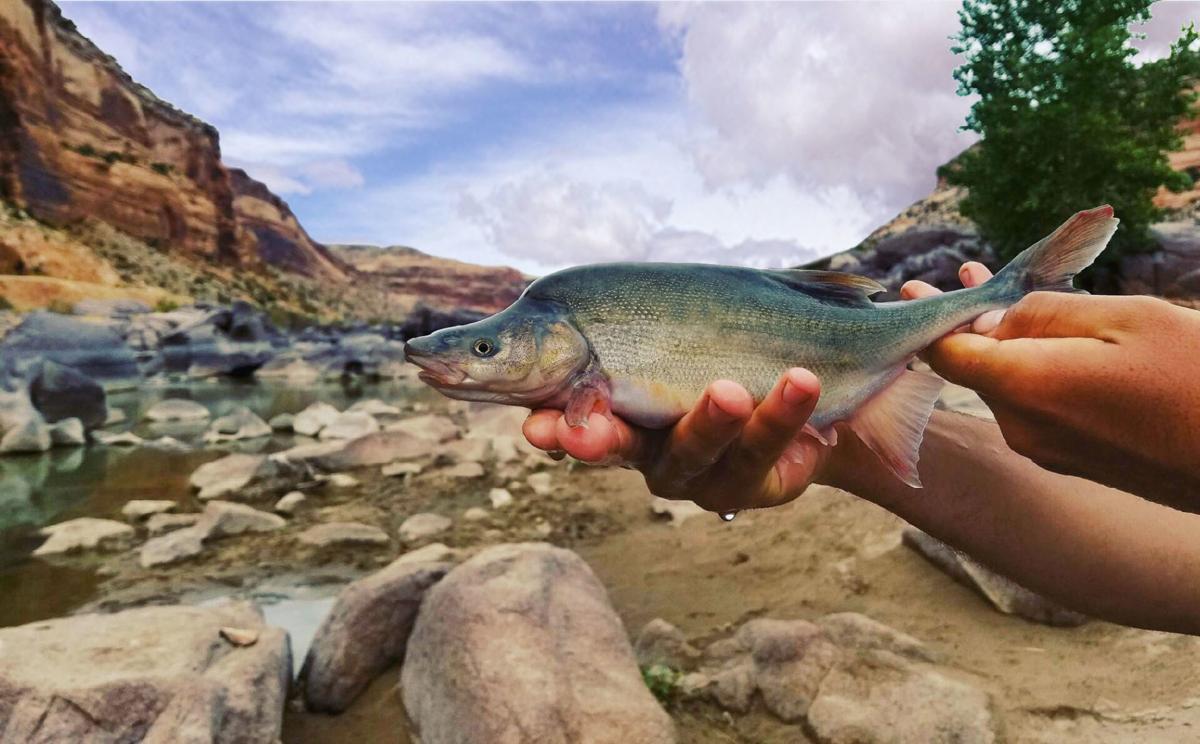 The humpback chub is one of four endangered native species in the Colorado River system. The U.S. Fish and Wildlife Service proposed reclassifying the fish from endangered to threatened. 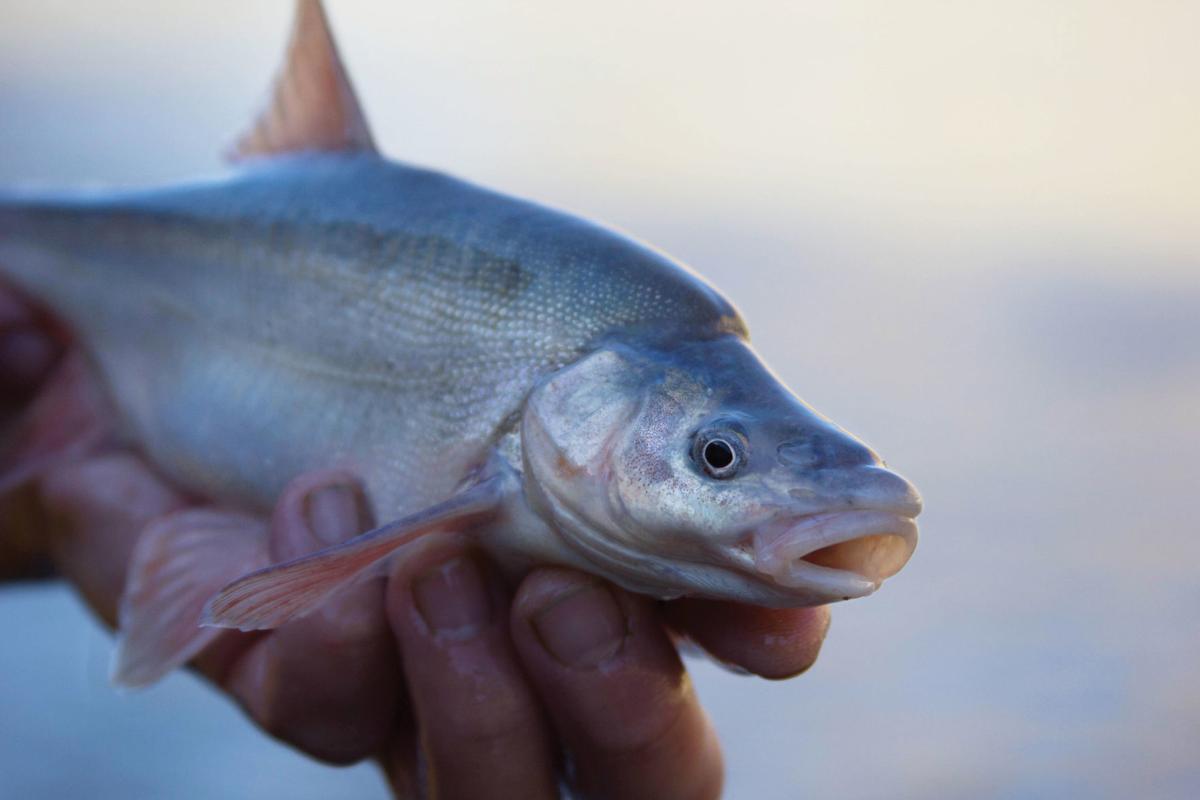 Humpback chub have virtually no scales and are immediately identified by the ubiquitous hump on their backs.

As far as fish in the West go, the silver-sided humpback chub is one of the strangest-looking, and arguably one of the least known. Most are no longer than an average forearm, and they’re immediately distinguished by the ubiquitous hump on their backs. They have virtually no scales, live to be upwards of 40 years old and have long snouts that overhang their jaws. And they nearly went extinct.

The lowly chub is one of four endangered native species in the Colorado River system. It once ranged from southwestern Wyoming to the Gulf of California and now lives in just five isolated pockets from the Grand Canyon up to central Utah. Officials believe those stable populations are enough to stave off extinction, for now. As a result, the U.S. Fish and Wildlife Service proposed on Wednesday reclassifying the fish from endangered to threatened.

“An endangered species is one that is at risk of extinction now, and a threatened one is at risk at some point,” said Thomas Chart, director of the Upper Colorado River Endangered Fish Recovery Program. “Our long-term assessment is they demonstrate stability and are not at threat now.”

Some environmental groups disagree, saying the mounting threats against the species including climate change, new dam proposals and invasive species are too great to risk a downgrade in protection.

Whether or not they deserve the highest form of federal protection, Chart said the fact that stable populations remain is owed in no small part to Wyoming’s water.

The humpback chub evolved in the Colorado River, likely reaching its current form between three million and five million years ago. It’s one of the largest minnow species, known for living in deep, whitewater stretches of big rivers. The farthest north it likely ranged was roughly where Flaming Gorge Dam now sits, Chart said.

But despite millions of years of survival, the minnow did not weather development of the West. It became so plagued by dams, which changed the flow of rivers, and nonnative species like smallmouth bass, walleye and northern pike, which ate the smaller minnows and competed with larger ones for food, that it was placed on the inaugural endangered species list in 1967.

Three other native fish in the Colorado Basin share the list with the humpback chub including the Colorado pikeminnow, razorback sucker and boneytail. And there they sat for decades.

One of the biggest problems came from reservoirs, Chart said. The humpback chub evolved to spawn during high water in the spring when flows rushed fast and cold, then slowly dwindled into the summer and fall to be slower and warmer.

But when dams began regulating flows, holding back much of the spring runoff and slowly releasing it throughout the year, baby humpback chub struggled to survive.

“They spawn every year, but how well those young survive is a function of the water year they’re in and subsequent water years,” Chart explained. “Surviving your first couple years whether because of predation or being a small creature in a river system is a big hurdle.”

The natural forces working against the young surviving is likely part of the reason the fish evolved to be so long-lived. But it has also hindered its ability to survive in the rapidly changing landscape.

When the Fish and Wildlife Service first started monitoring the fish, it took years to even find where the fish lived and how far they ranged. They recorded isolated populations, then numbers dropped in the late ‘90s and early 2000s, and one small, remnant population in Dinosaur National Monument blinked out in 2005.

In the late ‘80s, Wyoming, Colorado and Utah joined together with government agencies, water user associations and nonprofits to create the Upper Colorado River Endangered Fish Recovery Program, beginning Wyoming’s intimate involvement with a fish that no longer lived within its borders.

The fish recovery program calls for states and agencies working together to save the fish but also to meet human water needs. It meant that the Bureau of Reclamation began regulating flows out of Flaming Gorge Reservoir to better mimic those early-season peaks the chub requires for survival. For Wyoming, it detailed a slew of small requirements such as monitoring the amount of water used from the Little Snake River, said Steve Wolff, administrator for the interstate streams division for the Wyoming State Engineer’s Office and chairman of the program’s management committee.

In return, no state needed permission from the federal government before individual water projects. Without the pact, Wolff said the state could have faced a future where every irrigation project in the area or oil and gas proposal went through a formal Endangered Species Act analysis.

And for the most part, the change in flows worked.

The largest of the five remaining populations is stable at about 12,000 fish in the Grand Canyon. The three others are much smaller. The closest to Wyoming is now about 4,000 fish living in a 45-mile stretch of the Green River. Some populations may even be increasing slightly, Chart said.

“People don’t like the Endangered Species Act, but the program works,” Wolff said. “There’s never been any litigation related to endangered species in the basin and water development has occurred unhindered because of it. It’s been a success story.”

States and the feds have also worked on aggressive plans to manage the nonnative species preying on humpback chubs, Chart said.

Because of those efforts, and the relatively stable populations, the Fish and Wildlife Service announced their proposed reclassification. For most of the life of the Endangered Species Act, a change from endangered to threatened meant little for protection of the species. All regulations applied regardless of its status. But recent, and controversial, changes to the act now mean a significant drop in federal protections.

That’s why environmental groups like the Center for Biological Diversity are opposing the reclassification and calling the fish still “very much endangered,” especially since the species still hasn’t met its recovery goals.

“This is a disturbing attack on an endangered species by the Trump administration, which has been systematically removing protections from our waters and wildlife,” said Taylor McKinnon, senior public lands campaigner for the group.

Chart understands their concerns, but said the proposed reclassification includes what is called a “4d rule” that reinstates many prior protections. The move from endangered to threatened allows states flexibility including killing some fish if it is a byproduct of projects to improve their numbers like removing nonnative fish or repopulating using hatcheries. Part of the proposal also includes revising the recovery goals based on years of additional information about the fish.

The proposal has 60 days for public comment before the Fish and Wildlife Service will make their final determination.

Challenges to the fish remain, including dams, nonnative species and climate change.

“We still recognize the risk of extinction in the foreseeable future,” Chart said. Just not right now.

The humpback chub is one of four endangered native species in the Colorado River system. The U.S. Fish and Wildlife Service proposed reclassifying the fish from endangered to threatened.

Humpback chub have virtually no scales and are immediately identified by the ubiquitous hump on their backs.