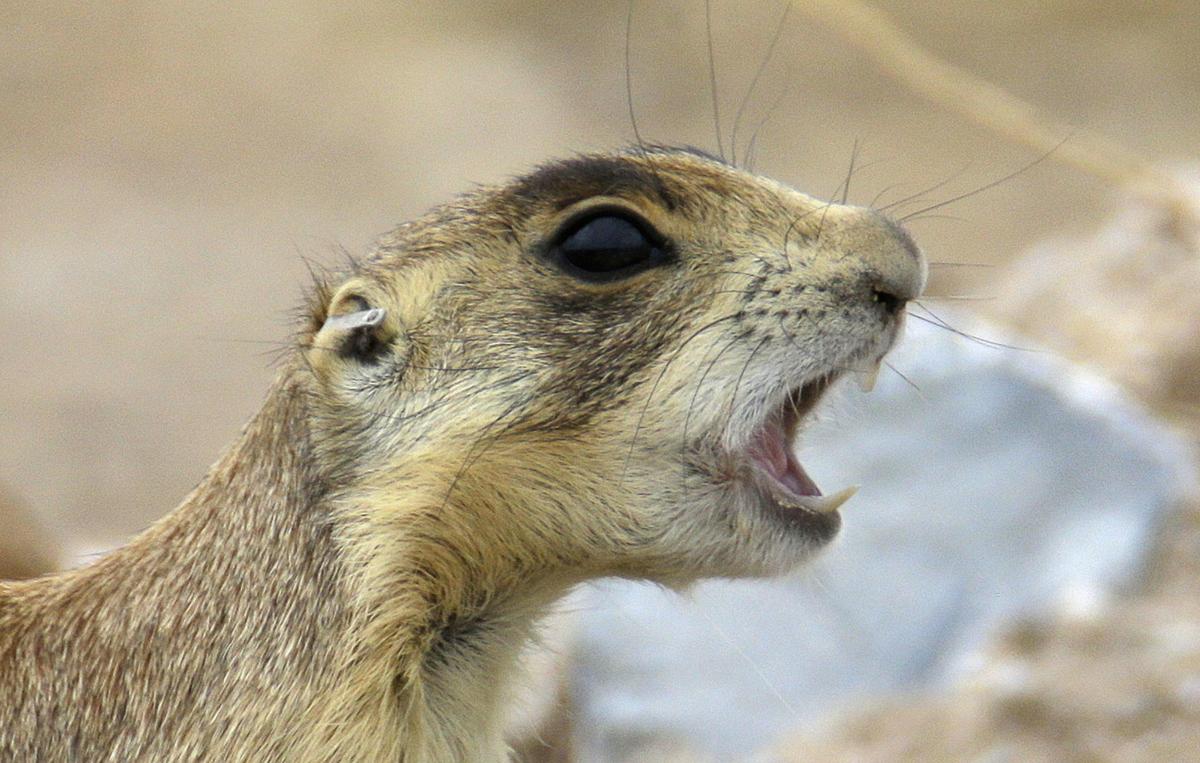 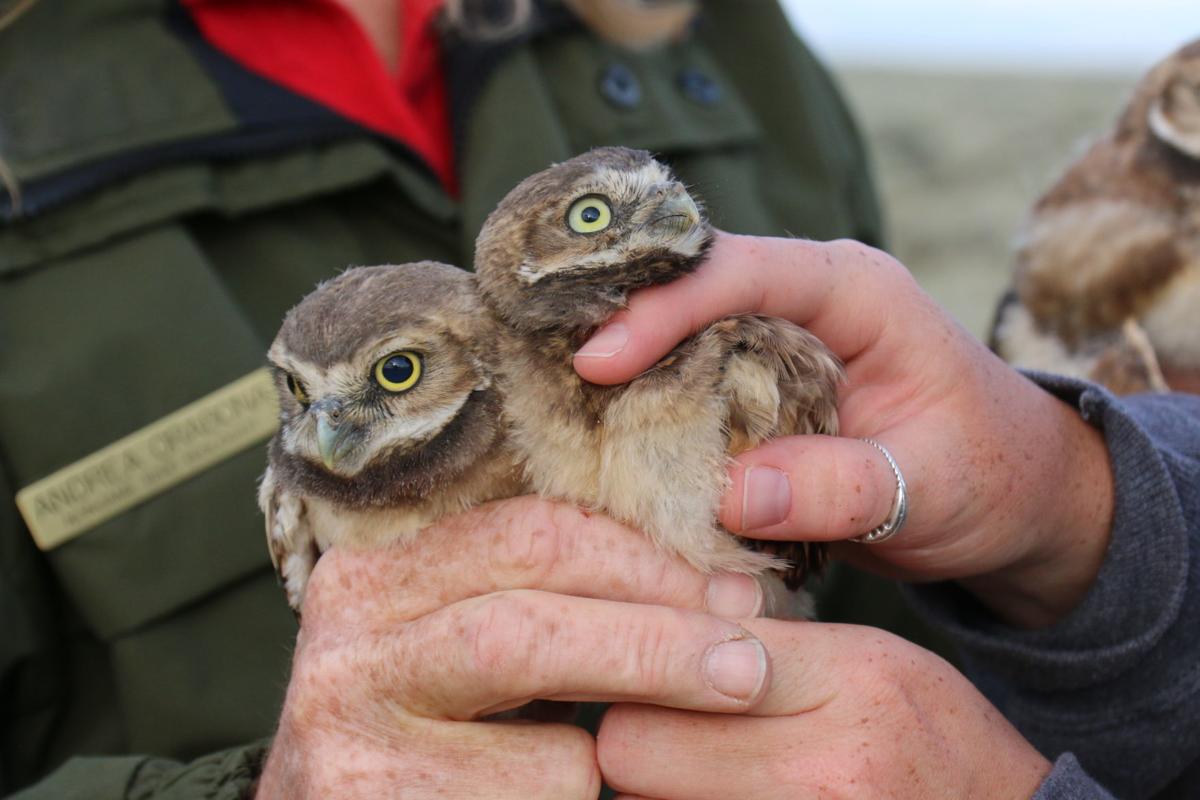 Researchers hold two burrowing owls during a July study on the Pinedale Mesa. 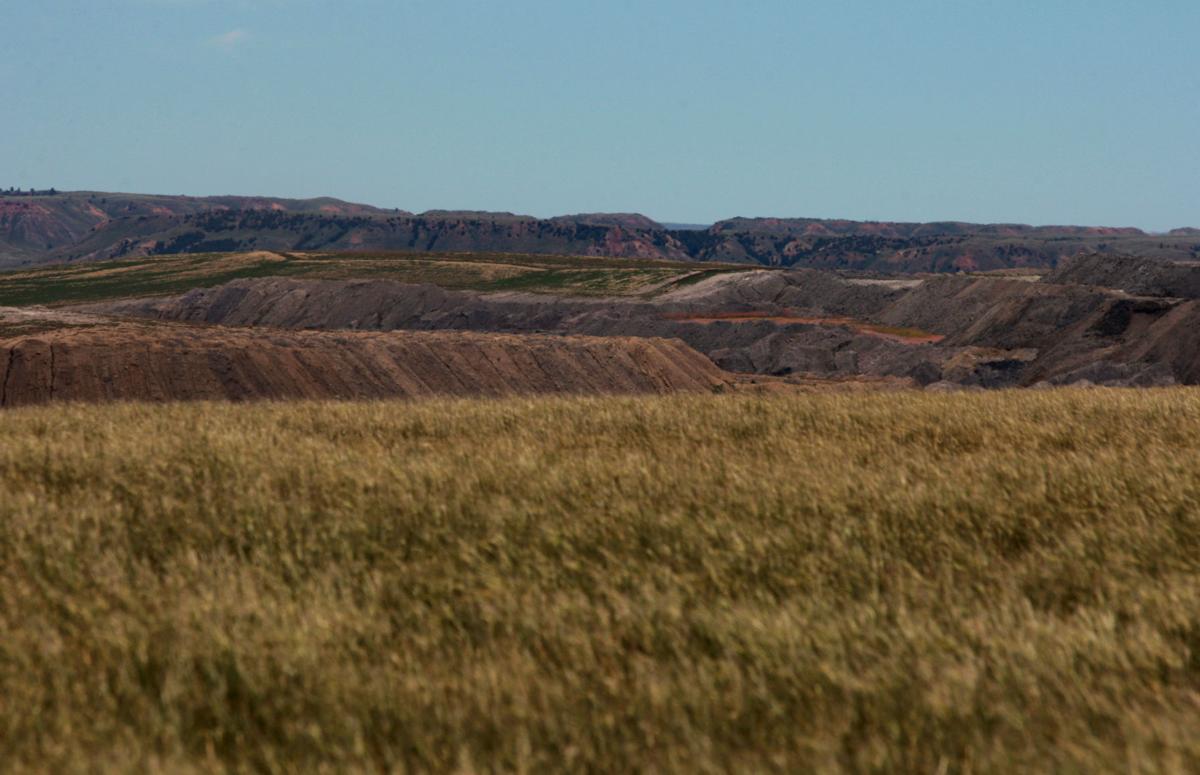 A portion of the Thunder Basin National Grassland, pictured in June 2014 south of Wright.

The black-tailed prairie dog, an adored, hated, feared and beloved staple of the landscape of the American West, may soon see its range cut just a little bit smaller.

Prairie dogs were once ubiquitous in grasslands across most of Wyoming and other Great Plains states, moving in waves across the prairie. And upon their colonies depended a host of other species from black-footed ferrets, which need them for food and shelter, to burrowing owls, which use their abandoned burrows for houses.

But they also eat grass that ranchers need for grazing. And now they carry the plague.

Black-tailed prairie dogs occupy less than 5 percent of their historic range, with a portion of that contained within the Thunder Basin National Grassland in northeast Wyoming. A proposed revision to a plan by the National Forest Service may shrink that range even further, allowing for possible poisoning and shooting across the entirety of the national grassland.

The Forest Service and proponents of the plan say it is a compromise, and a way to address more quickly and effectively fluctuating prairie dog populations. Critics of the proposal say it is unbalanced and threatens the future of prairie dogs and the many species that depend on them.

Meetings begin May 6 to solicit feedback from the public.

Changes to how the Forest Service manages prairie dogs across a patchwork of grasslands were a long time coming, said Russell Bacon, supervisor of the Medicine Bow-Routt National Forest and Thunder Basin National Grassland.

The current plan was created in the early 2000s, and prioritized the expansion of prairie dogs across the landscape. It set aside 18,000 acres where people could not shoot or poison prairie dogs, and provided some guidance on management across the rest of the grasslands.

No one thought black-tailed prairie dogs would extend much further than 18,000 or 20,000 acres, said Dave Pellatz, executive director of the Thunder Basin Grasslands and Prairie Ecosystem Association, a local nonprofit of landowners, ranchers and other area interests.

By the time forest managers knew how big the problem had become and began discussing solutions, plague – a deadly, nonnative pathogen carried by fleas that primarily impacts prairie dogs – began to tear through the area, Pellatz said. In response, the Forest Service removed the shooting ban and allowed people to kill prairie dogs even in the original 18,000 acres.

“Hundreds of thousands of prairie dogs were dead, and you would walk through the colonies and it would stink. To some of us here who lived through things in the past, this isn’t good management and isn’t good for anyone let alone the prairie dogs,” he said. “We need to do something that allows us to keep those catastrophic highs and lows from happening.”

Today prairie dogs cover only about 1,000 acres of that original 18,000 acres, prompting concerns from wildlife and conservation groups.

The management plan in place didn’t give the Forest Service the ability to quickly deal with an expanding prairie dog population, Bacon said. The new proposal would.

Under the new plan, which Bacon said came from years of discussions between ranchers, landowners, energy groups and conservationists, no area will be off-limits to prairie dog shooting and poisoning if populations expand. The plan also shrinks the original 18,000 acres set aside for prairie dog-dependent species to a scattered 10,000 acres to be managed as a shortgrass ecosystem.

“We believe the target objective acres will provide for the long-term viability of those species like mountain plover and burrowing owl and swift fox,” Bacon said.

The battle for and against white-tailed and black-tailed prairie dogs has been a long one in Wyoming and the West.

Ranchers point to a landscape covered in prairie dog burrows and see breeding grounds for plague and a loss of grass for their livestock.

Wildlife advocates see prairie dog colonies as an integral part of the ecosystem, a necessary component no different than the grass itself. Dozens of species including the mountain plover, endangered black-footed ferret, burrowing owl, ferruginous hawk and swift fox depend at least in part on the existence of the colonies.

The new plan states part of its purpose is to “place greater emphasis on control and active management of prairie dog colonies to address significant concerns related to health, safety, and economic impacts on neighboring landowners.”

Johnathan Proctor, Rockies & Plains program director for Defenders of Wildlife, said the purpose is to gut the minimal protections that now occur.

For Pellatz, whose family has ranched in the Thunder Basin area for more than a century, the solution is somewhere in between.

“In most of life you have people saying it’s going to be terrible and on the opposite side you have folks who say, ‘the only good prairie dog is a dead prairie dog, and we don’t want any of them,’” he said. “We walk somewhere in the middle. I can see both perspectives. I think that the opportunities do exist for trying to maintain a little more balance and perhaps a little more wholistic approach.”

Unfortunately, said Proctor, in this proposed plan prairie dogs – and other species – lose.

“Prairie dogs are an ecosystem. They are a key part of the Great Plains of North America and 95 percent of that is gone,” Proctor said. “These are multiple use lands that wildlife is a part of it, and they’re writing them off the land.”

The black-footed ferret – which was once considered extinct and now has been reintroduced into eight states – likely depends on the Thunder Basin Grassland for its future delisting, he said. If prairie dog colonies are reduced too much, ferrets will never return.

Black-footed ferrets haven’t been reintroduced into the area yet, Pellatz said, and likely won’t in the near future not because of prairie dog numbers but because of social pressures. The Wyoming Game and Fish Department will not release the endangered predator onto any lands where they will face opposition from adjacent private land owners.

Game and Fish officials declined to comment on the plan and its possible impact on other nongame species until they’ve had a chance to fully review it.

Bacon stressed the revised proposal is not final. The public comment period is open until May 20, and a final decision may come within 18 months.

They lay their eggs up to 10 feet underground, deep in abandoned prairie dog tunnels.

As of 2015, Shirley Basin was home to Wyoming's only population of black-footed ferrets. The experimental population, in existence since 1991,…

To many people, spring in Wyoming means mud, rain and the not-so-infrequent snowstorm. To birders, it means opportunity.

Researchers hold two burrowing owls during a July study on the Pinedale Mesa.

A portion of the Thunder Basin National Grassland, pictured in June 2014 south of Wright.