“They’re still a really healthy population,” said Alexandra DeCandia, who looked into wolf genetics for research she recently published. “It’s not anything we’re worried about.”

Little is known about what causes the variation in how animals are affected by mange, but a team of researchers, including then-Princeton graduate student DeCandia, sought to shed light on this mystery. Their study, published in “Evolutionary Applications,” brings together schools of thought from molecular biology, disease ecology and conservation biology.

“This was a really neat paper,” said Dan Stahler, Yellowstone National Park wildlife biologist who collaborated on the research. “It’s one of the more elegant studies we’ve done.”

Using 25 years of wolf pedigrees that the park’s researchers have gathered, the research explored the link between genetic information and disease dynamics, Stahler said. Mange was an easier disease for the study to target because the outbreaks are readily apparent through observation — wolves lose hair from scratching when infected — unlike other diseases, he added.

Mange isn’t specific to wolves. It’s also found in more than 100 other mammals. In humans the infections are referred to as scabies. Animals infected by mange vary in the severity of their reactions, which can range from itchy skin lesions to hair loss, weight loss, secondary infections and even death.

These varied reactions, DeCandia and her fellow researchers found, can depend on an animal’s genetic diversity. More genetic variety gives an animal better tools to fight the infection.

“We noticed some very different responses,” DeCandia said. “Some wolves clear the infection in a short amount of time. Others develop really severe symptoms, like over 50 percent hair loss or secondary infections. It’s really a stark contrast between the two responses. So we wanted to know if there was a genetic component.”

The scientists compared the situation to one in agriculture known as the “monoculture effect.” Plants with a similar genetic composition, like a field of corn, will be less likely to fight off a disease, allowing it to spread throughout the entire population.

“Genetics are this really powerful tool for helping us learn about wildlife populations, whether in Yellowstone or captivity,” DeCandia said. “It tells us so much about their health and allows us to look into their past.”

As the wolves most severely infected die or don’t mate, they are taken out of the gene pool. That can leave behind animals better genetically equipped to fight off mange infections.

The recently published study examining the chromosomal makeup of the park’s wolves identified 410 genetic variants known to “play roles in inflammation, immunity and skin barrier integrity, and could potentially be molecular targets for mange or scabies treatment,” according to a Princeton press release.

Wolves were reintroduced to Yellowstone beginning in 1995. After being captured in Canada and before being released in the park, the animals were screened for health problems, vaccinated against canine diseases and treated with chemicals to kill mites that can carry mange.

The wolves were chosen from different areas of Canada to ensure they weren’t related, and therefore more genetically diverse. Yet as Yellowstone’s wolves interbreed, with little outside influx of wolves with other genes, they are slowly becoming more genetically similar.

“In the early years it was described as a wolf fortress,” Stahler said.

Wolves are very good at avoiding interbreeding, Stahler noted. Yet Yellowstone has such a healthy wolf population that there’s very little in-migration of wolves from outside the park.

When a mange outbreak occurred in 2007, the disease killed or removed from the breeding population those wolves most likely to suffer the worst.

“Such changes in diversity are not unexpected,” said Bridgett vonHoldt, an associate professor in ecology and evolutionary biology at Princeton University and the senior author of the study. “We have found that genetic diversity has been preserved well through mechanisms that shape pack and breeding pair formations. This recent opportunity to incorporate immunity and mange prevalence has really given us insights into the genetic dynamics shaped additionally by disease in a social carnivore.”

To perform their study, the scientists used blood and tissue samples gathered by Yellowstone researchers from more than 400 wolves. That was combined with 25 years of observational data. Plus, because the animals were reintroduced, the pedigree of the population is well known.

“Yellowstone really excels at that,” DeCandia said. “The research that comes out of Yellowstone is incredible. There’s so much collaboration and data that’s being used and shared.”

DeCandia and her colleagues’ work builds on earlier studies of mange in Yellowstone. Research in 2016 published by wildlife biologist Paul Cross, of the U.S. Geological Survey, showed the severity of mange infection in Yellowstone wolves can affect when they hunt, how far they travel and the amount of calories they need to consume.

Cross used thermal imaging cameras to document winter heat loss by wolves who suffered hair loss due to mange. The more hair a wolf lost, the more it needed to eat to remain warm, Cross found. This research also showed that wolves in larger packs tended to survive mange outbreaks in better condition, possibly because the big packs can provide more food.

In 2015, Emily Almberg worked with Cross on the study looking at pack size. Now a wildlife research specialist for Montana Fish, Wildlife & Parks, Almberg said DeCandia’s study helped explain why she and her fellow scientists “observed a huge amount of variation in mange severity over the years — including variation within the same pack, where you would expect exposure to be ubiquitous,” she wrote in an email. “In my earlier work, I wasn’t able to find strong individual traits that explained that variation in severity. I suspected that there was underlying genetic variation at play, so it was really neat to see that described in this study.”

Almberg said the new study may also help explain why the initial epidemic of mange subsided to lower rates of infection due to genetic selection for resistance or less severe expressions of the disease.

Such work “emphasizes why science is best when it’s collaborative in nature,” DeCandia said. “It strengthens your inference.”

Mange was introduced into the Northern Rockies in the early 1900s by the Montana state wildlife veterinarian in an attempt to eradicate wolves and coyotes.

The disease is believed to have led to a drop in Yellowstone’s wolf population following outbreaks in 2007 and 2008 — the same time wolf populations peaked and coinciding with an eruption of canine distemper virus. That epidemic is believed to have aided in the downfall of the park’s one-time pre-eminent pack in the Northern Range — the Druid pack — which disintegrated in 2010.

Since then, wolf populations have stabilized at between 80 to 108 wolves. As of this winter’s count, however, the wolf population jumped to 123 animals in nine packs, according to Stahler. That’s due to good pup survival. The Junction Butte pack, which denned near Slough Creek, was especially prolific. The pack had three litters totaling 18 pups, all of which survived. With that, the pack has grown to one of the largest ever recorded in the park, totaling more than 30 animals.

For more information on genetics and its use in wildlife science, check out Alexandra DeCandia’s blog posts at https://www.alexandradecandia.com/blog.

The animal, named Elizabeth Ann, is the first clone of a U.S. endangered species. 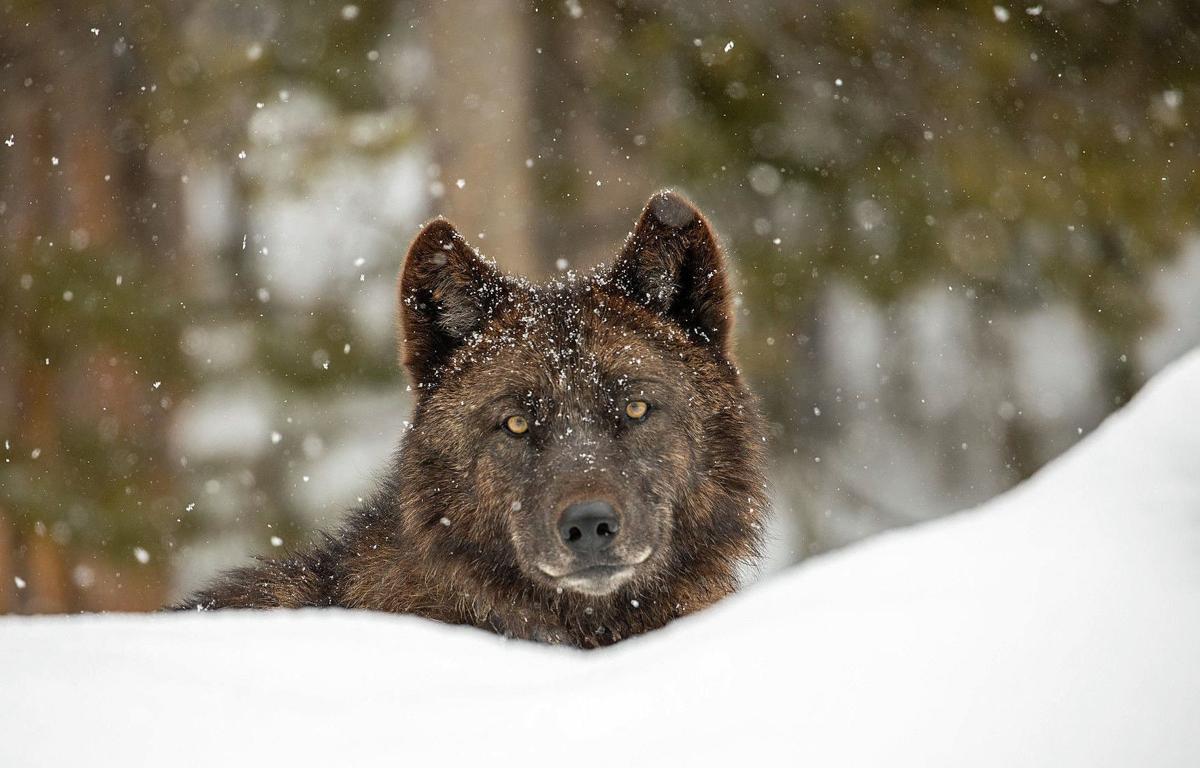 Yellowstone National Park's wolf population has grown this year thanks to the survival of a large crop of pups. By analyzing 25 years of wolf observations and genetic samples from 408 Yellowstone wolves, a Princeton-led research team found that genetics play a role in the severity of the mite-borne disease. 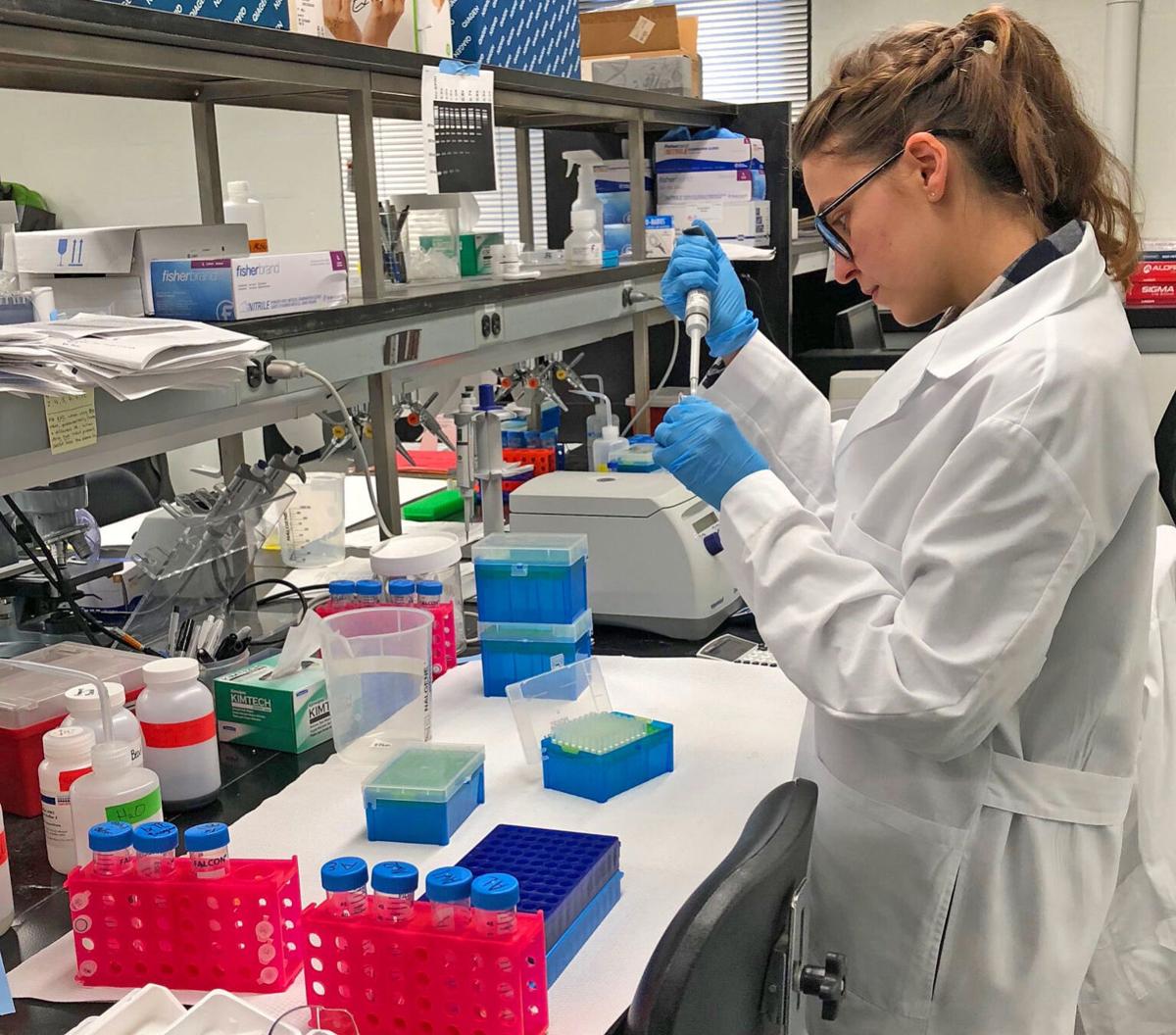 Alexandra DeCandia spent years working on her doctoral thesis on wolf genetics in Yellowstone and its effects on how wolves experience mange. With her colleagues, DeCandia found support for the “monoculture theory”: wolves with severe mange tend to have less genetic variation than wolves with mild symptoms. 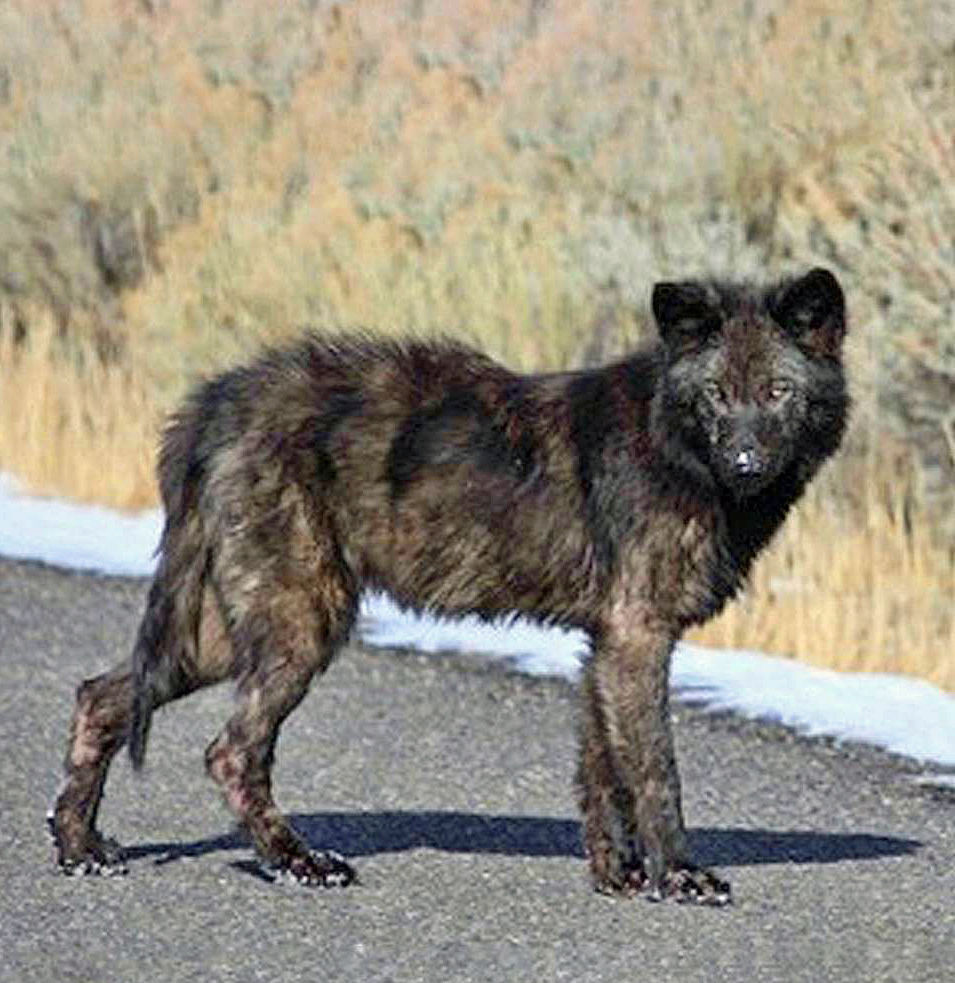 A Yellowstone wolf displays the hair loss and skin lesions associated with a milder case of mange. 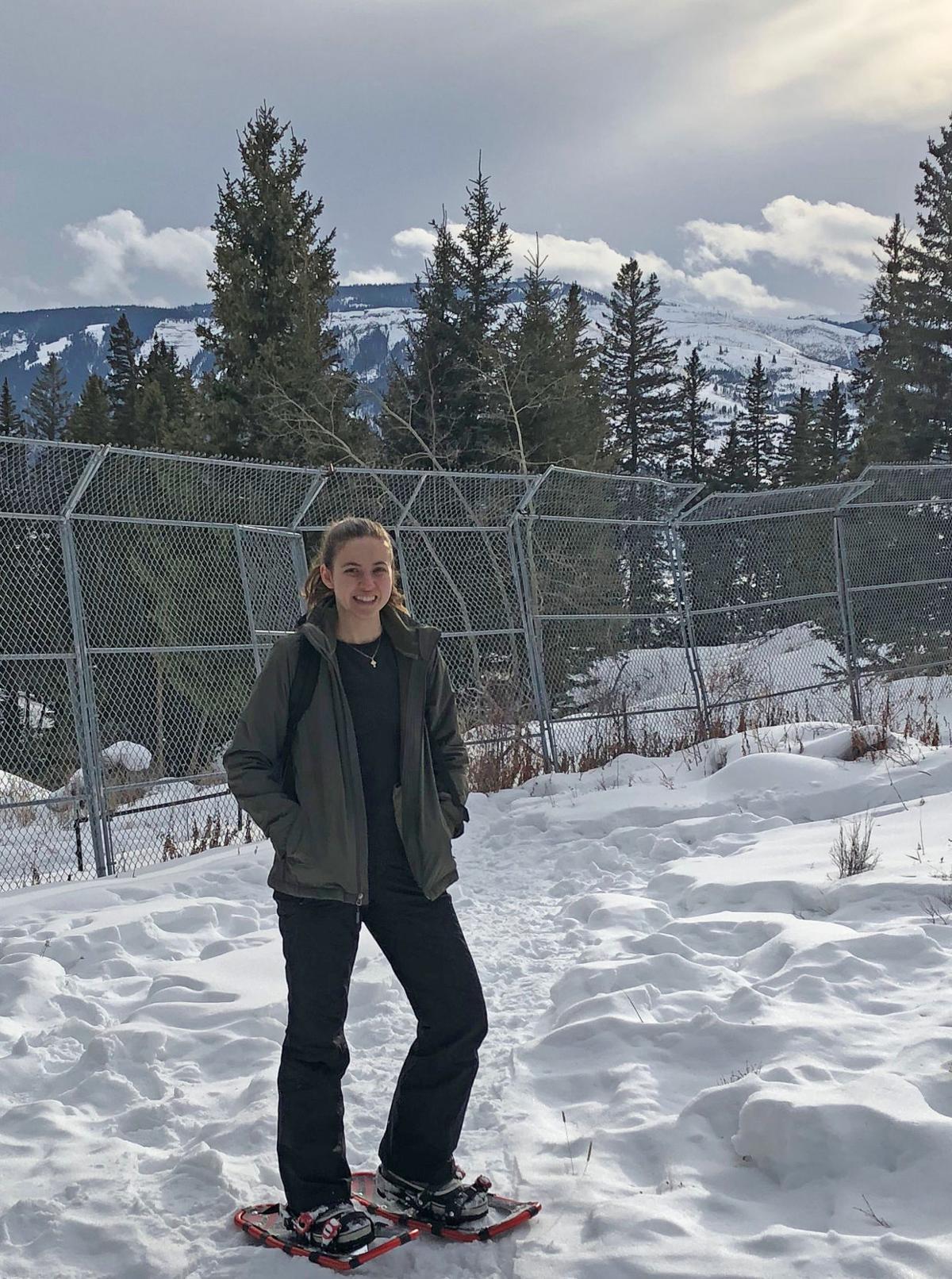 Former Princeton University graduate student Alexandra DeCandia got to visit Yellowstone National Park during her research, including a trip to the pen where wolves were first kept before being released after being captured for reintroduction. 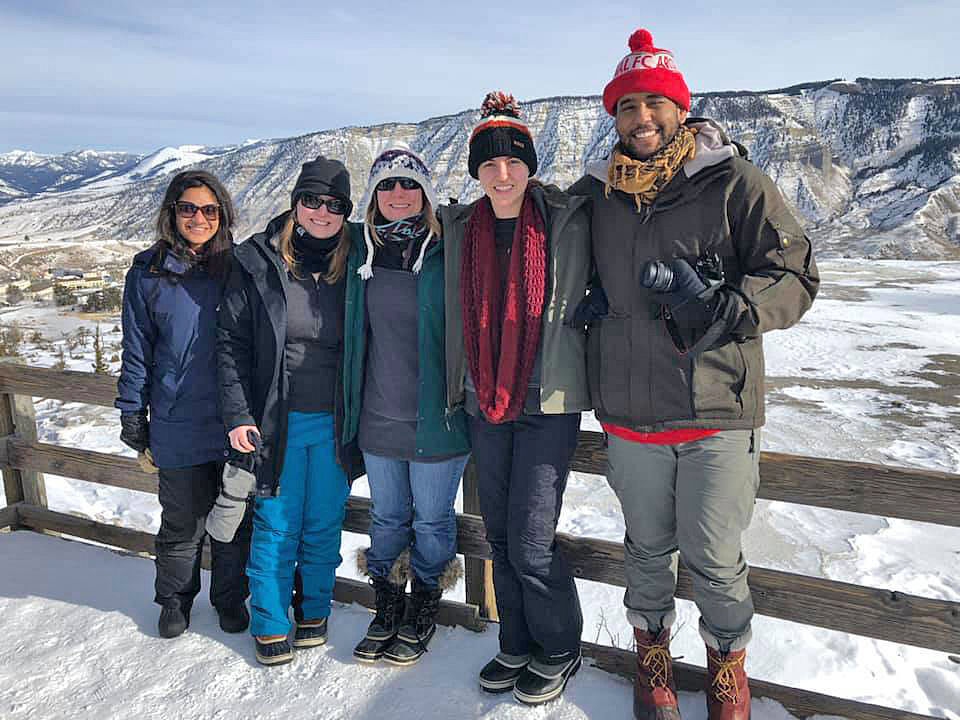 Professor Bridgett vonHoldt (center) is flanked by her graduate students in Yellowstone National Park in this photo from January 2019. From left: Dhriti Tandon, Elizabeth Heppenheimer, Alexandra DeCandia and Christopher Lawrence. 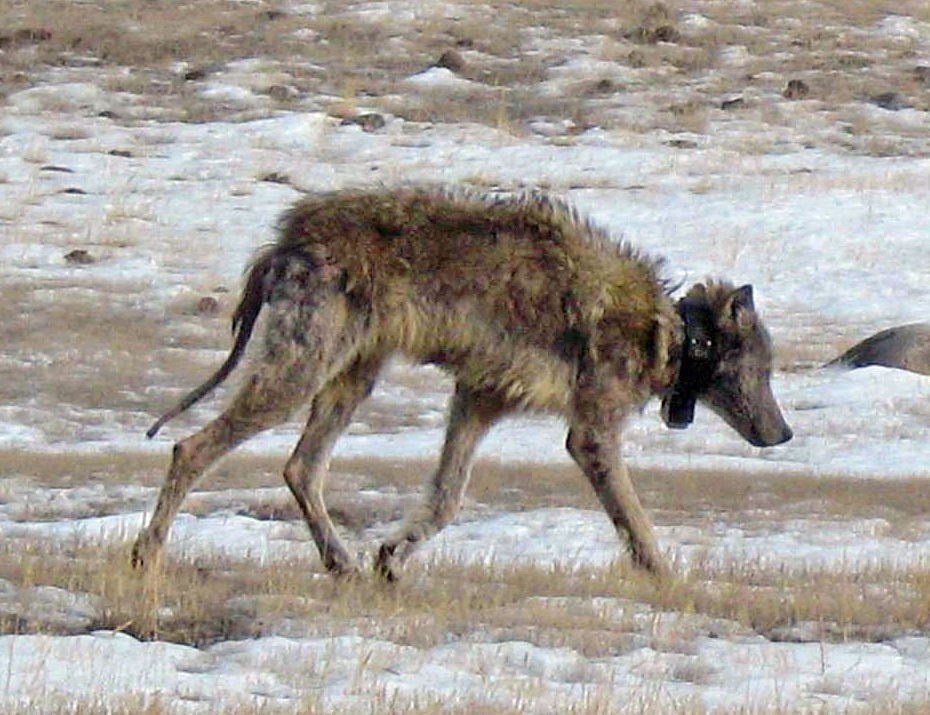