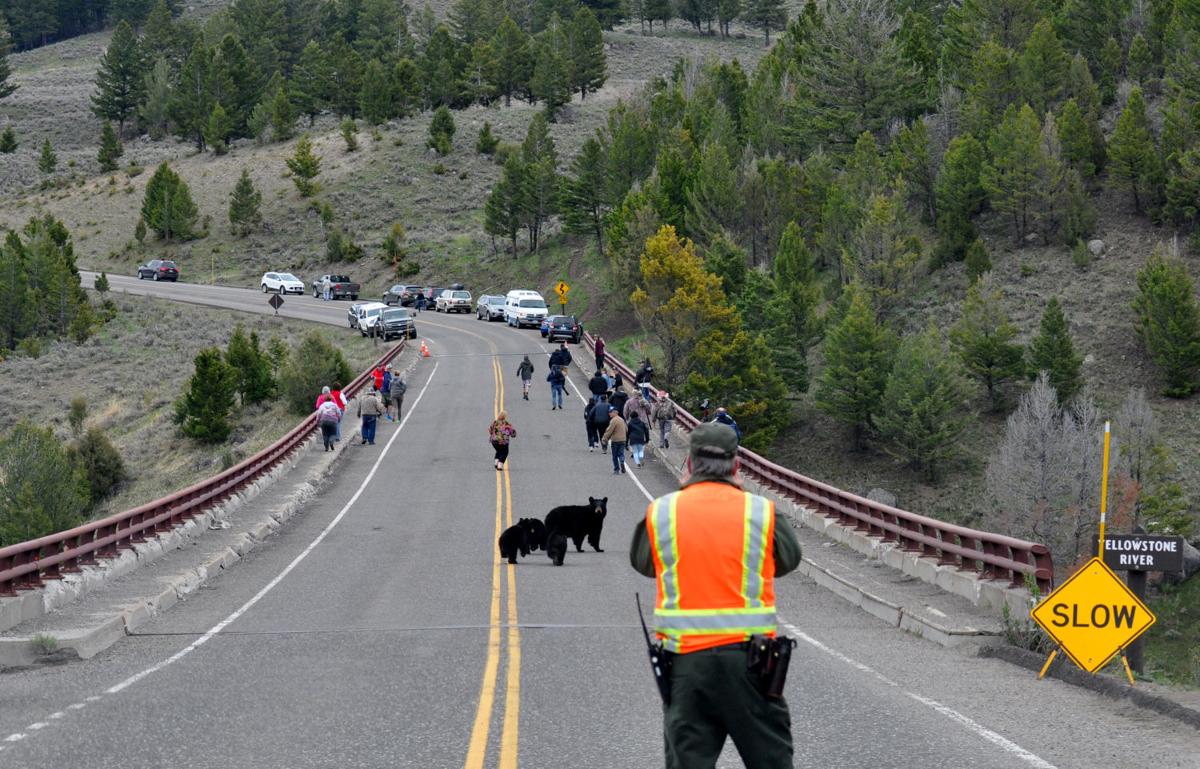 A mother black bear and her three cubs run toward a group of camera-clicking tourists as the animals cross a bridge on May 6 in Yellowstone National Park. 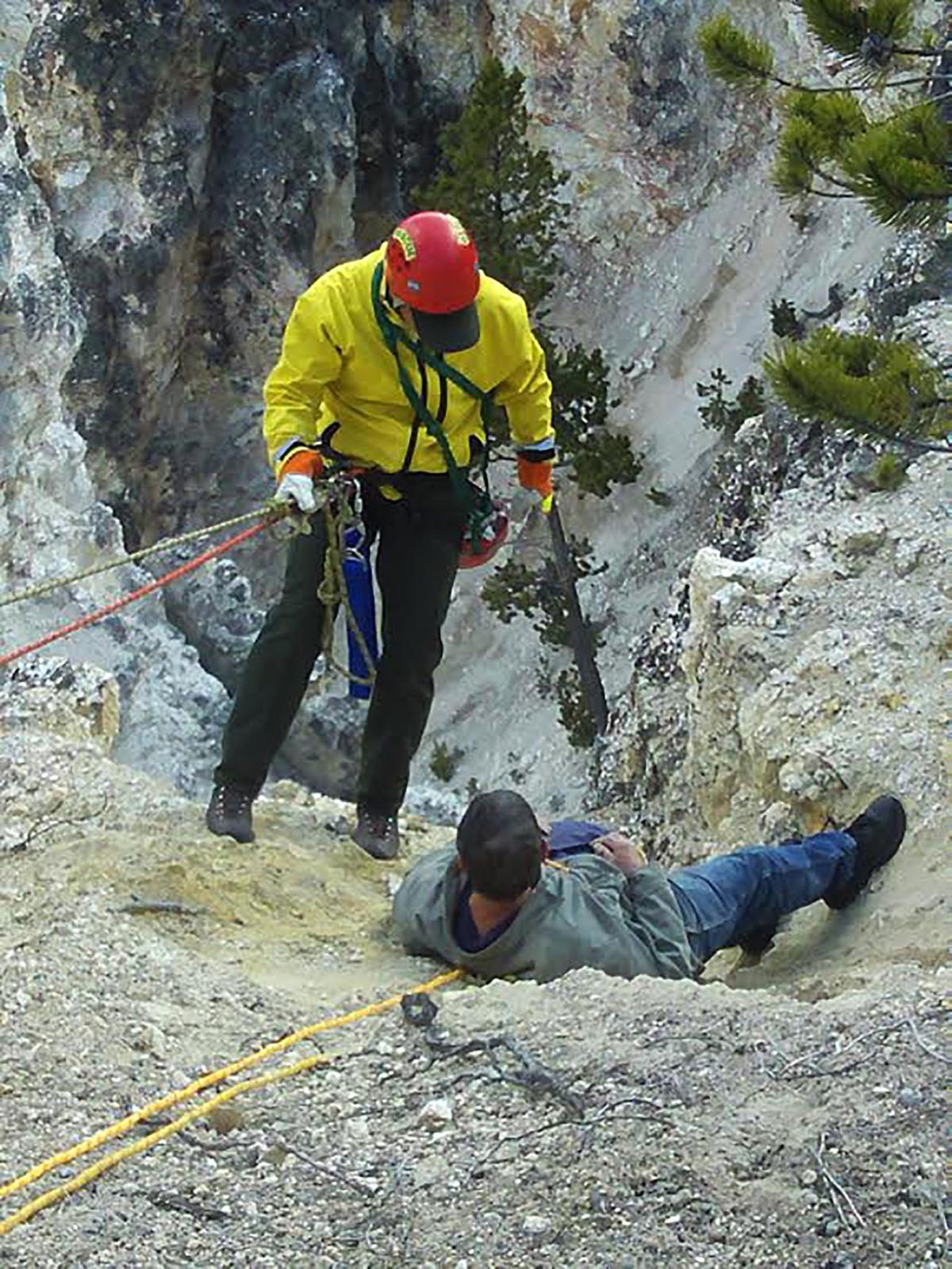 A Yellowstone National Park ranger works to rescue a 71-year-old New York man who fell into the Grand Canyon of the Yellowstone on May 10.

When you think of people getting hurt at Yellowstone, you might picture bears attacking back country hikers or visitors scalded by hot pots.

But it’s much more likely that visitors to Yellowstone National Park will be injured in mundane ways.

“The most common injuries in the park are typically from trips, slips and falls,” said Traci Weaver, public affairs officer for Yellowstone.

Two people were injured this month in the park, one a girl gored by a bison while taking a picture and the other a man who fell in Yellowstone's Grand Canyon. Both were expected to recover from their injuries.

Weaver said a few car crashes take place in the park each year, usually resulting in minor injuries. She said most people drive slowly through the park because they want to take in the scenic views and try to catch glimpses of wildlife.

“We do have distracted drivers, who are looking around at things, and they can cause accidents,” Weaver said.

Drivers sometimes collide with wildlife, but those crashes do not typically result in injuries, she said.

While infrequent, Weaver said people have fallen into the Grand Canyon of Yellowstone. In August, an 8-year-old girl died after falling 550 feet while hiking in the canyon. According to the park service, the girl apparently stepped off the trail and lost her footing.

Earlier this month, a 71-year-old man fell into Grand Canyon while trying to take a picture of a sign at Grand View Point. He fell about 25 feet before he was able to stop himself at the top of a precipice and brace his feet on opposite sides of a crevice. Park rangers rescued him from there.

Even more infrequent are injuries or deaths caused by geothermal features in the park.

In June 2006, a 6-year-old Utah boy suffered serious burns after he slipped on a wet boardwalk in Old Faithful area, according to Yellowstone.com. In the park’s history, only 20 visitors have died after being boiled by one of Yellowstone’s geysers or geothermal features.

Weaver said as long as people are obeying the park safety guidelines and staying on the board walks, they should be safe.

In an unforeseen incident last June, a Taiwanese man visiting Yellowstone died after being struck by a falling tree when he walked off a trail. The tree had burned during the park’s 1988 fires, the park said.

Bear attacks are very rare in Yellowstone, but the park has launched multiple campaigns to prevent the gruesome assaults.

In 2009, the Yellowstone Park Foundation launched the ‘Sponsor a Bear Box’ project to help the park purchase bear-proof storage boxes for campgrounds.

From 1980-2011, 43 people were injured by bears in the park, according to the National Park Service. The probability of being injured by a bear at Yellowstone is 1 in 2.1 million.

Statistics on bison gorings at Yellowstone were not available, but Weaver one or two visitors are gored a year.

Last week, a 16-year-old girl from Taiwan was gored by a bison while posing for a picture in front of the animal.

“The temptation is definitely there when there’s bison or elk right there near the trail to try to get close and get pictures,” Weaver said.

Visitors are required to stay at least 100 yards away from bears and wolves and at least 25 yards away from all other large animals, including bison, elk, bighorn sheep, deer, moose and coyotes.

“We just hope people come here and safely enjoy the park,” Weaver said. “It’s always unfortunate when somebody gets injured while they’re out on vacation. We have our safety rules in place for a reason, and we just hope people adhere to them.”

A 62-year-old Australian man received serious injuries Tuesday when he was charged by a bison in Yellowstone National Park.

Woman injured in Yellowstone while attempting selfie with bison

A man fell into Grand Canyon of the Yellowstone and a girl was gored by a bison at the national park recently, according to press releases.

Yellowstone visitor dies after being struck by tree

A Taiwanese man visiting Yellowstone National Park died Monday after being struck by a falling tree when he walked off a trail, the park repor…

YELLOWSTONE NATIONAL PARK — A young girl has died after falling about 550 feet while hiking in Yellowstone National Park.

A mother black bear and her three cubs run toward a group of camera-clicking tourists as the animals cross a bridge on May 6 in Yellowstone National Park.

A Yellowstone National Park ranger works to rescue a 71-year-old New York man who fell into the Grand Canyon of the Yellowstone on May 10.