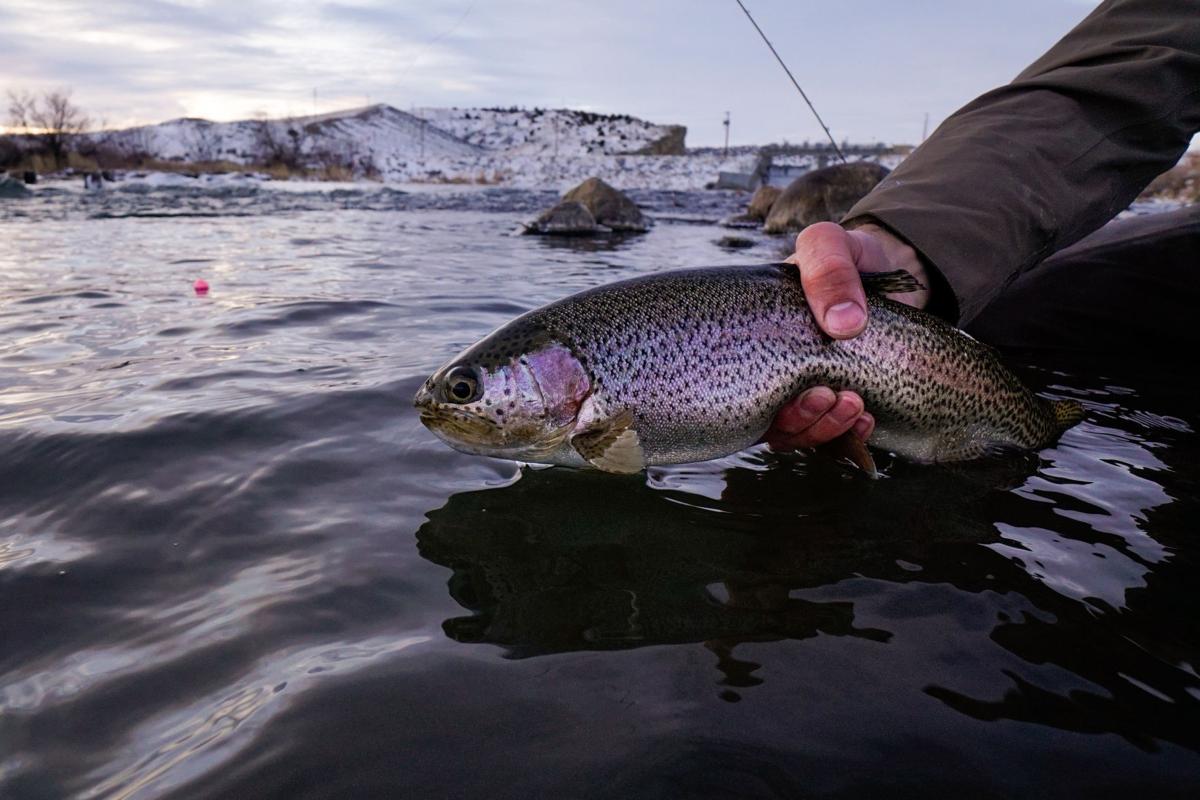 An angler holds a rainbow trout in the Gray Reef section of the North Platte River. In 2020, Gray Reef held 3,000 pounds of fish per mile. 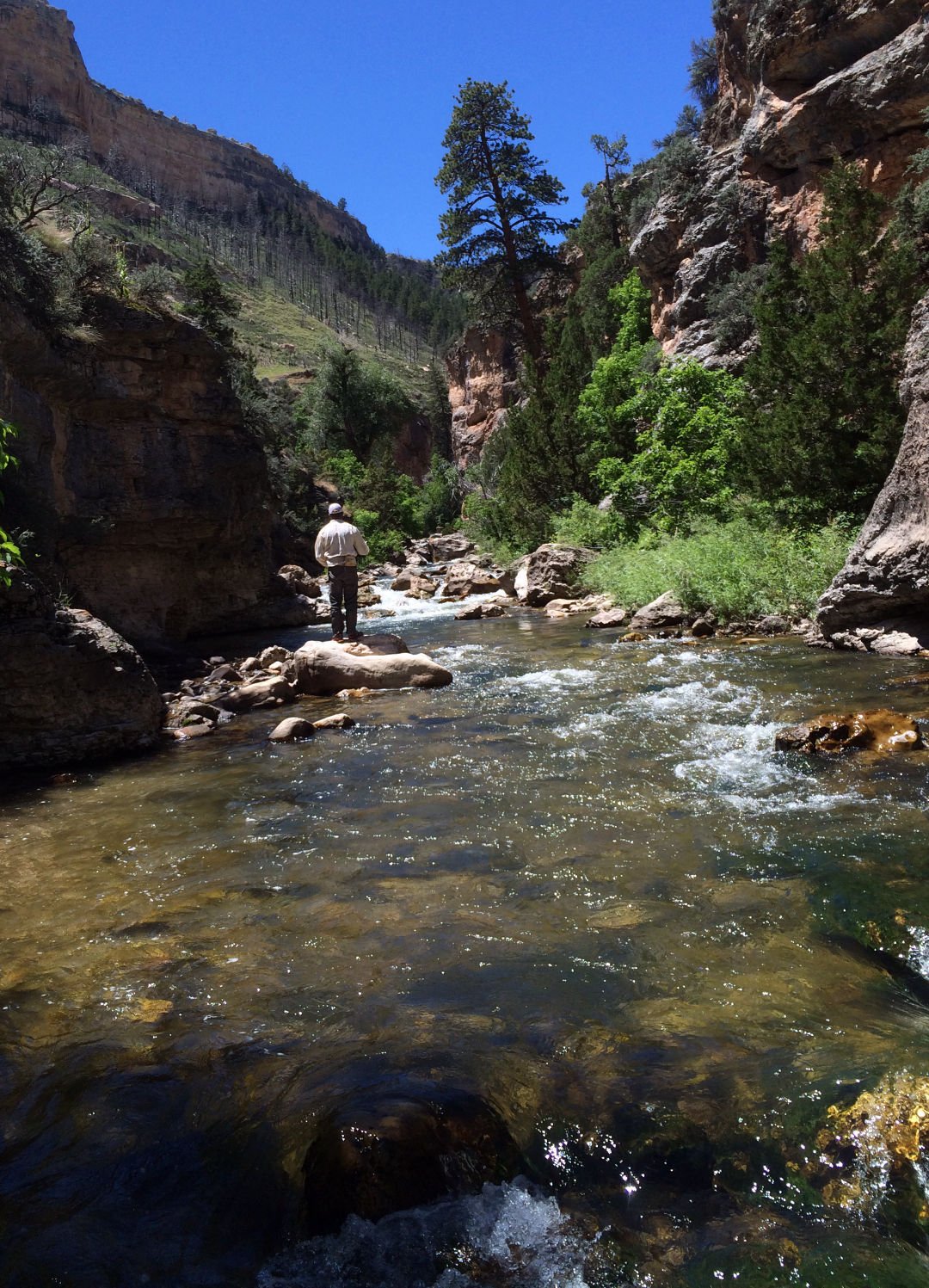 An angler fishes on the Middle Fork of the Powder River in Outlaw Canyon near Kaycee. 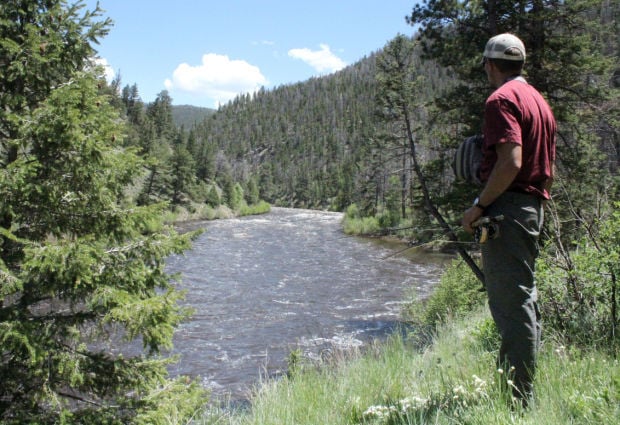 An angler looks at the upper North Platte River flowing through the Platte River Wilderness in southern Wyoming in 2014. 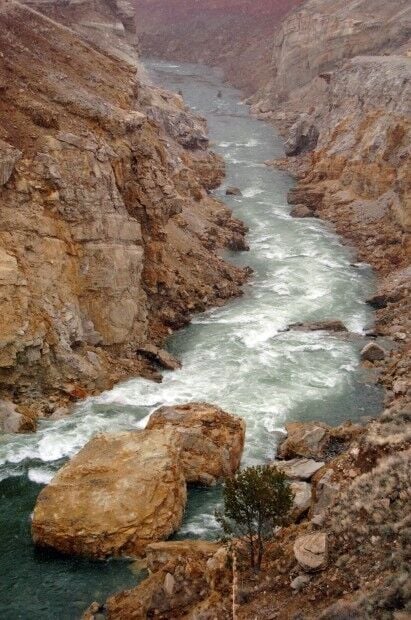 Wyoming measures blue ribbon fisheries by those with more than 600 pounds of fish per mile. It’s the highest honor a stream can receive in the state, achieved by only about 15 rivers.

Biologists credit the habitat and flushing flows from the Bureau of Reclamation for much of the abundance of trout. It’s also a tailwater, which means the water flows from a dam at the bottom of a reservoir. Tailwaters are generally more productive because temperatures stay cooler in the summer and warmer in the winter, helping trout’s ability to grow.

And anglers take advantage of teeming brown and rainbow trout populations. In 2009, the most recent data available, more than 18,000 anglers fished between Gray Reef and Robertson Road. That equaled more than 85,000 hours fishing, and it is likely a bit higher today.

While Gray Reef has plenty of fish, it’s not actually the fishiest stream in the state right now. The Shoshone River near Cody takes that prize, though Gray Reef may assume the top position again one day.

State fisheries experts broke down three other top Equality State streams by fish numbers and pounds for the Star-Tribune. And don’t worry. If your favorite river didn’t make the cut this time, it could be there in the future.

This iconic section of water near Kaycee tumbles through a rocky canyon and harbors more than 4,500 trout per mile, or about 3,200 pounds, said Smith. The rainbow and brown trout average between 11.5 and 12 inches long. Its perk? Not many people are willing to drive the long back roads and hike down the steep canyon trail to reach the river, which limits competition.

The top end of the Gray Reef section might not have quite the same number of fish as the bottom, but it’s still one of the top streams. Fisheries biologists have recorded just about 2,000 fish per mile at the Treasure Island area of the upper North Platte River near Saratoga. In pounds, that comes to about 1,300, Smith said. And it’s all wild trout. The river hasn’t been stocked since the mid-80s.

Sizes average about 10 inches for rainbow and brown trout, with the largest fish up to just about 23 inches.

The Shoshone River near Buffalo Bill Reservoir has always been a good fishery, but right now might be the height of its productivity, Smith said.

About 4,800 trout swim in the river per mile, which equals about 4,500 pounds of fish. The average brown trout is just over 11.5 inches and the biggest rainbow is over 13.5 inches. Some of the largest trout are over 21 inches long.

Smith credits the tailwater nature of the river, which keeps water a consistent temperature year round, as well as a large hot spring below the dam that helps keep the cold at bay in the winter.

The river has had years of high water and from abundant snow, which helped trout populations even more.

“We’ve really built a population of fish that’s probably reaching close to a historic high,” he said. “And it probably won’t last a heck of a long time.”

A Colorado biologist and district wildlife manager each spotted a litter of at least three wolf pups over the weekend with their parents, two adult wolves known to live in the state.

In 149 years, Yellowstone National Park has moved from horse-based transportation for visitors to the first testing of an electric shuttle capable of operating without a driver.

An angler holds a rainbow trout in the Gray Reef section of the North Platte River. In 2020, Gray Reef held 3,000 pounds of fish per mile.

An angler fishes on the Middle Fork of the Powder River in Outlaw Canyon near Kaycee.

An angler looks at the upper North Platte River flowing through the Platte River Wilderness in southern Wyoming in 2014.