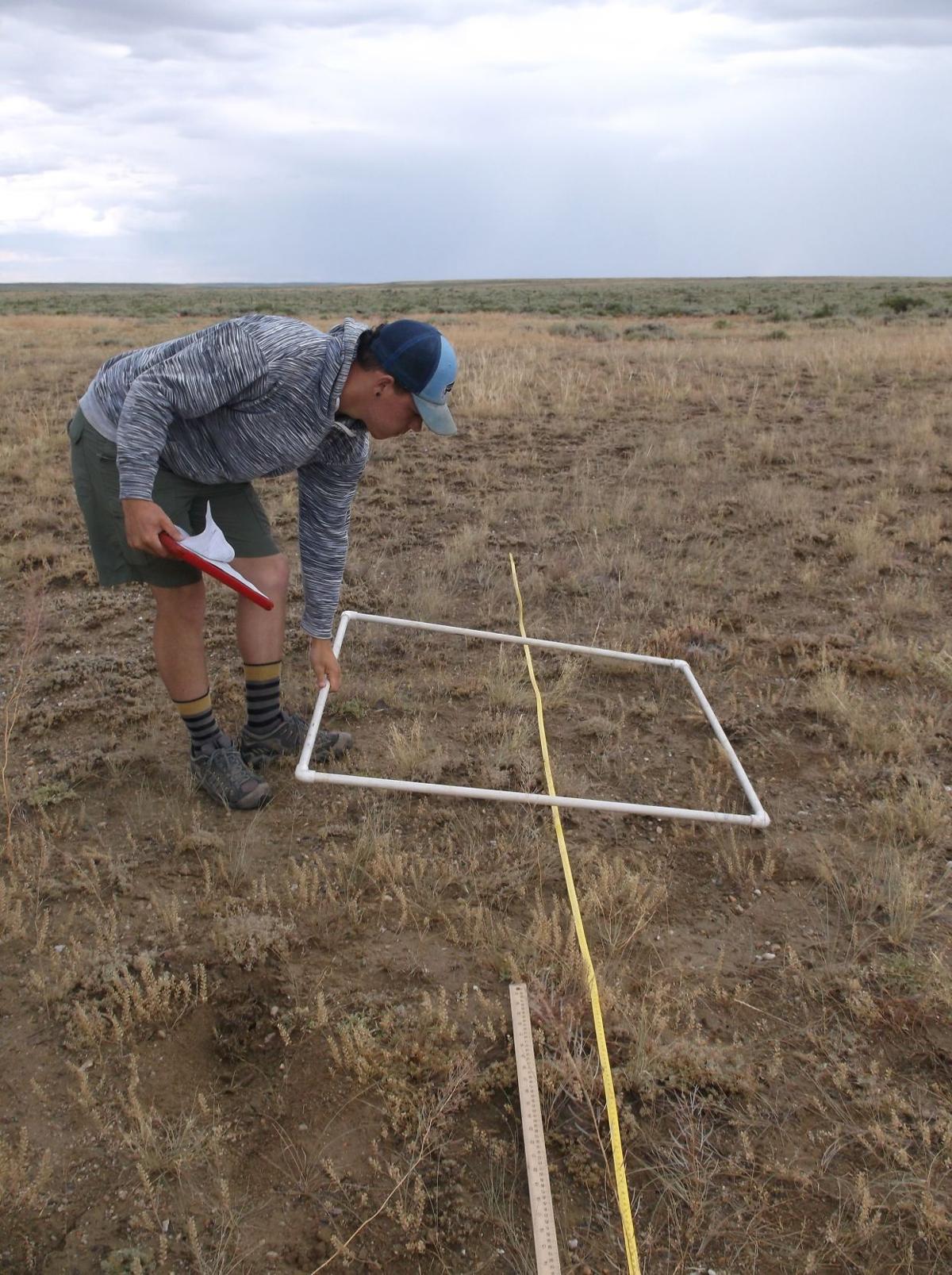 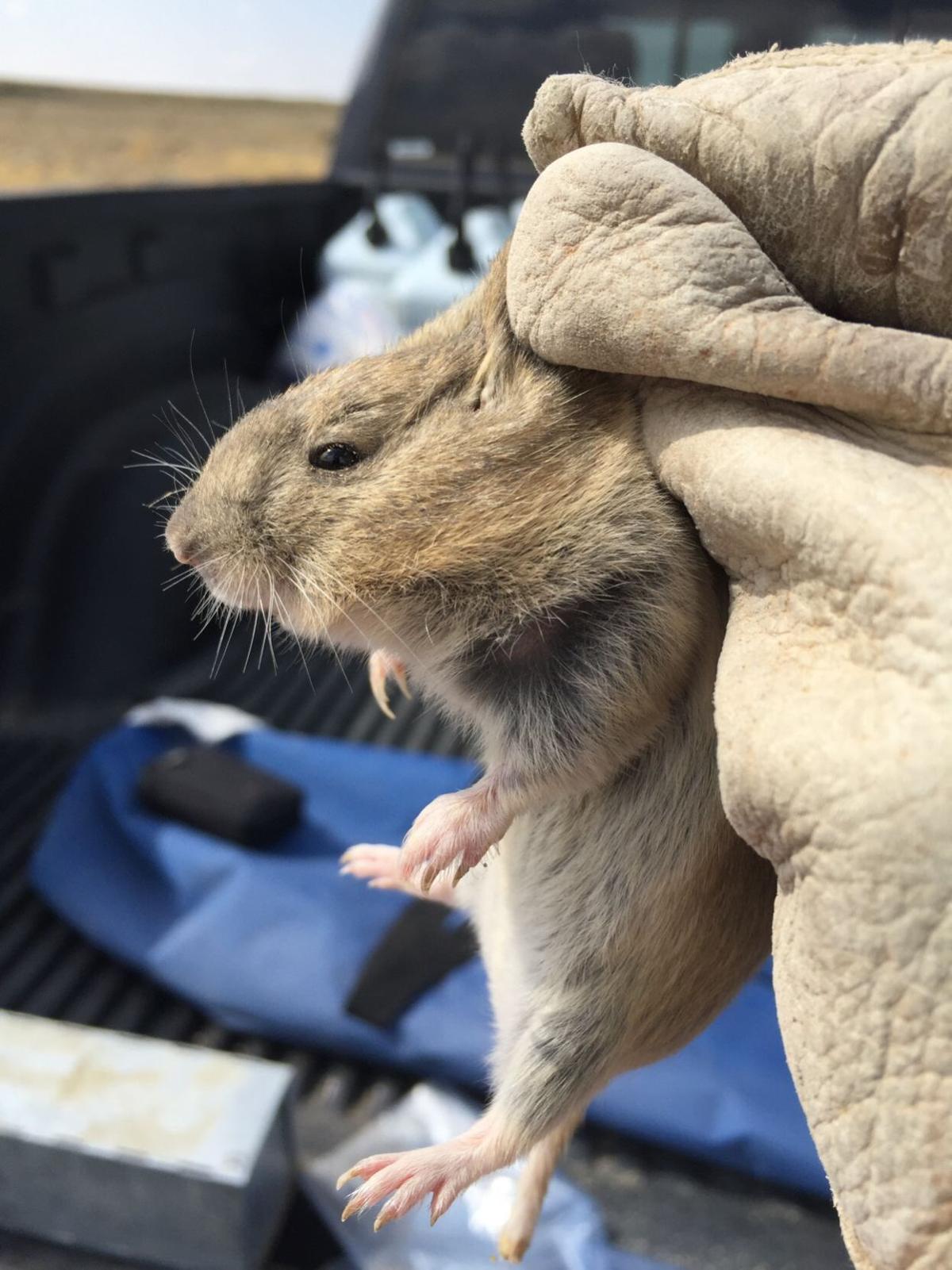 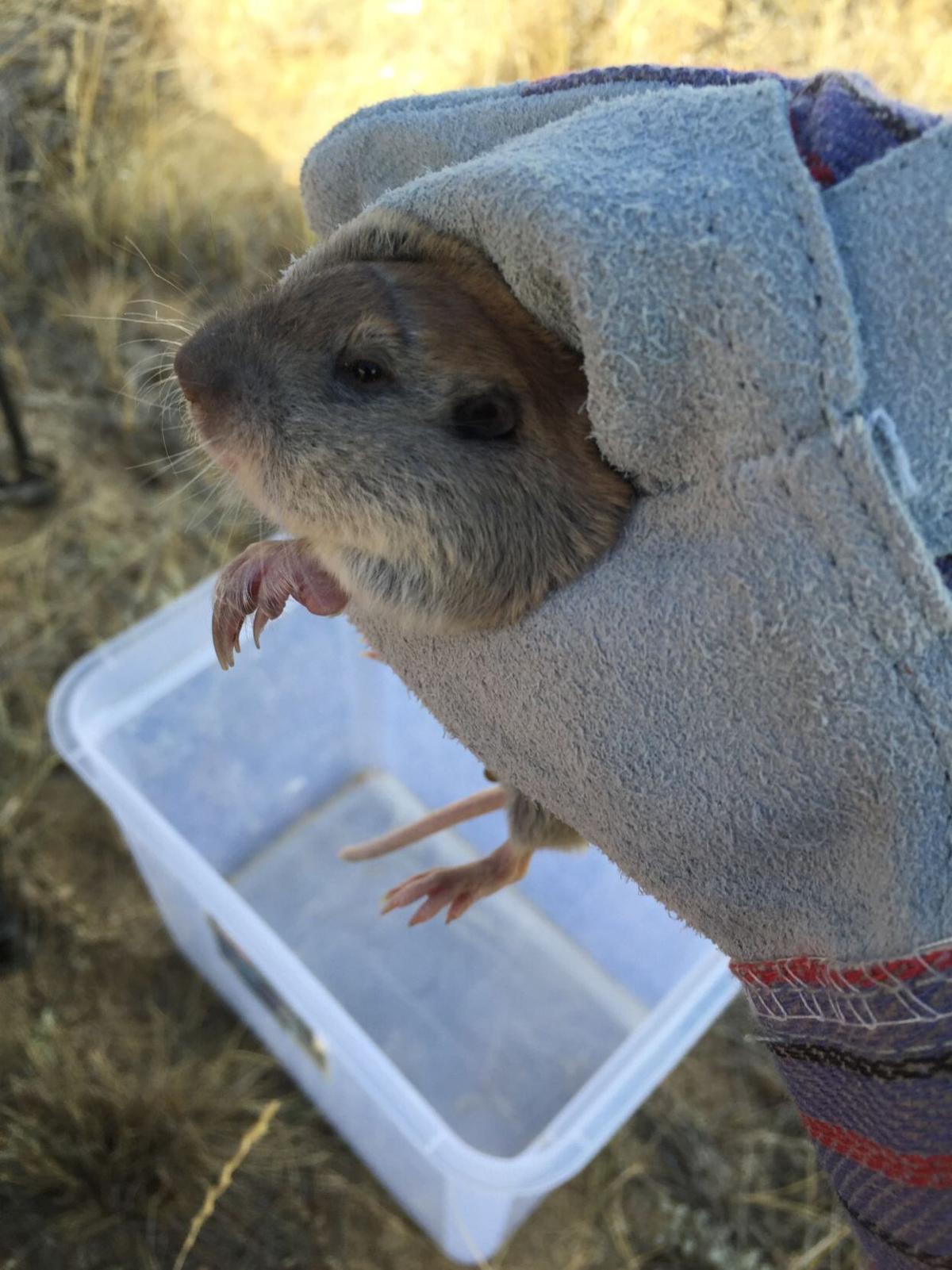 Researchers hold the northern pocket gopher, a pocket gopher species found across Wyoming and much of the West. 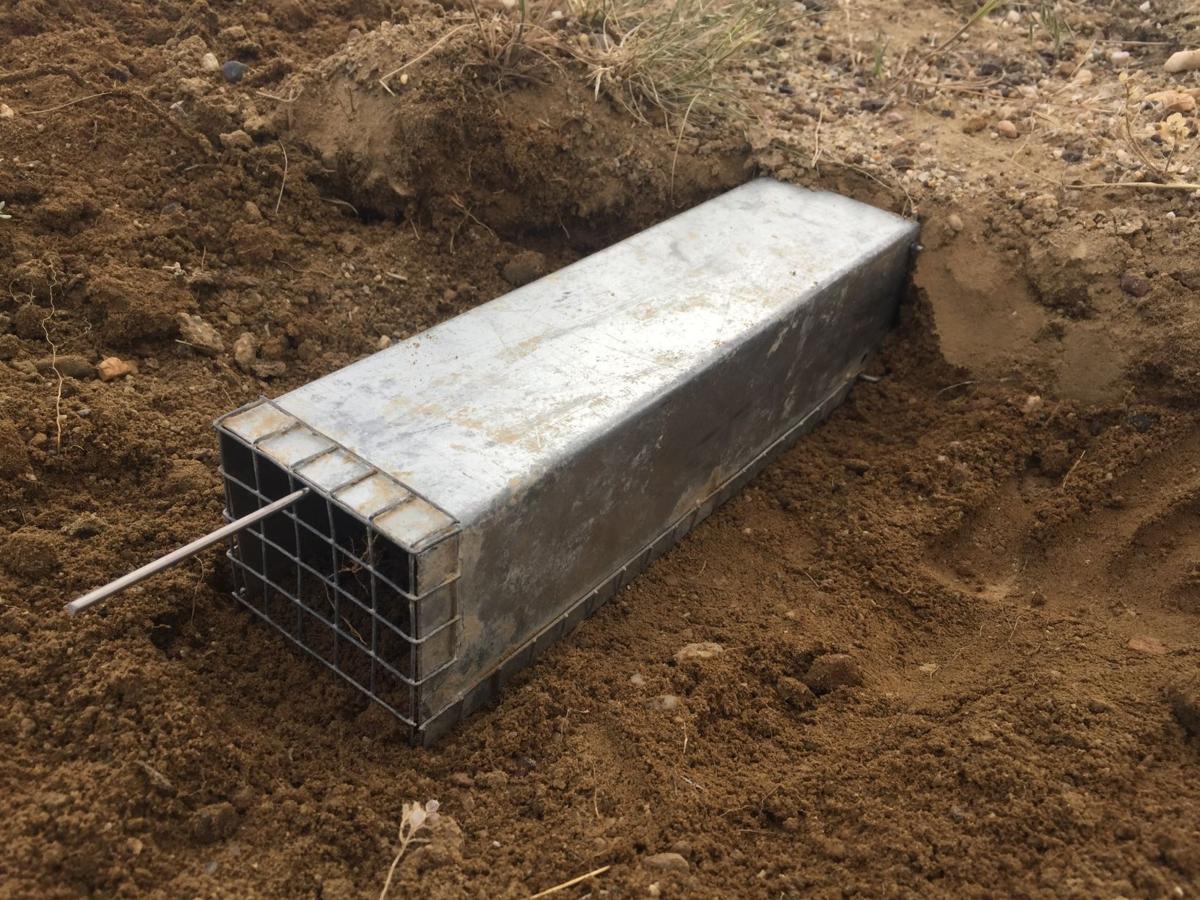 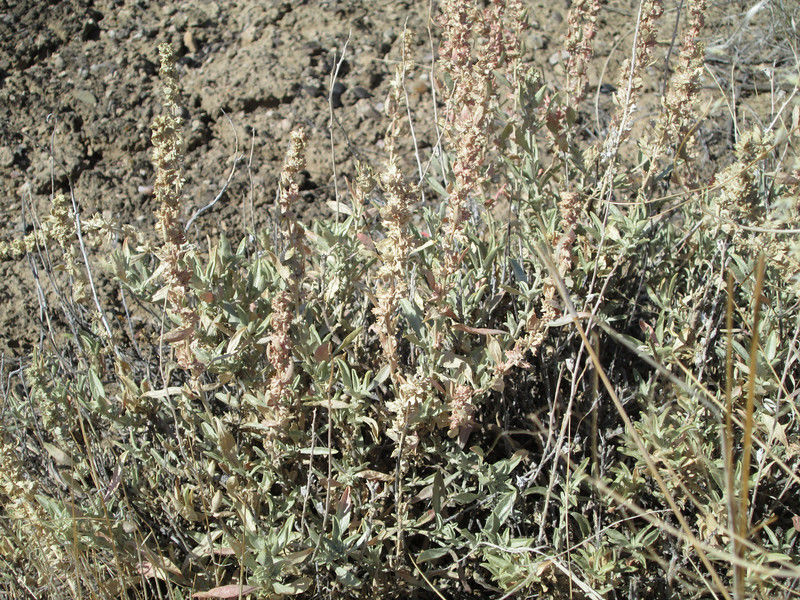 Gardner's saltbush grows in alkaline areas in Wyoming and is the primary food of the Wyoming pocket gopher.

It has tiny ears, a 2-to 3-inch tail, and cheeks pouches lined with fur for storing plants. Chances are, you’ve never seen it. Most of us haven’t. At most, you may have seen a soft dirt mound, a sign that the Wyoming pocket gopher burrowed somewhere underneath.

It was described more than 100 years ago, then declared a subspecies of another gopher until 1979 when it gained its own species status once again. Even now, research on Wyoming pocket gophers is scant — only three papers have ever been written on the creature that could fit in the palm of your hand. That’s why University of Wyoming graduate student Brittany Brito decided to focus on the Wyoming pocket gopher. But the answers she found only led to more questions.

And many of those questions are still some of the most basic that we already know about most species in Wyoming. The answers, wildlife experts say, are critical for the Wyoming pocket gopher’s future, one in which the creature will be required to coexist with the potential for booming oil, gas and wind development.

“If the Wyoming pocket gopher goes away likely no one will notice,” said Doug Keinath, a Wyoming pocket gopher researcher who is now a recovery coordinator for the U.S. Fish and Wildlife Service. “But it hurts my heart if we have any hand as humans in causing a whole species to disappear.

It would be easy to compare the Wyoming pocket gopher to other more well known species. It’s smaller than, say, the prairie dog, and with shorter tails than a ground squirrel. It eats vegetation, but almost exclusively roots of scraggly shrubs, rarely the leaves or stems sticking out above the surface. It looks like a mouse – but it isn’t a mouse.

And unlike nearly any other species in the Cowboy State, the pocket gopher stays underground essentially all of the time.

“If anybody sees a small critter running around, rarely is it a pocket gopher,” Brito said. “There’s a one in a million chance you may see one pop its head up. They don’t come above ground, and if they do it’s only one body length or two away from their tunnel to grab food.”

But all those characteristics apply to all pocket gophers. Dozens of pocket gopher species live in North and Central America.

In Wyoming, the northern pocket gopher lives across the plains. They have a black patch behind their ears. They’re equal-opportunity eaters.

They seemed, Keinath found, to be restricted to areas with a certain kind of plant called Gardner’s saltbush. Most of us have likely not given the saltbush much thought, either. It can be found in salt flats and grows generally about 6-to 8-inches high. As its name implies, it’s salty. The roots suck salt from alkaline soils into the plant, bursting cells in the leaves and leaving behind salt crystals. It’s how the plant likely evolved to protect itself from hungry herbivores. Not much can or wants to eat saltbush. Except, Keinath found, Wyoming’s shyest mammal.

Few wild animals would be considered easy to trap for study. Creatures like elk and mule deer gather in visible herds in the winter, but often require a helicopter to dart and net from the air.

Animals like wolverines are so rare biologists may only catch a handful in a winter.

Because the animals rarely leave the ground, researchers like Brito had to find fresh mounds of dirt and dig down to the tunnels. There they placed traps and camouflaged them with dirt. Unlike most animals from grizzly bears to prairie dogs that can be lured with tasty treats, pocket gophers didn’t want peanut butter or other common bait, she said. So researchers relied on hoping the gophers would be caught trying to plug the trap (it worked, mostly).

In three summers of trapping, she handled 110 pocket gophers. Each received a microchip the size of a grain of rice and had a quick physical.

She also collected feces to analyze their diets.

The salty plant may simply be what Wyoming pocket gophers evolved to eat in the face of a competing mammal despite its relatively unpalatable contents. Wyoming pocket gophers may also be able to digest the plant better than other creatures, just as the chisel-toothed kangaroo rat can shave salt off leaves to reach nutrients.

“There’s other things we identify with like pronghorn and black-footed ferrets but they occur all across the West,” Keinath said. “This occurs only in Wyoming and has our name associated with it. I feel responsible that it persists on the landscape.”

And if we care about the future of the only mammal exclusive to Wyoming, we must know and care about what that animal eats, Brito said.

Because as leasing for wind, oil and gas development explodes in Sweetwater and Carbon counties, so will the influx of roads, pads and other development. If the Wyoming pocket gopher requires a plant like Gardner’s saltbush to survive, land managers should know before a project begins the impact that development could have on the plant communities.

Environmental groups have twice petitioned the Wyoming pocket gopher for placement on the endangered species list. Wyoming’s only other endemic vertebrate – the Wyoming toad – is on the list. But a listing was rejected in 2007 and most recently in 2016 because of a lack of information on the species.

“We don’t know if their range is expanding or contracting,” Brito said, “because we have so few confirmed locations.”

For Brito and other researchers, population is just one more question to add to the list.

Stay warm, cross your fingers, and most importantly, stay safe.

The unpredictability of weather, wars and catastrophic events have always required adventure travel businesses to be prepared for the unexpected.

At a time when national politics could not seem more polarized, and state politicians are struggling with nearly unprecedented budget issues amid a global pandemic, Wyoming’s wildlife are also facing issues, some of which have been building for decades.

Researchers hold the northern pocket gopher, a pocket gopher species found across Wyoming and much of the West.

Gardner's saltbush grows in alkaline areas in Wyoming and is the primary food of the Wyoming pocket gopher.