We all have our own goals, our own intentions for summer and ways to relax. Some of us have families with little kids, some want to catch the biggest fish we can find, and some just want to relax.

Fortunately, we all live in Wyoming, a place that offers perfect opportunities for any number of summertime aims. And many places will suit a variety of needs.

Take a place like Curt Gowdy State Park in Laramie County. It’s humming most of the summer from visitation, and for good reason. The state park has reservoirs for fishing and boating, opportunities for stand-up paddleboarding and kayaking, camping and plenty of specially built, single-track trails. It also has an archery course for those keeping their skills sharp for hunting season. And it’s not the only place with plenty of choices.

Consider this a choose-your-own-fishing-adventure guide. We offer four scenarios that will fit most readers. Pick one and see where you should end up.

If you want to catch the biggest fish

But the 40-mile-long bucket straddling Wyoming and Utah’s borders isn’t the only place in the state you can catch fish so big your arms hurt from holding them, said Matt Hahn, Wyoming Game and Fish Department’s Casper fisheries supervisor.

“If you want to catch a big fish, and you don’t care what kind it is, carp are all over the state, and they get big everywhere,” he said. “They’re also available from shore and boats, and with a fly rod or bait.”

And he’s not exaggerating. The state record carp weighed more than 34 pounds.

But Wyoming’s channel catfish also grow exceptionally large. Biologists electrofished part of the North Platte River above Glendo Reservoir in 2020 to survey fish populations and caught a catfish that was too big for the scale to measure, which meant it was likely about 30 pounds.

The real river and lake monsters aren’t all that common, but most catfish in Glendo likely average about 25 to 30 inches and weigh 8 to 10 pounds, which is still a big fish.

But if you don’t have much time, and you want to catch something big, try the carp bite on any larger reservoir or river below 6,500 feet. You won’t be disappointed.

You want to fish, but your kids want to play

If you have children, especially small children, the quickest way to boredom for them and unpleasant fishing for you may be taking them to a river and asking them to stand by while you cast.

It might work for a while, but quickly your child is likely going to want to do something other than hang out on the bank. That’s why Hahn recommends heading somewhere with fish and also alternate forms of entertainment. Pathfinder and Alcova reservoirs west of Casper or Boysen Reservoir in Fremont County, are easy choices. All of them have areas with sandy beach and also plenty of fish.

“Go shore fishing on a big reservoir where they can run around and can go down the shore and ways and skip rocks, or play and wade and swim,” said Hahn, who has three kids of his own. “That’s what my kids do. They fish for a little while, then get bored and want to explore and build sand castles.”

Some parks like Glendo also have playground equipment for when the little angler really needs a break. Also, for any of us who need a reminder, bring along plenty of snacks, sunscreen, hats and water. The more special you make the fishing trip, the longer it will last, so bring those treats you may not usually offer. Don’t forget a change of clothes and coats, sweaters and rain jackets because Wyoming’s weather is anything but predictable.

You want to fish but don’t have a boat

Yes, it is possible to catch fish without a boat. It may be easier on some big reservoirs to use a boat to cover ground than to walk the shore for hours, but it’s still possible.

If you want to quickly catch fish, though, and don’t have means of over-water transportation, consider heading to the mountains.

Mountain lakes in most of Wyoming’s major ranges from the Snowies and Bighorns to Wyoming Range and Wind Rivers have plenty of trout either naturally reproducing or stocked by Game and Fish. Depending on where you are, you can expect to find lake, brook, cutthroat, rainbow, brown and even golden trout. And they’re usually hungry.

High mountain lakes and streams — particularly ones a bit off the beaten path — are usually teeming with hungry trout and don’t see as many flies and lures.

You won’t likely catch big trout, but you will catch plenty. Depending on the regulations, consider keeping a couple for dinner while you’re there.

You want a challenge

Most of us have some kind of goals. Some are athletic — running a marathon or riding 100 miles on a bike. Some are intellectual — reading a book a month or even a book a week. How about making a fishing goal?

Game and Fish offers a couple of its own pre-packaged goals that will likely also make you fish somewhere new.

The first is the Cutt-Slam, a contest of sorts established to encourage anglers to fish for Wyoming’s four native cutthroat trout strains. But it’s not enough just to catch a Snake River cutthroat. You also need to catch all four in their native drainages. Submit photos of your catches to Game and Fish and wait for your certificate and Cutt-Slam medallion (provided by Wyoming Trout Unlimited) to arrive in the mail.

You can also try the X-Stream Angler program, where you go fishing in at least three instream flow segments. Instream flows are areas where a certain amount of water is designated to stay in the river. Complete this one, and you’ll receive a hat.

These aren’t small fish. A brown trout and walleye must be at least 23 inches, a cutthroat trout at least 18, a northern pike at least 34 inches and a lake trout at least 36 inches. Catch five and you’ll earn a coin. Catch 10 and you get a plaque.

For more information on the contests or to submit for an award, go to wgfd.wyo.gov.

Help your child catch a fish

Fishing as a child can be fun. It can also be tough, depending on where you are. Fortunately, urban ponds across the state are stocked with big fish, and many of the ponds are tailored to youth fishing.

Huck Finn Pond in the middle of Laramie, for example, is stocked with catchable rainbow and cutthroat trout, and regulations dictate only anglers 14 years old and younger can fish there.

Yesness and Bryan Stock Trail ponds in Natrona County are also stocked with large fish that grow even larger.

And if your young angler is motivated by contests, check out Game and Fish’s Wyoming Youth Fish Challenge, which offers 11 different competitions.

Find urban or rural pond locations or learn more about youth fishing contests at wgfd.wyo.gov or call your local Game and Fish office. 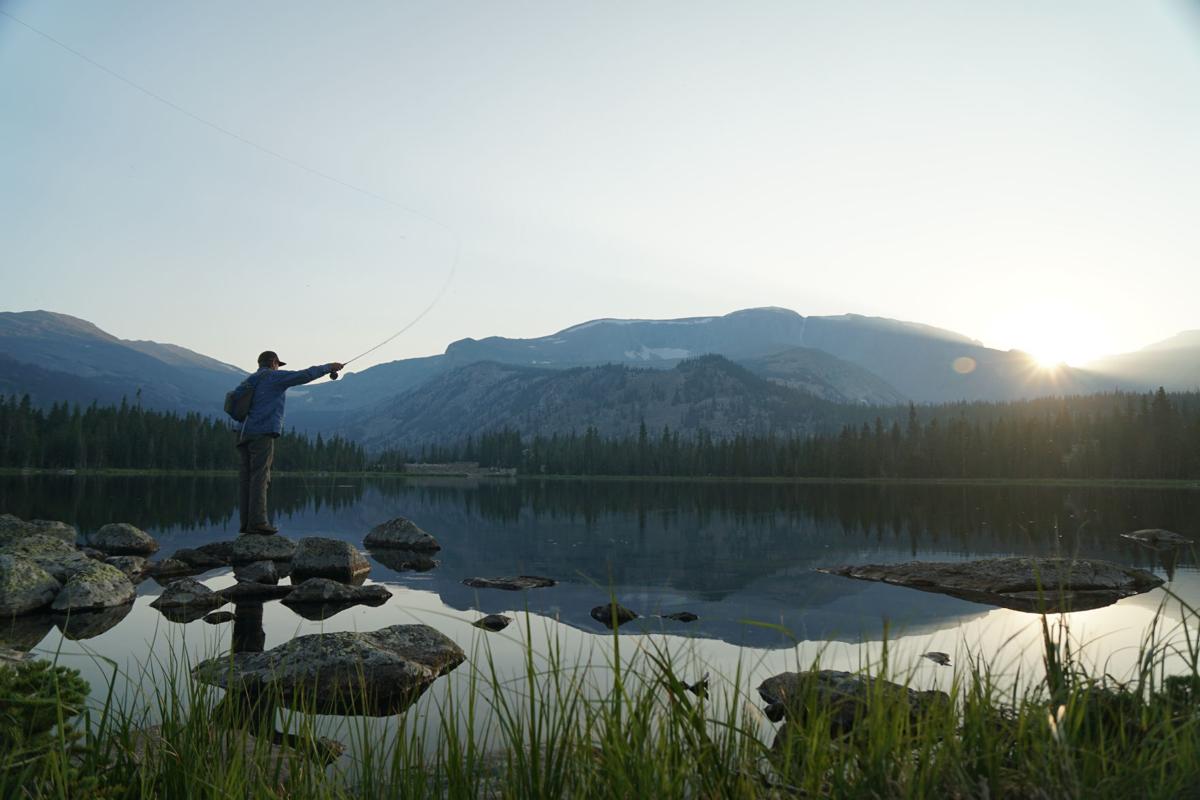 An angler casts his fly in July 2017 into Firehole Lake No. 1 in the Bighorn Mountains. 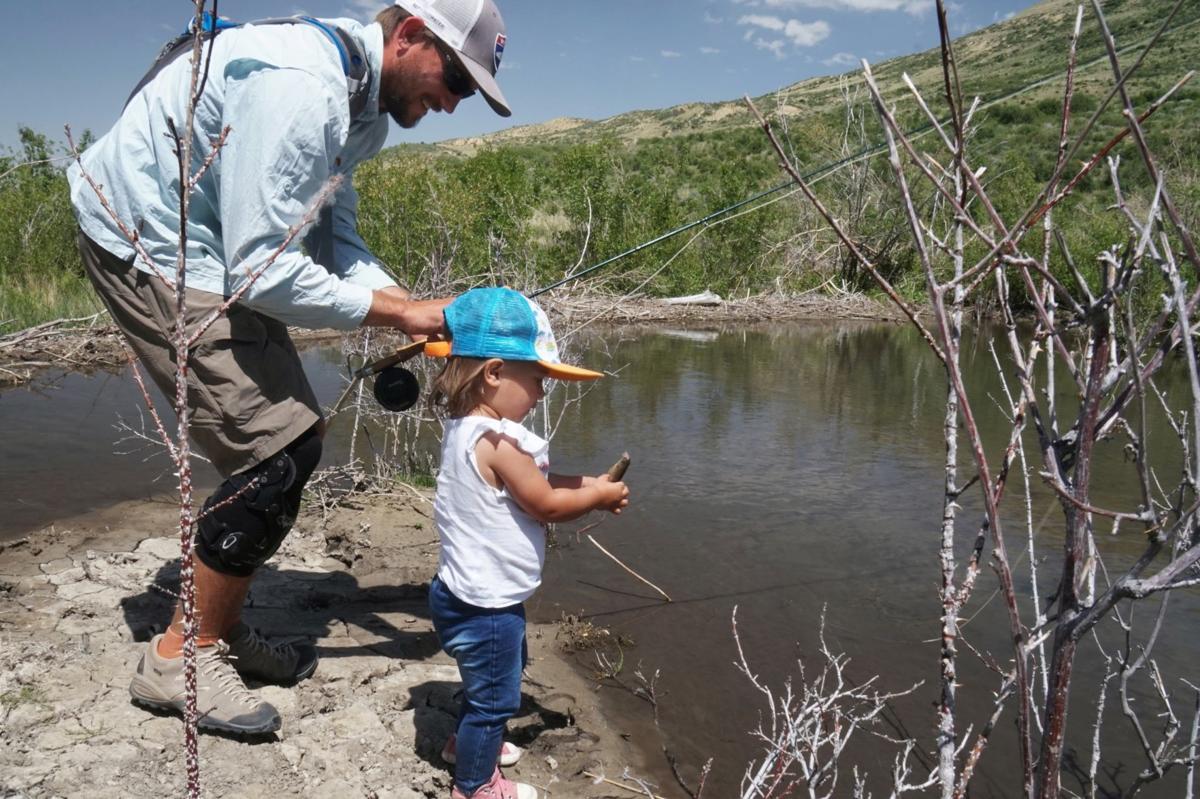 Josh Peterson helps his daughter catch a Colorado cutthroat trout in a beaver pond in southwest Wyoming. Off-the-beaten-path streams, ponds and lakes can be some of the easiest places to catch hungry trout. 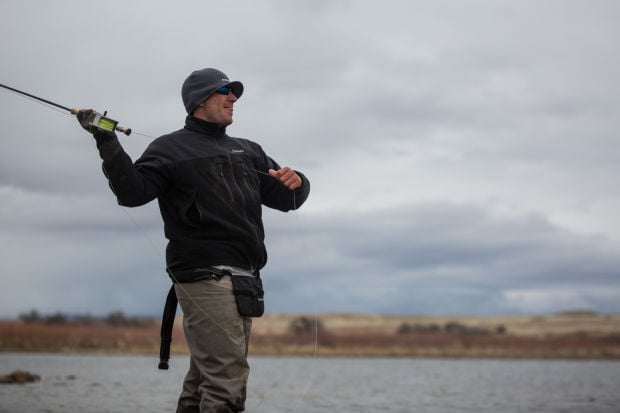 Theo Anest, of Alcova, fishes the North Platte River on March 24, 2015 below the Grey Reef Dam in Alcova. While fishing from a boat allows anglers to cover more ground, they can still be successful casting from the shore. 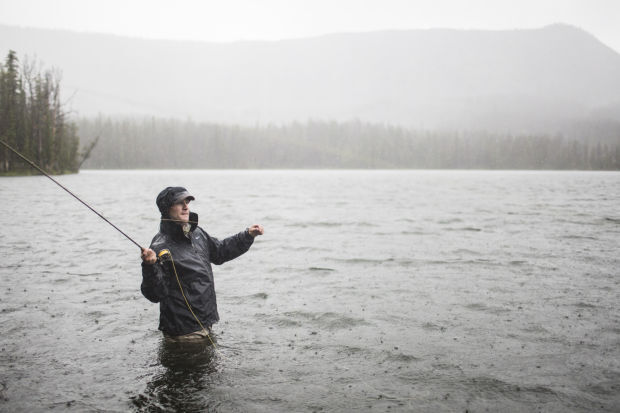