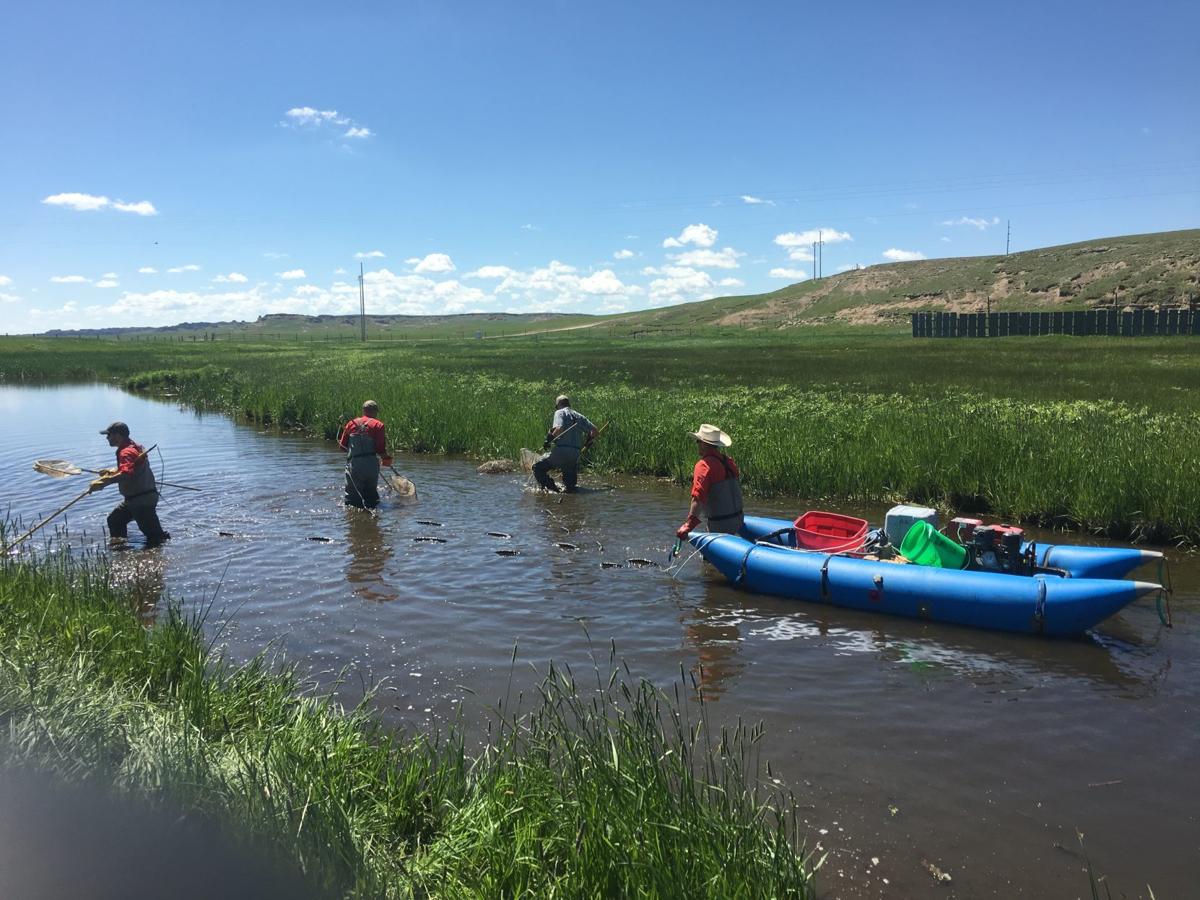 People electrofish for northern pike, an invasive species that found its way into the Niobrara River from Nebraska. 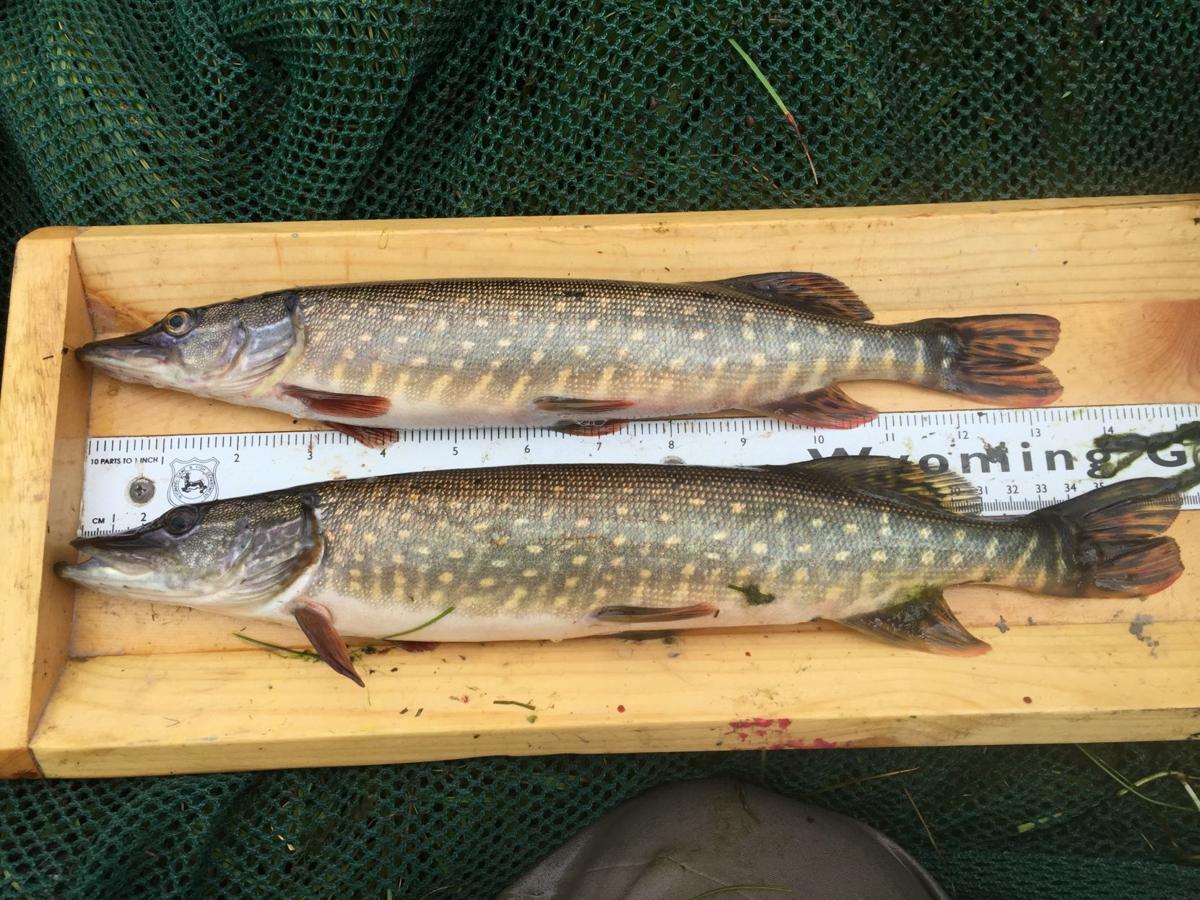 Though Nebraska officials stopped stocking pike in Box Butte Reservoir in the ‘80s, the northern pike's migration up the Niobrara River was already underway. 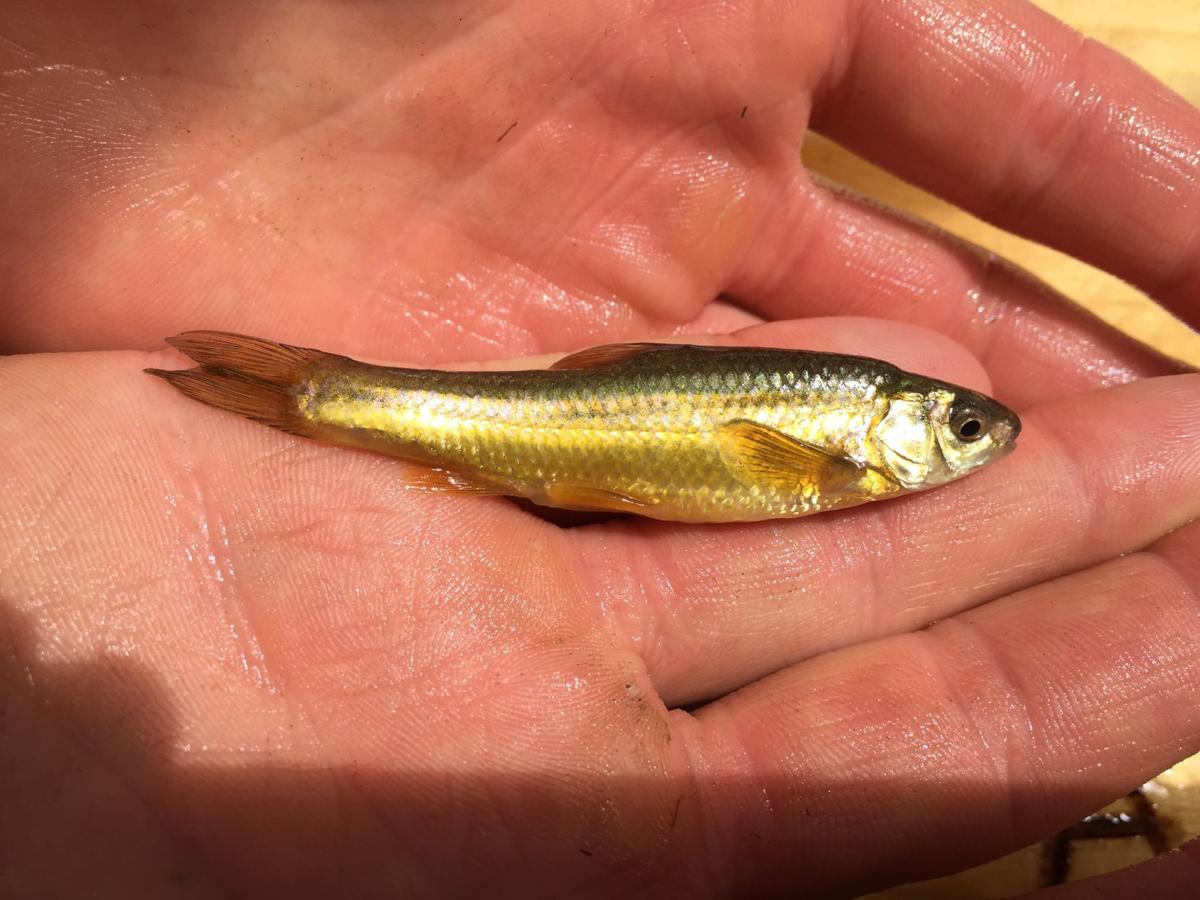 The brassy minnow, native to the Niobrara River, is a small fish growing no more than 3.5 inches. It is one of several in danger of the invasive northern pike. 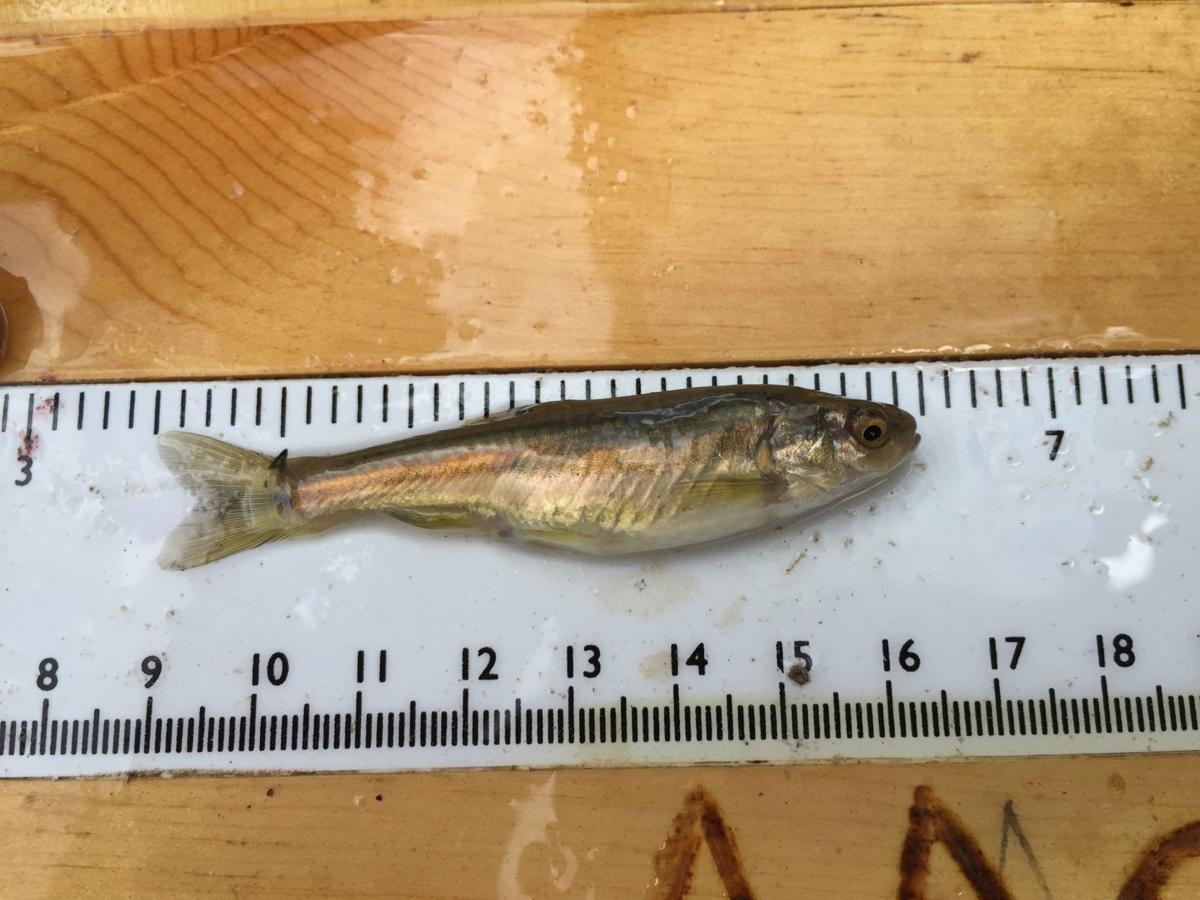 The finescale dace is one species of fish that thrived in the Niobrara River before northern pike were introduce 100 miles downstream and made their way into the Wyoming.

What once was a boon to the dozen or so native fish species swimming the waters of the Niobrara River may now become their enemy.

The Niobrara – less of a river and more of a series of puddles, ponds and sloughs pieced together from Manville to Nebraska – only turns into a proper river during thunderous rainstorms and flash floods. The sudden rush of water allowed those native northern pearl dace, finescale dace, Iowa darter and other minnow-looking fish to move from place to place, seeking new shelter, new food and new breeding areas. The surges of water kept the populations robust and healthy for thousands of years.

That was before humans introduced northern pike about 100 miles downstream. It was before those floods allowed pike to slowly migrate up into Wyoming. And it was before the voracious, nonnative predators began decimating those native populations.

“The native species have been here for thousands of years and in a lot of cases, they’re about the only species that can live in the area,” said Matt Hahn, fisheries supervisor for the Wyoming Game and Fish Department’s Casper region.

Now the Wyoming Game and Fish Department is faced with the possibility that they might not be able to protect some of those native fish. As fisheries biologists begin formal studies this summer and fall, some researchers hope it’s not too late.

The northern pearl dace and brassy minnow aren’t the most remarkable fish in Wyoming. Even the biggest ones measure no more than 3.5 inches, a far cry from 30 inch trophy brown trout. They’re not strong and feisty like a smallmouth bass, and they don’t make delicious table fare like a walleye.

But unlike any of those fish, the northern pearl dace, for example, has been in Wyoming since before the last ice age. And when glaciers receded, slicing into the landscape and leaving behind lakes, rivers and deep canyons, the little fish stayed in southeastern Wyoming, marooned away from the rest of its species more commonly found near the Great Lakes and the upper Midwest.

They’re notable for their small scales, which are bigger than a finescale dace but smaller than, say, a creek chub, said Evan Booher, a University of Wyoming graduate student who finishing his Master’s degree project on the finescale dace. They also have smaller mouths than the similar-looking chub.

The finescale dace, on the other hand, is only found in two drainages in Wyoming and known for its scales so fine they are almost imperceptible and a dusky line running parallel across their bodies. When they breed in the spring, the males will turn red and orange on their sides.

Booher and Hogberg admit they’re tough for the casual observer to tell apart, or to realize they’re different than any other minnow. But they are unique, and they’re part of what makes eastern Wyoming different than, say, western Wyoming, or California, or Maine. They’re part of what makes that strange, freshwater river system ecologically diverse. And they’re all part of a larger family called cyprinidae, which has thousands of species and is the most diverse fish family on the planet.

“The world would be less if the fish community everywhere you went looked the same, and we all had largemouth bass and pike and no sense of what is endemic to this place and endemic to that place,” said Nick Hogberg, Game and Fish’s statewide fisheries biologist. “I would hope everyone could appreciate a fish having lived in a certain location for thousands of years.”

Like so many other introductions of invasive fish species in the West, northern pike were brought to a reservoir in Nebraska for sportfishing. It was the ‘70s, and fisheries managers were less aware of issues that could be caused by nonnative species, especially nonnative species as aggressive and predatory as pike.

Northern pike are native to portions of the Midwest and central Canada, and are known for giant mouths full of razor sharp teeth. Left unchecked among species that did not evolve with them – thus not understanding how to hide and seek refuge – pike can destroy a fishery, Hahn said. The only other place they currently exist in Wyoming is Keyhole Reservoir where they live among other nonnative fish including walleye, perch and crappie.

Nebraska officials stopped stocking pike in Box Butte Reservoir in the ‘80s, but by then their migration up the Niobrara River was already underway. Wyoming biologists like Hahn and Hogberg knew they may be coming. They’d already been eviscerating the native fish populations in the Niobrara where it flows more consistently in our neighboring state.

But fisheries managers also wondered if perhaps some of Wyoming’s natural, and unnatural, barriers would keep pike downstream. So far, that hasn’t been the case.

But fisheries researchers still have reason for hope.

This summer, Hogberg is beginning a study using radio transmission tags on the pike to see where they move, where they breed and where they spend much of their time. The information could help biologists more efficiently target removal. Fisheries managers are also figuring out if pike are moving through the system every year, or if they arrived after one large water year, making removal more of a practical possibility.

Lastly, Booher studied options in his project of translocating finescale dace to areas inaccessible to pike and other nonnative predators to ensure their continued survival. Game and Fish is planning to move other species like the northern pearl dace as well.

As for the pike, biologists agree this is a system where they just don’t belong, no matter how much fun they can be to catch.

“You will never read about the Niobrara in American Angler, there’s pike there but not enough habitat to say it will be a great fishery,” Hahn said. “But there’s enough pike to wipe out the native fishery.”

Which is why Hahn, Hogberg, Booher and other fisheries managers are pleading with the public to not move any fish, especially predatory fish like pike, to any new areas.

Tourists change the way they use Grand Teton Park

A mixed bag for hunters this season in Wyoming

Reports of drought and hard winters mar much of Wyoming’s hunting season forecast, but wildlife managers say plenty of opportunity remain for a successful fall.

Just south of Mammoth Hot Springs, near the north entrance of Yellowstone National Park, lies a jumble of white/gray rock known as the Hoodoos or, more formally, Silver Gate. The origin of this deposit is a quintessential tale of the dynamic nature of Yellowstone.

People electrofish for northern pike, an invasive species that found its way into the Niobrara River from Nebraska.

Though Nebraska officials stopped stocking pike in Box Butte Reservoir in the ‘80s, the northern pike's migration up the Niobrara River was already underway.

The brassy minnow, native to the Niobrara River, is a small fish growing no more than 3.5 inches. It is one of several in danger of the invasive northern pike.

The finescale dace is one species of fish that thrived in the Niobrara River before northern pike were introduce 100 miles downstream and made their way into the Wyoming.