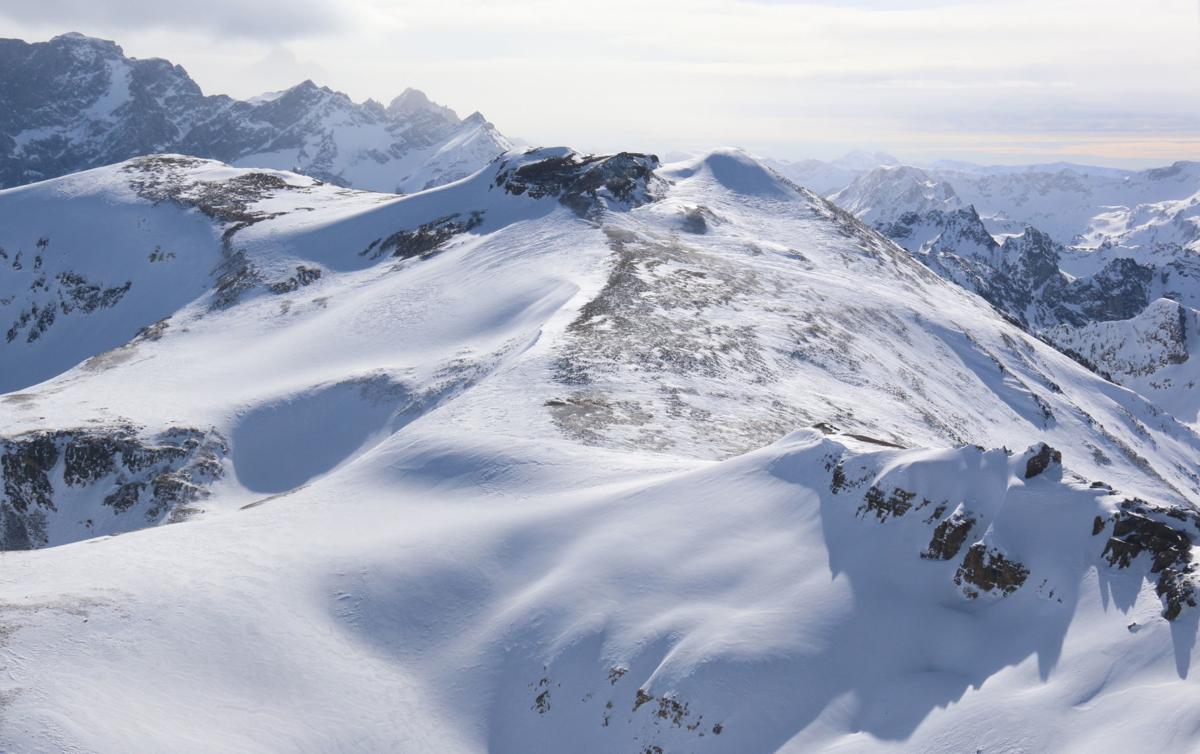 The Teton Range bighorn sheep herd lives high above treeline year round, unlike most big game that move to lower elevations in the winter. Biologists say the herd is in peril as its numbers decline and face threats from nonnative mountain goats, habitat loss and backcountry recreationists. 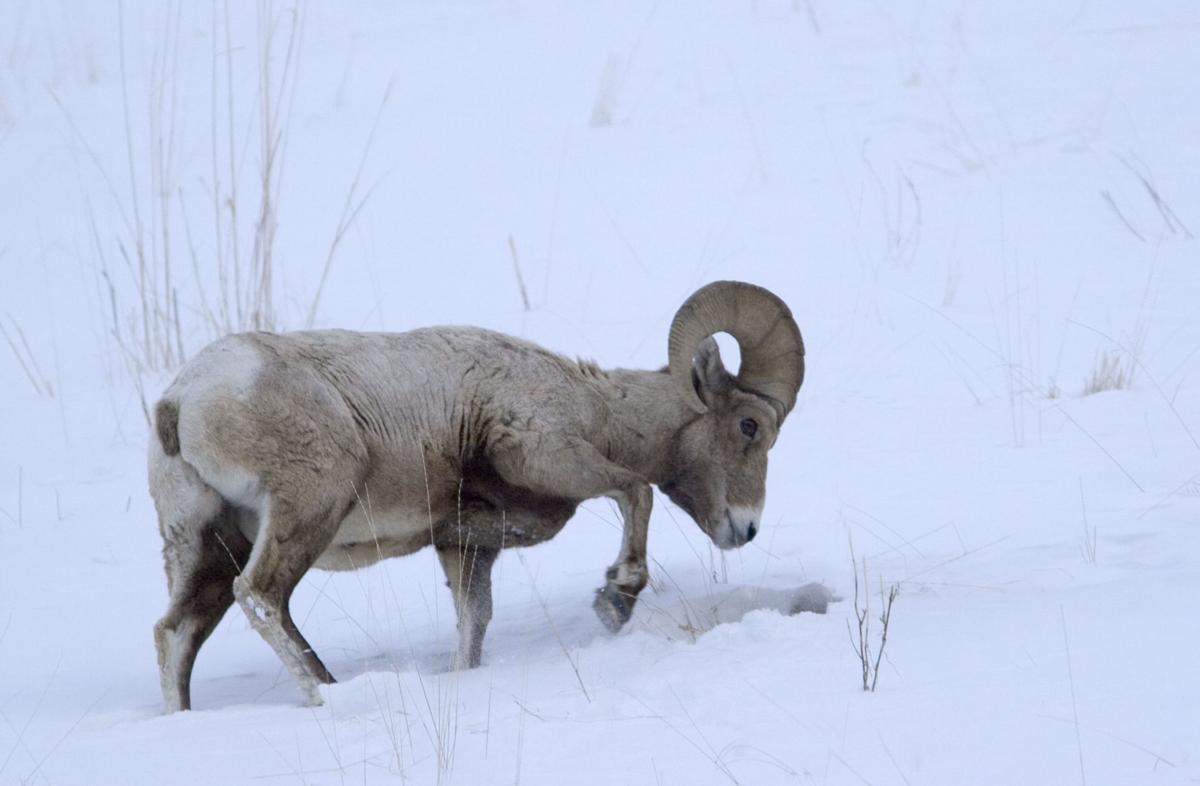 A bighorn sheep ram walks through snow in the winter in northwest Wyoming. Bighorn sheep numbers across the state are a fraction of what they were historically, but a small herd in the Teton Range is in particular danger, biologists say.

They’re rarely seen from highways, chairlifts or hiking trails. They eke out an existence at elevations far above tree line, spending three to four months of the year in temperatures as low as 40 below zero and winds strong enough to keep the snow away.

They eat whatever grass is dried and left over from fall or scrape lichen off of rocks. They hunker down in their thick fur coats and spend hours completely still.

“They represent a population that has been there since the last Ice Age,” said biologist Michael Whitfield. “They have been isolated and genetically inbred to a degree, but they still represent a success in that they’ve been able to hang on in a very tough environment.”

Whitfield was the first biologist to prove sheep still remained in the Tetons when the U.S. Forest Service and other agencies declared them extinct. At the time, the rare herd’s numbers hovered between 125 and 150, large enough to persist but fragile enough to raise concerns.

But now, after thousands of years of survival and decades of study, what could arguably be the state’s toughest bighorn sheep herd is facing a cliff it may not be able to conquer. Their winter range is shrinking. Nonnative mountain goats are moving closer, carrying deadly bacteria and competing for food. Increasing numbers of backcountry skiers are creating even more pressure.

Their numbers have dropped by almost half.

It’s fitting then, that one of the state’s most unique herds could find salvation in an equally unique collaboration, as biologists, land managers, nonprofits and recreationists come together to try to save the creatures before they’re gone.

“The Tetons are wild country, and it’s an iconic national park and wilderness and the bighorn sheep are symbolic of that,” Whitfield said. “They are the symbol of a special place.”

Bighorn sheep are no stranger to perils. Those that survived destructive trophy hunting faced decimation by diseases such as pneumonia and habitat loss.

For one of the West’s toughest animals, they have fared poorly in the face of progress.

No one knows how many sheep originally comprised the Teton herd. But statewide, bighorn sheep once numbered in the tens of thousands. Today, after decades of restoration attempts, there are about 6,500.

Even among the state’s scattered and often unique herds, the Teton herd is one of the oddest, said Aly Courtemanch, a wildlife biologist with the Wyoming Game and Fish Department in Jackson. It never was lost and then restored with transplant sheep from other places. It also doesn’t migrate.

Most bighorn sheep, similar to other western big game, move from summer pasture in the mountains to winter range in the low country. The Teton herd likely also migrated south to the Jackson valley and west to Idaho. But by the 1950s, it had stopped.

Roads and housing development cut off access to lower areas. Part of the herd simply stayed at elevations approaching 11,000 feet.

Whitfield studied the herd for the Forest Service. Courtemanch began studying them in 2008 for the Cooperative Fish and Wildlife Unit at the University of Wyoming.

As threats to the herd’s success came to light, agencies and nonprofits banded together to fight them. Groups like the Wyoming Wild Sheep Foundation bought nearby domestic sheep leases from willing sellers to prevent comingling. Others tried prescribed burns to improve habitat and two areas of the park have been closed to winter recreation.

While its numbers were low, the herd was stable.

But then that unsteady balance faltered. The herd has as few as 60 to 80 animals now, and additional threats loom. One illness, or a few bad winters, could spell doom.

“We’ve seen a decline, and I think the concerns we have now have always been concerns to some extent that at some point this population will trend towards blinking out unless we address some of these issues,” she said. “Whether that’s in the next few years or the next few decades, having a small population of sheep in there is concerning.”

One of the biggest threats to the sheep herd comes not from humans or domestic animals, but from mountain goats, an equally gregarious four-legged beast.

Idaho introduced mountain goats to the Snake River Range in 1969, and by the ‘70s, they moved north into the park. Nannies with kids have been documented in Grand Teton since 2008.

The danger is two-fold, said Sarah Dewey, a wildlife biologist with Grand Teton National Park who has studied the herd since 2003.

Competition is made tougher by a shrinking winter range. Bighorn sheep rely on vast, open areas to see predators and escape. Decades of fire suppression means more trees and less areas like cliff bands where the creatures feel safe.

The second issue is the possibility that mountain goats will carry and then introduce deadly pneumonia pathogens into the herd by rubbing noses with a curious sheep.

Goats within the park have tested positive in the past for the bacteria that causes pneumonia, Dewey said.

“It took nearly 40 years from the original introduction for mountain goats to become established and seriously threaten the native bighorn sheep and the ecological integrity of the Teton Range. In another 40 years will bighorn sheep still reside in the Teton Range?” Dewey wrote in an article for the Wyoming Wild Sheep Foundation’s Rampage magazine. “We’re at conservation crossroads that has implications too important to be left up to chance.”

The Park Service is working on a plan to possibly address the goat issue, and hopes to have something for the public later this year.

“What we’re trying to do is manage a nonnative species that is a potential threat to a native species whose status is very tenuous,” Dewey said.

For an animal living off of fat supplies generated over summer, every calorie burned means one less saved for later. That makes moving a costly endeavor.

Motorized transportation isn’t allowed in much of their wilderness range, but within the last 10 years the herd has been scattered by a relatively quiet intruder: backcountry skiers.

Courtemanch worked on a project a decade ago where she collared 28 female sheep and asked hundreds of skiers to carry location beacons to track their movements. The results showed that not only did bighorn sheep avoid good habitat if skiers were present, they also moved more on a daily basis if they saw humans.

“They are burning a lot more calories and aren’t able to conserve that energy,” Courtemanch said. “That’s an issue we’re definitely concerned about as backcountry skier numbers in the Tetons increase.”

But a solution, Courtemanch said, should not come from a governmental agency, it should come from the skiers themselves.

He has met with the working group and reached out to other backcountry recreationists. He blames a general lack of awareness of the issue. If skiers don’t know the herd is there, they can’t avoid the areas.

“You don’t see there’s an impact occurring because the impact occurred long before you ever arrived at the area,” he said. “We’re focused on the trail or line we’re skiing and we don’t perceive there is an impact, so I’m trying to help the recreational community try and become more aware.”

Despite the laundry list of threats, biologists believe the herd can be protected.

The Forest Service could try prescribed burns. Natural wildfires could be allowed to burn in certain areas.

Sheep from other places could be transplanted in, though that also carries a host of issues from diseases to a simple inability to survive at year-long high altitudes.

Mountain goats could be hunted or trapped and relocated elsewhere.

Skiers like Metten want to step up the public information campaign about the importance of seasonal closures and how to avoid wildlife sensitive areas.

No matter what, all parties agree the solutions needs to come from a collaboration.

“We’re trying to do the reverse of the typically bureaucratic approach here where an agency issues a statement and recommendations,” said Steve Kilpatrick, executive director of the Wyoming Wild Sheep Foundation. “We want to have a community-based recommendation addressing how valuable this herd is to the community.”

Because losing the herd means at least 100 fewer bighorn sheep, he said. It means the loss of something wild that has persisted for millennia and deserves to survive for more.

University of Wyoming research shows big game learn how to migrate from others, not instinct

Across Wyoming and the West, tens of thousands of big game animals are beginning their annual migrations from summer to winter range. They’ll …

A Wyoming billionaire has revealed he plans to donate $1 billion to conserving public lands and oceans over the next 10 years.

The Teton Range bighorn sheep herd lives high above treeline year round, unlike most big game that move to lower elevations in the winter. Biologists say the herd is in peril as its numbers decline and face threats from nonnative mountain goats, habitat loss and backcountry recreationists.

A bighorn sheep ram walks through snow in the winter in northwest Wyoming. Bighorn sheep numbers across the state are a fraction of what they were historically, but a small herd in the Teton Range is in particular danger, biologists say.