Details regarding the rescue and investigation into the grizzly bear mauling of a 40-year-old West Yellowstone man in April have been published in a U.S. Fish and Wildlife Service fatality report, yet some questions remain unanswered.

Charles “Carl” W. Mock IV died on April 17 in an Idaho hospital following surgery for severe injuries inflicted two days earlier by a 411-pound male grizzly bear. The bear attacked after Mock walked too close to a moose carcass the grizzly was feeding on.

The bear may have been more aggressive than usual due to a recent fight with another bear, investigators theorized. This is based on the contents of the bear’s stomach, which included tissue from another grizzly.

“That totally surprised me,” said Kevin Frey, bear management specialist with Montana Fish, Wildlife & Parks, who helped investigate the incident. He added that investigators couldn’t confirm the theory but it helped explain why it was “super defensive.”

Mock suffered severe injuries to his head and neck in the attack. Although he was carrying bear spray that he was able to discharge, evidence of which was found on the bear’s hide and Mock’s clothing, it’s unclear if he was able to deploy the spray before the attack or as he was being mauled.

Mock was the first of two grizzly mauling victims in Montana this year. The second was 65-year-old Leah Davis Lokan, of Chico, California, who was dragged from her tent on July 6 by a 417-pound, 4-year-old grizzly near the community of Ovando. Lokan was camping out during a bicycle trip through the area. The bear was shot three days later by wildlife managers as it approached nearby chicken coops.

“I think it’s a sign of bear density, bear distribution and the human level of activity has greatly increased,” Frey said.

The grizzly that attacked Mock was also shot by law enforcement officers as they investigated his attack the following day. The grizzly acted aggressively — charging to within 24 yards of two Forest Service law enforcement officers, three Montana Fish, Wildlife & Parks wardens, two FWP bear specialists and a dog — despite their repeated attempts to scare the bear off by firing seven cracker shell rounds as they approached the site.

“Most bears that own something, so to speak, will back off” with so much human activity that the previous day had included sirens, a helicopter flying over and lots of vehicles, Frey said. “He stayed around. The bear had options to go a lot of places.”

The charging grizzly had to plow through loose snow in a marshy area, slowing its advance and giving the team time to realize the bear was not going to halt, known as a bluff charge.

“In the event the bear cleared the deep snow and regained traction, there would be no time for the team to react before contact was made with a human, resulting in serious injury or death,” wrote Robert Pohle, an FWP game warden involved in the investigation. “In the split second it took to process what was taking place, I made the decision I was going to engage the bear and shoot it before it was able to gain traction again. I called out loud that I was taking a shot, before firing my shotgun.”

Multiple shots were fired, including large 540-grain bullets from a .45-70 rifle, which stopped the bear’s charge. Until the investigators confirmed the bear was a lone male, however, they remained on high alert in case it was a female with cubs. During the charge, the bear had run over the moose carcass it had cached in a swampy area, although it was difficult to see as the moose was almost completely buried.

After news of Mock’s mauling circulated in the small community of West Yellowstone, and even as rescuers were responding, wildlife photographers were apparently in the area near Baker’s Hole Campground.

“Between the attack and when investigators returned to the scene the following day, law enforcement made multiple contacts of people trying to access the closure area,” Pohle wrote.

These included one individual Pohle and a Forest Service officer encountered. The person told them, “they had heard of a bear attack and were out looking to take pictures of the bear.

“News of bear activity was drawing them in,” Pohle wrote.

“In a general sense, those (photographers) push it beyond limits I can’t believe sometimes,” Frey said.

“It’s bizarre they think it’s OK to take a picture of a bear that just mauled somebody.”

The question that remains unanswered is whether Mock knew of a bear in the area and was seeking it out to photograph when he was mauled.

“It cannot be determined if Mr. Mock purposely or randomly went to the site of the attack,” the report noted.

Mock was carrying a digital camera with a telephoto lens, as well as fishing gear. He did possess a Montana fishing license, but fishing in Yellowstone National Park had not yet opened. Mock had parked his vehicle at the Baker’s Hole Campground, but the attack occurred to the south, away from the nearby Madison River to the north. In the direction Mock was traveling, the closest the Madison River would have been is inside the park boundary about 450 yards away.

“Field investigation and examination of Mr. Mock’s fishing gear did not indicate he was or had been actively fishing when the attack occurred,” the report said.

Mock’s 911 call was recorded, lasting for more than 49 minutes. Twenty-seven minutes into the call the dispatcher asked Mock if he was going fishing when he was attacked. He responded, “No, I was taking pictures.”

The digital card in Mock’s camera contained no images of the bear, however, the camera was not secured at the scene of the attack. Instead, it was placed in Mock’s vehicle which was taken by friends from the campground.

“Whether any pictures were removed before my observation is unknown, as control was lost over the camera,” Pohle wrote.

Mock did not talk to his rescuers and was not interviewed by investigators following hospitalization due to his severe injuries.

“There are a lot of inferences you can make, but we can’t substantiate any conclusions,” Frey said.

The bear that attacked Mock was a known 20-year-old male that had been captured in September 2003 near Cascade Creek, which is northwest of Canyon Village in Yellowstone National Park. He was caught as part of the park’s annual grizzly study. After being captured, the bear was tattooed and collared. The bear’s last known location was the following February when it was denned north of Norris Geyser Basin.

The bear had no history of run-ins with humans.

Considering its age, and the fact that it had only recently come out of hibernation, the 411-pound bear was fairly healthy, with a few worn and broken teeth. The necropsy included a rabies test, which was negative.

Following the attack, the moose carcass was blown to bits by explosives to avoid attracting other predators. The campground and area near the attack were closed by Custer Gallatin National Forest officials until the moose remains had time to deteriorate or be consumed by other wildlife.

“The tragic event of Mr. Mock being attacked by an adult male grizzly bear and subsequently dying from the attack, was the direct result of Mr. Mock’s own purposeful or random placed proximity to a moose carcass that an adult male bear had cached and was actively feeding on,” the investigation concluded. “A short time before the adult male bear attacked Mr. Mock it may have defended or claimed the moose carcass from another grizzly bear. If so, this would have contributed to the bear’s extended aggressive defense of the moose carcass.”

Prior to this year’s two grizzly maulings, Montana had not seen a fatal grizzly attack since 2010 when a female grizzly and its three yearlings injured two campers at Soda Butte Campground near Cooke City before killing Kevin Kammer. Kammer’s body was partially consumed. The adult bear was captured and killed while the three yearlings were placed in zoos.

“2010 was the start of a new era,” Frey said, which has seen six fatal grizzly maulings in the Greater Yellowstone Ecosystem, three of which were inside Yellowstone National Park. Since 1892, grizzlies have killed 18 people in the GYE. In comparison, 24 GYE grizzly deaths have been recorded.

Considering that millions of people now visit Yellowstone, the park’s website said the chances of being attacked by a grizzly are one in 2.7 million.

Caldera Chronicles: A glimpse into Yellowstone Lake's past

The combination of data from the Yellowstone Lake core provides clear evidence that the sensitive ecosystems of Yellowstone National Park have been substantially influenced by climate at various times. 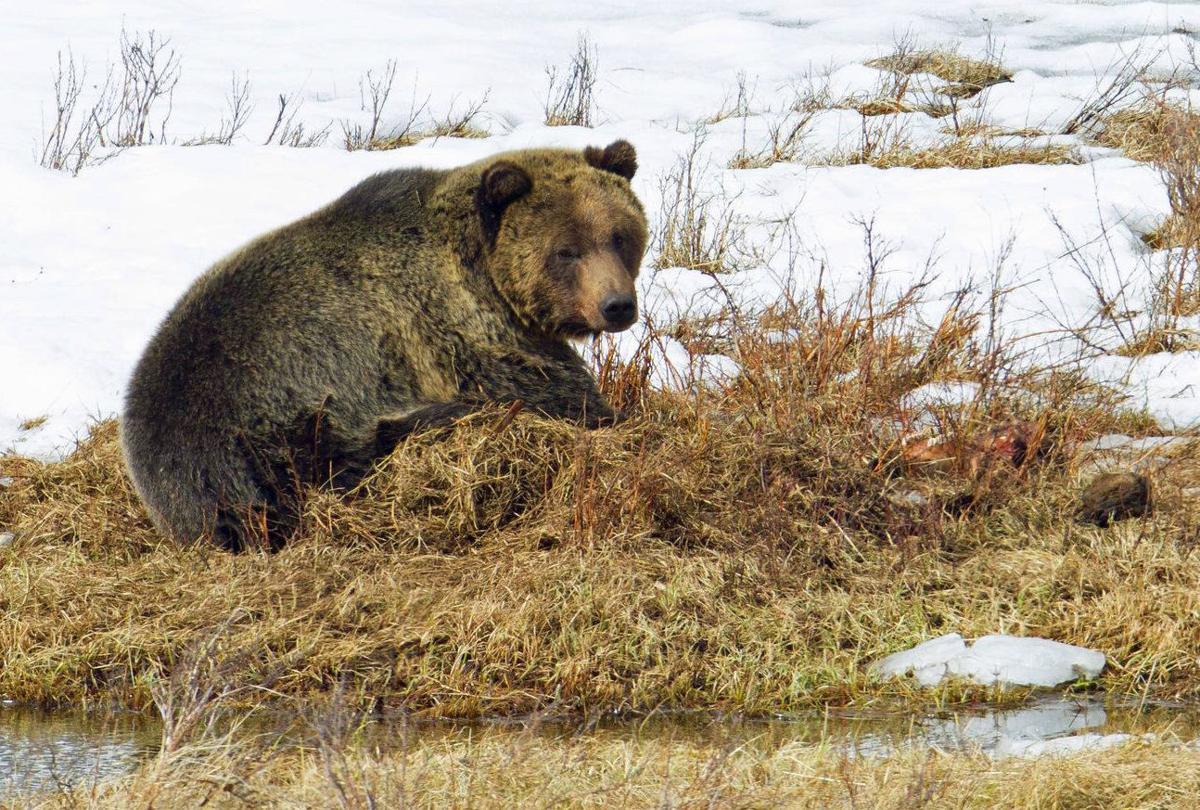 A grizzly bear in Yellowstone National Park guards a carcass at Blacktail Ponds in 2016. Bears can aggressively defend their food, especially in springtime when they are hungry after a long winter of hibernation. 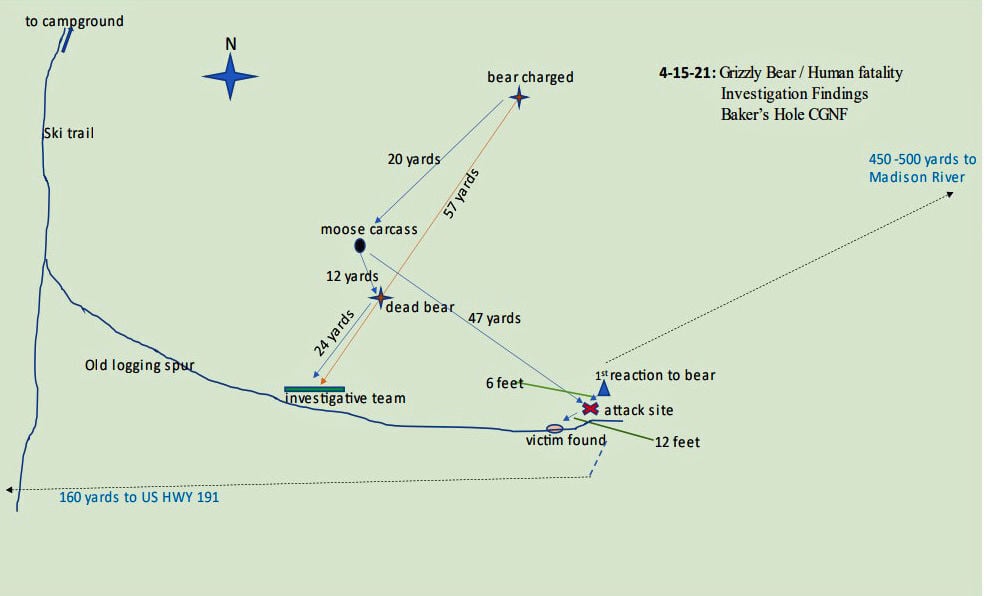 A map of the attack site north of West Yellowstone details the locations of events this spring when Carl Mock was fatally mauled by a grizzly. 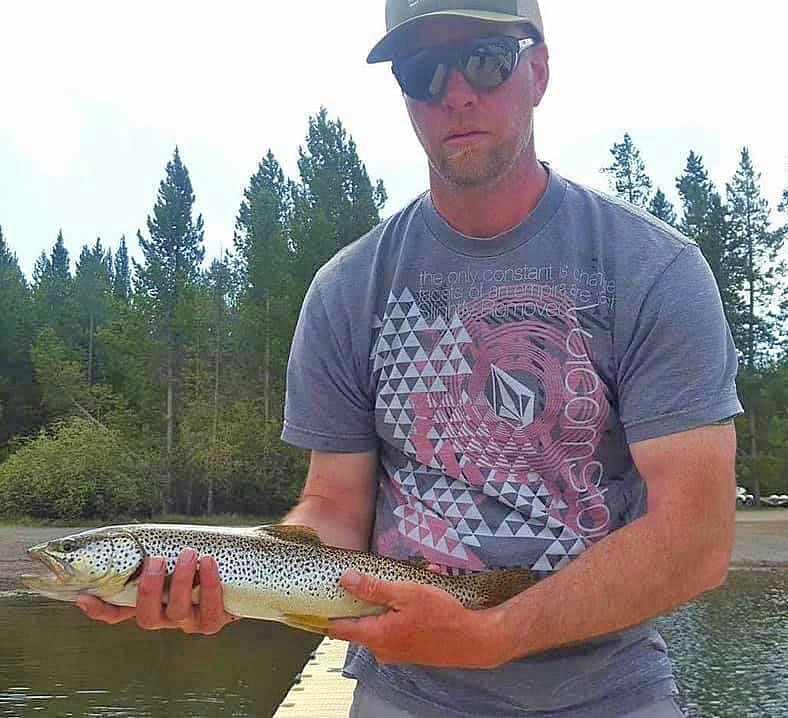 West Yellowstone resident Carl Mock died on April 17 after being mauled by a grizzly bear. Officials later killed the bear when it charged investigators. The adult male bear was defending a moose carcass it had been feeding on.