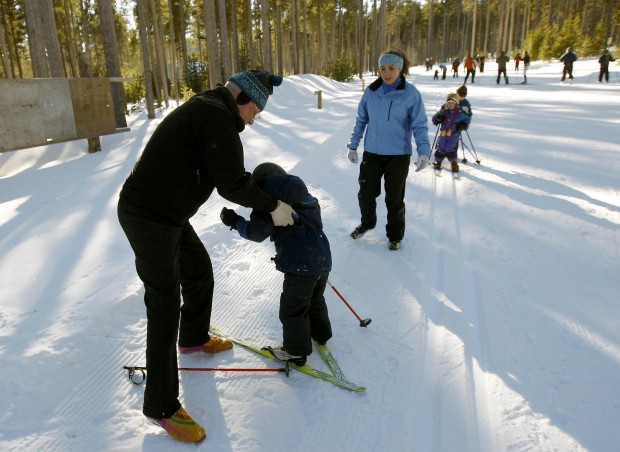 Harry Brubaker helps up a young ski student after he fell on the Casper Nordic Ski Trails on Sunday afternoon. (Dan Cepeda, Star-Tribune) 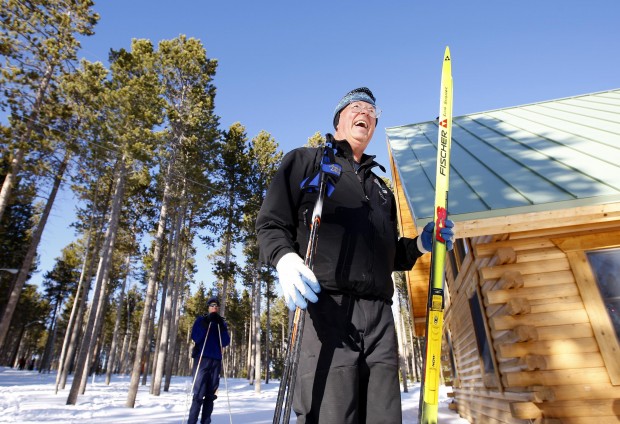 Harry Brubaker laughs while talking to a fellow volunteer during cross country ski lessons at the Casper Mountain Nordic Ski Trails on Sunday afternoon. Brubaker is a long time volunteer for the Magnus Ski League, which gives lessons to kids and adults to help raise funds for the high school ski teams. (Dan Cepeda, Star-Tribune)

Harry Brubaker stood in the middle of everything. He barked directions for teachers and students on the first day of classes.

A record number of people registered for the Mangus Ski League, a nonprofit group giving ski lessons for all ages.

Brubaker, a seasoned Mangus Ski League volunteer, checked on classes and moved back and forth between buildings including the lodge and timing shed he fought to build. As he walked, he planned. Next year he'd build exercise bars by the timing shed and a pagoda over the results board. One day, he'd convert that old log hut to a restroom closer to the start line.

Dreams abound at the Casper Mountain Trails Center, and Brubaker isn't the only dreamer.

It's taken dozens of dedicated volunteers more than 30 years to turn a few narrow miles in the woods into a trail center with more than 20 miles of groomed trail, a lighted loop and lodge, rivaling most centers in the region.

And the volunteers aren't done.

From rags to riches

Casper's first Nordic ski community was a small one. Backcountry skiers wandered through the woods with no formal trail system.

Then-Casper Nordic ski coach Don Jacobson cut the original trails in 1970. He asked the Girl Scouts at Camp Sacajawea and several private landowners if he could use their properties. Volunteers created a three-mile loop just wide enough to use for classic skiing, the traditional form of Nordic skiing

"We had a small sled that we would set classic tracks with that was made in the Kelly Walsh High School shop and we had volunteers with snow machines that would pull it around," Jacobson said.

In the 1980s, people started skate skiing, a kind of cross-country technique in which skiers look a bit like they're ice skating on skis. Skiers needed wider trails, and many wanted longer ones, said Keith Tyler, a Casper attorney and avid Nordic skier.

A core group of skiers started looking elsewhere for trails. They settled on a piece of undeveloped county and city land with a few miles they shared with snowmobilers.

The skiers paid county fees for grooming and maintenance and their trails continued to split from the snowmobile trails.

Tyler helped arrange leases with landowners allowing some trails to snake through their properties.

By the early 1990s the volunteers were planning for even more trails and amenities. Jacobson and others from a local ski club asked for Optional One Cent money for a new groomer, lighted loop and warming hut. All grants were approved, but when it came time to dole out the requested money, the lighted loop turned out to be twice as much as anticipated, Jacobson said.

They had to choose and decided to cut the warming cabin.

"I'd read some articles about night skiing mainly in New England, and I thought it would be neat," Jacobson said.

"There are a lot of people up here who work and don't have the opportunity to ski other than on the weekends."

Then came the big dream: a lodge. Volunteers wanted somewhere people could warm up, socialize and buy something to eat or drink. Brubaker and others had talked about a lodge for decades, about how great it would be to have a place for skiers, snowshoers and other mountain users to call their own.

The volunteers realized the best way to build a lodge was to build it themselves. With a mixture of county and grant money, Brubaker organized dozens of volunteers and built the two-story lodge.

Christened the Casper Mountain Trails Center about a decade ago, recreationists had a place to call home.

"Harry, do you have enough teachers for the adult skate class?" asked Paula Wade-Cropsey, a Mangus Ski League volunteer during registration on Sunday.

Brubaker told her he had two teachers in the skate class, but only one in the classic. In the chaos of registration, he set out to find another coach for a classic-skiing class that had grown larger than anticipated.

Countless volunteers like Brubaker and Wade-Cropsey sent their children through the Mangus Ski League, helping the program that taught their children.

The children's program formed decades ago as part of a national Bill Koch Youth Ski League. Volunteers in the Casper Nordic Club later changed the name to honor the Mangus family who helped form the early trails.

More than 200 people registered for the Mangus ski classes this year: a new record.

Even with ski passes and about $8,000 generated from the lodge, professional grooming is a costly endeavor. The county brings in about $71,000 from leases, camping, food service and tickets during the year on the mountain, but spends about $300,000 on maintenance, hauling camping garbage and grooming, Haigler said.

Brubaker anticipates the pass sales and usage will only increase as he and others expand the system.

The system plateaued for many years with about 17 miles of trails. Then, several years ago, Brubaker started his next big dream: a biathlon park. Biathlons combine skiing and target shooting and require more miles of trails and a shooting stadium.

Locked by private land, the Casper Nordic Club could only expand its trail system by approaching private landowners. Local businessman Mick McMurry owns about a large track of land bordering the ski area to the east and approved volunteers' request to build trails on about 100 acres. The club received a grant, hired the Wyoming Conservation Corps and created another several miles of trails with the possibility for more, Tyler said.

Brubaker and the Casper Biathlon Club are working to find an engineer to design the biathlon shooting range.

He also sees another lodge, this one with dormitory-style sleeping for biathlon athletes. If completed, the biathlon range on Casper Mountain will be the highest-altitude biathlon training facility in the country. He wants Olympians to train here.

Jacobson finally found a way to build the warming hut he wanted decades ago. He and his family paid for the materials, and vocational students in Casper are building it.

Later this month volunteers will build mileposts on the trails to mark locations in case of emergency.

"We work at it every day," Brubaker said.

Harry Brubaker helps up a young ski student after he fell on the Casper Nordic Ski Trails on Sunday afternoon. (Dan Cepeda, Star-Tribune)

Harry Brubaker laughs while talking to a fellow volunteer during cross country ski lessons at the Casper Mountain Nordic Ski Trails on Sunday afternoon. Brubaker is a long time volunteer for the Magnus Ski League, which gives lessons to kids and adults to help raise funds for the high school ski teams. (Dan Cepeda, Star-Tribune)