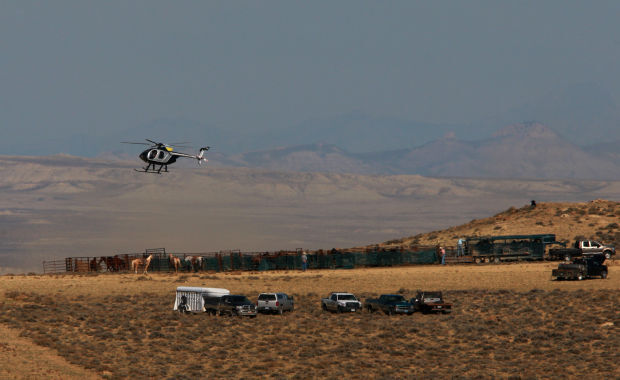 A helicopter hovers near the trap during a wild horse roundup Wednesday, Sept. 24, 2014 in Sweetwater County. Federal contract wranglers plan to round up 4,300 wild horses in southwest Wyoming — permanently removing about 70% of them. 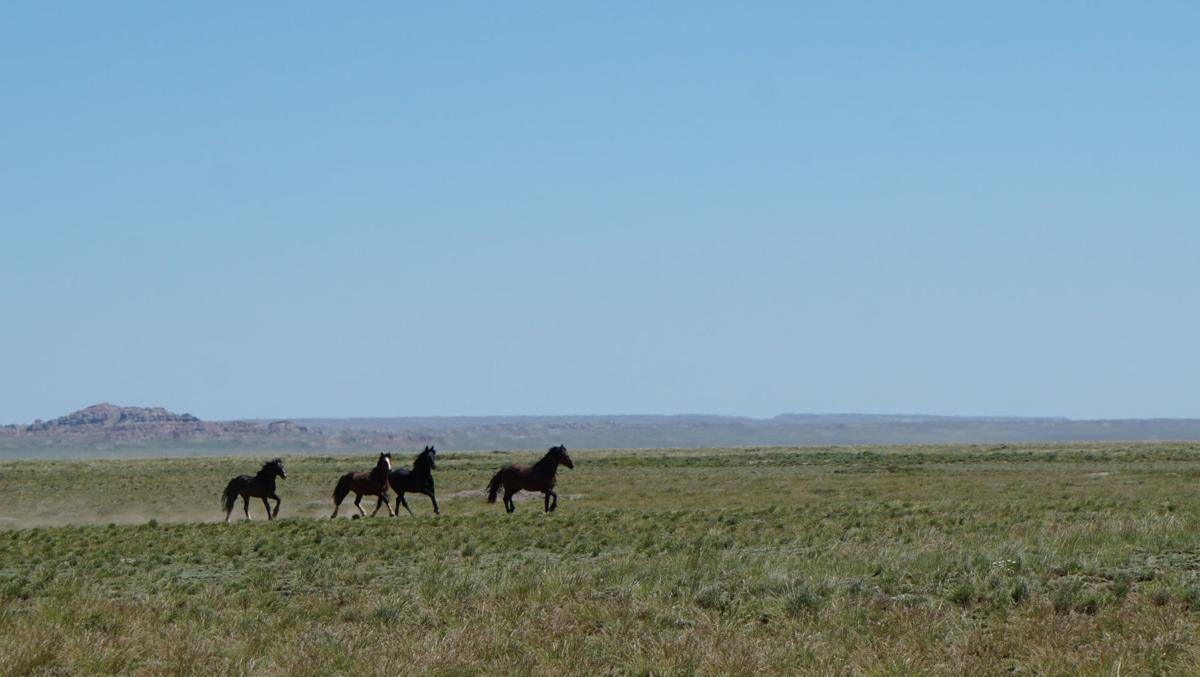 Herds of horses run wild in the Red Desert, mixing with pronghorn and elk.

Federal contract wranglers plan to round up 4,300 wild horses in southwest Wyoming — permanently removing about 70% of them — in an undertaking that culminates years of conflicts among land and wildlife managers, ranchers and horse advocates.

The roundup across 3.4 million acres of “checkerboard” land ownership could last more than a month, said Brad Purdy, a Bureau of Land Management spokesman. The agency will permanently remove — for adoption, training and domestic use — about 3,500 horses. About 800 would be set free again after treating mares in that group with temporary fertility control.

The goal is to maintain rangeland health, reduce trespass onto 899,308 acres of private land — much owned by the Rock Springs Grazing Association — and maintain an “appropriate management level” of between 1,550 and 2,415 wild horses, the BLM says. Today an estimated 5,105 wild horses, some known as mustangs but all technically “feral” horses because of their domestic ancestry, populate the BLM’s five “horse management areas” around Rock Springs.

“The current roundup is to reduce the numbers down to that,” he said.

This month’s roundup will address immediate wild horse management aims as the BLM studies whether to remove all wild horses from some of the troublesome “checkerboard” lands along the Union Pacific Railroad where every other square mile is private.

In Rock Springs, some say the roundup threatens recent economic diversification efforts. Meantime wild horse advocates contest many of the BLM’s justifications for the upcoming roundup and question the balance the agency proposes between horses and ranchers’ grazing stock.

The BLM has set the population levels in the five horse-management areas far below a benchmark known as the “thriving natural ecological balance” threshold, Erik Molvar, executive director of Western Watersheds Project, wrote in an email. The proposed population level is based on allocating 91% of available forage to domestic stock, he wrote.

“This appears to be a serious violation of the federal statute on wild horses, invalidating the legality of this enormous roundup,” Molvar said. Nevertheless, the BLM will forge ahead with its gather this week, agency spokesman Richard Packer said last week.

Grazing association representative Schramm said worries by wildlife advocates illustrate that the BLM roundup is not simply a conflict with stock grazers. Delays in holding roundups have kept the BLM from meeting its population goals and compounded the problem.

“Unfortunately, due to one reason or another, they’ve been unable to maintain horses at that level,” he said. Yet horse numbers can increase by 20% a year, he said.

“The longer they wait, the harder the job,” Schramm said.

As arrangements for the roundup proceed, the BLM is finalizing its long-range plan and the Legislature’s interim agriculture committee is set to consider two wild horse and burro bills Oct. 21. The panel in September worked on a precursor draft measure that would essentially bill the federal government for the grazing costs of trespassing horses.

Lawmakers don’t believe the government would pay up, but the draft legislation would require the Office of State Lands and Investments to calculate the “grazing cost” of trespassing horses and submit that to appropriate U.S. agencies.

The bill also would allow the Wyoming Attorney General to file a writ of mandamus seeking to compel the federal government “to take action to remove excess wild horses as required under federal law from affected nonfederal lands.” Finally, the bill would authorize the governor to negotiate with federal and tribal officials to manage wild horses.

Horses are “starting to outnumber our wildlife,” Arthur Lawson, director of the Shoshone and Arapaho Fish and Game, told the committee, and are causing serious environmental damage. Some of that is occurring on the Wyoming Game and Fish Department 35,000-acre Spence-Moriarity habitat unit near Dubois that’s set aside for elk winter range, said

Pat Hnilicka, a U.S. Fish and Wildlife Service biologist who is an adviser to the Northern Arapaho and Eastern Shoshone tribes. Horses can be viewed “as invasives, as weeds in a sense, because they … spread,” he said.

Committee member Rep. Bill Fortner (R-Gillette) saw an opportunity for another way to deal with wild horses outside adoption.

Approval for such an endeavor would have to come from both Shoshone and Arapaho tribal councils, Lawson said.

Meanwhile, wild horses are a threat to greater sage grouse, a species struggling to persist in the sagebrush sea, the Wyoming Game and Fish Department says. “There’s also a growing body of evidence to even suggest that too many wild horses on the landscape may affect our sage grouse populations,” Angi Bruce, Wyoming Game and Fish Deputy Director for external operations told the committee. “If we continue at a rate of increase [among wild horses of] about 20% a year, we can see as much as 70% decline in the sage grouse population,” she said, referring to a U.S. Geological Survey study in Nevada.

She cautioned that the Nevada study might not be directly applicable to Wyoming. “But if it’s anywhere reflective of what may [happen] in Wyoming, it’s very alarming,” she said.

Ranchers, too, back the BLM, RSGA’s Schramm said of the coming roundup. “We appreciate BLM trying to do it.”

The BLM gather will be “the largest roundup in history,” Suzanne Roy, executive director of the American Wild Horse Campaign, said in a statement. She, also, questioned whether there was balance in the roundup plan, saying the BLM land belongs to all Americans, “not just the livestock operators who receive steep tax subsidies to graze their cattle and sheep here.”

The BLM’s Purdy questioned the assertion that the roundup would be record-setting. “I don’t think that is 100% accurate,” he wrote in an email. The Red Desert gather between 2018 and 2020 collected about the same number of horses as this year’s target, albeit over three years, he said.

In Rock Springs, the BLM’s roundup and pending long-term plan will diminish one of the town’s premiere visitor attractions just as the area is seeking to diversify its economy as the fossil fuel economy falters, a city council member told WyoFile. When he worked the information booth at a high school rodeo, Councilman Tim Savage said, “the main thing these rodeo people wanted to do was see wild horses out on the plains.

“That’s going to change,” he said. “Why are we spending all this money attempting to diversify our economy when we are going to do this?” he asked of the roundups and reductions.

Rock Springs is a way-stop for tourists enroute to Yellowstone and Grand Teton national parks, Savage said. “We try to get them to stay an extra day,” he said, and the Pilot Butte Wild Horse Scenic Loop north of town is an important attraction toward that end.

“There’s a lot of people out there who are concerned,” he said, citing emails, phone calls and letters he’s seen. “I definitely think there’s going to be an impact.”

Wild horse photographer Carol Walker called the BLM roundup “a race to remove as many of these animals from our public lands as possible with no consideration for the very uncertain fate that faces them.” She was referencing reports that some horse adopters, who can receive money from the government to feed adopted horses for a period, ultimately resell them.

Those resale auctions are “frequented by slaughterhouse brokers known as kill buyers,” the New York Times wrote in May.

“Our wild horses belong on our public lands,” Walker said in a statement, “wild and free with their families, not in long-term feedlots or dumped at kill auctions by greedy and heedless adopters.”

The BLM’s own data “show that more than 15 million acres of priority sage grouse habitat fail to meet BLM’s own minimum standards for quality of water, vegetation, and soils, as well as the ability to support wildlife, due to overgrazing,” Tim Whitehouse, the group’s executive director, wrote Haaland on Sept. 20. He called BLM’s approach “the antithesis of sound science.”

“While wild horses certainly impact sage grouse habitat,” his letter reads, “to focus conservation efforts for this habitat on addressing impacts made by thousands of wild horses, while ignoring troves of data on the impacts from millions of cattle, undermines your efforts to create a culture of scientific integrity at [the Department of the Interior].”

Caldera Chronicles: A glimpse into one possible future for Yellowstone

What will happen to Yellowstone once its rhyolite magma system shuts down? To understand the future, geologists look to the past — in this case, to Yellowstone Caldera’s older but smaller sibling, Henry's Fork Caldera!

The bears had not gotten into any conflicts before reports came in the last few days that they entered the dumpsite operated by Park County through an open gate near Chico Hot Springs.

In an “emergency petition,” a coalition of conservation groups has asked U.S. Secretary of the Interior Deb Haaland to reestablish protections for the gray wolf in the northern Rocky Mountains, including Wyoming.

The Bridger-Teton National Forest is seeking comments on whether to issue a one-year permit to allow operation of a winter elk feedground.

So long, summer; final drive to paradise atop Beartooth Pass

The route from Billings travels through Red Lodge and then along the Beartooth Scenic Byway, also known as Highway 212, that climbs to almost 11,000 feet before descending into a corner of northwestern Wyoming.

A helicopter hovers near the trap during a wild horse roundup Wednesday, Sept. 24, 2014 in Sweetwater County. Federal contract wranglers plan to round up 4,300 wild horses in southwest Wyoming — permanently removing about 70% of them.

Herds of horses run wild in the Red Desert, mixing with pronghorn and elk.