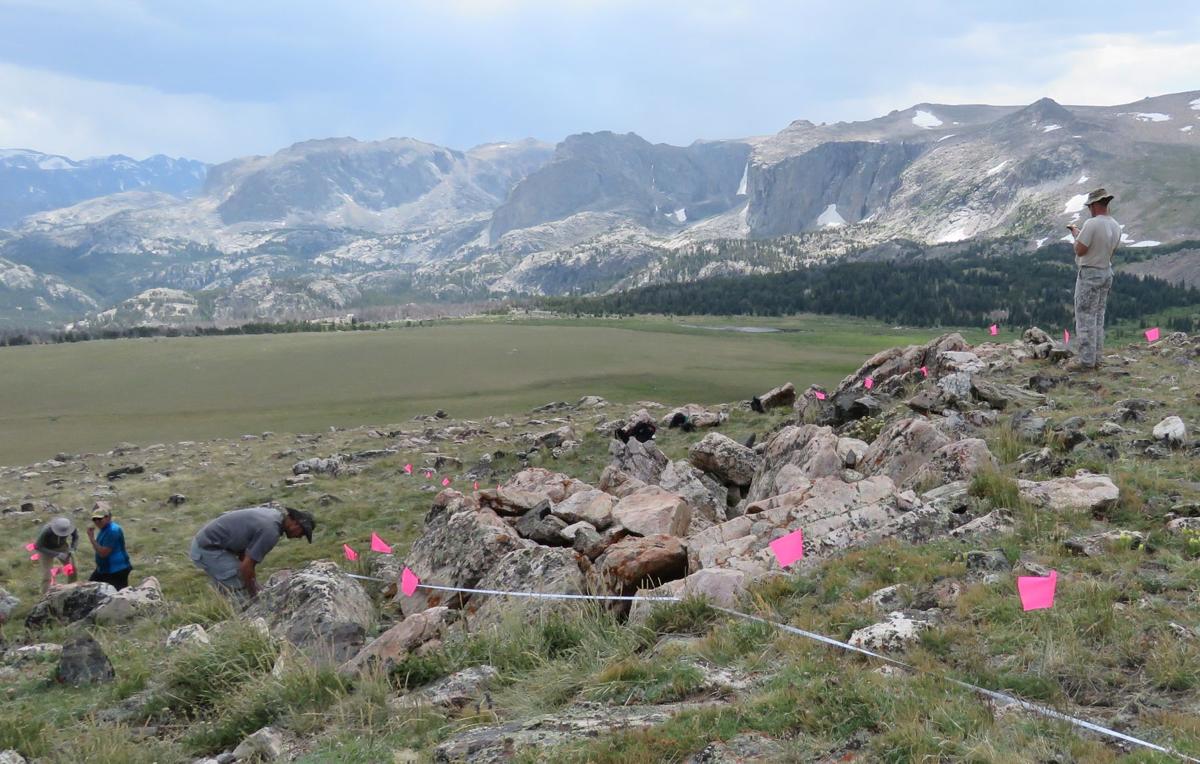 An archaeological field school from Central Wyoming College surveys the top of a recently discovered bison jump in the Wind River Range. It is the highest recorded bison jump in North America. 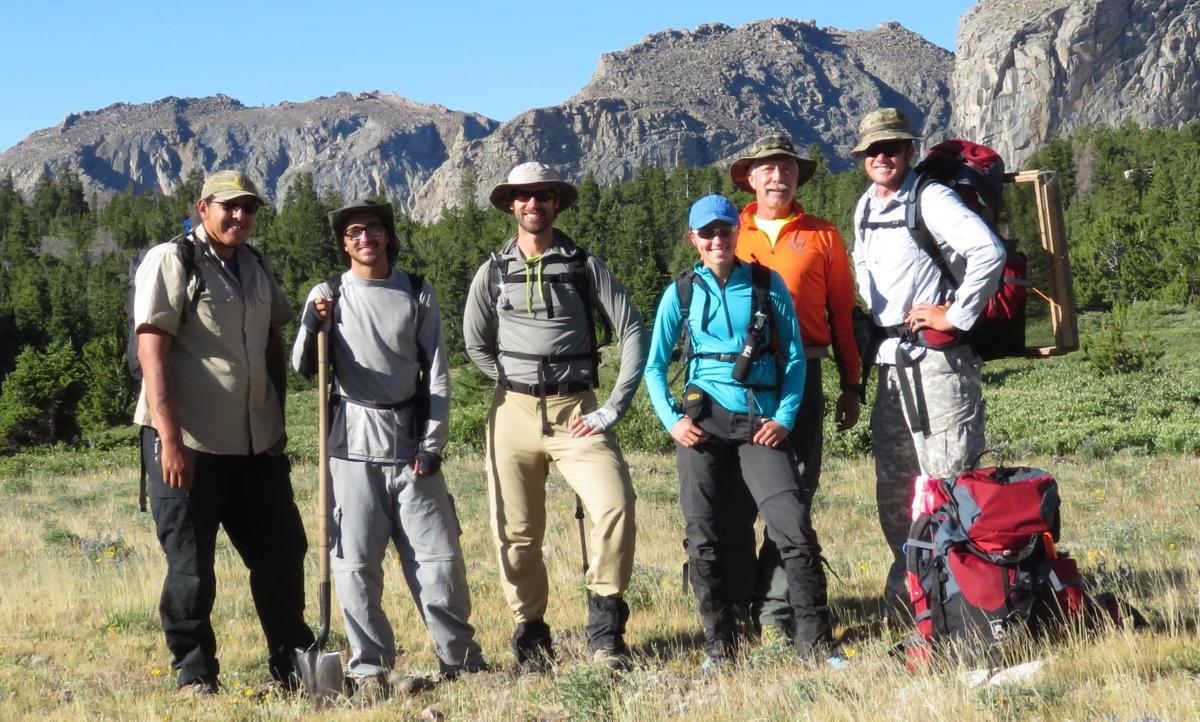 Members of the July 2016 Central Wyoming College archaeological field school pose for a photo in the Wind River Range.

They found the first bit of evidence before they left the parking lot. Flakes of rock and arrowheads littered the ground, easily missed by the casual observer but striking signs of prehistoric life to the trained eye.

Students from Central Wyoming College were buoyed by their finds on the 25-mile trek from a trailhead outside Dubois to the edge of Wyoming’s biggest glaciers. But then, at the top of the state, where harsh winds blow away deep snow and temperatures are often frigid, they discovered something none of them expected: a bison jump.

“The conventional wisdom 30 years ago was that Indians didn’t go into the mountains,” said Todd Guenther, a professor of anthropology and history at CWC who helped uncover the jump. “Now Wyoming researchers have documented that yes, indeed, they did go in the mountains and spent a lot of time there and lived a pretty good life.”

The group discovered the jump as part of CWC’s new Interdisciplinary Climate Change Expedition, which takes students into the Wind River Range to study the mountains’ rapidly shrinking glaciers and their relationship with humans past and present. Guenther will discuss their archaeological findings Thursday at the Buffalo Bill Center of the West in Cody.

Guenther knew the group of students would find signs of prehistoric life. His field school went in armed with a Forest Service archaeology permit planning to survey ancient campsites identified by past groups.

When they reached the toe of the Dinwoody Glacier, they began to find campsites dating back to 11,500 years ago.

The group stumbled on signs of the bison jump — a cliff or precipice where native peoples drove the animals to their deaths — toward the end of their first session in the summer of 2015, said Morgan Robins, a Lander students now studying at the University of Wyoming. They found countless cultural material – arrowheads, stone tool fragments and hunting blinds – and then followed the material down to the Burrow Flats area for continued reconnaissance.

“Another student found a cairn and then found another and another and followed it until Todd and the other student hit a precipice and that’s when it hit Todd that it was something way more than they originally thought,” Robins said. “They went down into the possible butchering area and saw all the flakes and Todd realized it was a bison jump.”

Lichen growth on the cairns – or rock towers – helped prove they were prehistoric.

The line of stacked cairns was about a mile long, and was dotted with hunting blinds where early people hid and pushed the animals forward, Guenther said.

Two shaman structures, which were holes in the ground surrounded by stones, rested near each end of the drive line. People used the pits to pray to spirits for a successful hunt, he said.

At the bottom of the precipice was an area with thousands of stone artifacts.

“It’s where we suspect the animals were butchered and processed,” he said.

Discovery of the bison jump is also helping solidify a theory of Guenther’s: early people lived at high elevations throughout the year. Up until now, most scholars believe early humans spent summers in the mountains and winters below in the plains.

“People would have produced thousands of pounds of dried buffalo meat. Our question is did they winter up there? Would they have wasted weeks and weeks of work and expended thousands of calories carrying all the meat and pine nuts into the valleys below? I think not,” he said. “I think they could have wintered up there in the Burro Flats mountain area.”

To begin to prove his theory, he took a group of students back up to Burro Flats in January when weather was cold and harsh. But instead of being covered in feet of powder and ice as some might expect, large portions of the Burro Flats area was blown open.

Springs flowed ice-free from the ground and nearby trees offered plenty of fuel for fires and shelter.

“If you have food put up from the buffalo jump and pine nuts there’s no reason to not stay right there instead of spending all the time and energy packing down into the valley,” he said. “I can’t prove any of this yet. We’re in the very beginning stages of the project.”

Guenther and his crew of students plan to keep visiting the bison jump each summer to collect more information and teach students how to complete field work.

Students from other disciplines will also continue to attend the field schools. The next step is to start analyzing microbes and soil chemistry in dirt samples from the bison jump. Thin soil and harsh weather means no ancient bison remains survived, but microbes could prove that bison lived and were slaughtered in the area, said Jacki Klancher, associate professor of environmental health at CWC.

The trips into the glaciers were her brainchild in 2013, stemming from an environmental sciences class.

Students from CWC are now using the expeditions into the Wind River Range to explore hydrology, biology and geomorphology in addition to archaeology and anthropology.

“That’s where the student’s heads are, in the clouds, that’s where they want to be,” Klancher said. “If we can take them there and challenge them physically and academically and contribute positively to the scientific community it’s the dream.”

Todd Guenther, an archeology professor at Central Wyoming College, will present information about the highest recorded bison jump in the North America, discovered by his field school in the Wind River Range. The free lecture is at 12:15 p.m. Thursday in the Coe Auditorium at the Buffalo Bill Center of the West in Cody.

WIND RIVER RESERVATION — After more than 40 years of work and perseverance, Dick Baldes could hardly believe the day had finally come.

An archaeological field school from Central Wyoming College surveys the top of a recently discovered bison jump in the Wind River Range. It is the highest recorded bison jump in North America.

Members of the July 2016 Central Wyoming College archaeological field school pose for a photo in the Wind River Range.