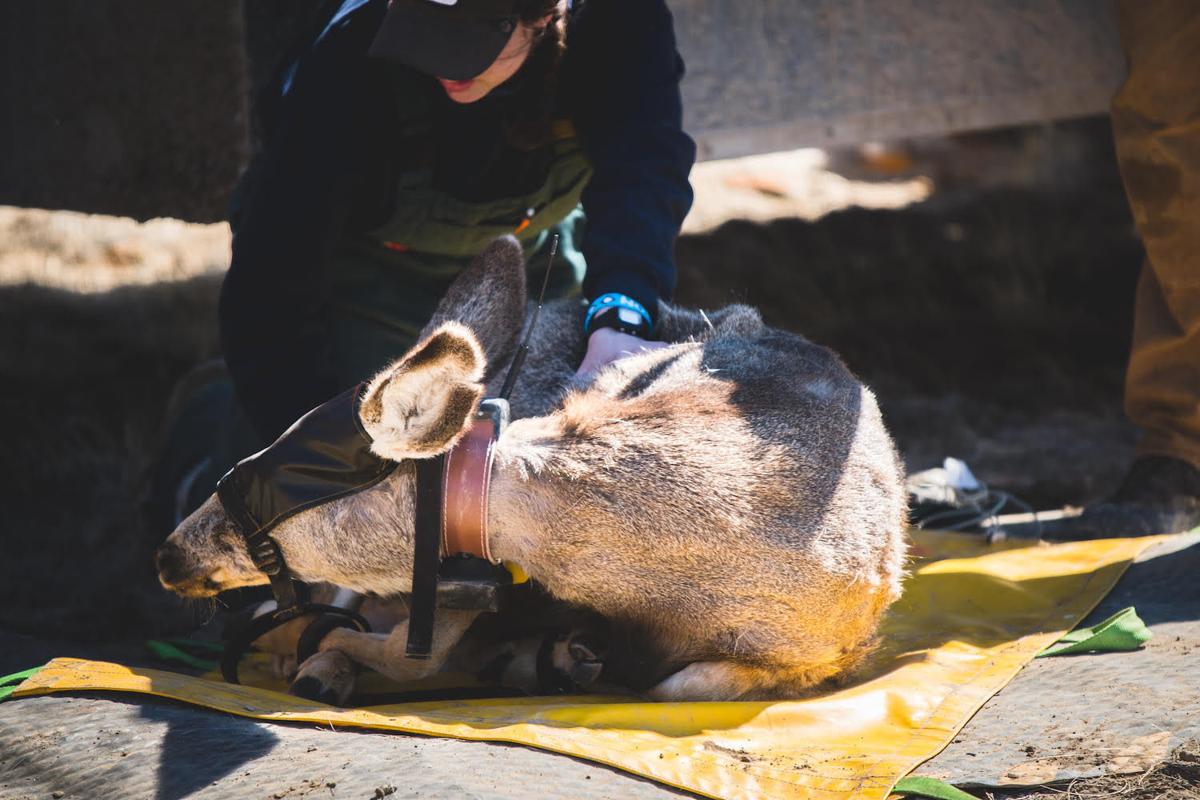 University of Wyoming graduate student Rhiannon Jakopak works with mule deer doe 255, the deer with the longest-distance migration route ever recorded, in March in the Red Desert. Biologists have asked for delays on leasing land parcels that overlap the species' migration corridor. 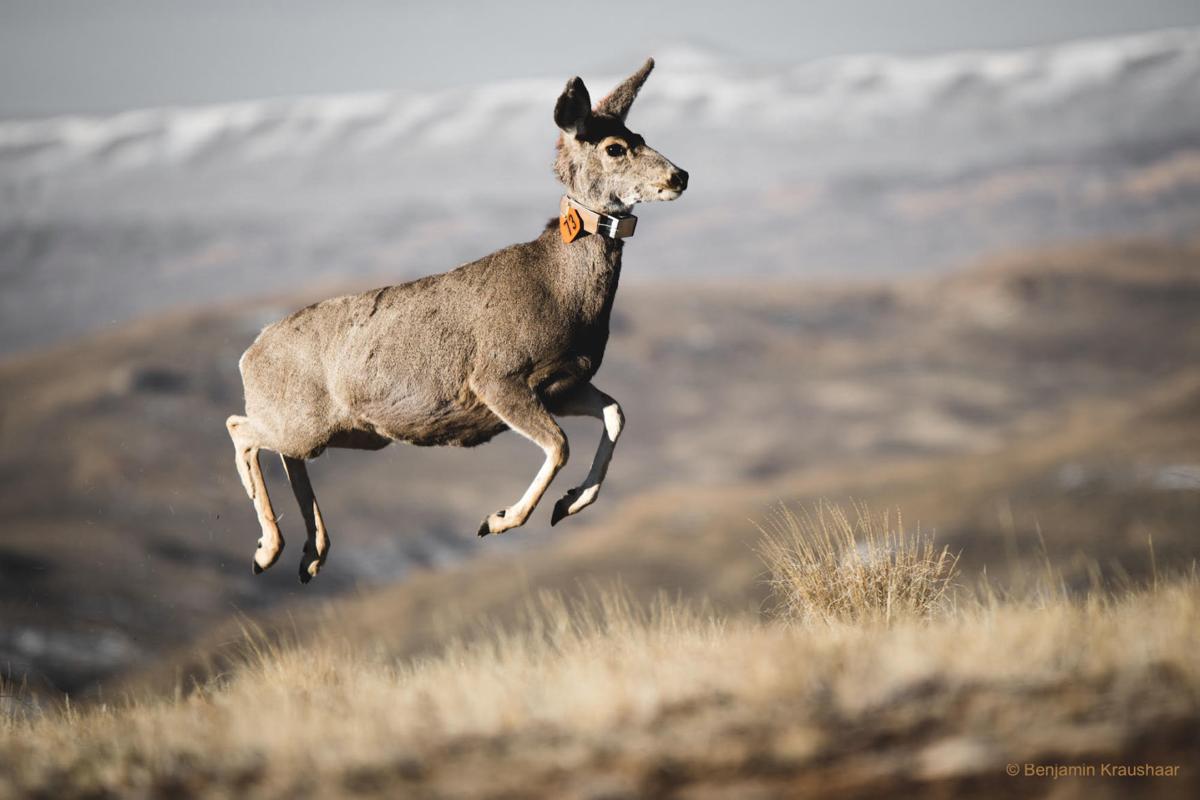 A mule deer doe in the Sublette herd jumps as she is released in the Red Desert while wearing a GPS tracking collar. Mule deer doe number 255 (not shown here) recently made a 242-mile migration across the Tetons to Idaho, breaking the previous 150-mile record documented on the Red Desert to Hoback Corridor. 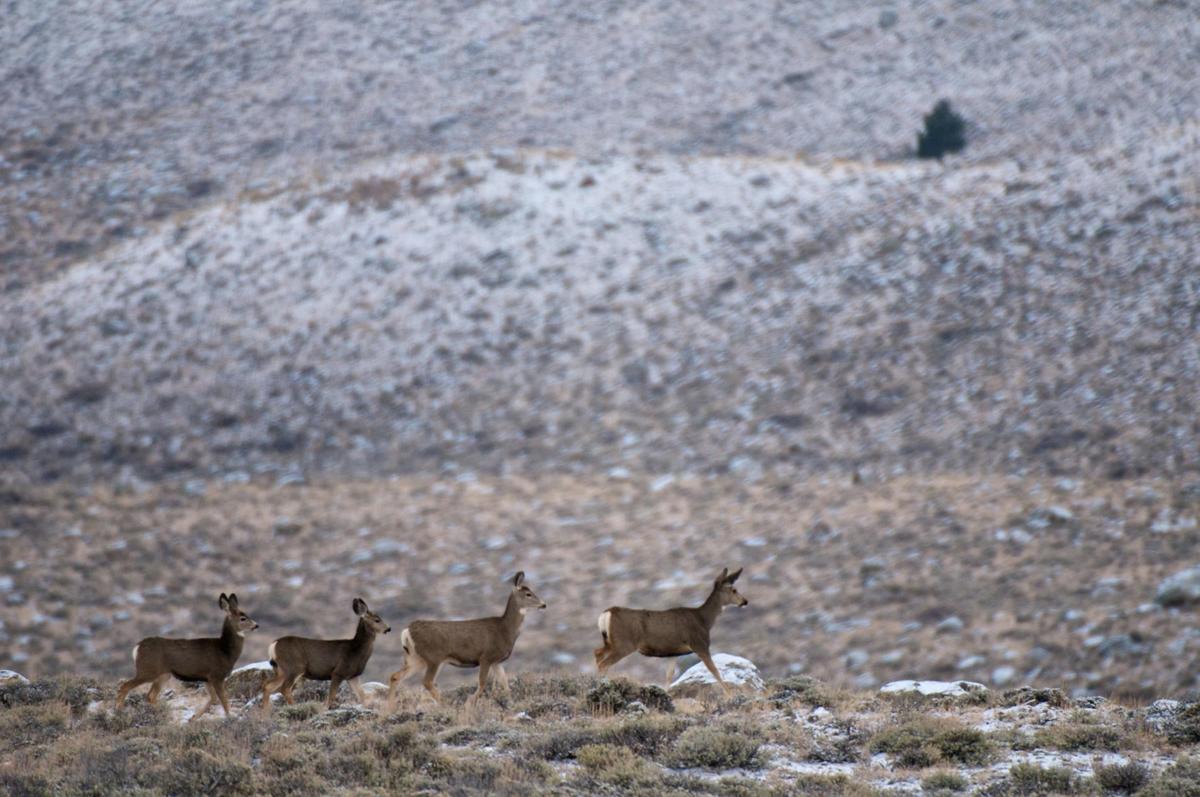 A mule deer doe in Wyoming recently made a 242-mile migration across the Tetons to Idaho, breaking the previous 150-mile record by the Sublette Herd, shown here on the Red Desert to Hoback Migration Corridor. 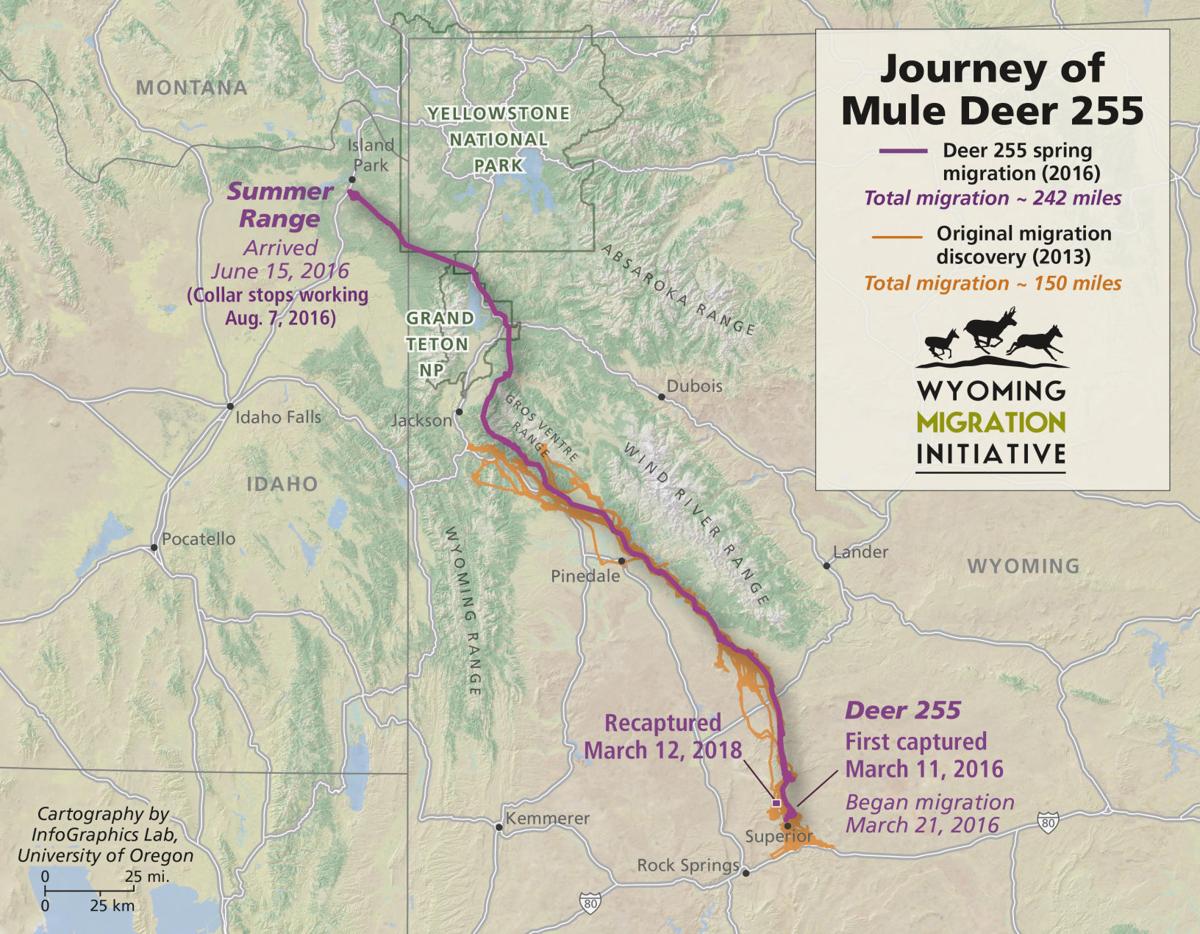 This map showing the migration of mule deer 255 was made as part of "Wild Migrations: Atlas of Wyoming’s Ungulates," which is a project of the University of Wyoming and University of Oregon and will be published in October.

The longest recorded migratory mule deer herd in the world travels about a 150 miles from the Red Desert in southwest Wyoming to a place called the Hoback.

Discovered in 2012, the route garnered national attention and inspired countless discussions about its protection. It was an example of something infinitely impressive: the longest mule deer migration trekking unnoticed in Wyoming’s backyard.

In 2016, researchers with the University of Wyoming placed 40 collars on deer in the Red Desert and then watched as the animals wandered their way through greener grass.

Most of them stopped in the northwest corner of the state until cooler weather and snow would push them back down to the desert.

Except one deer. Doe number 255 – as named by her GPS — didn’t stop in the gentle valleys of the Hoback. She continued north, climbing up and over the Gros Ventre Range, dropping down into Jackson Hole, walking around Jackson Lake and up and over the foothills of the Tetons, sliding west into Idaho and ultimately landing in the relatively lush region of Island Park, Idaho.

Biologists watched in awe at her progress, wondering where she was headed and if she would come back.

Then her collar died.

She had traveled almost 250 miles, said Matt Kauffman, leader of the Wyoming Migration Initiative and the USGS Cooperative Fish and Wildlife Unit at the University of Wyoming.

“It’s really pretty impressive. For a lot of animal movements, we look at them on the map and think about the elevations, but this would be an all-day trip in a car,” Kauffman said. “In a car you’re moving across paved roads with a combustion engine.”

But without more data, only questions remained: Would she return to her winter range in the Red Desert? Did she connect with another herd in Idaho — a rarity, but a possible option? Was it an isolated incident, or is there a group of deer that follows that same path, blowing the previous longest-migratory herd out of the record books?

If she did return to Wyoming, if she and others followed that same route each year, it would further emphasize not only a mule deer’s incredible fidelity to its annual migration pathway, but also just how many different ways the West’s big game herds move to make a living.

Even before Wyoming biologist Hall Sawyer discovered the mule deer migration from the Red Desert to the Hoback, wildlife experts knew these deer moved.

“We suspected years and years ago in the stone age of wildlife management, before we had GPS and things. We knew they crossed Highway 28 and went somewhere,” said Mark Zornes, wildlife supervisor for the Wyoming Game and Fish Department’s Green River region and a collaborator on the project. “But we had no idea where they went.”

The deer may have stopped in the southern Wind River Range, or perhaps traveled a little farther, Zornes said, but from there they could only guess.

What biologists discovered through more than a hundred GPS collars on the Red Desert to Hoback deer, was that 500 to 1,000 deer traveled into the western side of the Winds where they merged with another 4,000 deer. That group then wandered through the Green River Basin into the Hoback.

All or portions of the 150-mile route supports life for thousands of mule deer. Without those various pathways, the herds would be substantially smaller, Kauffman said. Migration routes allow deer – as well as other big game such as elk, pronghorn and bighorn sheep – to take advantage of spring and summer forage. It’s a frequent enough event it’s been coined the green wave.

To spread out the pressure on any one area, Kauffman said, ultimately boosting, and maintaining, large herd sizes.

“There’s all these different herds around the greater Yellowstone area that have figured out how to make a living on these big landscapes, which always entails wintering somewhere low and summering someplace high in the mountains where it’s really productive. And that’s their general recipe,” Kauffman said.

“It’s like a stock portfolio for the herd. You have lots of animals that go places and they can experience different climates. Some will experience a harsh winter, some a mild winter, so from a herd prospective, having a diversity of migratory strategies are like having funds in many different stocks.”

For almost two years, Kauffman and other biologists wondered where deer 255 ended up.

Not only did her collar stop pinging off of a satellite, it also wouldn’t send signals to a plane flying over with an antennae. She was gone.

Her 242-mile path would go down in the record books as a potential anomaly, something they couldn’t explain or use to draw conclusions because of lack of data.

In mid-March, two years after her first capture, crews with Game and Fish and the Migration Initiative began yet another capture of does in the Red Desert.

A “mugger,” as they’re called, hung out the window of a helicopter and shot nets at targeted deer. Biologists then tested the deer for body fat and pregnancy, secured a GPS collar around their necks and released them back on their range.

The information, now gathered from about 100 deer, gives experts a look at changing body types and conditions as well as pregnancy rates and their migration patterns.

Kauffman asked the pilot to try and capture any deer with brown collars, ones they’d used in the past.

On March 12, a graduate student on the project realized the serial number on an animal they caught with an old brown collar was deer 255.

She had come back.

“We now know it wasn’t a fluke, she wasn’t dispersing into a different herd,” Kauffman said. “It was her migration.”

And if it is an established route, that means more travel the same one.

The news comes at the same time as a recent paper published in the journal Ecosphere used years of data to outline the impact of residential and energy development on mule deer.

But they will travel through quicker, not stopping at places long enough to become properly replenished. As the paper’s abstract says: “This work adds to a growing number of studies indicating that development can disrupt migratory behavior.”

Any new development put in the wrong place can disrupt the journeys of deer like 255 but also the tens of thousands of animals that trace at least part of her steps.

Agencies are working toward more protections for the routes. Interior Secretary Ryan Zinke released a migration order earlier this year that many at least say brings attention to the issue.

The Wyoming Legislature passed a bill recently allowing the state to sell wildlife license plates with the proceeds going to prevent highway deaths with safeguards like over and underpasses and fencing.

But before the underpasses, fences and maps, wildlife and land managers have to know where the deer travel.

With each new discovery, whether it’s the Red Desert to Hoback or the saga of deer 255, researchers are one step closer to protecting herds that draw hunters and wildlife viewers from around the world.

Deer 255 has a new collar now. It pings her location every two hours. On Thursday, she was making her way north through the Red Desert, between Steamboat Mountain and Highway 28.

While researchers like Kauffman, Zornes and Sawyer were amazed by the doe’s journey – and the likelihood that others travel the same way with her – it also reminds them of what routes have likely been lost already to development. It also tells them what should be done in the future.

A narrow corridor of land, beaten by the Sublette mule deer herd as it travels from the Red Desert to Hoback and back again, may be developed …

Along the Sweetwater and Sublette County line, just east of Farson, a number of parcels of federal land are up for lease to the oil and gas industry.

Poll: Most Wyomingites believe energy development and conservation can coexist

University of Wyoming graduate student Rhiannon Jakopak works with mule deer doe 255, the deer with the longest-distance migration route ever recorded, in March in the Red Desert. Biologists have asked for delays on leasing land parcels that overlap the species' migration corridor.

A mule deer doe in the Sublette herd jumps as she is released in the Red Desert while wearing a GPS tracking collar. Mule deer doe number 255 (not shown here) recently made a 242-mile migration across the Tetons to Idaho, breaking the previous 150-mile record documented on the Red Desert to Hoback Corridor.

A mule deer doe in Wyoming recently made a 242-mile migration across the Tetons to Idaho, breaking the previous 150-mile record by the Sublette Herd, shown here on the Red Desert to Hoback Migration Corridor.

This map showing the migration of mule deer 255 was made as part of "Wild Migrations: Atlas of Wyoming’s Ungulates," which is a project of the University of Wyoming and University of Oregon and will be published in October.