Doug Smith arrived in Yellowstone National Park in 1994 with orders to reintroduce wolves. The same year, a cow elk numbered 1125, was born.

On Jan. 30, 25 years after wolves repopulated northwest Wyoming, grizzly bears came back from the brink and mountain lions re-established themselves, elk 1125 finally died, giving into the weather, a predator or perhaps something else entirely.

Smith, 59, tried finding her collar on Tuesday, hoping to definitively say what killed the oldest elk collared in Yellowstone National Park. But signals from her collar were too difficult to trace. After hours of skiing through the backcountry, the senior wildlife biologist and and a team turned around, knowing she will likely be buried by snow soon and then scavenged until she’s no more than bones.

People think of Smith as the wolf guy. He’s spent years at public meetings and in hundreds of interviews talking about wolves. But over the years, he’s felt more connected to that elk.

“We all need touchstones, and this gal out there. Every step of the way was with me in Yellowstone,” he said. “Her life was unsung and mine has been this exciting slog through the wolf world and government bureaucracy, and I wondered how she did it.”

The Star-Tribune caught up with Smith to talk to him about the past 25 years, what he has seen, what elk 1125 likely saw, and what is next for Yellowstone’s elk and wolves.

CST: What was the environment like when you arrived in Wyoming? Were you prepared for the divisiveness?

Smith: I was. Having been interested in wolves most of my life, I had 16 years prior wolf experience, and controversy and wolves go hand in hand. They’re a polarizing topic, sadly, agonizingly, and they’re emotional.

But every time I sat down with a rancher or hunter I always liked them. That was the attitude I came in. I get this, it is the right thing to do, it’s backed by policy and law, but it doesn’t have to be that bad. You can have wolves and hunting and ranching altogether. I was optimistic.

What was the practicality of your job?

To get the job done. The most important thing to me was to establish a monitoring program that would lead to the best science we could do. It was constant media attention and lots of public meetings with angry people, with happy people. I met with both. I’m a government employee, I’m a public servant, so when someone calls and wants to meet, you have to go. It was baptism by fire. I was going into a lot of lion’s dens where I was the red meat thrown on the floor.

So this cow elk born the year you arrived, what was the outlook for her?

The world was pretty bad for elk the year 1125 was born. It was an overpopulation of elk based on density dependence. What that means is you’re at the maximum population an environment can support, so in general, there’s not enough food to go around.

And now with wolves, cougars and bears fully restored we rarely see die offs at all. There’s always some winter kill out there, but it’s no longer ‘how many elk will die this winter?’

So wolves, bears and lions kept the elk population in check?

There’s a niche to be exploited and the elk, deer, bison, moose evolved with that predation so they have super high productivity because they know they will get eaten, but the predators eat enough to keep them off carrying capacity. In general, you have a healthy population producing at its maximum every year. Why? Because there’s plenty of food.

They’re expecting to get eaten. Nature is built in the big picture, how do populations exist? It’s in predation. If predators wipe them all out, they’re gone, too. It’s an evolutionary arms race, if one side wins too much, the other side goes out. If the predator gets better, they start winning and the prey are selected to get better and are adapted to counteract how the predator gets better. You have this ying and yang and it works out how you get both.

You’ve said before that wolves aren’t efficient killers, but pictures, movies and anecdotes talk about them as killing machines, can you explain that?

The canid body plan, a coyote, wolf, fox, has been around 40 million years. It’s highly successful but in the incredible length of time it’s been around means it’s incredibly general. It developed early and never went away.

The movie stuff shows the successes. They never show the failures. Wolves kind of get out there and try it out and do the best they can.

Their body form is able to go long distances at low energetic costs. They’re good at traveling and they need to be because they’re such crummy hunters. Wolves have low success rates so they test a lot of prey. They can go for hours without taking a break. Wolves in general eat a couple times a week and they’re hunting all the time.

How successful are wolves?

Our best estimate on elk they are successful between 5 and 15 percent of the time. Our estimates on bison are less than 5 percent.

How do you come up with those numbers?

Wolves are always hunting but motivation changes based on hunger level. If they’re coming off a fresh kill where they’ve eaten and they’re full, and they see an elk with a broken leg they will kill it and eat it. Because when you have such terrible success rates you will kill when you can. But if they come off a fresh kill and the next elk they see looks pretty good they won’t even bother chasing it.

Wolves hate standing prey even with deer, because it’s dangerous. They charge you and kick you and have antlers to gore you. Many times I’ve seen cow elk charge wolves and the wolves run like hell away from the elk. If the whole herd stands there and the wolves are moderately hungry, the wolves will think ‘forget it’. If they are really hungry, they will put chase to the elk group and will test them by watching them flee.

We categorize different states of hunting. Chase, target, attack. One of them is look. They stop and look at them to assess.

How did wolves progress over those 25 years? Was it as expected?

It went better than we expected. The goal was to get wolves from Canada for three to five years, and we did two. The third year was from northwest Montana. When we released them we thought many would travel widely and some would get shot and some would get hit by cars. By and large that didn’t happen.

If you give wolves half a chance, that’s all they need.

What did you think when you heard 1125 was born the year you arrived?

I thought it was kind of cool we have been together every step of the way. In 2011 (the year she was collared and aged), I had already been here 16 years, this is a decent amount of time, she has been here that long too.

Because of wolf introduction, everyone has pegged me as loving wolves and hating elk.

But wolves live five or six years, some might live eight or 10, but here is this gal, 16 years old and still going and has been there every day I’ve been there. Her wintering area was five minutes from my office. She was nearby.

What kind of shape were the elk in then and now?

I participated in the aerial counts of elk in the winter. You would fly over them (in the late ‘90s) and I could see with the naked eye elk that had problems, elk with legs dangling they were broken or elk limping or elk that couldn’t fully extend their hind leg, locked in a crooked position. We don’t see that anymore.

It’s hard because it’s built on death, but it’s much better for both. Elk did not get wiped out. Hunting is still strong in Montana, Wyoming and Idaho. There are more predators in Yellowstone, there is a lower elk population, but they didn’t get wiped out and they are still very productive.

Is this as balanced an ecosystem as Yellowstone can have in the age of humans?

I will go so far as to say Yellowstone has never been better. In 1872 you had the fur trade, market hunting, you had predator control, you had bison eradication, fire suppression. There was a lot of stuff going on then. The policy of Yellowstone in 1872 was to kill all the predators and the last wolf was killed in 1926 and last cougar in the ‘30s and coyotes we don’t keep track of but were reduced to nothing, bears were saved but still much reduced.

Because we killed off all the predators, in 1923 the Park Service started killing elk and they killed over 70,000 elk all the way to 1968. Some were killed by Montana by hunters and some were shipped to 38 states and six countries or were killed by rangers in the park all to save the environment from elk. And we stopped that in 1968, and the states hated that, and so they started harvesting cow elk at the boundary, mainly in Montana. If there’s any irony to my existence in Yellowstone, when I showed up in 1994, we were still having people criticize us for having too many elk.

25 years later: Politics, myths and the reintroduction of wolves to Yellowstone

In the same year that Yellowstone National Park marks the 25th anniversary of gray wolf reintroduction, Colorado voters will have the power to pass or reject an initiative that would require its state wildlife division to reintroduce wolves by 2023.

What more do you want to learn about the two groups, wolves and elk?

The best research is long term. You will never predict the future, and you will always be surprised. These ecosystems are constantly unfolding and constantly changing and evolving and always surprise us and given how hard it is to preserve the West, we need to know these things. And Yellowstone preserves a baseline.

How many calves do you think elk 1125 had? Will her offspring likely live in Yellowstone forever?

In general from about three to four, to about 12 to 14 an elk has a calf every year. And at about 13 or 14, they start having a calf every other year. Our rough estimate will be about 10 calves during those prime age years and the next 10, five or six more. So based on what we know she probably produced 15 to 16 calves. Three, four or five of those probably lived. If they make it to two, these prime age elk aren’t going to get killed by wolves. You will make it to 12 and 14 and then risk to cougars and wolves goes way up. I would guess there are a handful of her babies out there doing their thing.

Park officials believe there are 94 wolves in Yellowstone this year, as compared to 80 last year. 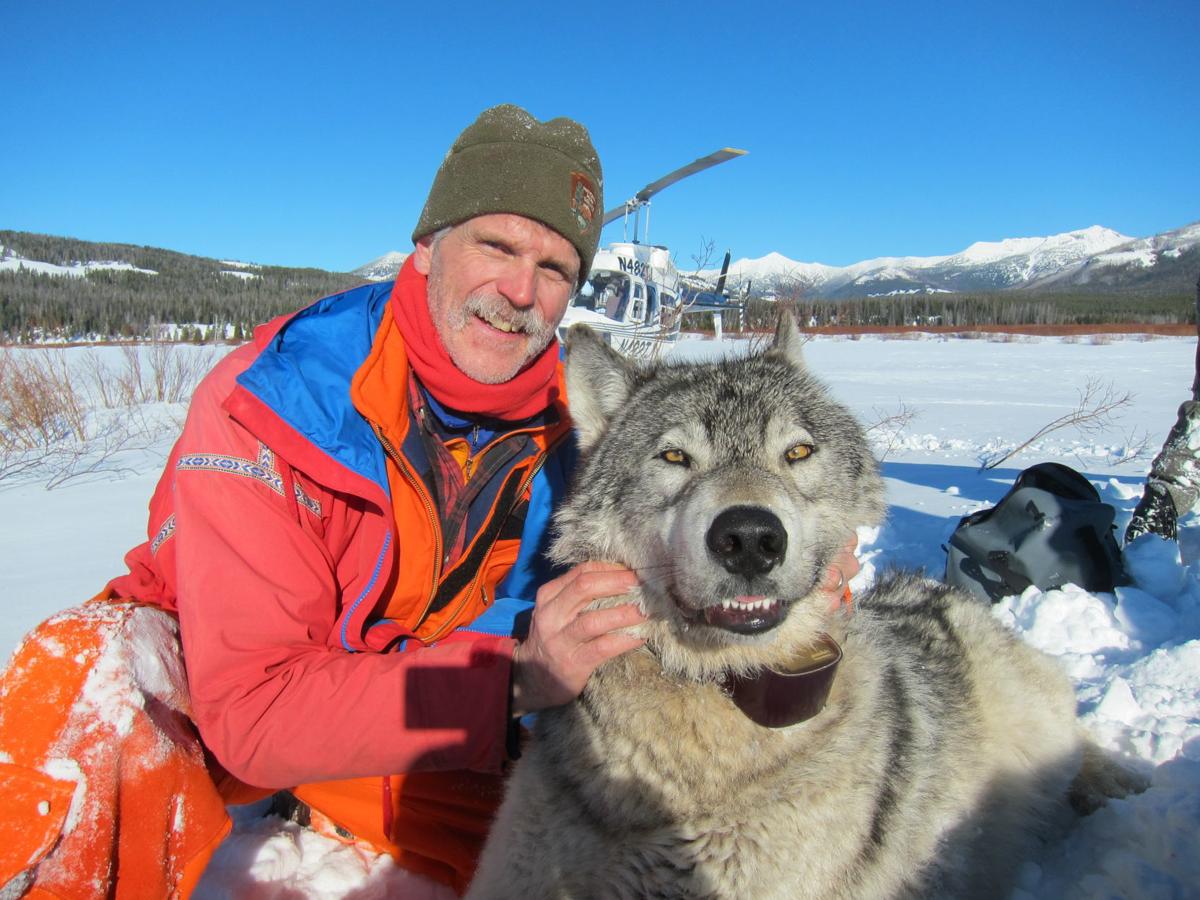 Yellowstone National Park senior wildlife biologist is picture with a wolf. Smith arrived in the park in 1994 to reintroduce wolves. 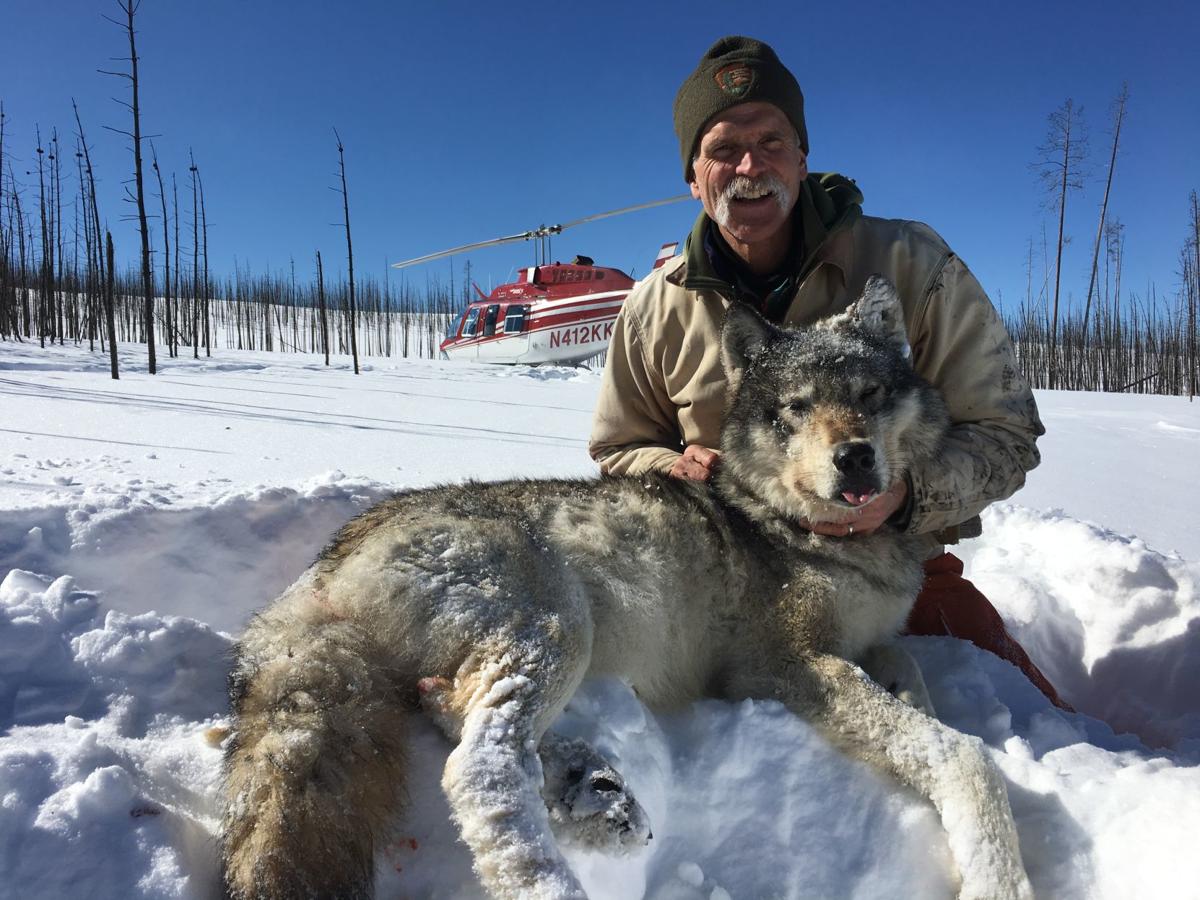 Before coming to Yellowstone National Park, Doug Smith had 16 years prior experience with wolves. 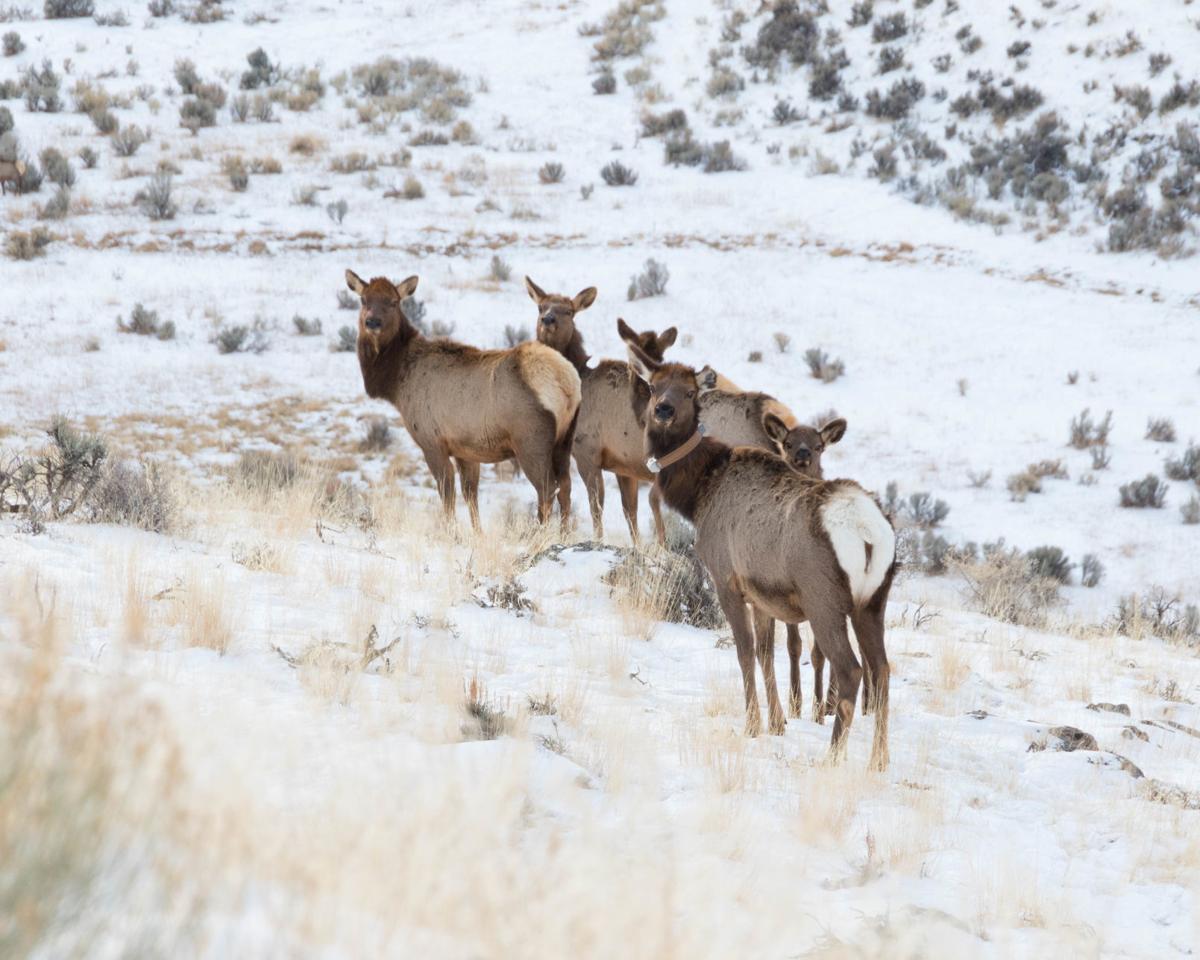 Though 26 years ago he was tasked with wolf reintroduction to Yellowstone, over the years Doug Smith felt more connect to a female collared elk, 1125, that was born the year he arrived in the park.