In 149 years, Yellowstone National Park has moved from horse-based transportation for visitors to the first testing of an electric shuttle capable of operating without a driver.

On Wednesday the park launched a $360,000 public experiment into what could be the next generation of park transportation when it unveiled two eight-passenger, window-walled cubes nicknamed TEDDY (The Electric Driverless Demonstration at Yellowstone).

“This type of technology can really help us achieve some of our major sustainability goals that we’ve set here in the park,” said Cam Sholly, park superintendent, as the vehicles were unveiled to the media on Tuesday.

Such technology could be tested at any location, but Canyon Village provides a remote setting at an elevation of 7,900 feet where snow can fall any month of the year. Through Aug. 31, the vehicles will navigate the maze of Canyon Village’s parking lot to provide riders a free and quick lift to nearby lodging and campsites to demonstrate the shuttles’ capability at avoiding errant pedestrians, distracted drivers and unpredictable wildlife.

The vehicles are cute, resembling a life-sized child’s toy. On the sides they are artfully decorated — one with the photo of a regal bull bison and the other with a wide-angle view of the Grand Canyon of the Yellowstone. Springing over the tire on one is an outline of a fox.

“They are distinctly different,” said Charlie Gould, a transportation fellow with Montana State University’s Western Transportation Institute. “The attraction to the public is strong.”

Named Olli by their manufacturer — Knoxville, Tennessee-based Local Motors — the vehicles were 3-D printed. Inside each cube is $300,000 worth of high-end technology installed by Beep Inc. Twelve cameras mounted on each shuttle provide a 360-degree view of surroundings. Three 12-volt batteries and one large 400-volt lithium battery power operations for 40 miles, about 1.5 hours, before recharging is needed.

Thanks to GPS, laser measurements using LiDAR and radio signals from an antenna, the vehicles have accuracy up to 1 centimeter, Gould explained. Known as Real-Time Kinematic positioning, a fixed antenna interacts with the shuttle and satellite positioning information to achieve accuracy.

The nearly 7-foot wide, 13-foot long vehicles can carry 1,350 pounds. Similar vehicles have been deployed in Maryland, Italy and Berlin.

During their short ride, visitors can view a five-minute video that explains the testing program while also touching on Yellowstone’s history and the importance of giving wildlife room to roam.

“Obviously we’re not moving a lot of people,” Sholly said, but the shuttles are testing the technology to see if it works.

Future tests could expand the routes depending on what is learned this year, he added.

“We’re just trying to understand the technology we have today,” said Joshua Cregger of Volpe, providing technical assistance to the National Park Service after releasing a 2018 study on automated transit.

Yellowstone may be the first national park, but Wright Brothers National Memorial had the honors of launching the first Park Service study of the Connected Autonomous Shuttle Supporting Innovation (CASSI) on April 20.

Still, Yellowstone will likely provide a more difficult and unusual testing ground for the vehicles. When the crews from Florida-based Beep Inc. arrived eight weeks ago, they encountered three-foot deep roadside snowbanks and winter-like cold.

Deployment of automated electric vehicles in Yellowstone and other national parks is uncertain at this point. Right now, the partners are simply seeking more information, which will include passenger surveys.

In the same vein, the park has initiated a separate study analyzing the best ways to enjoyably move visitors through the park while also protecting the park’s unique and fragile environment. Through 2022, the transit feasibility study will focus on four of Yellowstone’s most congested areas: Old Faithful, the Upper Geyser Basin, Norris Basin and Canyon Village. The study will inform whether piloting a local transit service in Yellowstone is feasible, the Park Service said.

A 2018 survey of park visitors revealed that 80% to 90% of tourists in Yellowstone approve of shuttle services as long as they aren’t the ones riding them, Sholly said. Shuttles could be combined with other traffic-reducing measures, such as timed entry, to address a continually increasing number of visitors. During peak summer visitation the park’s main roads and parking areas are over capacity by about 29%, the Park Service said.

“Vehicular demand for roads and parking in Yellowstone is expected to exceed capacity between 2021 and 2023,” according to a 2016 study, despite the fact that the park has about 16,680 parking spots in 254 lots and pullouts. Sholly said he’s not a fan of adding more parking to address the situation.

Sholly is already predicting Yellowstone will soon top 5 million visitors in a year. The current peak year was 2016 with 4.2 million visitors. This year, he said the park could see 4.7 million tourists, accelerating the urgency for finding transportation solutions.

“We need to have reasonable actions that are well thought out,” Sholly emphasized.

Because of its large size, Yellowstone presents unique transportation challenges, but the issue of traffic congestion isn’t isolated to Yellowstone. Nationwide, between 2009 and 2018, annual park visits grew from 283 million to 318 million annually, an increase of 11%, according to the National Park Service. In response to the increased visitation, parks are experimenting with alternative bus fuels, electric buses and bike share opportunities.

The shuttle testing is part of Yellowstone’s Visitor Use Management Program, which focuses on understanding and responding to increased visitation in the following areas: impacts on resource conditions; impacts on staffing, operations and infrastructure; impacts on the visitor experience; and impacts on gateway communities and partners.

Although capable of operating on their own, the TEDDY shuttles will be staffed with a driver to make adjustments to unusual occurrences like a vehicle sticking out of a parking space as well as to ensure users feel comfortable with the automated technology.

Bob Ryner, a retired principal, signed on to be one of the six drivers who will be working in the park this summer.

“This is the reason I joined Beep, to be here,” he said.

He’s looking forward to interacting with the wide variety of visitors Yellowstone attracts, as well as the park’s world-renowned wildlife. He’s also willing to override the automated route for unique and unusual scenarios.

“If I see a bear with a deer leg in its mouth, I’m going to stop and look,” he said. 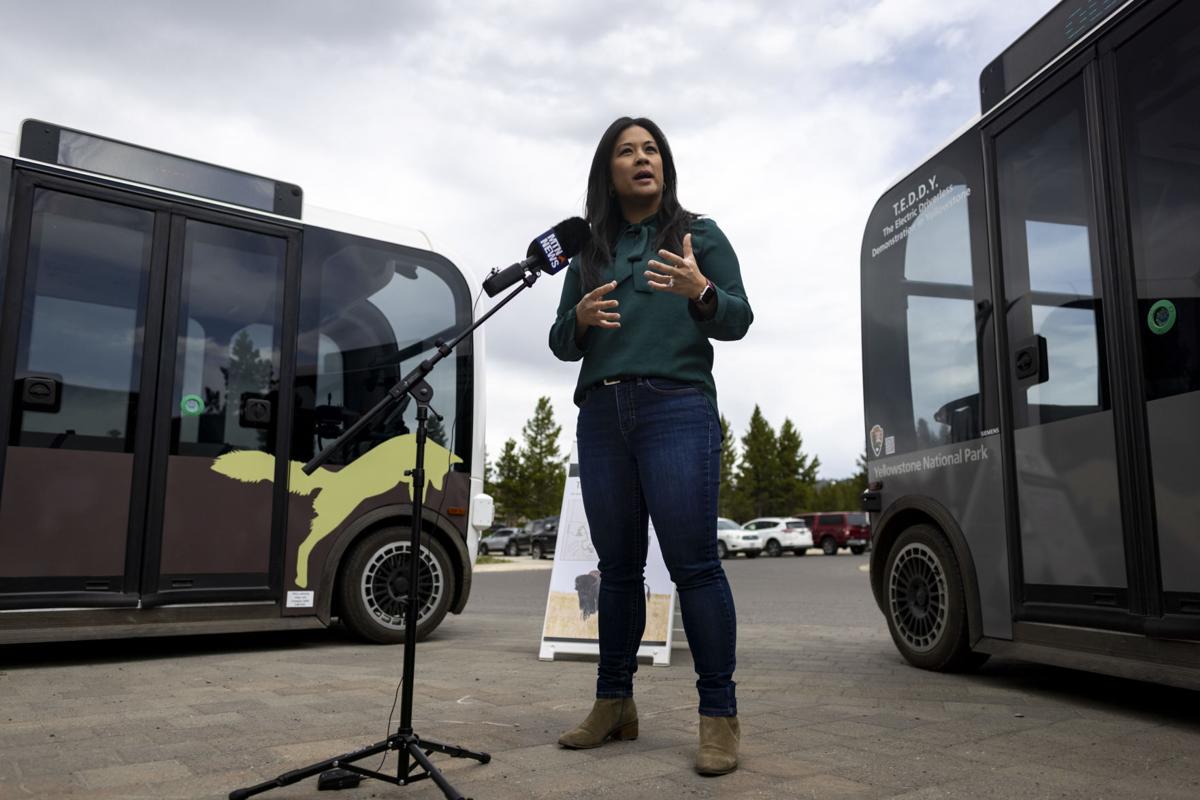 Raquel Asa speaks to members of the media during a press event demonstrating the electric automated shuttles at Canyon Village in Yellowstone National Park on Tuesday, June 8. 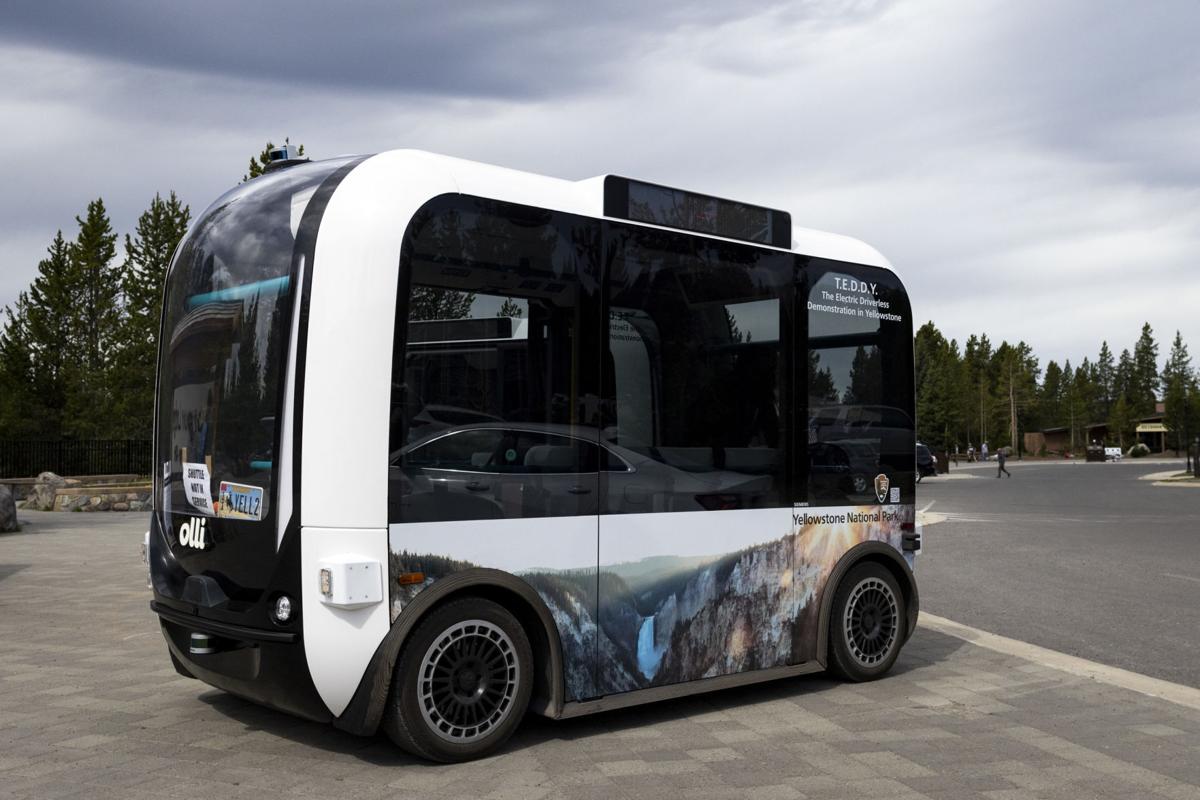 A T.E.D.D.Y. shuttle is shown during a press event at Yellowstone National Park. 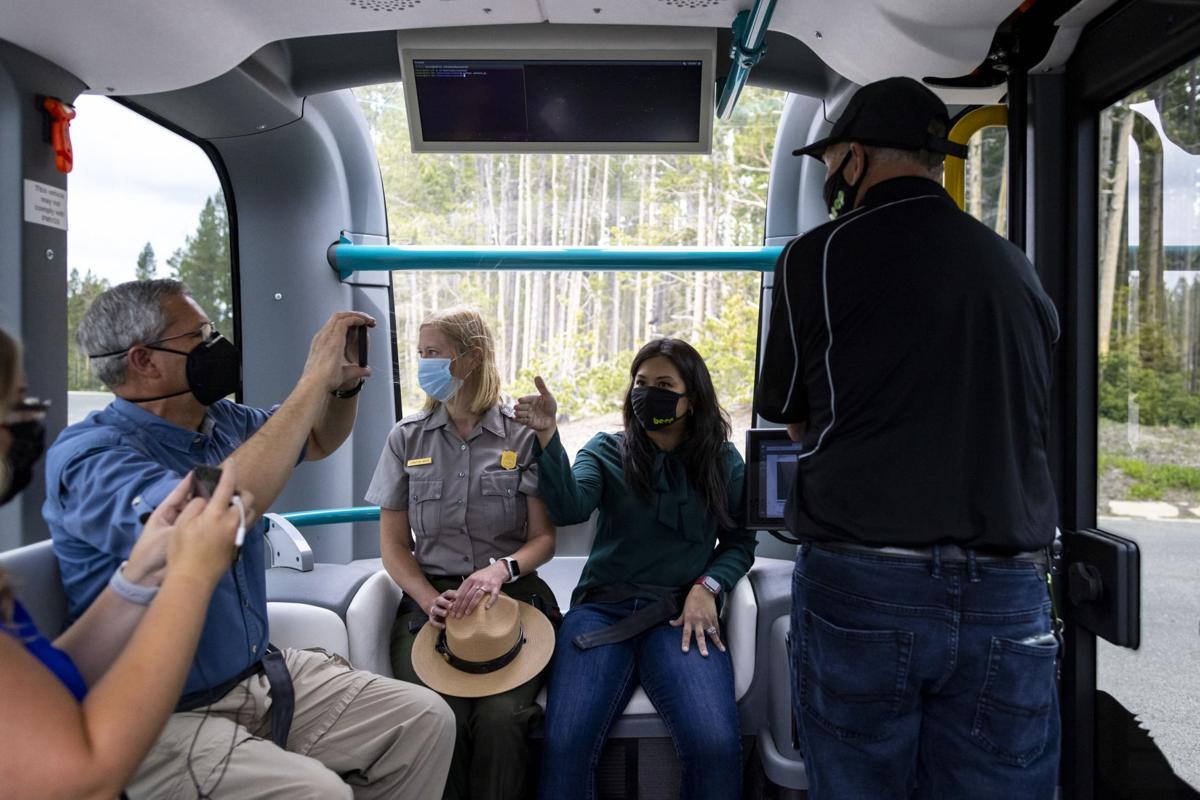 Park officials and members of the press ride in a T.E.D.D.Y. shuttle during a press event demonstrating the electric automated shuttles at Canyon Village in Yellowstone National Park on Tuesday. 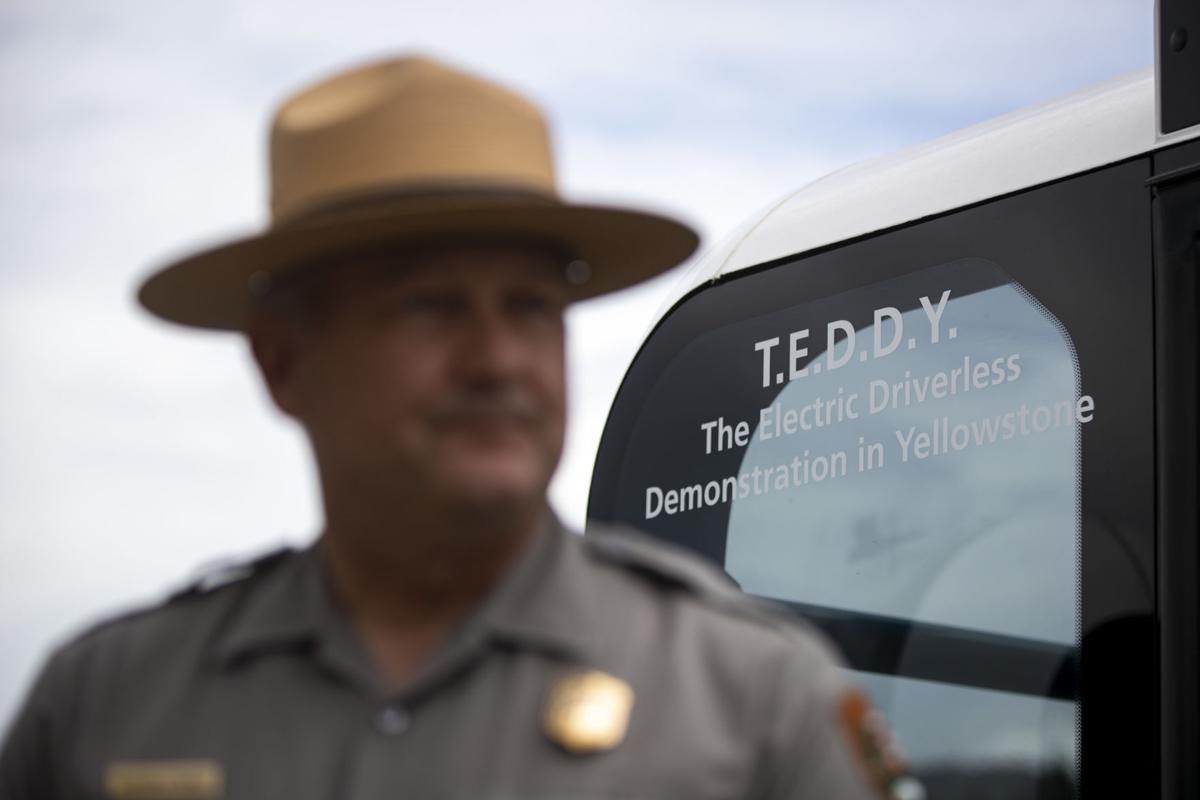 Cam Sholly stands in front of a T.E.D.D.Y. shuttle during a press event demonstrating the electric automated shuttles at Canyon Village in Yellowstone National Park on Tuesday.