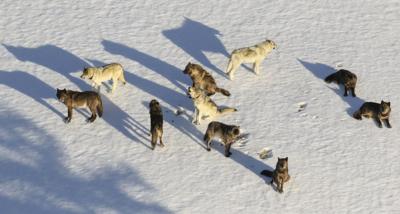 Yellowstone National Park’s Northern Range is arguably the best place in North America to see wolves, including black wolves, which are scarcer in most other populations.

About half the park’s wolves, last estimated at around 95 animals, have a black coat. The other half of Yellowstone’s wolves are mostly gray. White-coated wolves are rare in the park.

The gene mutation that makes a wolf’s hair black has been known for more than a decade. It’s also been hypothesized that black-coated wolves, because of this mutation, are better equipped to survive outbreaks of deadly canine distemper virus (CDV).

“I started this research 10 years ago and found a significant association between exposure to CDV and coat color when I analyzed Yellowstone wolves’ survival,” said Sarah Cubaynes, of the University of Montpellier in France, via email. “But at the time we tried to publish the paper in Nature, and they said we lacked data from other populations to confirm this relationship.”

Cubaynes was the lead author of the new study titled “Disease outbreaks select for mate choice and coat color in wolves,” published in the October issue of Science. The 12 co-authors include several known to Yellowstone wolf research, such as Dan Macnulty, associate professor at Utah State University; Dan Stahler and Doug Smith of the Yellowstone Wolf Project; and Emily Almberg, former disease ecologist for the Montana Department of Fish, Wildlife & Parks.

In the past decade, Cubaynes and her colleagues collected data on 12 other wolf populations spread across North American. By expanding the research, she said the study “found a positive association between proportion of black wolves and disease prevalence, and an increased probability of being black when exposed to the virus.”

“The frequency of canine distemper virus outbreaks across North America drives the geographic distribution of black wolves, because the gene that causes black coat color also protects against the virus,” study co-author Dan Macnulty explained. “Across 12 study populations, including wolves in Yellowstone and Grand Teton national parks, wolves exposed to distemper were more likely to be black than gray, and black wolves were more common in populations where CDV was more prevalent.”

Cubaynes said she also reanalyzed 10 more years of Yellowstone wolf data, “including new CDV outbreaks, and found an even stronger difference in the survival rate” between black wolves with the gene mutation and gray wolves exposed to the virus. With more data, the trend was confirmed, and we were the first to show a relationship between disease and coat color.”

Canine distemper virus is a highly contagious disease closely related to measles in humans and rinderpest in cattle. The virus that causes CDV is believed to have jumped from humans to their domesticated dogs in South America, sometime between 1,600 to 7,200 years ago. Another theory is that humans who crossed the Bering Strait Land Bridge at the end of the last Ice Age brought CDV to North America via their dogs. Dogs breeding with wolves centuries ago transferred the gene mutation.

“After a single introgression event into a North American wolf population in the past 7250 years, the black allele has undergone a selective sweep, revealing one of the most rapid spreads of an adaptive variant known in vertebrates,” the study said.

In dogs, canine distemper usually infects puppies. It can cause vomiting, coughing and lethargy as it attacks the nervous system. It is usually fatal.

The reason Yellowstone sees more CDV outbreaks is related to “human density,” the study noted. “CDV requires a high population density to persist, and because wolves live at low densities, CDV cannot be endemic within a population. Instead, it requires a broad community of carnivores to persist and intermittent spillover transmission back to wolves.”

The research also revealed evidence that “Yellowstone wolves were more likely to choose mates of the opposite color when distemper outbreaks were frequent, which maximized the chance that their pups were black and therefore resistant to distemper,” Macnulty said. “This helps explain why most wolf breeding pairs in Yellowstone involve opposite colored individuals.”

The researchers built a demographic model, Cubaynes said, showing, “This strategy is actually observed in Yellowstone, based on field observations, and a previous study.”

Such selection of a mate occurs even though gray-coated wolves are known to produce larger litters of pups. In fact, many “insects, amphibians, reptiles, birds and nonhuman mammals” may use coloration as a signal to mates that they are disease resistant, the study’s authors wrote.

“Overall, the study highlights the profound and varied effects that disease can have on the ecology, evolution, and behavior of wild animal populations,” Macnulty said. “And because the gene for black coat color likely originated in domestic dogs – and was passed on to wolves 1,600-7,300 years ago – the study also reveals a deep biological relationship between wolves and humans in North America.”

Yellowstone’s wolves were introduced from a variety of Canadian packs to ensure genetic diversity. The capture and transplants took place between 1995 and 1997. The canines thrived in the park, topping out at around 171 individuals, before populations declined and stabilized.

The movement of wolves into neighboring Montana, Idaho and Wyoming resulted in them being removed from the endangered species list in 2011 (2016 in Wyoming). Wolves that wander out of Yellowstone can be shot or trapped, accounting for why 17% of the adult population of wolves are killed by humans. In the Greater Yellowstone Ecosystem, which includes the surrounding states, that mortality rate due to humans climbs to 77%, according to the park’s data.

One of Yellowstone’s most popular black wolves was a male with the number 302M. The wolf was the star of filmmaker Bob Landis’ 2010 film “The Rise of Black Wolf.” The male was also known as the Casanova wolf for being a prolific breeder.

Cubaynes credited her research to the intricate study of the Yellowstone animals’ behavior, population dynamics and role in the ecosystem.

“This project is a unique program which has gathered incredibly detailed life history, demographic, behavioral, epidemiologic data on wolves and their environment over the years,” she said.

“Wolves are tracked all year long using observations from the air, and detection of GPS and VHS collars,” Cubaynes wrote. “Two intense monitoring sessions take place every year during one month, during which each team of volunteers follow closely each pack every day from dawn to dusk and take as much info as possible on their movement, behavior, hunting, interaction within the pack members and with other packs and with other species, etc. This kind of data of great quality on wild and elusive animals is very rare, and is incredibly valuable for science. This study could not have existed without the Yellowstone Wolf Project. Observation of the wolves there has triggered the ideas, and then provided the data necessary to test these ideas. Data collected on other populations have helped to confirm that the same pattern can be observed elsewhere too.”

Caldera chronicles: 'Ancient Yellowstones' are buried to the southwest

The track of the Yellowstone hotspot is defined by a series of old caldera systems that get older the farther to the southwest you get from Yellowstone.  Because they are mostly buried, it took decades of geologic investigations to identify these features.

A recent studies found that in high alpine environments in the Rocky Mountains where mountain goats and bighorn sheep compete for resources, goats displace sheep. 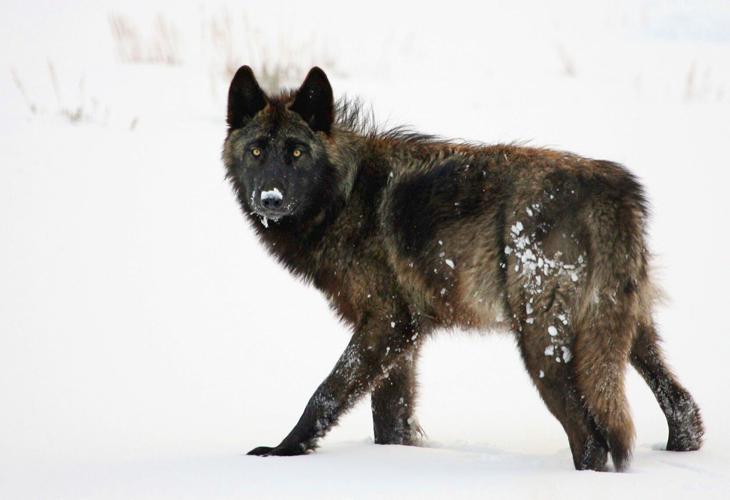 A recent study shows that black wolves, like this one photographed in Yellowstone National Park in 2009, are resistant to canine distemper virus, a deadly disease. 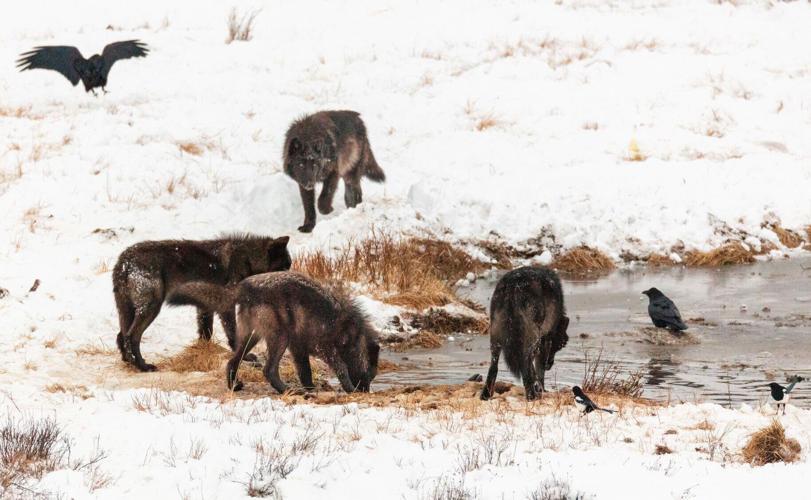 Wolves feed on a bison carcass at Blacktail Ponds in Yellowstone in 2019. Black wolves make up about half the population in the park. Only interior Alaska wolves have a comparable rate of black-coated wolves. 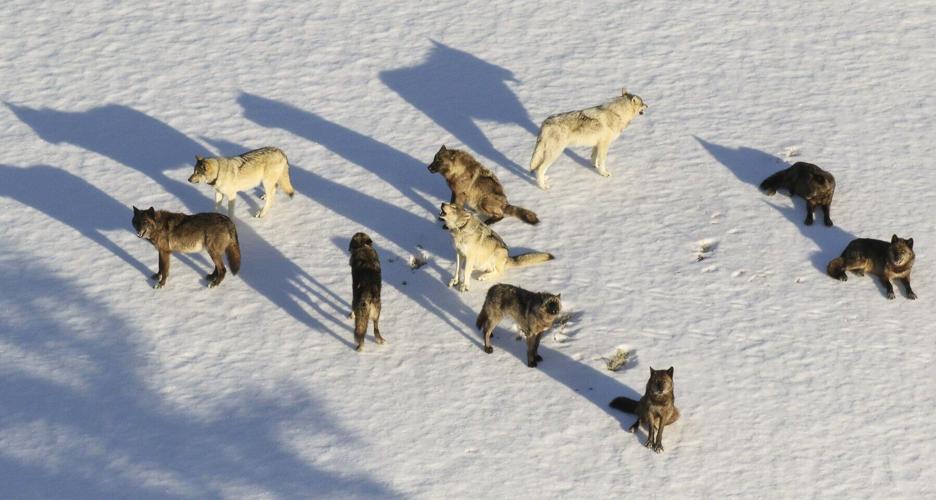 Yellowstone National Park's Junction Butte Pack was photographed from the air in March 2019 showing the ratio of black to gray wolves. In the park, it's about a 50-50 ratio. 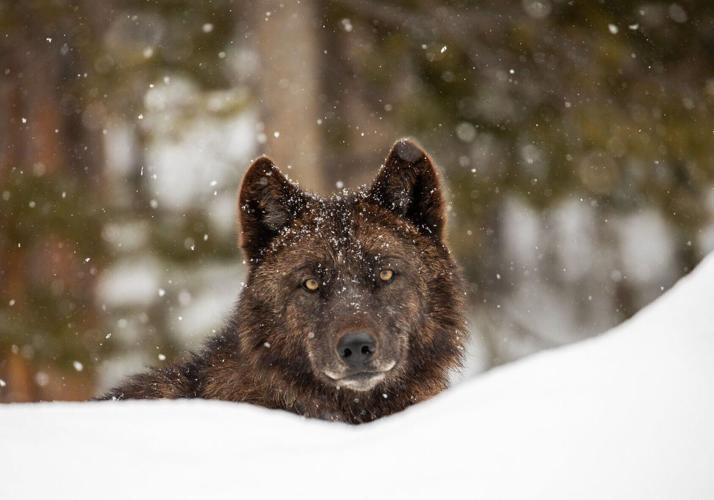 A recent study has shown that during distemper outbreaks, wolves were more likely to chose a black-coated mate.