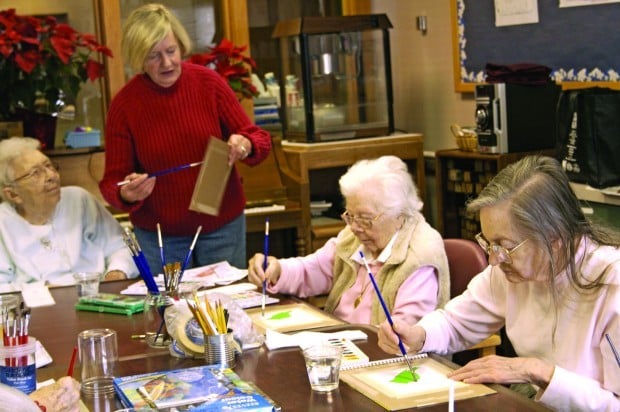 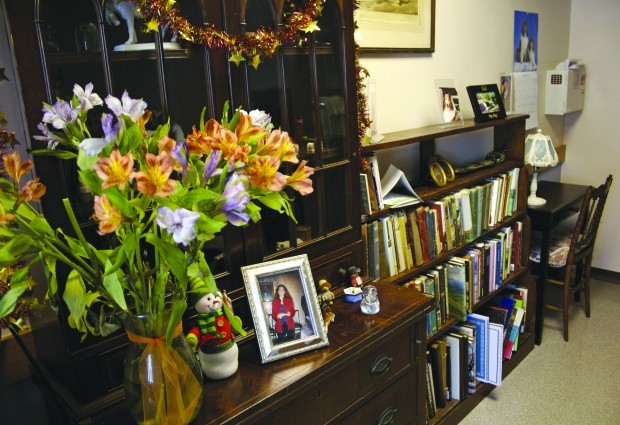 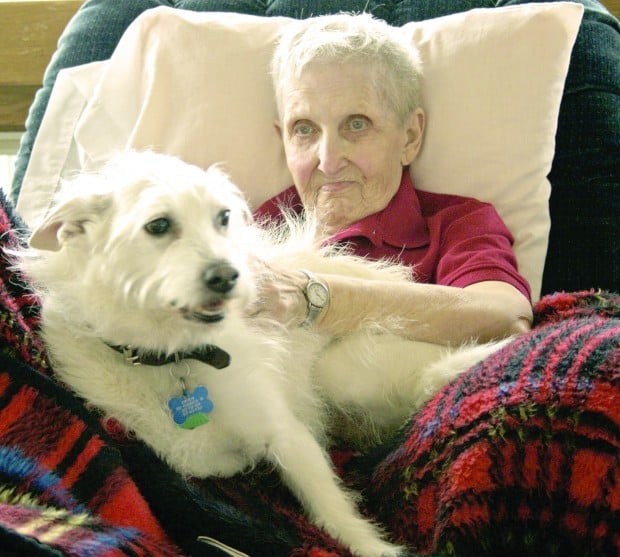 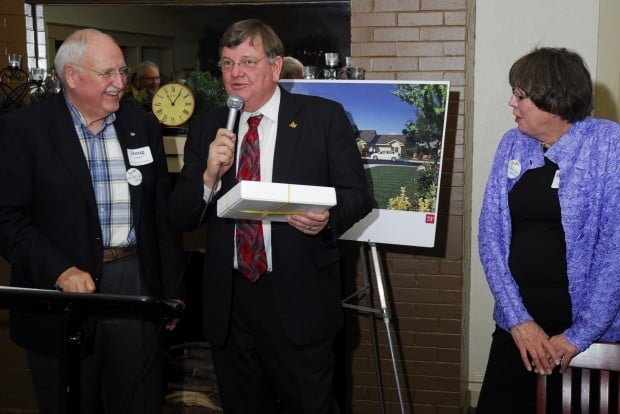 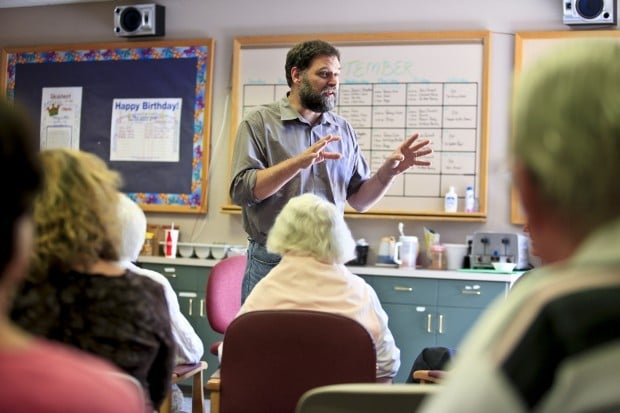 Dr. William H. Thomas discusses his Eden Alternative and Green House models for eldercare with staff and residents and their families at St. John's Living Center in Jackson. (Photo by Ashley Wilkerson) 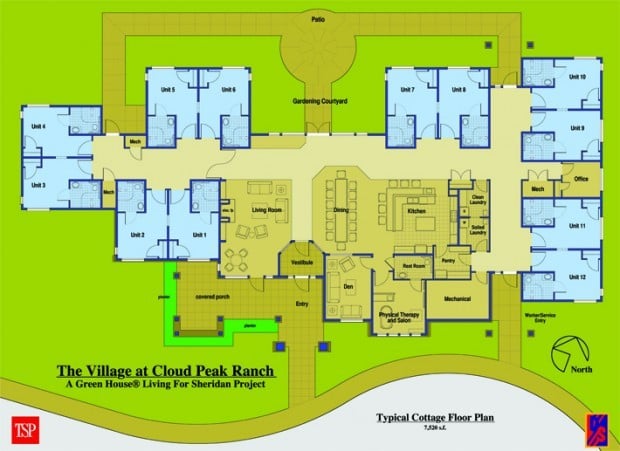 Rather than housing 100 patients, one Green House comprises about 10 residents, each with his or her own private room and bathroom. This rendering shows designs for Green Houses in Sheridan. (Courtesy of Green House Living for Sheridan)
By Teresa Griswold Live Well contributor

She gives each student a sample painting, providing inspiration for each to create his or her own rendition.

A student once asked that her finished paintings be donated to a nursing home. The only thing awry about the woman's request was that she was living in a nursing home, recalls Melanie Fabian, a social worker at St. John's Living Center in Jackson.

"To her it felt like she was at home," she said.

That's the essential goal of the Eden Alternative: to examine the status quo in long-term eldercare and find creative ways to change the culture of nursing homes and put elders' needs first.

Communities throughout the state are reinventing long-term care with the help of the Eden Alternative and the Green House Project. The 2007 Long-Term Care Choices Act pushed Wyoming to become a national leader in long-term eldercare. The act awarded grants to three towns to explore alternatives to traditional nursing homes and removed limitations on the number of beds allowed in those communities.

"Because we are a small state, we have a different mind-set than some of the larger states. We still look at people as people and not just as numbers," said Virginia Wright, interim superintendent of the Wyoming Life Resource Center in Lander. "I've worked in many states, and I have never seen as high of standards as I have seen here."

Wright moved to Wyoming to live permanently about 15 years ago after coming here initially as a two-year consultant. Before that, she worked in group homes for people with intellectual disabilities in four other states on the East Coast.

The Eden Alternative is a philosophy based on 10 principles that seeks to remedy loneliness and other causes of suffering among elders. It was founded in 1994 by Harvard Medical School graduate Dr. William H. Thomas, an international authority on geriatric medicine and eldercare.

At one time, Thomas worked in a traditional, long-term care facility. With the help of an elder there, he woke up to what was really going on, he said. He realized if he was not addressing loneliness, helplessness and boredom, he was not doing his job.

He said depression is fairly common in nursing homes, but it is a clinical illness, and there is good treatment for it.

"Whereas with the pervasiveness of loneliness and boredom, there is no pill that can offer relief," he said. "It requires a social solution."

Providing loving companionship, opportunities to be of service, engagement in meaningful activities and instilling variety and spontaneity in daily life are the antidotes lined out in his Eden Alternative model.

"It makes perfect sense to me," said Heather McKee, administrator of the Sublette Center in Pinedale. "The worst thing you can do for someone is to have them lose their dignity and sense of individuality. We want our residents here to thrive - to maximize their skills and gifts that they continue to have."

St. John's Living Center in Jackson is the first assisted-nursing facility in Wyoming to be registered as an Eden Alternative home.

There, residents are asked to assist one another as a means of sharing their talents.

Once when a player piano was delivered, a resident stormed into her office, fearing she was replaced, she said. The resident played the piano at group gatherings as part of her contribution to the community.

In keeping with an Eden Alternative principle which states that elders deserve easy access to human and animal companionship, St. John's Living Center accepts resident pets, such as cats, dogs or birds, so long as a resident or caregiver agrees to oversee its care.

Intergenerational programs, open dining and unrestricted visiting hours are other changes implemented by St. John's Living Center and other homes that have associates trained in the Eden Alternative.

The caregivers are relationship oriented rather than task oriented at St. John's Living Center, Hansen said. And there's a consistency among the primary care workers. The same certified nursing assistants work with the same residents each day.

Keith Stevens, who has been a CNA at St. John's Living Center for three years, said he witnessed people with dementia who were regularly acting out become naturally calm and gentle as a result of participating in a Bible study he leads as part of the Eden philosophy.

"They are no longer living in an institutional setting. It is not a white, sterile environment," he said. "It is more homelike, and it's like taking care of your friends."

These relationships between caregivers and residents are not just good for the residents; they reduce caregiver burnout. The national turnover rate for caregivers is over 100 percent per year, according to Thomas.

"Staff stability is an important part of quality. In order to get that, you have to have a plan," Thomas said.

According to Thomas, published research from the University of Minnesota shows that organizations that embrace this philosophy of care do better in state surveys. Caregivers are more likely to stay on the job, and it is better for the elders and their family members, creating a greater degree of confidence.

Adopting the philosophies of the Eden Alternative requires culture change, which can take time.

"One of the things they say at Eden is that it's a process," said McKee, of the Sublette Center in Pinedale. "We continue to seek ways that we can help our elders both at the nursing home and in the community."

While St. John's Living Center in Jackson is the only facility in the state registered as an Eden Alternative home, eldercare providers throughout the state are trained in the care model, and many homes have implemented its principles. Here are just a few examples of how some homes have incorporated Eden Alternative philosophies:

Taking the Eden Alternative philosophy a step further is the Green House Project, another brainchild of Thomas, which debuted in 2002.

A conventional greenhouse conjures images of plants, thriving and blossoming in a nurturing environment.

"That is how the Green House Project got its name. It grows people," Thomas said.

The Green House is a departure from traditional nursing and assisted-living homes. Rather than housing 100 patients, one house comprises about 10 residents, each with his or her own private room and bathroom. Individual cottage-style houses are clustered with other houses, but each is stands on its own and operates much like a family unit with consistent teams of caregivers and residents working together in community.

Residents cook meals and eat in a central dining room, as well as engage in household activities from doing laundry to gardening. It is similar in concept to the Eden Alternative, but is a home built from the ground up rather than utilizing an existing facility.

"The Green House Project is the Eden Alternative and Dr. Bill [Thomas] with a blank piece of paper redesigning what eldercare could be like," said Denise Hyde, community builder for Eden Alternative.

There are more than 60 Green Houses around the U.S., and Thomas said Wyoming's rural nature lends itself to the cottage-style concept. Rather than elders having to leave their communities, families and churches to live in far-away, large institutions, the smaller-scaled, community-based Green House is more responsive to the needs of elders from rural communities, he said.

Facilities pay to use the Green House brand, and in return receive support such as professional assessment of architectural plans, on-site training, frequent teleconferences on pertinent topics and provisions of a financial model. The organization also maintains a Web site and hosts an annual meeting.

Those in other parts of the state are following similar paths to transforming elder and long-term care, though not specifically through the Green House Project. In Pinedale, where the Eden Alternative was implemented in the Sublette Center, a group of citizens initiated a senior housing coalition to envision the future of senior housing, according to Sublette Center administrator Heather McKee

"We are focusing on aging and place rather than institutionalizing our elders," she said. "We are hoping to build partnerships in Sublette County in order to build communities and expand the Green House Project [idea] to serve a greater number of people."

In Casper, the nonprofit Wyoming Dementia Care is poised to build homes that are suitable to residents who have dementia and Alzheimer's disease, according to Mary Hein, board chairwoman. It is using the Green House idea, but not the copyrighted label, Hein said, because at about $100,000 for the whole service package, it is cost prohibitive.

Bill Luker donated 17 acres at East 12th Street and Newport in Casper where Luker Village will be built in memory of his wife, Betty, who died with Alzheimer's disease. The village will consist of a group of cottages that will house up to 12 residents. The homes will be designed to make things as homelike as possible, Hein said.

"One of the things about this plan is that the residents need less medication, eat better and are happier," Hein said. "Needing less medication is a big issue in terms of overall health."

Though not an eldercare facility, the Wyoming Life Resource Center in Lander has been a leader in the cottage-style concept. It is an intermediate care facility for people with intellectual disabilities. In the mid-1990s, staff moved away from the medical model and went to an interdisciplinary team approach in which the guardians, parents and individuals are all involved in a model of care based on the Eden Alternative. Residents live in small houses known as community buildings, similar to the Green House Project concept, and not in dormitories, Wright said.

Learn more about Thomas' philosophies behind the Eden Alternative and Green House Project in his book, "In the Arms of Elders: A Parable of Wise Leadership and Community Building."

* Teresa Griswold is a healthy living activist who is passionate about making a positive difference in the lives of others. Visit her at www.healthylivingactivist.com. She lives in Jackson.

Dr. William H. Thomas discusses his Eden Alternative and Green House models for eldercare with staff and residents and their families at St. John's Living Center in Jackson. (Photo by Ashley Wilkerson)

Rather than housing 100 patients, one Green House comprises about 10 residents, each with his or her own private room and bathroom. This rendering shows designs for Green Houses in Sheridan. (Courtesy of Green House Living for Sheridan)
© Copyright 2021 Casper Star Tribune, 170 Star Lane Casper, WY | Terms of Use | Privacy Policy
Powered by BLOX Content Management System from TownNews.com.
You don't have any notifications.