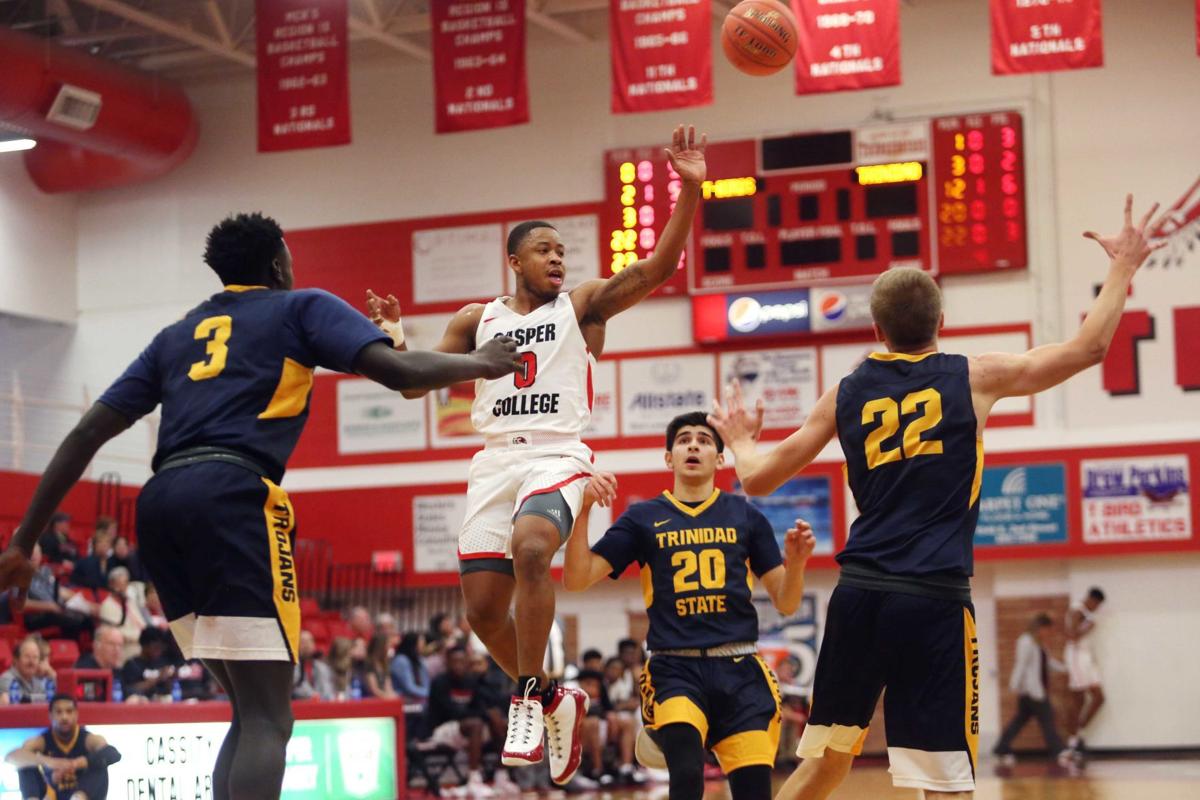 Casper College's Jalen Harris passes the ball to a teammate during the T-Birds' game against Trinidad State Junior College on Nov. 1 in Casper. 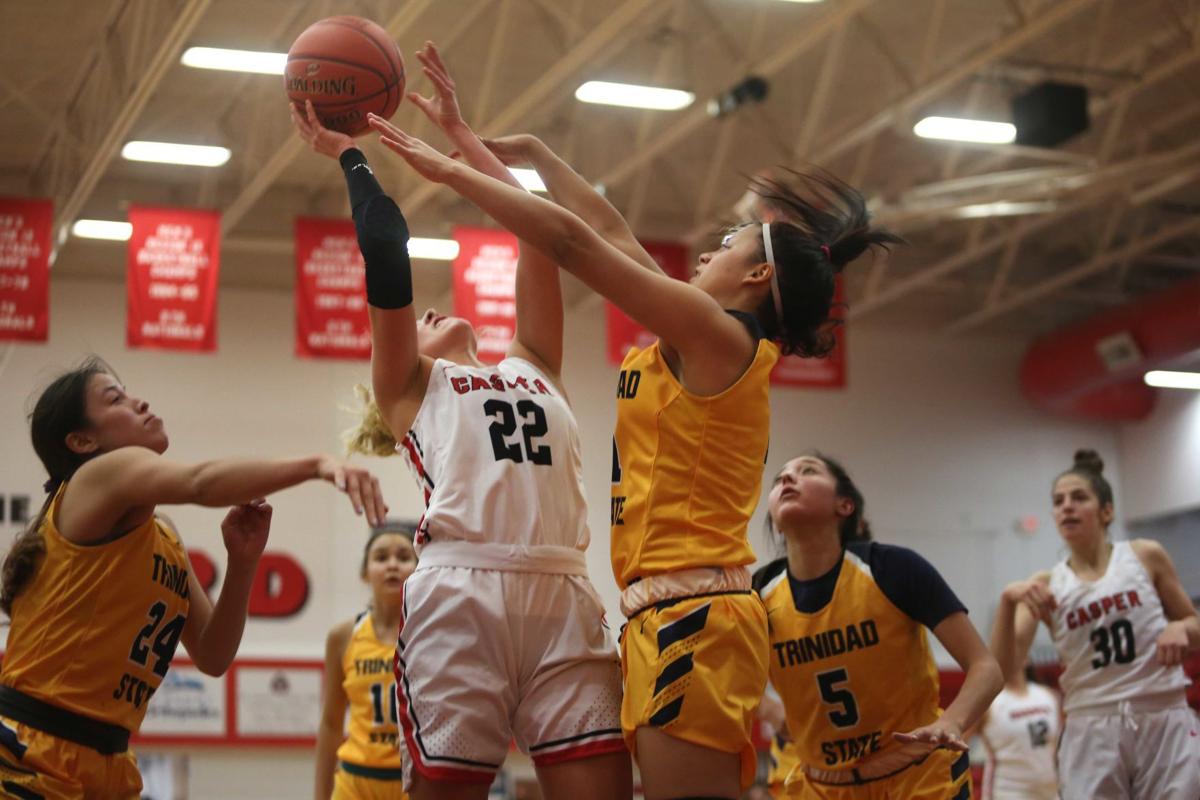 For the first time in more than a month, Swede Erickson Thunderbird Gym will be home to a Casper College doubleheader when the T-Birds host Sheridan College on Wednesday.

The T-Birds, who haven’t played at home since Dec. 14, opened Region IX North play last week with mixed results. While the men’s team (15-2) moved up to No. 16 in the latest NJCAA rankings by sweeping Central Wyoming College and Laramie County Community College, the women’s team (14-3) fell to No. 22 after winning at CWC before losing at LCCC on Saturday.

The T-Birds enter Wednesday’s game having won nine in a row, during which they have averaged 104.1 points per game. They had hit triple digits in six consecutive games until Saturday’s 89-69 victory over LCCC.

“I was a little concerned going into the Central Wyoming game because everybody had been home for two weeks,” first-year head coach Shaun Gutting said. “I still think we’re trying to get back to where we were right before break. But our guys were really locked in for that one and they proved that they can go win a tough conference road game.

“The LCCC game was a little bit more of a back-to-reality game. I think we walked away from that one knowing we’re not where we want to be.”

Thankfully, Gutting said, his team has plenty of games remaining to get things figured out.

“This is the perfect time of year to be dealing with that,” he said. “Sure, we want to be good on January 15, but we really want to be good at the end of February. So whatever we can do to keep building to that is important.”

It helps that the T-Birds have a number of offensive options to build around. Chief among them is 6-foot-3 sophomore guard David Walker, who is averaging 22.8 points per game. Sophomore point guard Jalen Harris (15.5) and sophomore big man Philip Pepple Jr. (12.5) are also averaging double figures, with Isaiah Banks (9.2), Dathan Satchell (8.3), Tavion Robinson (8.1) and Donovan Freeman (7.6) averaging a combined 33.2 points per game.

“Having a guy like David Walker, who can score from anywhere, really helps you out,” Gutting admitted. “Having a guy like Jalen Harris, who can quarterback the whole offense, definitely helps. It takes the load off the guys who are in the post, who are wondering where their buckets are going to come from.

“They’re going to come from us getting them the ball near the rim to get them easy looks. Getting guys easy shots is what has succeeded for us.”

Unlike last year, Wednesday’s game against Sheridan College won’t be a matchup of Top 25 teams. The Generals (13-5, 1-1) graduated a number of frontcourt players off last year’s team that lost the Region IX championship game to the T-Birds but still joined them at the NJCAA Championships. Leading the way for the Generals this season are guards JoVon McClanahan (22.4 ppg) and Marcus Stephens (16.9).

“They’re not going to be as physically dominant as they were last year,” Gutting said, “but they have a lot of really good guards who know how to score.”

Obviously, so do the T-Birds. And as they continue to define their roles – they had to replace all five starters off last year’s team – they expect to make a run at another Region IX title.

“Hopefully we can keep embracing who we are, fight through adversity and figure out what it takes to win the region,” Gutting said.

The T-Birds were flying high right before the semester break. They were 13-1 with the only loss coming on the road to No. 7 Western Nebraska Community College. But the T-Birds lost to Miles Community College to end the first semester and opened Region IX play 1-1.

Despite shooting a combined 35.3 percent (67 of 190) and averaging just 62.3 points per game in their last three games, head coach Dwight Gunnare believes the T-Birds’ problems go beyond not being able to put the ball in the basket.

“We have to get a lot better at the fundamentals, executing the game plan and having better focus during the game,” said Gunnare, who won his 300th game at Casper College earlier this season. “Our last three games we didn’t shoot it well. But if we don’t make those fundamental mistakes defensively we were still in position to win those games.

“Shooting is going to come and go, but this team has shown it can light it up. It’s not that we’re not getting good shots, it’s just that we’re not making those shots. So we have to be almost perfect in everything else.”

Freshmen Natalia Otkhmezuri and Marija Bakic are the only players averaging in double digits for the T-Birds at 14.4 and 10.6 points per game, respectively, although sophomore Mya Jones (9.9) and her sister, freshman Juneau Jones (9.0) are close.

Those four and the rest of the T-Birds will look to get back on track against a Sheridan College team that is 11-6 overall and has won five in a row.

“Sheridan is a very balanced team,” Gunnare said. “They’re a complete team on their main focus and that’s the dribble-drive. They get out in transition. They’re good at getting to the rim and either finishing or getting fouled. They’re good at interior passing. And they’re very good at stopping and kicking it out to the 3-point shooter.

“They do all of those things as well as anybody we’ve played.”

HE SAID IT: ““Hopefully we can keep embracing who we are, fight through adversity and figure out what it takes to win the region.” -- Casper College men's coach Shaun Gutting.

No. 16 Casper College basketball braces for No. 15 Western Wyoming

Swede Erickson Thunderbird Gym should be hopping Saturday when 16th-ranked Casper College hosts No. 15 Western Wyoming Community College in a …

Back at Swede Erickson Thunderbird Gym and with something to prove, the Casper College women's basketball team exorcised more than a few demon…

The 16th-ranked T-Birds got a career-high 23 points from Traizon Byrd and had five players finish in double figures.

David Walker had a game-high 25 points to lead the No. 19 T-Birds to their eighth consecutive victory.

Casper College's Jalen Harris passes the ball to a teammate during the T-Birds' game against Trinidad State Junior College on Nov. 1 in Casper.