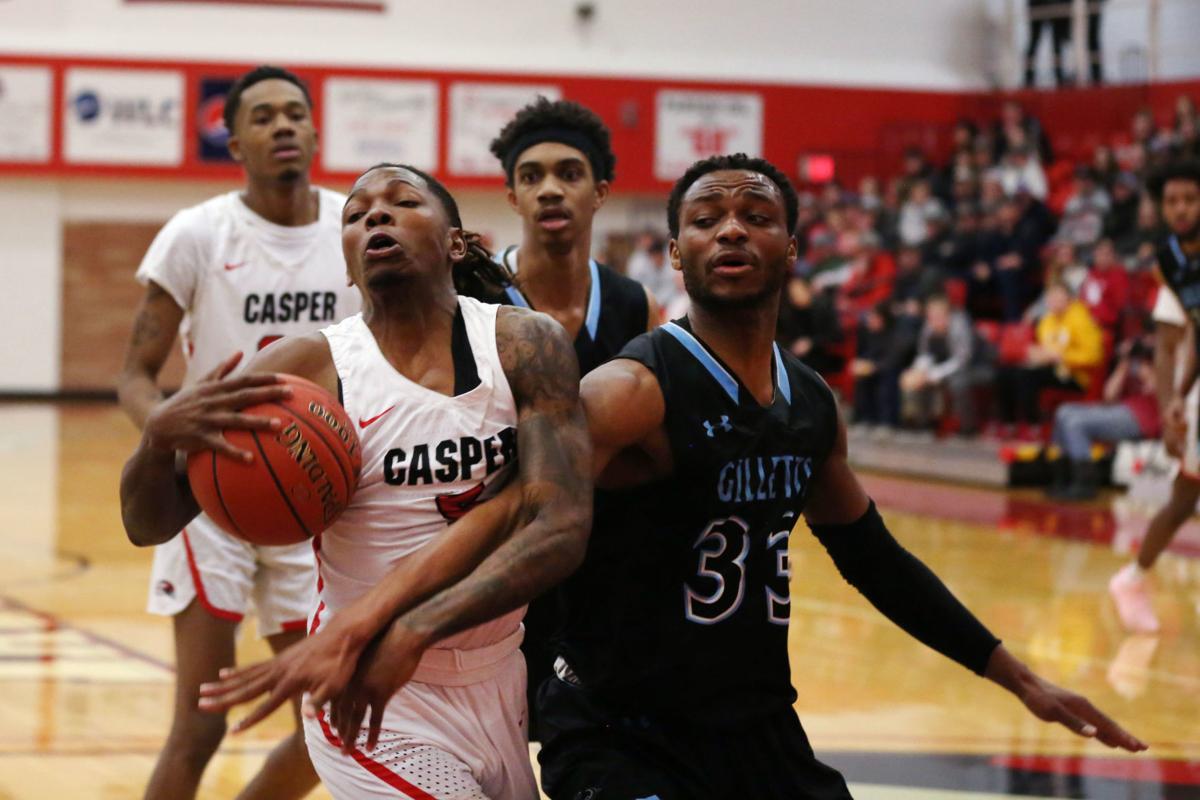 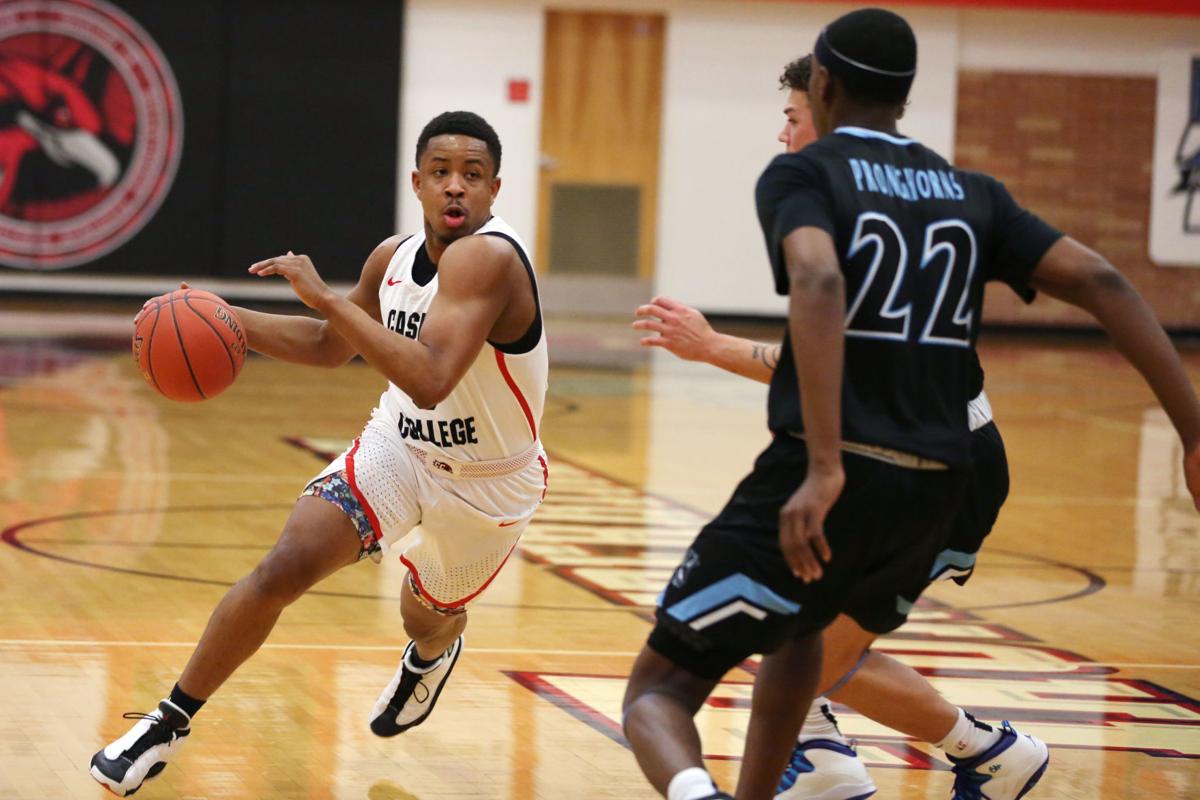 Casper College point guard Jalen Harris drives to the basket in the T-Birds' game against Gillette College on Feb. 19 at Swede Erickson Thunderbird Gym in Casper.

Sabrina Riley made sure Sophomore Night for the Casper College men’s basketball team got off to a rousing start Wednesday with a pitch-perfect rendition of the National Anthem.

Prior to the start of the Thunderbirds’ game against Gillette College, Riley, the mother of sophomore guard Isaiah Banks, was handed a microphone and walked to center court while Banks and his teammates exchanged nervous smiles. Even though the mic failed to work through the first verse, Riley never hesitated.

“She told me a couple of weeks ago that she wanted to sing the National Anthem before the game,” Casper College head coach Shaun Gutting said. “I agreed even though I had never heard her sing before. I was just hoping she knew what she was doing ... and she did. She was awesome.”

For a large majority of the game, so were the T-Birds. They built double-digit leads in both halves before having to hang on for a 99-91 victory to move into sole possession of second place in the Region IX North standings. Casper (23-5, 10-3) has a one-game lead over Gillette and trails No. 17 Western Wyoming Community College by one game heading into Saturday’s final regular season contest at Sheridan College.

Following Riley’s flawless performance it was the Pronghorns who jumped out to a quick lead before a personal 7-0 run by T-Birds sophomore David Walker tied the game at 7-all. The sub-region rivals traded buckets for a 5-minute stretch before Banks fueled a 10-0 run to give the T-Birds a 30-17 lead. Banks scored an and-one on a follow shot, had a putback, converted a layup in traffic and assisted on Dathan Satchell’s transition 3 pointer during the 2-minute flurry.

“When Isaiah is playing well it gives us such a different element,” Gutting admitted.

Banks later gave the T-Birds a 45-32 advantage with a steal and layup as they took a 47-37 lead into the locker room.

Even more impressive than the 10-point margin was the T-Birds’ 35-18 rebounding advantage. In their loss to Gillette on Feb. 5 the T-Birds were outrebounded 50-39. Casper finished the game plus-15 (53-38) on the boards.

“Rebounding is something we’ve talked about all year with these guys,” Gutting said. “Our effort in the first half was tremendous. Sometimes we rely on our size and we don’t do a good job of being tough enough to come up with loose balls. Tonight, we did, and we set the tone early.”

Point guard Jalen Harris, who finished with five rebounds to go along with 24 points, agreed that rebounding was a point of emphasis going into the game.

“The last time we played they kind of punked us on the boards so we knew they were thinking they could do that again,” he said.

Casper threatened to blow the game open early in the second half. Sophomore David Walker threw down an emphatic one-hand dunk off a fast-break alley-oop from Tavion Robinson and, minutes later, Robinson was on the receiving end of a similar lob pass from Walker to push the T-Birds’ lead to 59-45.

The 6-foot-6 Robinson was asked which one he enjoyed more.

“Probably throwing it because I don’t do that a lot,” he laughed, “but catching that one was fun, too.”

The T-Birds pushed the margin to 19 points (69-50) thanks to six consecutive points from Harris, the last four of which came as a result of four free throws after back-to-back technical on Gillette, and a power move in the post by 6-10 Philip Pepple Jr.

The double-digit lead remained until Gillette’s Teonta McKeithen made three triples in a row and added a breakaway layup to cut the margin to 88-83 with 3 minutes remaining.

With a chance to put the game away at the charity stripe, the T-Birds faltered. After making 11 of their first 12 free-throw attempts, they made just 2 of their next 8 and the Pronghorns made it a one-possession game with more than 2 minutes remaining.

But the T-Birds refused to disappoint their fans on Sophomore Night.

Harris found Byrd cutting to the basket on a baseline out-of-bounds play for a one-hand jam. Tavion Robinson, who had missed five consecutive free throws, finally got one to fall. And Pepple made both his freebies to restore the 10-point margin with just 43.7 seconds on the clock. Harris was 4 of 6 in the final seconds to salt away the victory.

“We didn’t shoot the ball particularly well from 3,” Gutting said, “so pulling out a game like this where you really have to grind it out, make free throws, get stops, finish through contact is what we needed. A game like that against a tough team is a really good experience for us heading into the postseason.”

Walker finished with a game-high 25 points to lead five T-Birds in double figures, followed by Harris (24), Byrd (14), Banks (11) and Robinson (10). Pepple added eight points and eight rebounds while Banks and Robinson both pulled down seven boards.

The T-Birds next head to Sheridan for the regular-season finale before hosting a first-round game next Saturday.

“Now it’s survive and advance,” Gutting said. “We’ve got to treat the Sheridan game like it’s a first-round game. We have to go after it every day knowing that our next game might be out last one.”

BOARD WORK: After getting outrebounded by Gillette in a loss two weeks ago, the T-Birds were plus-14 (53-39) on the boards Wednesday.

HE SAID IT: “The last time we played they kind of punked us on the boards so we knew they were thinking they could do that again.” -- Casper College point guard Jalen Harris.

Casper College point guard Jalen Harris drives to the basket in the T-Birds' game against Gillette College on Feb. 19 at Swede Erickson Thunderbird Gym in Casper.