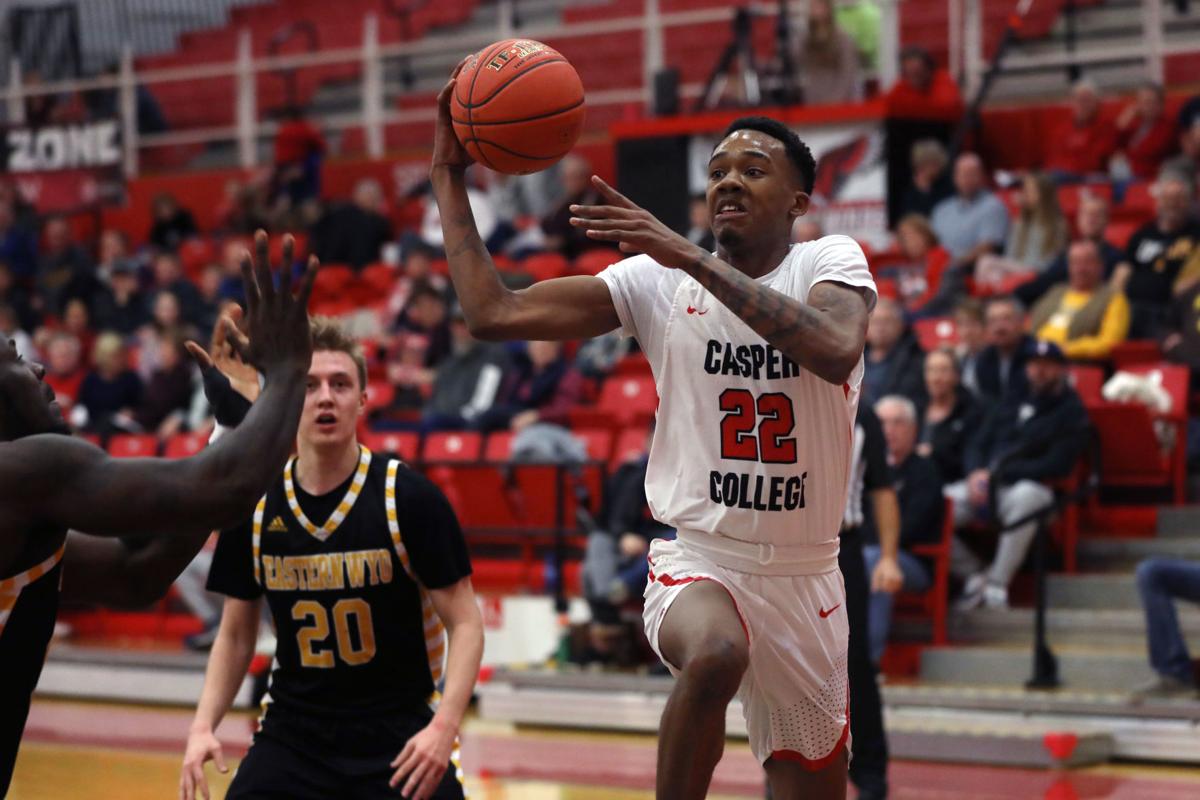 Casper College's Traizon Byrd drives to the basket in the T-Birds' game against Eastern Wyoming College on Jan. 22 at Swede Erickson Thunderbird Gym. 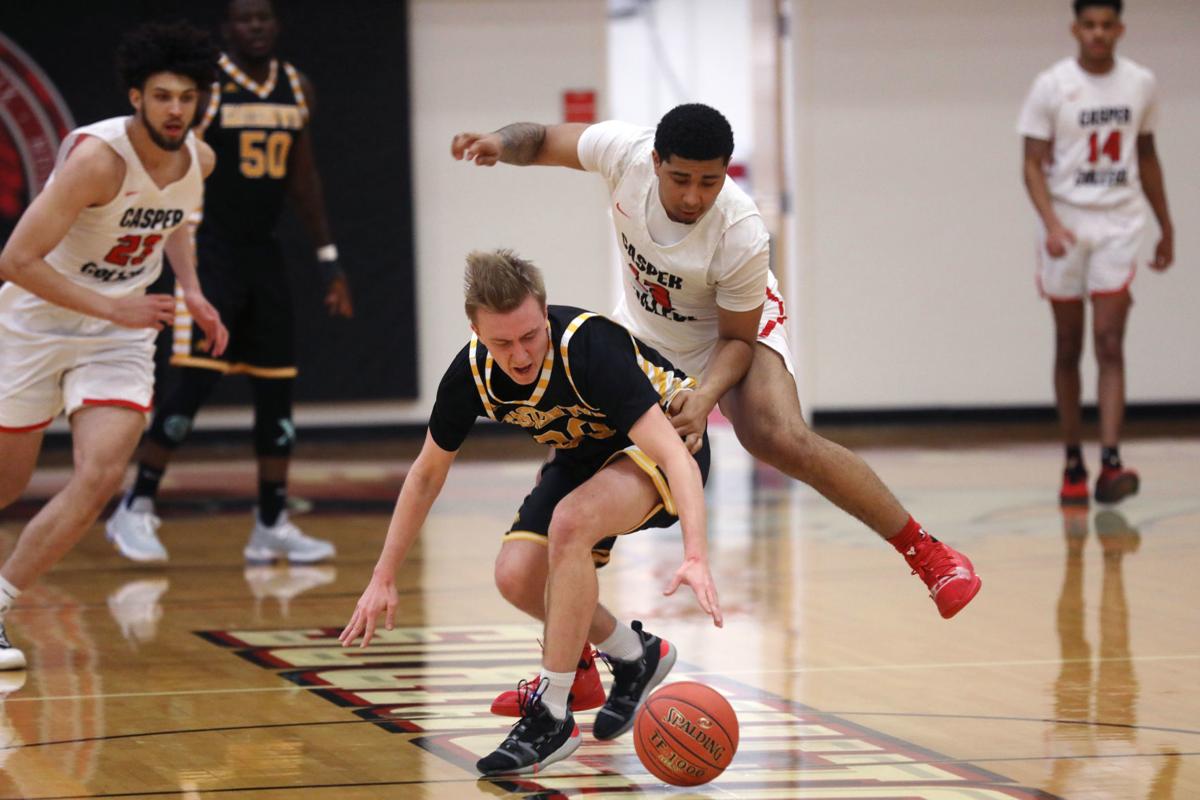 Heading into his second season as the Casper College men’s head basketball coach, Shaun Gutting just wants to be on the court with his team. Exactly when that will happen, though, remains uncertain.

Not only did the ongoing coronavirus pandemic keep returning players from being on campus, but it didn’t allow incoming freshmen or transfers to even come for a visit. Adding to the uncertainty was the recent decision to cut the sports programs at both Gillette College and Sheridan College, both of which played in Region IX along with Casper College. And then there was Thursday’s announcement by the National Junior College Athletic Association that all NJCAA sports likely won’t be allowed to start until the spring of 2021.

It all adds up to a lot of uncertainty.

“I just miss the game,” Gutting said Thursday, “and I know from talking to all the guys that they feel the same way. For a lot of these guys basketball is an escape from everything that is going on in the world.”

Despite all the uncertainty, Gutting and assistant coach Lester Stewart are doing what they can to prepare for the upcoming season, whether it starts in October as planned or is pushed back to the spring.

The Thunderbirds return five players from last year’s team that finished 25-6 and was ranked in the NJCAA Top 25 for most of the season. A 112-108 overtime loss to Western Nebraska Community College in the quarterfinals of the Region IX Tournament ended their hopes of defending their Region IX title.

With an eye on returning to the top of the league, the T-Birds are bringing in three transfers and five freshmen.

“I’m pretty happy with what we pulled off,” Gutting admitted. “Lester worked really hard at it really early to try to get in with a lot of these kids, especially the freshman. He did a great job building relationships with those guys so that when it came time they were willing to do it. And that made my job a lot easier.”

“Sam and Donavan and Traizon are the three that I expect to take really big strides this year,” Gutting said. “They have to be more reliable and still have to produce.”

Filling in around those five will be three sophomores – 6-3 Trey Boston from Triton College, 6-5 Dion Ford from Lake Region State College and 6-3 Anthony Davis from Williston State College. Boston and Davis both averaged around 12 points per game last season while Ford averaged a double-double (21 points, 12 rebounds).

“Getting Trey was big for us because he knows the position and he can do a little bit of everything,” Gutting said. “He will really bring the group around because he can help Dathan do what he does so well and it puts Donavan off the ball a little bit more so he can use his athleticism and length.

“And Dion is a workhorse. He’s an undersized 4-man who finishes around the rim. I look for him to be really consistent with his effort. I don’t expect him to average a double-double, but he’ll be able to impact the league right away.”

Gutting called the incoming class “a pretty talented group” before offering more on each player.

Gutting believes the T-Birds’ success in recent years – they won the Region IX title two years ago when they went 32-3 and finished No. 6 in the nation, have won at least 20 games the past 11 seasons and sent nine players to Division I the past two years – was a major factor in being able to recruit players despite not having them visit campus.

“Nationally, I think our name is becoming more of a staple,” he said. “And that comes from their high school and AAU coaches. When it looks like players might have to go the junior college route then we become an appealing option. We have coaches out there that can vouch for us and vouch for the program.

“And whenever you can say that you’ve consistently sent multiple guys to Division I it obviously helps. These guys know that if they don’t go Division I from here it’s not for a lack of exposure.”

When the players arrive on campus and when the season starts is still up in the air. When they do, though, Gutting and Stewart will definitely be ready.

UP IN THE AIR: The upcoming junior college basketball season may not start until the spring because of COVID-19.

RELOADING: The T-Birds have five returning players and have signed three transfers and five freshmen for the upcoming season.

HE SAID IT: "For a lot of these guys basketball is an escape from everything that is going on in the world.” -- Casper College head coach Shaun Gutting.

NJCAA recommends sports competitions be moved to spring of 2021

The cuts to athletics and other programs at the colleges include 16 layoffs.

Casper College's Traizon Byrd drives to the basket in the T-Birds' game against Eastern Wyoming College on Jan. 22 at Swede Erickson Thunderbird Gym.