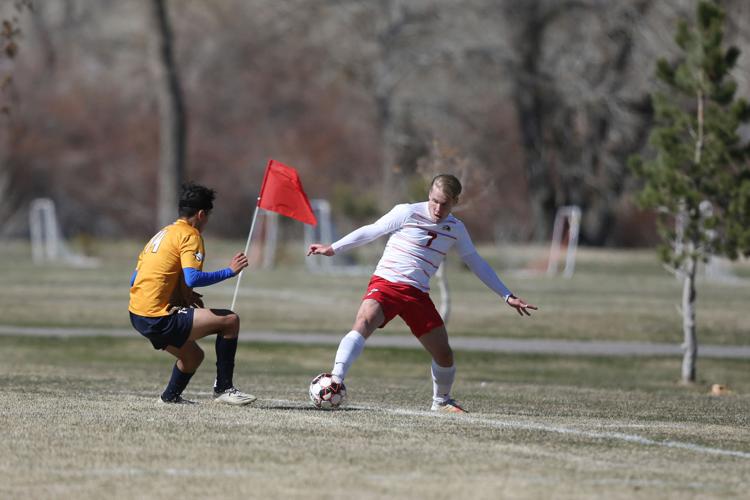 Casper College's Jesper Van Halderen controls the ball from going out of bounds in the T-Birds' game against Western Nebraska Community College on April 28, 2021 in Casper. 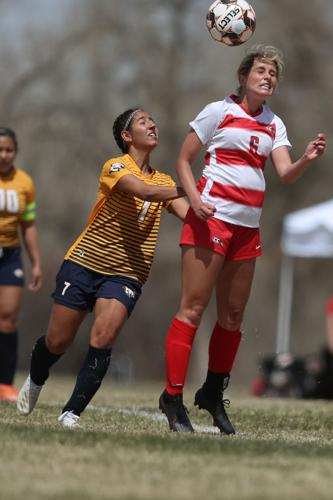 Casper College's Sophia Henely jumps to head the ball in the T-Birds' game against Western Nebraska Community College on April 28, 2021 in Casper.

Entering their third season of competition, the Casper College soccer teams have already had to deal with adversity. Their inaugural campaign was scheduled to kick off in the fall of 2020, but was pushed back to the following spring because of the pandemic. The Thunderbirds then opened their second season of competition last fall, just three months after the previous season ended.

Year No. 3 of Casper College soccer begins Thursday, with both the men’s and women’s teams in Nevada.

“I feel like there’s at least a sense of normalcy now,” men’s head coach Ben McArthur said. “We had a full camp and I think we’re ready to go.”

The men’s team will be tested early as the T-Birds open against Arizona Western, which is ranked No. 2 in the National Junior College Athletics Association preseason top-25, in North Las Vegas.

The T-Birds’ opener against last year’s NJCAA runner-up is one of five games on their schedule against ranked teams.

“I don’t know of another team in the country that is playing our schedule, I really don’t,” McArthur said. “We just feel that high level of competition is going to pay off for us when the time comes.”

Also on the Casper College schedule are No. 11 Western Texas College (Sept. 30), No. 12 Snow College (Aug. 27), No. 13 Laramie County Community College (Sept. 24) and No. 19 Eastern Florida State (Oct. 2). The T-Birds also face Utah State-Eastern, which, like Casper College, received votes in the preseason poll; and Otero Junior College, which ended The T-Birds’ first two seasons in the Region IX tournament.

With seven returning players, two transfers and 18 freshmen on the roster, the T-Birds believe they are ready to take the next step and qualify for the NJCAA Championships.

“I’m really excited for the team this year,” said third-year sophomore Jesper Van Halderen. “I feel like this year we are better than we were the first two years.”

The forward from the Netherlands had nine goals and five assists his first season, but was limited to just two games last fall because of an injury.

Van Halderen is the team’s lone returning striker, but he has support in the midfield with Riki Soto and Jayden Chudeu, both of whom found the back of the net last season for the T-Birds (10-6-1).

Sophomore Ewan Gordon returns at center back, where he was an all-region player last year.

“I think both Jesper and Ewan are going to have monster years for us,” McArthur said. “And Jayden didn’t have the freshman year he wanted so he took it upon himself to be better.”

Gordon, who hails from Australia, anchors a defense that will be instrumental in shutting down opponents while freshmen goalkeepers Caden Allaire (Kelly Walsh), Talon Luckie (Laramie) and Mads Huegel (Germany) get acclimated to the junior college game. Allaire is scheduled to start between the pipes on Thursday.

“I’m very impressed with our backline,” Gordon said. “Kota (Yamanashi) next to me will be really good and we’ve got good depth at our outside backs. We should be a solid unit.”

McArthur has been impressed with all three goalies in the preseason as well as three other rookies – forward Cole Venable from Worland, midfielder Hayden Hollinger from Kelly Walsh and defender Jules Foll from Belgium.

“Jules is a guy that is going to make an impact for us early and often,” McArthur offered. “Hayden is going to have a chance to play important minutes and Cole is putting himself in position to play for us.

“I like our freshman class, but they’ve got to be ready to step up. There’s not much time for a learning curve.”

“If we want to play with the big guys we’ve got to not only play ‘em but we’ve got to beat ‘em,” McArthur said. “So ready or not, here it comes.”

Gordon believes the T-Birds are up for the challenge.

“They might underestimate us a little bit,” he said, “so hopefully we can surprise them.”

The T-Birds surprised everyone but themselves last season, knocking off Region IX power Laramie County Community College and winning their first regional title before losing 1-0 to Seminole State College in the NJCAA Championships.

THURSDAY: The Casper College soccer teams begin their third seasons of competition in Nevada, with the women's team taking on Cochise College in Henderson and the men's team facing Arizona Western in North Las Vegas.

TOUGH SCHEDULE: The men's team opens against preseason No.. 2 Arizona Western and plays four other teams ranked in the preseason top 25.

HE SAID IT: “If we want to play with the big guys we’ve got to not only play ‘em but we’ve got to beat ‘em.” -- T-Birds' men's head coach Ben McArthur.

No. 20 Thunderbirds have just two games remaining in regular season.

Casper College men's soccer team falls one spot to No. 12 in NJCAA rankings

Casper College's Jesper Van Halderen controls the ball from going out of bounds in the T-Birds' game against Western Nebraska Community College on April 28, 2021 in Casper.

Casper College's Sophia Henely jumps to head the ball in the T-Birds' game against Western Nebraska Community College on April 28, 2021 in Casper.