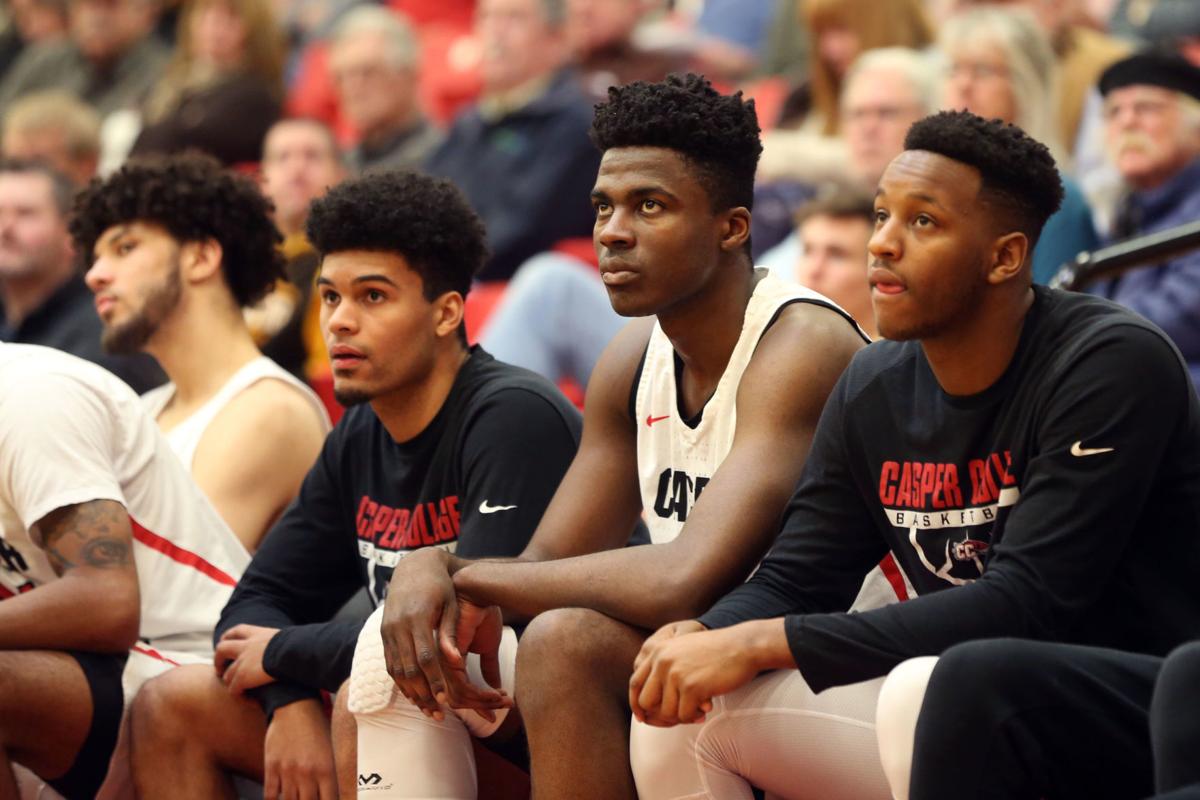 Casper College players (from left) Emmanuel N'Tula, Philip Pepple Jr. and Donavan Freeman watch from the bench as the T-Birds take on Sheridan College on Wednesday in Casper. 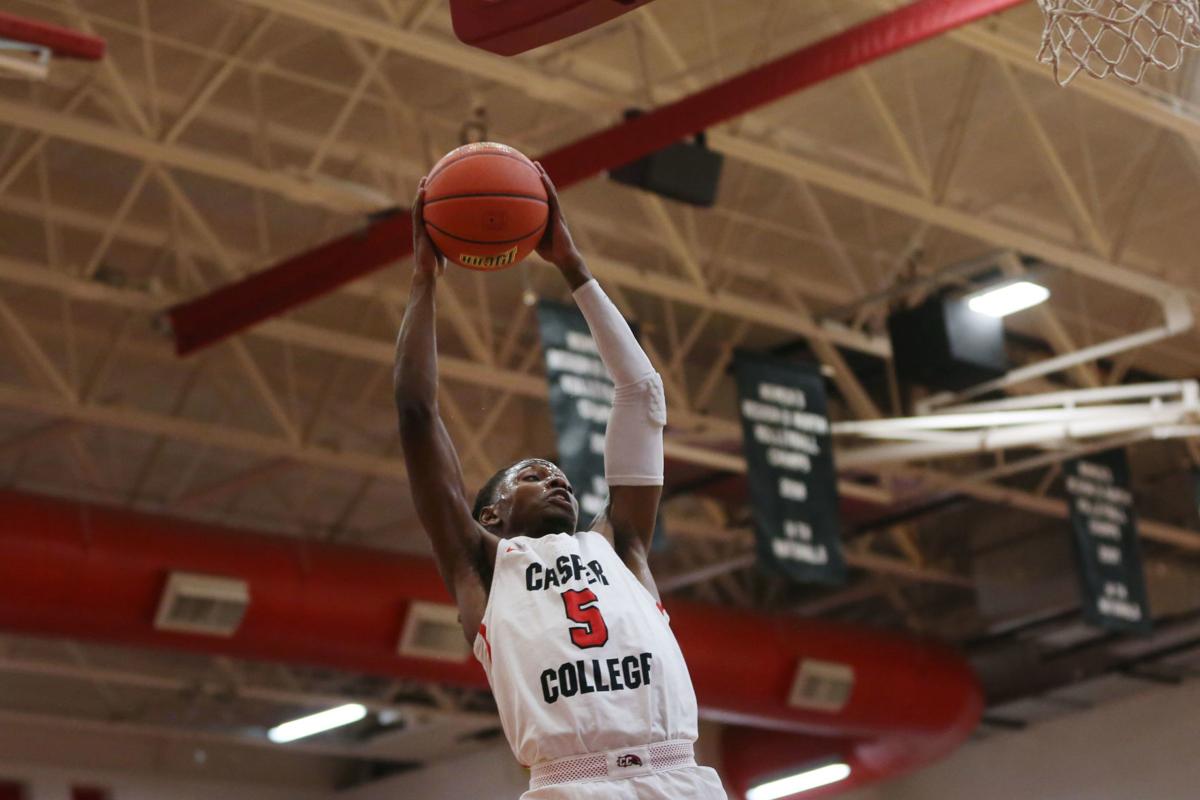 Casper College's Isaiah Banks soars in for a layup in the T-Birds' game against Sheridan College on Wednesday at Swede Erickson Thunderbird Gym in Casper. 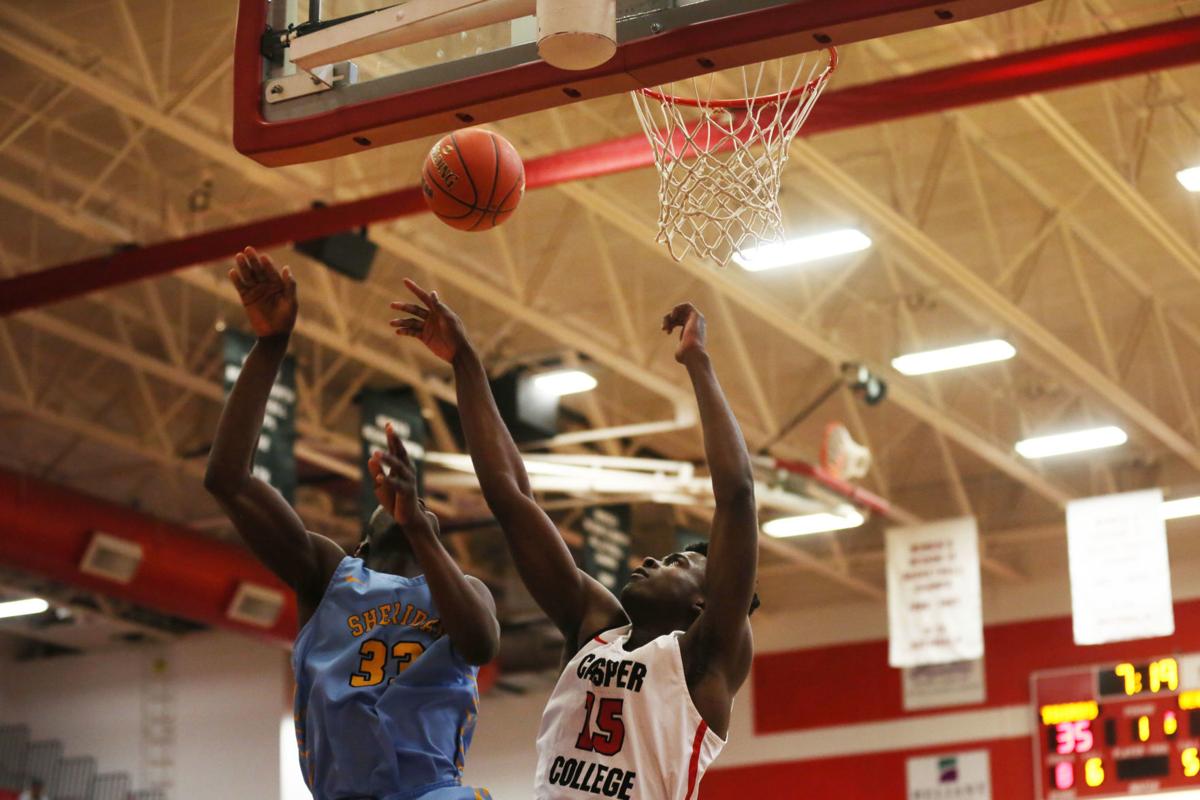 Casper College's Philip Pepple Jr. blocks a shot by Sheridan College's Abdul Shanunu in the first half of their game Wednesday at Swede Erickson Thunderbird Gym in Casper.

The T-Birds (16-2, 3-0) extended their winning streak to 10 games with a 111-103 home victory over Sheridan College on Wednesday, marking the seventh time in the past eight games they have topped the century mark. The Mustangs (17-2, 3-0), meanwhile, bring a nine-game winning streak to The Swede.

“I’m really looking forward to it because Western is a really good team,” Casper College sophomore point guard Jalen Harris said. “They’re ranked and we’re ranked so it’s going to be real competitive. It should be a good conference game.”

Wednesday, Harris had 30 points to lead five players in double figures. The T-Birds also out-rebounded Sheridan College 51-36 and made 44 of 69 field goals (55.7 percent) and were 14 of 28 from behind the arc. And, despite a gym-record 50-point performance from Generals guard JoVon McClanahan, they never trailed after taking a 9-6 lead.

Still, the T-Birds know they have plenty to work on in the practices leading up to Saturday. Sheridan College attempted 43 free throws on Wednesday.

“I think we have a lot of guys that can really score,” Casper College head coach Shaun Gutting said, “it’s just a matter of getting us to defend the right way consistently.

“It’s one where we have to be really locked in on the defensive end. We have to figure it out.”

The T-Birds built a 20-point lead on the first half, holding the Generals to 11-of-35 shooting (31.4 percent) as big men Philip Pepple Jr. (7) and Samuel Keita (3) combined for 10 blocks. Sheridan College made adjustments at halftime, however, as it shot 58.8 percent (20 of 34) and Pepple had just one blocked shot.

Gutting knows the rest of the T-Birds can’t expect their big men to always be there to correct their mistakes.

“Philip was great in the first half doing his role,” he said. “In the second half it got to a point where we were too reliant on having Sam or Philip protect the rim. Our guys got lazy guarding the ball and jumping to the ball. They just assumed, ‘Well, if I get beat one of our 6-11 erasers are going to pin it against the backboard.’ And that’s just not realistic to ask guys to do that every possession.”

Western Wyoming figures to be the best team Casper College has faced this season. The Mustangs’ only losses were on the road to Western Nebraska Community College and No. 20 Salt Lake Community College. The T-Birds beat both those teams earlier this season, but the two victories were by a combined five points.

Sophomore Manuel Ayol, a 6-foot-7 wing, leads the team in scoring at 17.4 points per game. Freshman forward Dayne Prim and Ayol are 1-2 in the conference in rebounding at 9.8 and 9.1 boards per game, respectively.

“We know that things aren’t going to be easy from here on out,” said Casper College freshman Traizon Byrd, who had a career-high 23 points against Sheridan College. “Honestly, I don’t think we played that well (Wednesday). We have to be ready to play harder.”

In Saturday’s earlier game, No. 22 Casper College will be looking to build off Wednesday’s 92-33 rout of Sheridan College.

The T-Birds (15-3, 2-1 Region IX North) led 38-13 at the half and put the game away in the third quarter, when they outscored the Generals 27-2. Freshman guard Natalia Otkhmezuri broke out of a mini-scoring slump with 18 points, 15 of which came in the first half, and sophomore Reka Soos came off the bench to score a season-high 18.

The T-Birds will be taking on a Western Wyoming team that is 3-14 overall and has lost 11 in a row.

No. 16 T-Birds pull away and guarantee at least share of Region IX North

T-Birds want to maintain momentum heading into the postseason.

The Natrona County senior became the first Thunderbird in program history by signing on Thursday.

The Casper College basketball teams did what they needed to do Saturday, celebrating homecoming by sweeping Northwest College at Swede Erickso…

Casper College players (from left) Emmanuel N'Tula, Philip Pepple Jr. and Donavan Freeman watch from the bench as the T-Birds take on Sheridan College on Wednesday in Casper.

Casper College's Isaiah Banks soars in for a layup in the T-Birds' game against Sheridan College on Wednesday at Swede Erickson Thunderbird Gym in Casper.

Casper College's Philip Pepple Jr. blocks a shot by Sheridan College's Abdul Shanunu in the first half of their game Wednesday at Swede Erickson Thunderbird Gym in Casper.