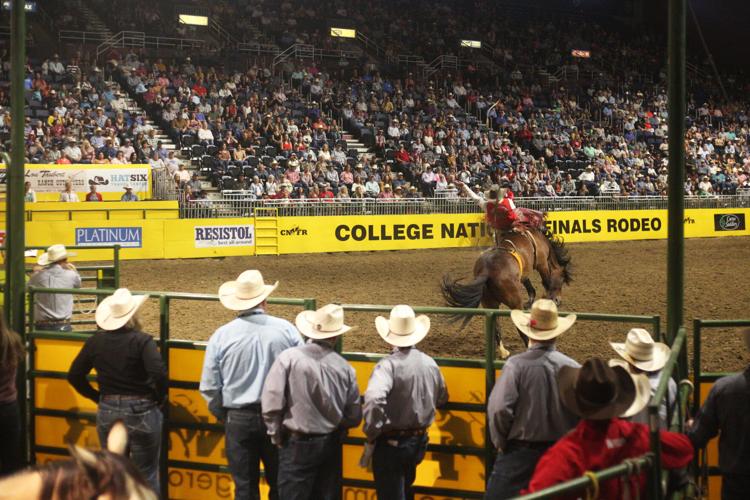 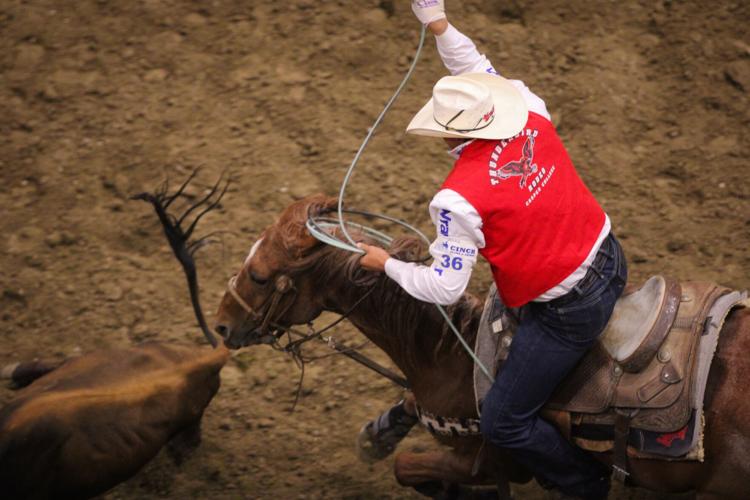 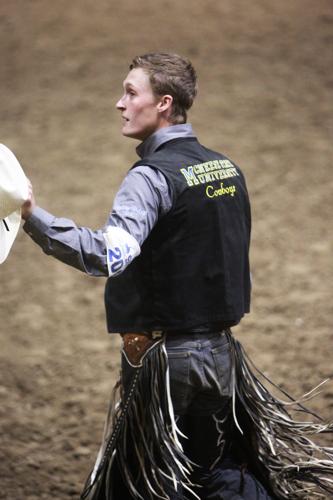 McNeese State's Ryder Sanford waves to the crowd after his ride on Triple V Rodeo's Swan Lake in the saddle bronc competition at the College National Finals Rodeo on Friday night at the Ford Wyoming Center. 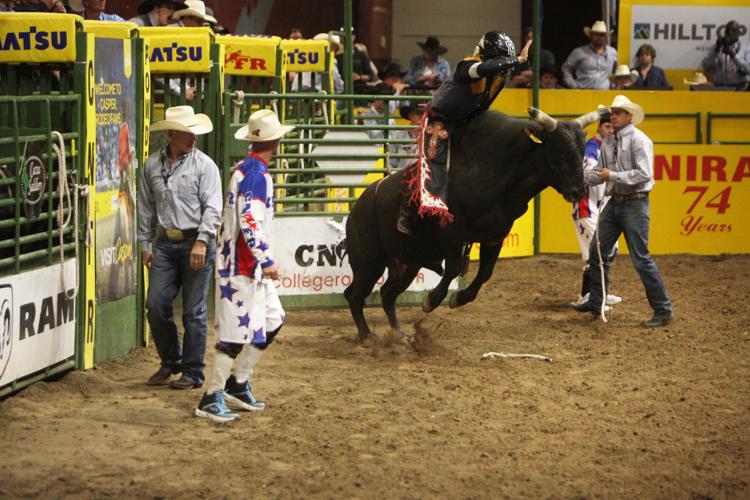 Montana State's Chase Runfola tries to hold on to Frontier Rodeo's May Day at the College National Finals Rodeo on Friday night at the Ford Wyoming Center. 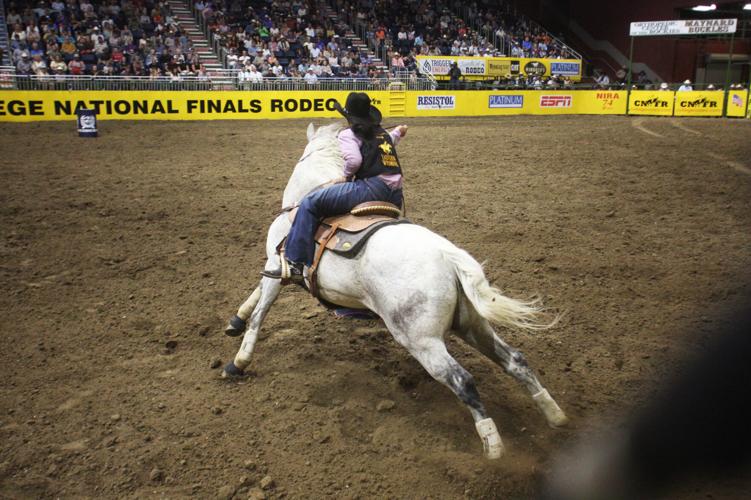 Eastern Wyoming College's Karissa Rayhill around the barrels at the College National Finals Rodeo on Friday night at the Ford Wyoming Center.

Friday night at the College National Finals Rodeo gives cowboys and cowgirls one final chance to move into the top 12 in the average and secure their spot in Saturday’s short go-round at the Ford Wyoming Center.

A number of contestants took advantage, with 31 of them earning a chance to compete in the short go thanks to their ropes or rides Friday. Three contestants — McNeese State saddle bronc rider Ryder Sanford, Texas A&M-Commerce breakaway roper Bryana Lehrmann and Sam Houston State goat tyer Mersadie Martin — jumped to the top of the leader board and five others moved into the top three in their respective events.

Sanford, who won both of the first two go-rounds, scored 73.5 points on Triple V’s Swan Lake to keep his lead in the average. Sanford has 236.5 points on three head, followed by McNeese State teammate Shea Fournier with a 234.0.

“My mindset is always the same,” Sanford said. “Ride to the best of my ability and do what I’ve been training to do. I knew that horse was a little bit on the weaker side so I would have to get as much out of her as I could. I just went out there and gave it everything I had.”

Powell native Brody Wells, who competes for Tarleton State, is fifth in the average with a 221.0 after his 68.0-point ride.

As is usually the case, the most movement in the average came in breakaway roping, with five cowgirls doing what they needed to to lock down a spot in the short go.

Lehrmann took the lead in the average with a three-run time of 6.6 seconds after her 2.2-second run Friday. Southwestern Oklahoma State’s Alli Masters is second with a 7.1, followed by Tarleton State’s Sarah Angelone with a 7.3.

Cokeville native Kaylee Cornia, who competes for Idaho State, enters the short go 11th with an 8.6.

Martin posted a 5.9-second run to win the third go and move to the top of the average leader board with a three-run time of 18.6 seconds. She’ll head into the short go just ahead of Cal Poly-SLO teammates Aimee Davis and Sierra Spratt, who both have an 18.7.

Defending national champs Kellan Johnson and Carson Johnson of Casper College had their fastest run of the week — 5.0 seconds — to close the gap on leaders Mason Moore of Sam Houston State and Logan Moore of Wharton County Junior College. The Moore brothers have a three-run time of 18.0 seconds while the Johnson brothers have an 18.5.

“We had a little “ruh-roh” on our second run and came into this round a little longer than we wanted to,” Carson Johnson said. “So we wanted to make a good run and put some pressure on the team ahead of us.

“They know what they have to do,” he added, “but we’re definitely in striking distance. I mean, half a second, that’s the blink of an eye. It’s coming down to a one-header and we’re ready for it.”

“It was just a colt of Vold’s,” McGehee said of his ride. “I just really tried to get my calves into him and pick him up to make him kind of sit there and stall for the judges. And I think my game plan worked tonight.”

McGehee will be chasing defending national champ Cole Franks of Missouri Valley College, who has a 236.0. MVC teammate Ty Pope is third with a 233.5.

“It’s just surreal to even be here after the injuries I’ve been through,” McGehee said. “To fight and battle back and be in the position I’m in I’m just blessed by God. Good luck to Cole and all the other guys, but I’m going to be coming for ‘em.”

Defending national champ Gavin Soileau of McNeese State won the round with a 3.8-second run and moved to third in the average with a three-run time of 14.5 seconds. He trails Tarleton State’s Walt Arnold (13.2) and Missouri Valley College’s Tucker Alberts (13.7).

Texas A&M’s Victoria Procter finds herself second in the average thanks to her 14.34-second run Friday. Procter has a three-run time of 43.06 seconds, which puts her within striking distance of Southwestern Oklahoma State’s Sadie Wolaver and her total time of 42.72 seconds.

Tarleton State’s Brayden Roe jumped to third in the average with a time of 31.7 seconds on three runs. Panola College’s Kincade Henry leads with a 29.1, followed by Casper College’s Linkyn Petersek with a 30.9.

Rawley Johnson of Western Texas College became just the eighth rider to make it to the 8-second buzzer for the week. The freshman had an 82-point ride on Frontier Rodeo’s Dark Knight to place third in the go-round and move to sixth in the average.

Through 90 bull rides after three go-rounds, there have been only 13 qualified rides.

Reece Monaco takes over for Walsh as both the UW football and basketball play-by-play announcer.

Pokes in the pros: Wyoming Cowboys sharpshooter Drake Jeffries expects to get an opportunity to play in the NBA, even if his name is not called in Thursday's draft.

It was a splashy move with a quiet beneficiary.

How much money waits for UCLA and USC in the Big Ten Conference?

It's about name, image and likeness, they said. It's about like-minded academic institutions. It's about growing opportunities to recruit.

McNeese State's Ryder Sanford waves to the crowd after his ride on Triple V Rodeo's Swan Lake in the saddle bronc competition at the College National Finals Rodeo on Friday night at the Ford Wyoming Center.

Montana State's Chase Runfola tries to hold on to Frontier Rodeo's May Day at the College National Finals Rodeo on Friday night at the Ford Wyoming Center.

Eastern Wyoming College's Karissa Rayhill around the barrels at the College National Finals Rodeo on Friday night at the Ford Wyoming Center.