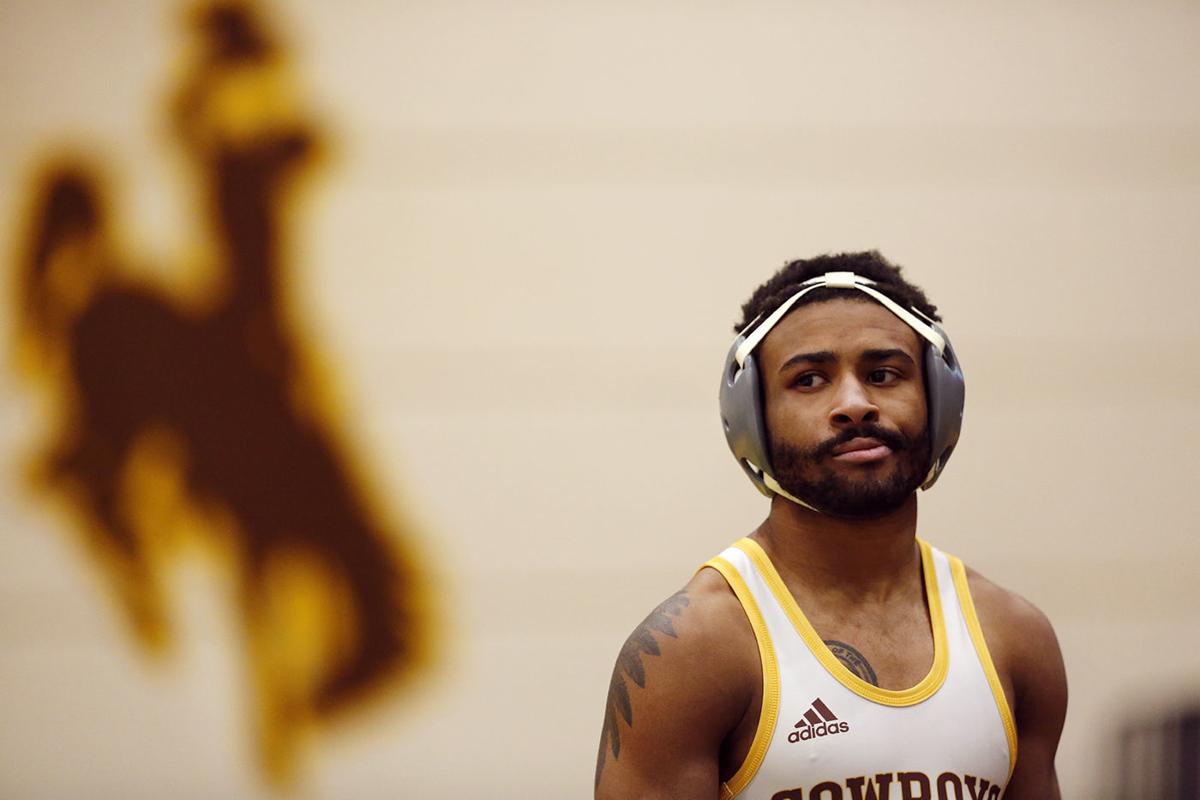 Wyoming's Montorie Bridges takes a moment while waiting for a call by the referees in his match against South Dakota State's Rylee Molitor on Feb. 10, 2019, at the UniWyo Sports Complex in Laramie. Bridges was one of five UW grapplers that had qualified for this year's NCAA Wrestling Championships before it was canceled in response to the coronavirus pandemic. 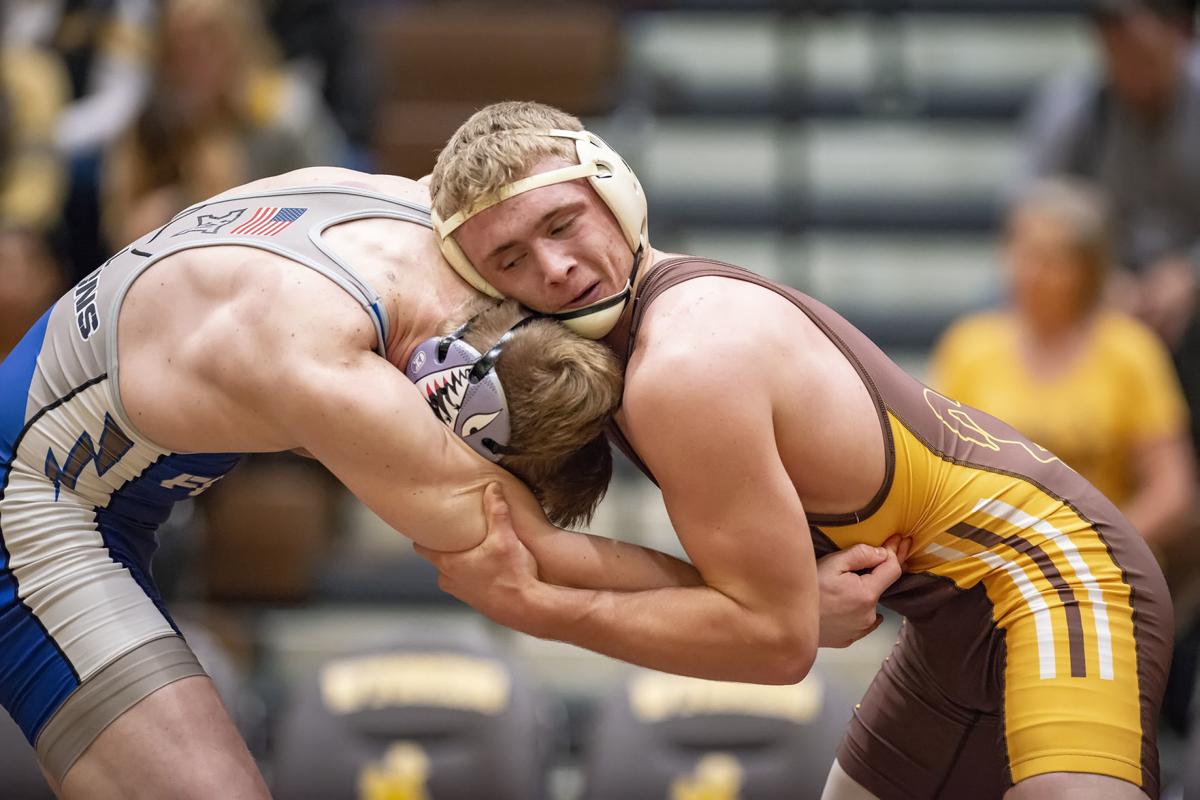 Sheridan native Hayden Hastings, competing against Air Force's Cody Surratt on Jan. 18, 2019 at the UniWyo Sports Complex in Laramie, had qualified for his second NCAA wrestling championships in the 174-pound weight class. 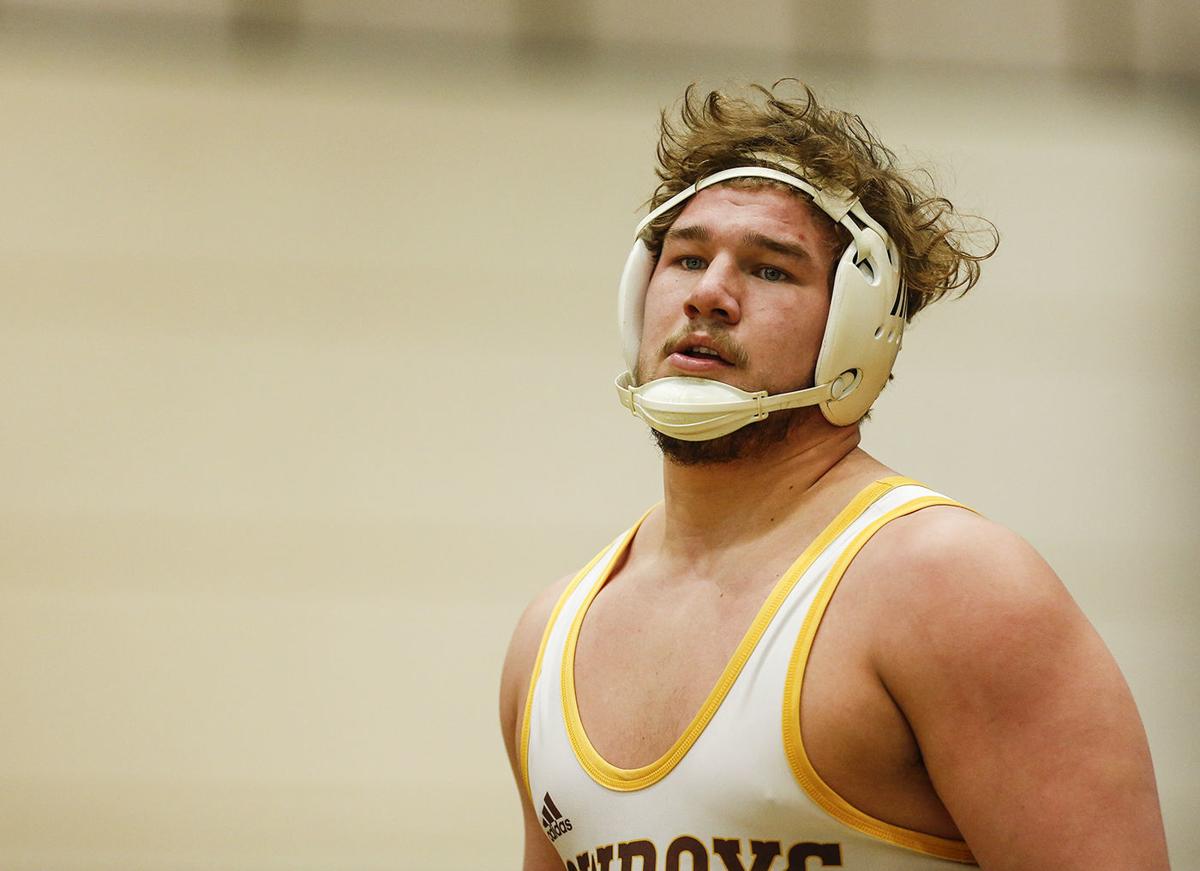 Heavyweight Brian Andrews won his weight class at the Big 12 championships last month to qualify for nationals for the second time.

LARAMIE — The disappointment seeped through some of their words. For others, their silence spoke volumes.

It’s been nearly a month since the season came to an abrupt end for Wyoming’s wrestling team. Just four days after the Cowboys wrapped up competition at the Big 12 Championships, UW coach Mark Branch told his grapplers during a team meeting it was all over.

For five of them, it was a week too early.

It was the first time for some, another shot for others. But Montorie Bridges, Hayden Hastings, Brian Andrews, Tate Samuelson and Stephen Buchanan all had the chance to reach the pinnacle of their sport. At least that’s what they thought once they had qualified for the NCAA Wrestling Championships, which were scheduled to be held in Minneapolis beginning March 19.

The week leading up to the NCAAs started with training, which was the last time any of them would take the mat this season. In an unprecedented move, the NCAA on March 12 canceled all of its remaining winter and spring championships in response to the coronavirus outbreak.

Bridges and Hastings first saw the NCAA’s announcement come across their Twitter feeds, so they already knew what Branch wanted to discuss when he sent out a mass text calling for a team meeting that afternoon. The utter disbelief of what was happening, though, still took some time to sink in.

“Obviously I was upset, but it was just … I didn’t know how to react just because of the situation,” Bridges said. “It was obviously something that was affecting the entire population, so it was like who should I be mad at for the NCAA wanting to take proper precaution? So I think for me, it was just more like I’m in shock. I didn’t really know how to react other than being upset but not knowing who to be upset with.”

Bridges and Hastings were the only ones who were willing to talk about it. Andrews, the only one among the group to win a Big 12 championship this season, and Buchanan did not respond to multiple interview requests from the Star-Tribune while Samuelson declined through a UW spokesman.

“It was just a tough pill to swallow,” said Hastings, a Sheridan native.

Andrews, UW’s heavyweight at 285 pounds, was set to make his second straight appearance at nationals after becoming just the third Cowboy to win a Big 12 title since UW joined the league in 2015. The same goes for Samuelson, who went 19-14 in the 184-pound weight class and received a second straight at-large bid. Competing on the national stage would’ve been a first for Buchanan, a 197-pound freshman from Loyal, Wisconsin, who compiled a 26-13 record to earn an at-large bid.

For Bridges, the most accomplished wrestler on UW’s roster, this year would’ve made for his third straight appearance at nationals after he turned in a third-place finish at the Big 12s, which automatically punched his ticket. He racked up a 32-6 record, leaving him two victories shy of 100 for his career — a feat that may have been attained this season if he could’ve wrestled in Minneapolis.

Bridges was also slated to be the No. 8 seed in the 133-pound weight class at nationals, an eerie coincidence that wasn’t lost on the former freshman All-American.

“I was looking back, and my seed was the same seed I got the year I was an All-American,” Bridges said. “I was like, ‘Oh, this is going to be fun.’”

Hastings also would’ve been competing at nationals for the second straight year, but this season’s sudden ending was particularly frustrating for the 174-pounder given the momentum he felt he’d built. His record wasn’t the best at 23-11, but Hastings pushed through an ankle sprain that nagged him throughout the latter part of the season and finished sixth at the Big 12 Championships before earning an at-large bid.

And even if he was a major underdog on paper, Hastings said he felt good about his first-round matchup against the No. 4 seed, Purdue’s Dylan Lydy, whom he defeated last season for the first ranked win of his career.

“The Big 12s, I kind of got my mojo back and was wrestling a lot better even in a couple of losses,” Hastings said. “The second day, I was one match away from being an automatic qualifier. So I was wrestling well and looking forward to continuing, going to the NCAAs and training hard in my training cycles. And getting it taken away was super frustrating because I felt good about where I was at on the back end.”

While Bridges and Hastings still try to come to grips with the proverbial rug being pulled out from under their season, they’re balancing the disappointment with perspective amid a public health pandemic that’s resulted in more than 1.3 million confirmed COVID-19 cases worldwide. The number in the United States has spiked to more than 364,000, according to the latest data from Johns Hopkins University, with more than 200 of those cases in Wyoming.

“We’ve never heard of any NCAA Tournament being canceled or anything like that, so to me, it’s so far out of your control that it’s hard to have a reaction to it,” Hastings said. “You’re upset that you weren’t able to compete and go for what you’ve been training for all offseason, but there’s nothing that you can look back on your season and say this is what I fix to make sure it doesn’t happen again. It’s just the NCAA taking precaution for helping-people purposes.”

All five of UW’s qualifiers will have at least one more chance to do it all again. The NCAA recently granted an extra year of eligibility to all student-athletes in spring sports who had their seasons canceled, though Bridges and Hastings felt the same should’ve been done for athletes in winter sports, which includes wrestling.

That didn’t happen since those sports completed the majority of their seasons before the cancellations, but Bridges, Hastings, Samuelson, Andrews and Buchanan are all underclassmen. Bridges and Andrews each have one year of eligibility left. Hastings and Samuelson will be juniors next season.

“I was just really excited, and then for it being kind of taken away like that, it was kind of weird not getting to compete,” Bridges said. “And then I started thinking about, well, I should be grateful that I have another year to be able to do that because the seniors won’t necessarily have that chance, so that’s been the way I’ve tried to look at it.”

UW, which hasn’t had a wrestler win an individual national championship since 1960, has moved classes online for the rest of the spring semester, so Hastings has gone back to Sheridan while Bridges is back home in Oklahoma. Both said they’re fitting in runs and workouts when they can and following the recommendations of doctors and health officials in order to do their part to keep a bad situation from getting worse.

“Just take this serious with some type of self-isolation or self-quarantine. I know I’ve been doing it,” Bridges said. “It’s really hard … but I think making that sacrifice right now will pay off in the long run. And wash your hands.”

“My thoughts and prayers go out to all who are marginalized in the society,” athletic director Tom Burman tweeted Sunday night.

Analysis: Ranking the intrigue of each game on Wyoming's schedule

The Border War and a Power Five matchup are near the top of the list.

Roughly 80 athletes are expected back on campus Sunday as part of first phase.

Huskies replace Clemson on UW's non-conference slate for that season.

Wyoming's Montorie Bridges takes a moment while waiting for a call by the referees in his match against South Dakota State's Rylee Molitor on Feb. 10, 2019, at the UniWyo Sports Complex in Laramie. Bridges was one of five UW grapplers that had qualified for this year's NCAA Wrestling Championships before it was canceled in response to the coronavirus pandemic.

Sheridan native Hayden Hastings, competing against Air Force's Cody Surratt on Jan. 18, 2019 at the UniWyo Sports Complex in Laramie, had qualified for his second NCAA wrestling championships in the 174-pound weight class.

Heavyweight Brian Andrews won his weight class at the Big 12 championships last month to qualify for nationals for the second time.