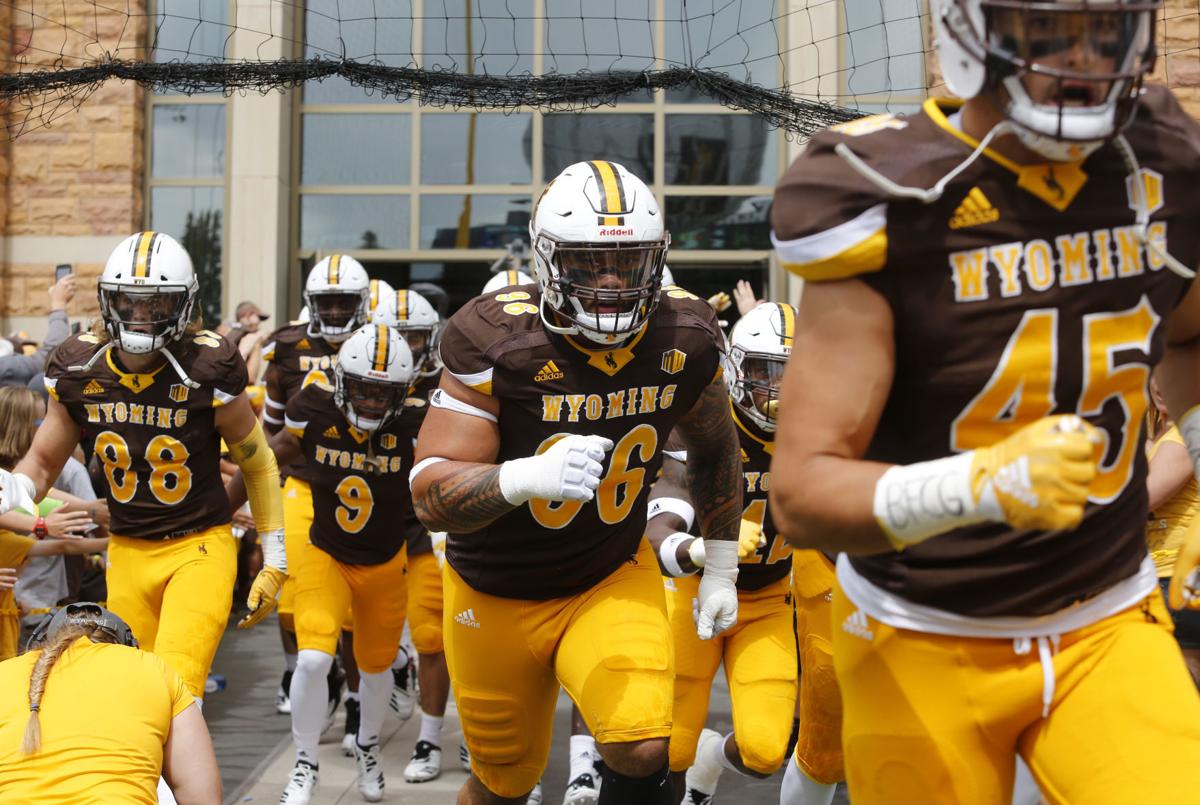 Wyoming's football players take the field for the Cowboys' game against Washington State on Sept. 1, 2018 at War Memorial Stadium in Laramie. 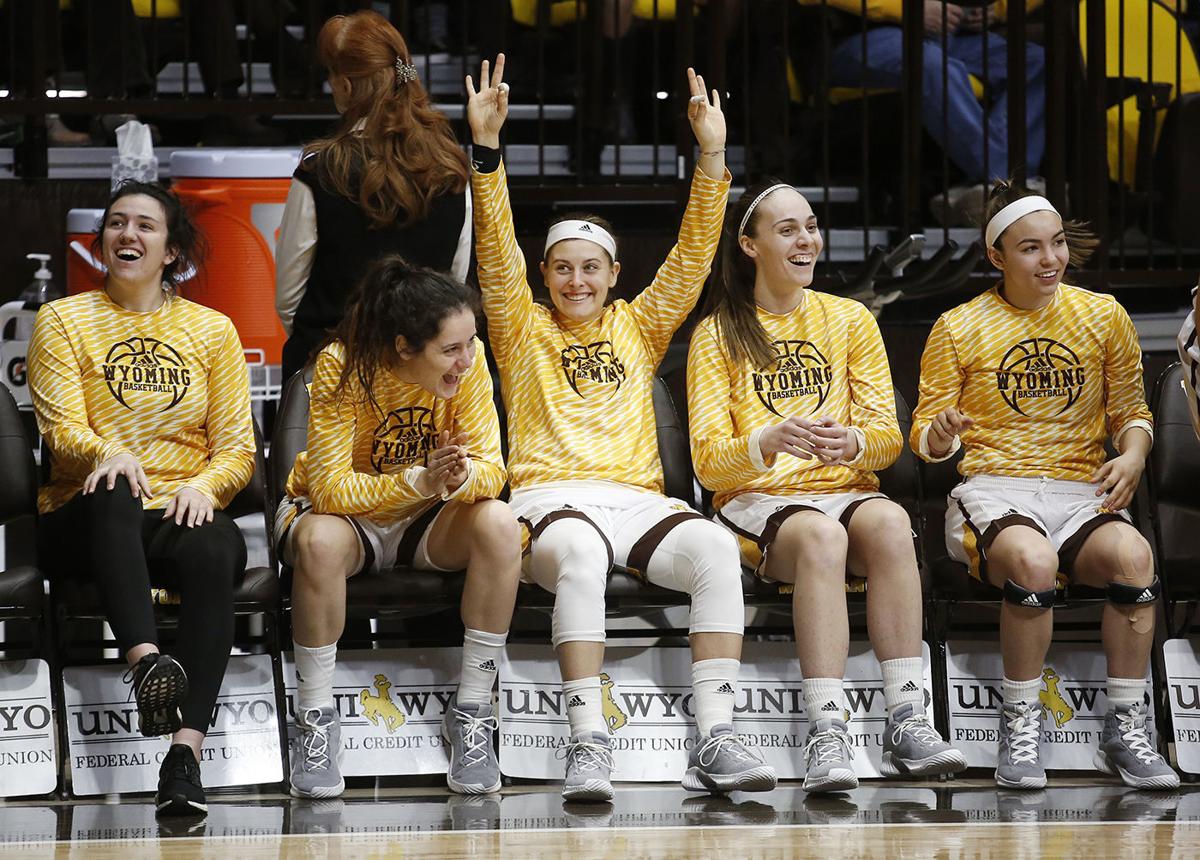 Members of the Wyoming women's basketball team react from the bench in the Cowgirls' game against UNLV on Jan. 5, 2019 at the Arena-Auditorium in Laramie.

LARAMIE — After years of resistance to the idea of student-athletes receiving any sort of compensation other than a scholarship, the NCAA is starting to change its tune.

On Wednesday, the NCAA’s Board of Governors — the top level of the organization’s governing hierarchy — took a major step toward allowing student-athletes to profit off their name, image and likeness (NIL) when it announced support for changes to bylaws that currently make it a violation. The announcement came after a working group recommended the changes during a meeting earlier in the week.

In a statement, the NCAA said the board’s recommendations will now go to each of the organization’s three divisions to consider appropriate rules changes in each tier. If adopted, the new rules would go into effect in 2021.

“The NCAA’s work to modernize name, image and likeness continues, and we plan to make these important changes on the original timeline, no later than January 2021,” Ohio State athletic director and working group co-chair Gene Smith said. “The board’s decision (Wednesday) provides further guidance to each division as they create and adopt appropriate rules changes.”

The board’s support is in stark contrast to the NCAA’s yearslong position that any outside compensation would threaten the amateur model of college athletics, but college sports’ governing body has felt increasing pressure to soften that stance, particularly when it comes to student-athletes being able to profit from third parties.

Though the bill isn’t scheduled to go into effect until 2023, California passed the Fair Pay to Play Act last year to make it legal for student-athletes at the state’s member institutions to profit from endorsements and sponsorships. Other states have followed suit by drawing up similar legislation.

And if those types of profits are eventually legalized, student-athletes should also tip their proverbial cap to the NBA’s G-League, which has started an initiative to give some of the nation’s elite high school basketball players a lucrative alternative to attending college for a year before entering the NBA Draft. Prolific Prep (California) star Jalen Green, ranked the nation’s top 2020 hoops prospect by ESPN, recently signed a deal that will reportedly pay him $500,000 to skip college and play on a developmental team that will also include fellow high schoolers Isaiah Todd and Daishen Nix, who were verbally committed to Michigan and UCLA, respectively, before deciding the money was too good to pass up.

Not every high school senior is going to be offered six figures to go straight from high school to the pros — Green, Todd and Nix were all McDonald’s All-Americans and five-star recruits — but the optics of losing potential college superstars to the professional ranks are terrible for the NCAA.

The NCAA men’s basketball tournament, annually the association’s largest source of revenue given its massive media rights deal with CBS and Turner, was set to bring in approximately $800 million from the television contract before the coronavirus outbreak ended this year’s tournament before it started. The NCAA wants as many viewers as possible to maintain the tournament’s popularity, so there’s little doubt they want as many high-profile players to promote the event every March.

Board of Governors moves toward allowing student-athlete compensation for endorsements and promotions: https://t.co/rzWzPt8KlI pic.twitter.com/bH9VoczjMr

But the NCAA has to make the college game more enticing to players who have other options, and allowing them to make money off their name, image and likeness is a step in that direction.

So what does it all mean for the University of Wyoming and its student-athletes?

First of all, it wouldn’t cost the school any money. Any compensation would have to come from third parties, meaning UW and every other member institution are still prohibited from providing a cent to their respective student-athletes outside of the cost of attendance.If Toyota of Laramie or Laramie GM Auto Center wanted to pay $5,000 to Sean Chambers, Xazavian Valladay or Hunter Maldonado to help promote their business in a commercial or on a billboard, they could do so without putting the athletes’ eligibility at risk. The only catch is athletes couldn’t use any logos and trademarks of the school and the Mountain West, though they’d be able to identify themselves by their sport and their school. Athletes would also be able to hire agents and other professionals to assist them with business opportunities.

And the NIL rules wouldn’t discriminate as it pertains to who could make money. While football and men’s basketball players would be the most likely to land sponsorships and endorsement deals given their universal popularity, if a women’s soccer player or a men’s golfer wanted to host a summer camp or monetize a social media account while still competing for UW, it would all be fair game (if you think those scenarios don’t sound like a big deal, imagine being former Central Florida football player Donald De La Haye, who was ruled ineligible in 2017 after refusing to stop profiting off his personal YouTube channel at the NCAA’s request).

Exactly what would the advisers hired by the student-athletes be able to do on their behalf? Is there a limit to the kind of businesses student-athletes could endorse? What’s to stop a business from moonlighting as a booster and trying to pay prospective players during the recruiting process? And what do the NCAA’s rules mean for state laws such as California’s that are likely to be less restrictive when it comes to the student-athletes’ earnings?

The path to adoption is likely to hit plenty of legal roadblocks between now and the end of the year. In an attempt to keep the playing field even, NCAA President Mark Emmert has already asked Congress to step in with a uniformed solution rather than each state having its own set of rules.

But it’s one the NCAA is finally loosening its grip on.

California's Fair Pay to Play Act could have trickle-down effect for schools like Wyoming.

Wyoming's football players take the field for the Cowboys' game against Washington State on Sept. 1, 2018 at War Memorial Stadium in Laramie.

Members of the Wyoming women's basketball team react from the bench in the Cowgirls' game against UNLV on Jan. 5, 2019 at the Arena-Auditorium in Laramie.