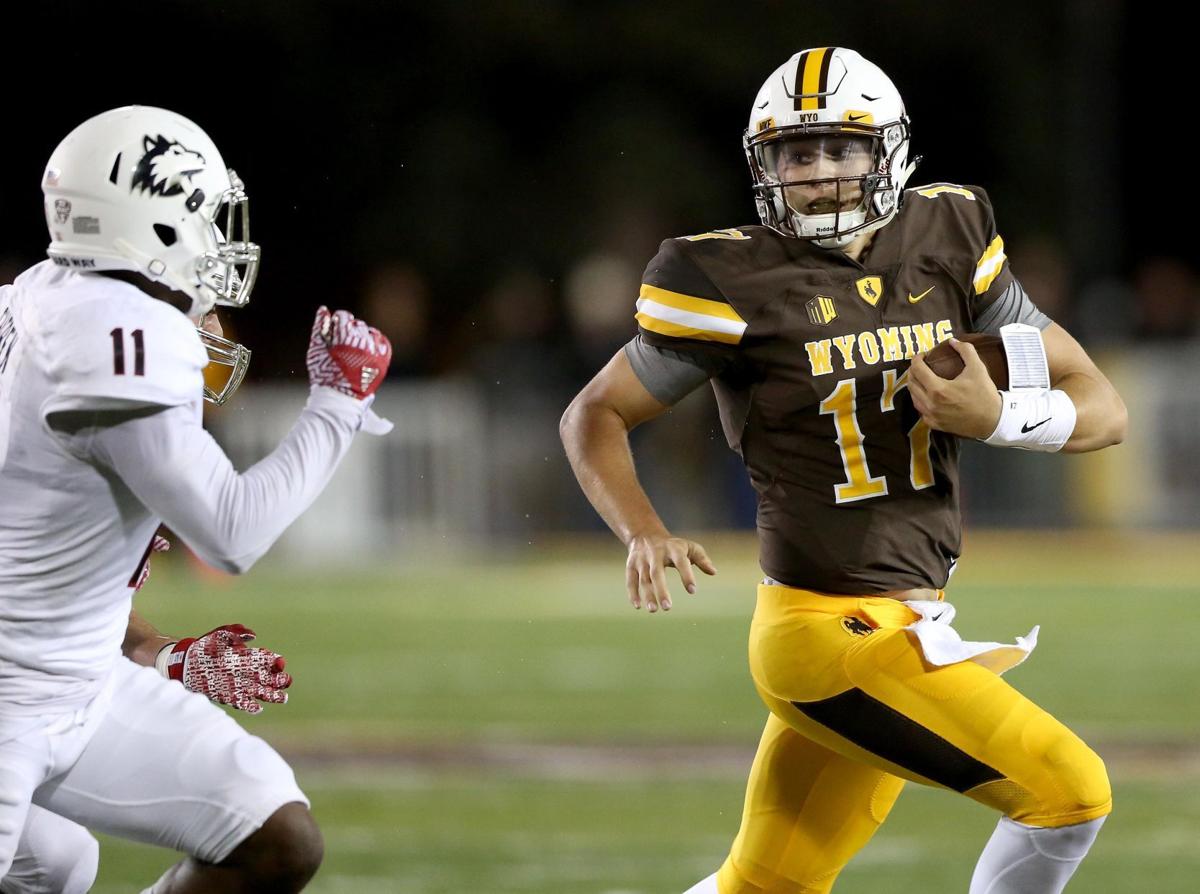 Wyoming quarterback Josh Allen runs while under pressure from Northern Illinois defenders during the Cowboys' season opener against Northern Illinois on Sept. 3, 2016, at War Memorial Stadium in Laramie. Allen's 7-yard touchdown in the third overtime gave UW a 40-34 victory. 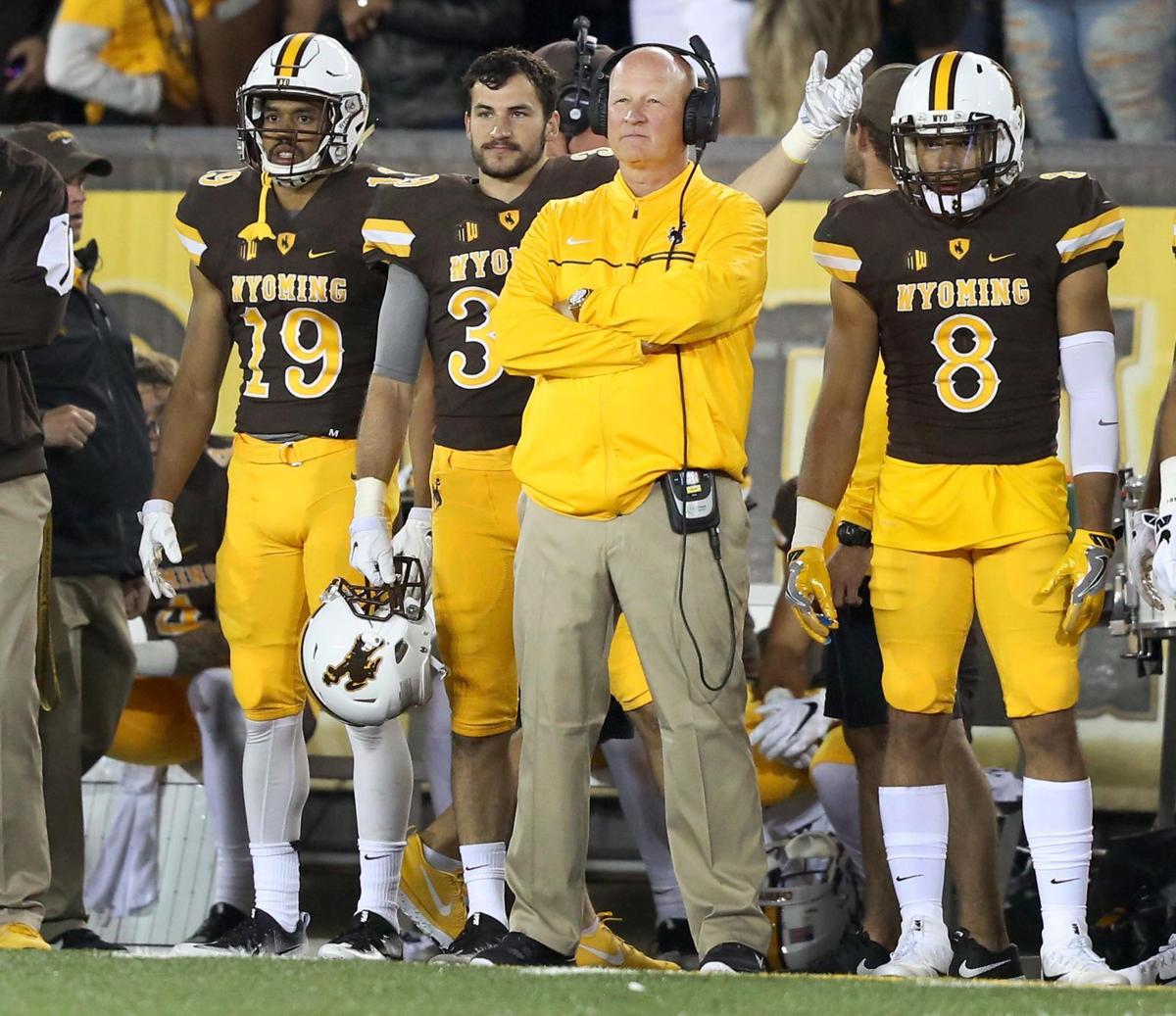 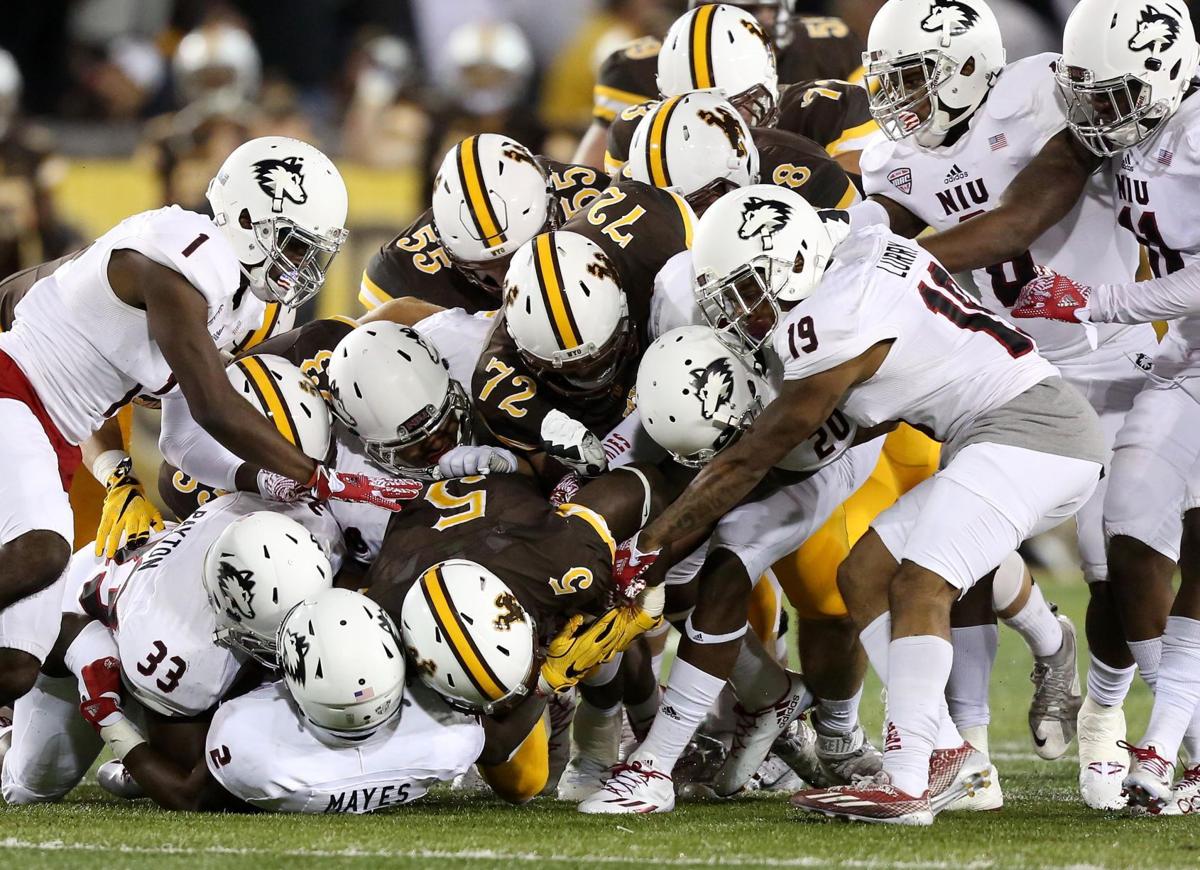 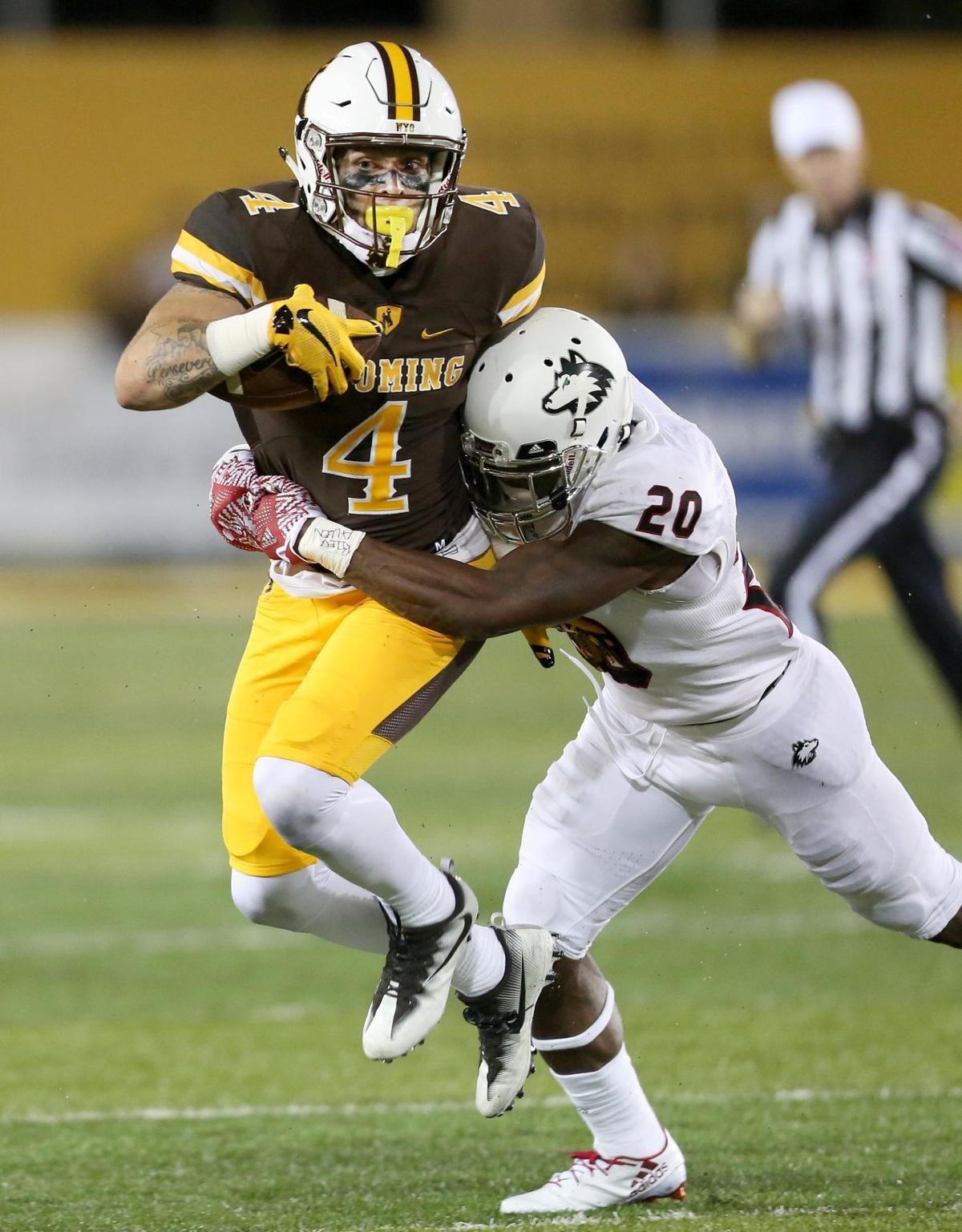 Wyoming’s Tanner Gentry runs for yardage against Northern Illinois during their game on Sept. 3, 2016 at War Memorial Stadium in Laramie.

Wyoming's Cooper Rothe makes a field goal to tie the game during the second quarter of the Cowboys' game against Northern Illinois on Sept. 3 at War Memorial Stadium in Laramie.

The future NFL franchise quarterback finished the Cowboys’ theatrical victory over Northern Illinois in the wee hours of Sept. 4, 2016, at the bottom of a dreamlike dog pile in waterlogged War Memorial Stadium.

Just over six hours after the scheduled kickoff time, Allen took a shotgun snap on a third-and-4, rolled right, slipped out of a sack, darted left, made two more tacklers miss while making a sharp cut back up the middle and dove headfirst into the north end zone.

Wyoming – after a 110-minute weather delay and three overtimes – defeated Northern Illinois 40-34 in a game that was supposed to start at 8:30 p.m. and finally ended at 2:34 a.m. Mountain Time.

Third overtime's the charm for Wyoming in defeat of Northern Illinois

“I can remember our students staying out there until who knows how late,” UW head coach Craig Bohl recalled. “When we ran out onto the field, there just seemed to be a different energy. Certainly, that was the first time that No. 17 really showed what he could do. He raised the bar.”

UW’s wild win set the tone for the roller coaster of a season.

The Cowboys pulled off other memorable home wins over San Diego State and Boise State on the way to the Mountain West Championship Game but also suffered some head-scratching losses to Eastern Michigan, UNLV and New Mexico.

Beating the Huskies — who had appeared in the Orange Bowl in 2012 and won another Mid-American Conference title in 2014 — was a big deal for Bohl after two tough years of rebuilding in Laramie.

“That was an awesome first-game experience for me,” said UW super senior safety Braden Smith, who was a true freshman in 2016. “To see Josh run over the goal line was a good experience, for sure.”

A torrential rain nearly washed the opportunity away. The teams were pulled off the field during pregame warmups as the biblical downpour began.

“The west side (of the stadium) is 50-some years old, so we were having flood issues coming down into their locker room, into the hallways,” UW athletics director Tom Burman said. “Speaking to their AD (Sean Frazier), we wanted to wait as long as we could. They had a flight issue. That plane had to go. They were able to work with their charter company to keep pushing it back.

“We were coming upon a point where it wasn’t so much about weather as it was about, can they get home the next day? When the plane leaves, it’s not going to be able to come back until Sunday night, and they were unwilling to hang around Laramie until Sunday night.”

During the delay, Burman did his best to keep both teams in the loop about when the game might resume or if it would be canceled. The Cowboys were staying loose in their indoor practice facility, while the Huskies were crammed in and around the small visiting locker room.

“We met as a group in the conference room a couple times. It got a little heated because they were a little bit frustrated we had access to the indoor and they were stuck in the hallway,” Burman said. “So I was trying to get them some access to the fieldhouse so they could stay loosened up.

“But they had cleats on. We couldn’t put them on that surface because we use that for track and field. So they had to take their gear off and walk around and do like a little mini walkthrough so they could stay loose.”

Ayden Eberhardt, now a super senior and the only current UW player besides Smith to experience the 2016 game, was redshirting during his true freshman season.

So what were the Cowboys doing to stay in the moment during the lengthy pause?

“Everyone’s different, whether it’s music or sitting there looking at the playbook going over every single play and what their assignment is,” Eberhardt said. “That’s pretty much what everyone did is kept their mind on football. You don’t get on your phone, you don’t look at any social media or Twitter or text or anything like that.

“It’s kind of tough because you’re getting ready for a game and you’ve got a bunch of adrenaline, but you have to be able to kind of reel that back in and kind of hold it down until the game starts again.”

Kenny Golladay, now a member of the New York Giants, was certainly ready when the game finally kicked off at 10:20 p.m. The dynamic wide receiver caught a 39-yard touchdown pass and ran for a 34-yard touchdown to give the Huskies a 13-3 lead in the second quarter. NIU missed the extra point after the second score, a prelude to a long night for both placekickers.

Brian Hill, who would finish his career as UW’s all-time leading rusher, answered with a 2-yard touchdown run. Tanner Gentry, currently a member of the Allen-led Buffalo Bills, gave the Pokes a 20-13 lead after making a 17-yard touchdown grab in the third quarter.

Golladay, who finished with 10 receptions for 144 yards and rushed for 82 yards, added a 27-yard touchdown reception to tie the score 20-20 midway through the third quarter.

“We knew we had a mismatch (with Golladay) and we kept going to it,” former NIU head coach Rod Carey said after the game. “He’s a special player, maybe one of the best to come through here in the end. He did what we expected him to do.”

UW’s offense continued to show off its NFL talent. Tight end Jacob Hollister, now a member of the Jacksonville Jaguars, caught a 2-yard touchdown pass from Allen late in the third quarter to give the Cowboys the lead back.

NIU quarterback Drew Hare, who finished with 329 yards passing and three touchdowns, connected with Shane Wimann for a 19-yard touchdown to tie the score at 27-all with 1:13 remaining in the fourth quarter.

Cooper Rothe appeared to win the game in regulation when his 48-yard field goal sailed through the uprights, but Carey had called a timeout. That iced the usually reliable UW placekicker, who sailed the redo wide right.

The seesaw action set up the overtime drama as East Coast college football fans tuned in over Sunday morning breakfast.

“That was my very first game. It was quite the introduction,” former Casper-Star Tribune reporter Brandon Foster said of his memorable debut on the UW football beat. “There were plenty of memorable games that season, but that’s up there as the craziest of all of them.”

In the first overtime, safety Andrew Wingard, now a member of the Jacksonville Jaguars, tackled Golladay at the 2-yard line to prevent a touchdown. Then linebacker Logan Wilson — a redshirt freshman from Natrona County High who is now a starter on the Cincinnati Bengals — recovered a fumbled snap to end NIU’s first drive.

After two Allen incompletions, Rothe missed a 37-yard field goal try that would have ended the game.

In the second overtime, Allen found senior receiver Jake Maulhardt for an 18-yard reception, and Hill gave the Cowboys the lead with a 5-yard touchdown run. NIU answered with a 1-yard touchdown run by Hare to tie the score 34-34.

“I hate to say it, I looked down at my watch after the second overtime and told the official, I said, ‘We’ve got to get this thing over,’” Bohl said. “I mean, I think I did the radio show at 3:15 in the morning. I don’t know how many people were listening, but Kevin McKinney did a great job of staying awake.”

Added McKinney: “I was dozing.”

In the third overtime, UW’s defense prevented NIU from getting a first down, and placekicker Christian Hagan missed a 38-yard attempt.

The Pokes only needed a field goal to win. Allen had a different closing statement in mind.

“Coach told me to be smart about it, and I probably should have thrown it away,” Allen said of his game-winning scramble. “I looked back and our guys were there (to block), cut it back and made a guy miss and found a hole and dived in. Felt great.”

The box score lists the final play as a 7-yard touchdown run by Allen. The roar of the crowd and the team running onto the field to bury Allen under a mound of brown and gold-clad humanity spoke to how special the moment was for the Cowboys.

“When we went back to play, I was shocked. The students stuck around, some other fans stuck around, and they witnessed one of the great finishes in the stadium’s history,” Burman said. “I think that play at the end of the game put Josh Allen on the map. That showed his competitive fire, that he was going to put a team on his back and carry them to a win.

“We had a never-say-die mentality and were able to overcome adversity that season. We also knew that morning, we’ve got a quarterback. That guy is a gamer.”

UW’s sports information staff, led by Tim Harkins and Nick Seeman, kept the press box open until Foster left at 5:56 a.m. Bohl decided to stick with the normal weekly routine and taped his coaches show later that morning instead of going to bed. The assistants returned to the football facility a few hours after the game to begin preparing for the fast-approaching road trip to Nebraska.

“It was a phenomenal win,” Bohl said in the moments after Allen zigzagged his way to the goal line. “We have steps to go, but we’re starting to see the stamp of the program we want to have.”

Five years later, the Cowboys will face the Huskies for the second meeting between the programs Saturday in DeKalb, Illinois.

UW hopes another win over NIU, minus a long delay and late-night drama, can lead to another unforgettable run this season.

DEKALB, Ill. – This Mountain West vs. Mid-American Conference matchup may be decided by which quarterback makes a play in the final minute.

Wyoming quarterback Josh Allen runs while under pressure from Northern Illinois defenders during the Cowboys' season opener against Northern Illinois on Sept. 3, 2016, at War Memorial Stadium in Laramie. Allen's 7-yard touchdown in the third overtime gave UW a 40-34 victory.

Wyoming’s Tanner Gentry runs for yardage against Northern Illinois during their game on Sept. 3, 2016 at War Memorial Stadium in Laramie.

Wyoming's Cooper Rothe makes a field goal to tie the game during the second quarter of the Cowboys' game against Northern Illinois on Sept. 3 at War Memorial Stadium in Laramie.