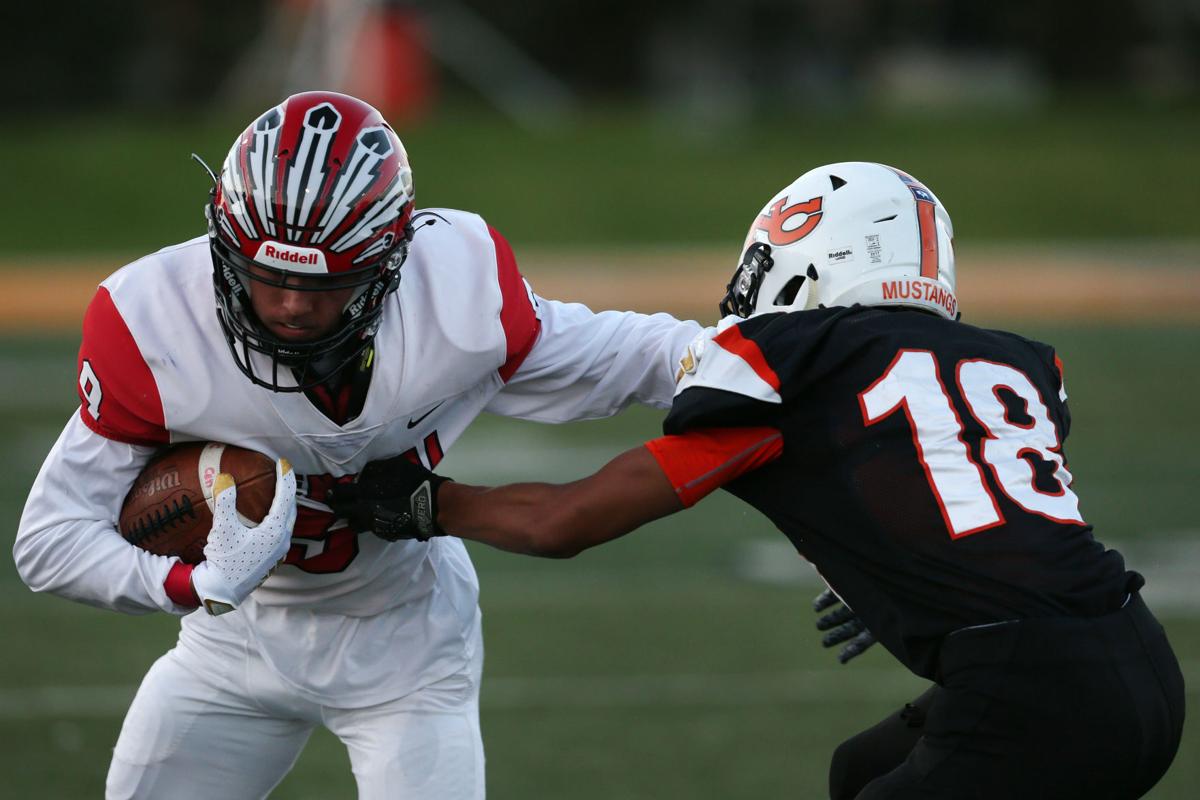 Cheyenne Central receiver Andrew Johnson tries to break away from Natrona County's Koby Kelly during their game Aug. 28 at Cheney Alumni Field in Casper. Johnson made public his verbal commitment to Wyoming on Saturday after committing to the Cowboys earlier in the week. 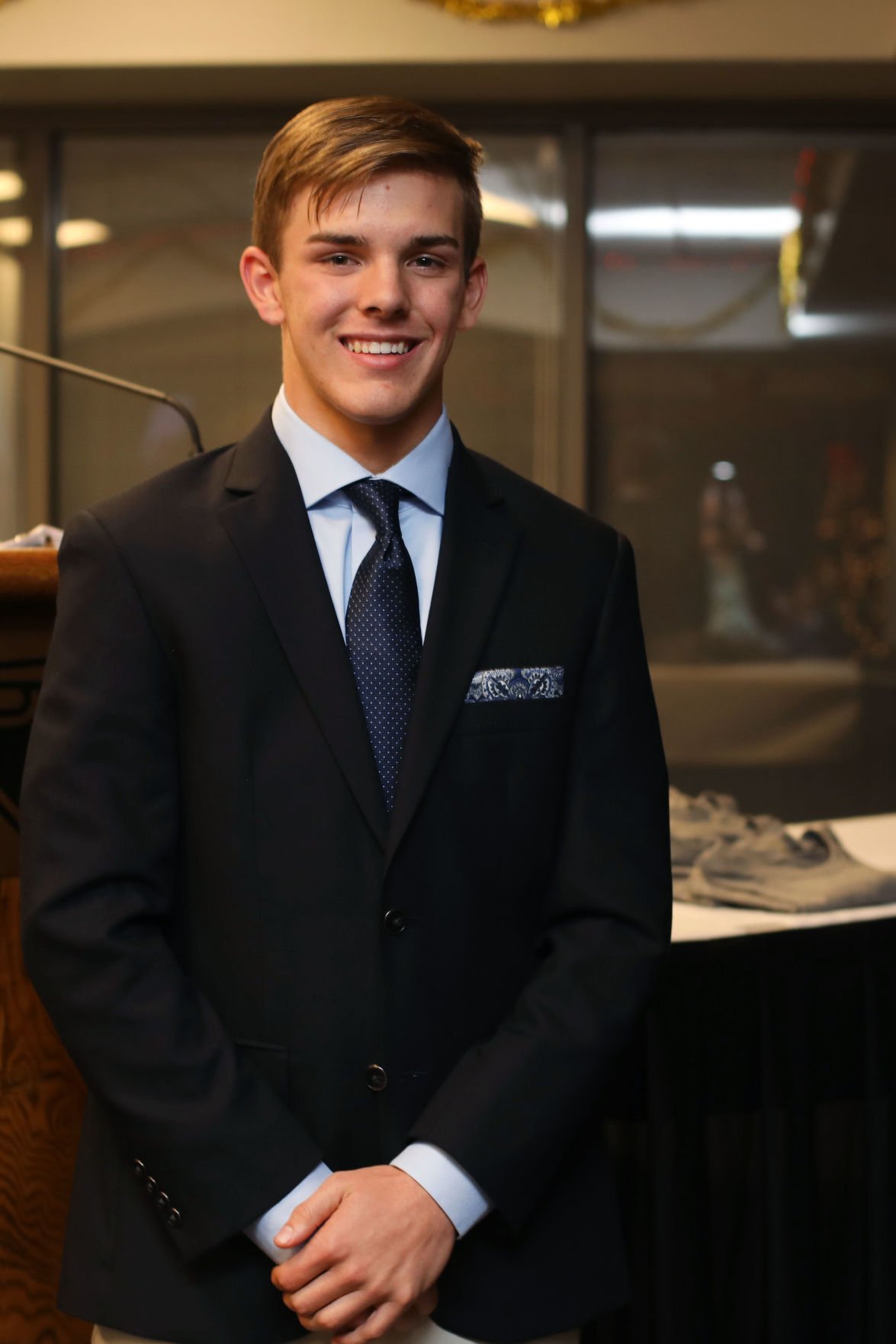 Cheyenne Central's Andrew Johnson stands for a photo during the Star-Tribune Super 25 banquet on Nov. 25, 2019 at the Casper Events Center.

He’s also the first in-state prospect to join the fold. In doing so, the Cheyenne Central standout is living out a dream.

Johnson took to Twitter on Saturday to publicly announce his verbal pledge to the Cowboys, but he actually committed Wednesday night after receiving his first Football Bowl Subdivision scholarship offer from UW coach Craig Bohl. The 6-foot-1, 182-pounder is the Cowboys’ sixth commitment in the current recruiting cycle.

“Wyoming had always been where I wanted to go, so when I got that offer, I knew it’s what I wanted to do,” Johnson told the Star-Tribune in a phone interview. “That’s when I committed.

“I had been in contact with them, so I knew obviously at some point that maybe I’d have a chance to play for them. When I got the offer, I was just very thankful. That’s really what I’ve obviously dreamed of my entire life.”

Very excited to announce my commitment to the University of Wyoming! I would like to thank @CoachCBohl, @Coach_SBMoore, @JaySawvel and @CoachABohl for helping me during the recruiting process! pic.twitter.com/bzdsJCif8B

Johnson, who has spent most of his life living in Cheyenne after being born in California, grew up attending UW games. His stepfather, Steve Zimmerman, played for the Cowboys in the 1990s.

Now Johnson will get his chance to suit up for the brown and gold once his prep career is over — one that’s seen the senior morph into one of the state’s top playmakers. A receiver and defensive back for the Indians, Johnson had 1,115 yards receiving and 17 touchdown receptions as a junior. The yardage total ranks third in single-season receiving yards in Wyoming high school football history, according to wyoming-football.com.

Johnson also pulled down seven interceptions last season en route to Class 4A all-state honors. He also earned a spot on the Star-Tribune’s Super 25, which annually recognizes the 25 best high school football players in the state. Heading into his final season at Central, Johnson was Wyoming’s lone representative on the watch list for the Sports Illustrated All-American team.

Before Friday’s 41-18 loss to Cheyenne East, Johnson led the Indians (6-1) with three interceptions and four pass break-ups. He also had caught 36 passes for 570 yards and four touchdowns.

UW has been recruiting Johnson strictly as a safety, a position Johnson is comfortable with. Depth issues forced Johnson to spend time at cornerback in previous seasons at Central, but he’s back at safety this fall.

“They’ve talked to me about safety and not much receiver,” Johnson said. “But I trust them and their judgment to put me where I’m best going to be able to best perform.”

Even if other FBS offers were to come down the road, Johnson said his college decision is final.

“(UW) is going to get a hometown kid that is going to come to work every single day, super coachable and just doing what’s best for the team at all times,” Johnson said. “I trust that they’re going to put me in the best spot possible to be successful, and I’m going to work my butt off to be everything they see in me.”

JJ Uphold is the Cowboys' fourth verbal pledge this month and fifth overall for the 2021 recruiting cycle.

LARAMIE -- Wyoming added a legacy prospect to its 2021 recruiting class Friday with a commitment from offensive lineman Jack Walsh.

Wroblewski is the Cowboys' eighth verbal pledge for the 2021 recruiting cycle.

Cheyenne Central receiver Andrew Johnson tries to break away from Natrona County's Koby Kelly during their game Aug. 28 at Cheney Alumni Field in Casper. Johnson made public his verbal commitment to Wyoming on Saturday after committing to the Cowboys earlier in the week.

Cheyenne Central's Andrew Johnson stands for a photo during the Star-Tribune Super 25 banquet on Nov. 25, 2019 at the Casper Events Center.