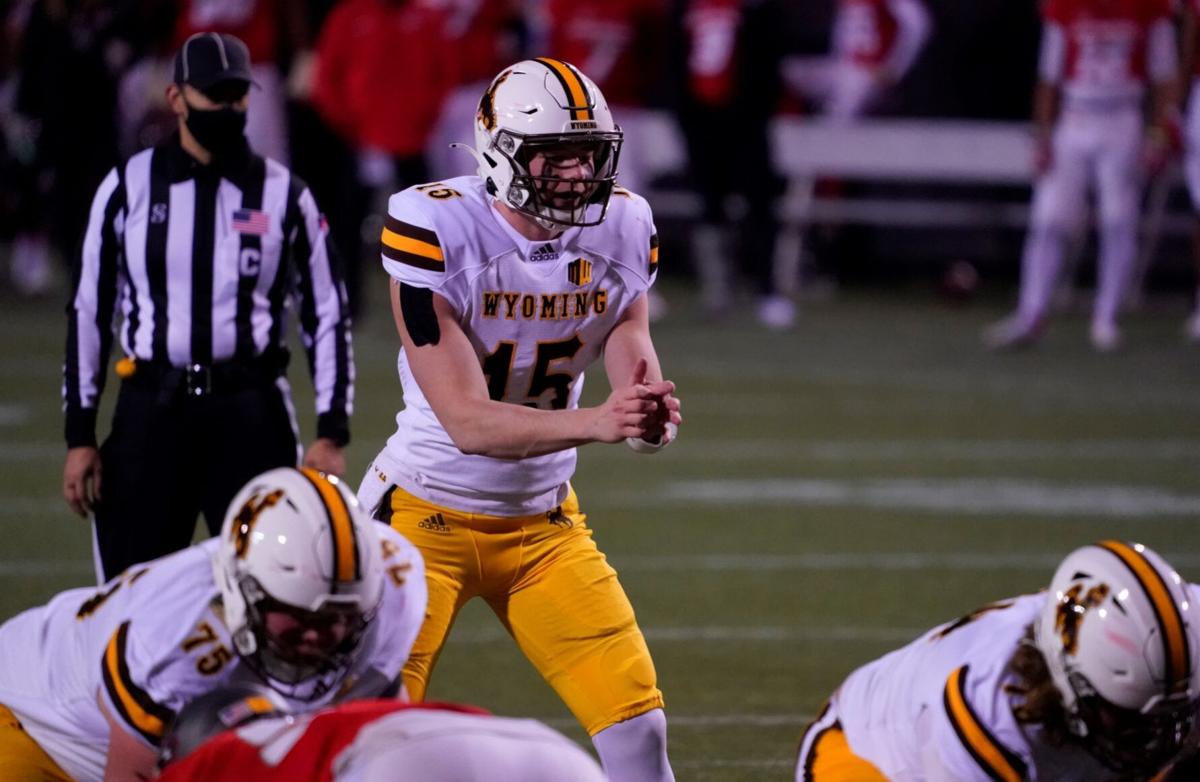 Wyoming quarterback Levi Williams waits for a snap against New Mexico during their game last season at Sam Boyd Stadium in Las Vegas. 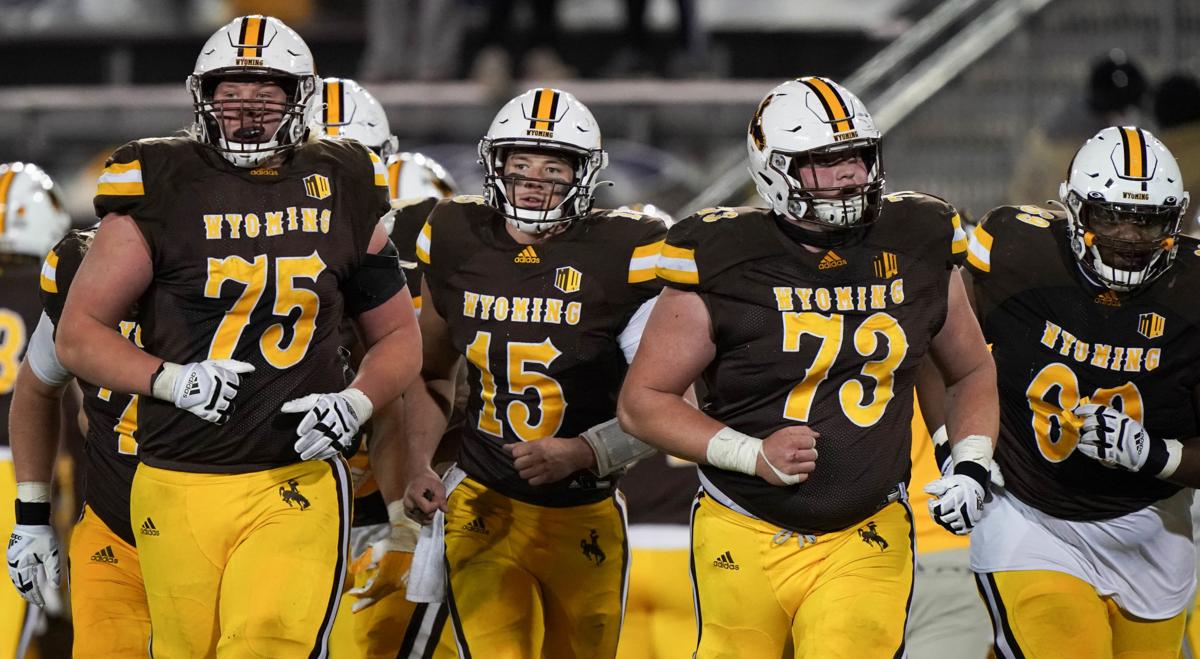 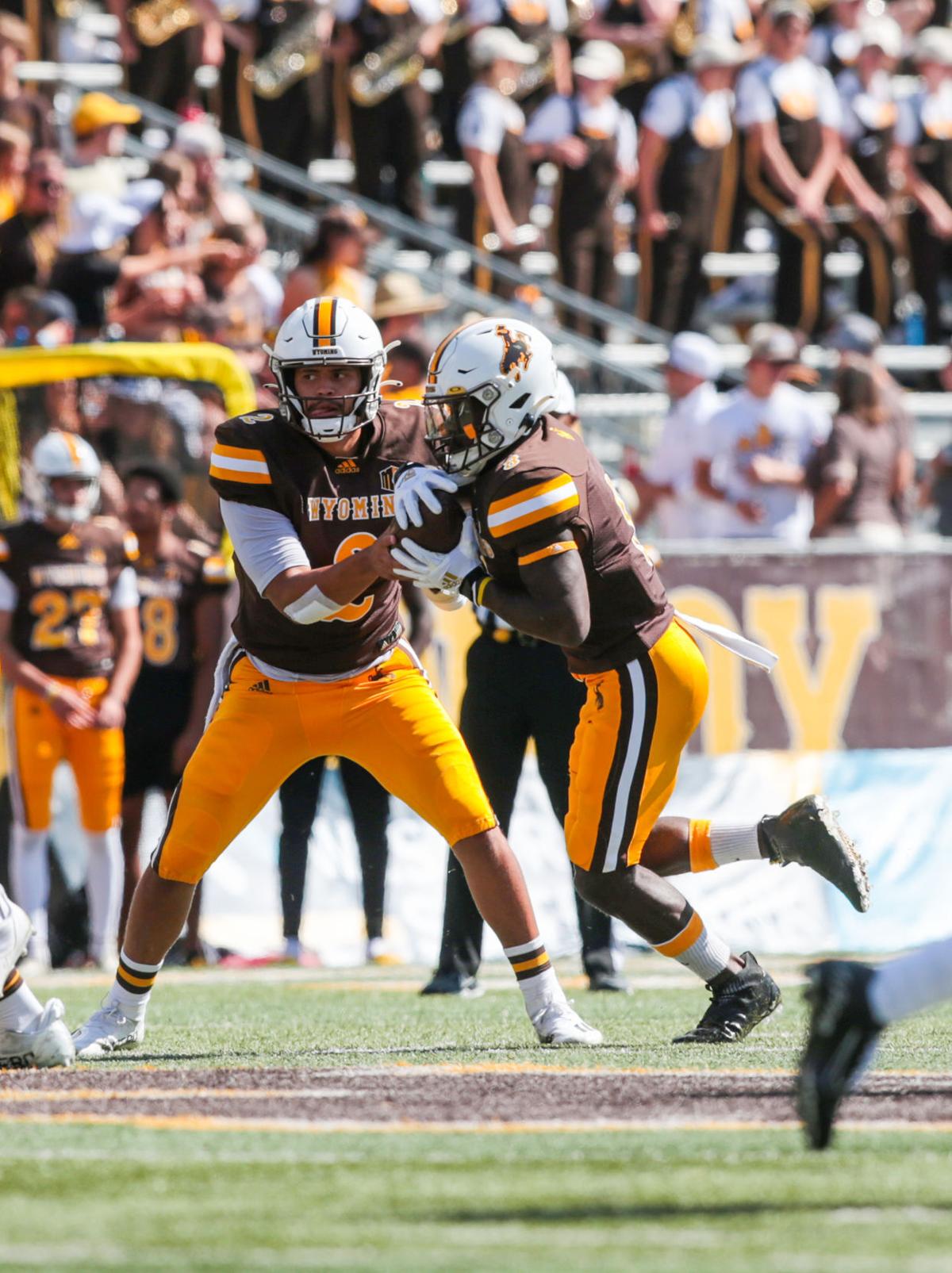 Wyoming quarterback Sean Chambers hands the ball off to Titus Swen during the Cowboys' game against Ball State on Sept. 18 at War Memorial Stadium in Laramie.

LARAMIE – The old football cliché goes: If you have two quarterbacks, you have none.

Wyoming didn’t get much of anything out of its top two quarterbacks during Saturday’s 17-0 loss to Fresno State.

Sean Chambers and Levi Williams combined to complete 30% of their passes for 143 yards with four interceptions, sending the crowd of 20,002 home to play a frustrating game of Monday morning quarterback.

Craig Bohl isn’t giving up on either player and has reopened the competition between Chambers and Williams for the starting spot entering UW’s homecoming game against New Mexico this Saturday at War Memorial Stadium (1:30 p.m., Stadium).

“I had both of those guys in my office today, had candid conversations with them, very transparent,” Bohl said during his Monday press conference. “Both of them are team guys and they both know we need to play better offense.

“We’ll name a starter probably right at the game time.”

Bohl said Chambers and Williams will split the first-team snaps evenly in practice.

The other quarterbacks on the roster – Utah transfer Jayden Clemons and redshirt freshmen Gavin Beerup and Hank Gibbs – will not be considered for the starting spot this week.

Chambers, the starter through the first six games of the season, was 8-for-23 passing for 111 yards with three interceptions and a lost fumble against the Bulldogs.

The offense has not scored since Chambers’ 10-yard touchdown pass to Isaiah Neyor with 15 seconds remaining in the first half of the Mountain West Conference opener at Air Force.

“I know the guy pretty well. He does respond,” offensive coordinator Tim Polasek said of his expectations of Chambers this week. “My biggest thing is pulling the trigger isn’t the issue. He’s getting through some progressions quick, so that’s not a confidence thing. But what is telling is that there’s just a little bit of edge about him in the pocket.

“We’ve got to continue to work hard with him to feel more comfortable about the looks that we’re giving him in practice and how they’re going to correlate to the game.”

Williams, who was 1-for-7 for 32 yards with an interception following Chambers’ benching in the fourth quarter against the Bulldogs, appeared in all six games with five starts in 2020 after Chambers suffered a season-ending injury on the third snap of the pandemic-shortened season.

In 10 career appearances over three seasons, Williams is 78-for-158 (49.4%) for 1,220 yards with four touchdowns and five interceptions. Three of those touchdowns and 234 yards of those yards came during his impressive start as a freshman in the Cowboys’ 2019 Arizona Bowl victory against Georgia State.

The 6-foot-5, 224-pound third-year sophomore from Canyon Lake, Texas, has also rushed for 281 yards and eight touchdowns during his career. Williams struggled last year while playing through an injury to his throwing shoulder, completing 49.6% of his passes for 877 yards (146.2 per game) with one touchdown and three interceptions.

“I take the same approach every week, as if I’m going to be the starter every single week, because you never know what may happen. Football is a crazy game,” Williams said before Monday’s practice. “So my preparation doesn’t change. I watch all the film that I can and take all the reps as serious as possible and get prepared to get thrown in there.

“I’m obviously excited to compete this week and put our team in the best position to win.”

In six starts this season, Chambers has completed 51% of his passes for 1,004 yards with six touchdowns and six interceptions. The 6-3, 225-pound junior from Kerman, California, led the Pokes to last-minute wins over Montana State, Northern Illinois and UConn during a 4-0 start.

But over the last three games, Chambers completed just 44.2% of his attempts and averaged 134.3 passing yards per game with two touchdowns, five interceptions and eight total turnovers.

UW ranks 110th in the FBS in passing yards (172.7 per game). Chambers ranks last in the MWC in passer rating (112.85) among the eight quarterbacks who have started at least 75% of the games this season.

“Whoever is going to be playing just needs to have confidence,” senior wide receiver Ayden Eberhardt said of this week’s battle between Chambers and Williams. “Just know that everyone else has the confidence in them to be able to move the ball, put points on the board and win the ballgame.”

Is there a chance Levi Williams gets the start Saturday against New Mexico?

Wyoming Cowboys shut out 17-0 by Fresno State, fall to 0-2 in Mountain West

Xazavian Valladay continues to climb Wyoming's career rushing list, but not as quickly as Cowboys envisioned

LARAMIE – Dejon Kelly admits with a laugh that his timing could have been better.

Josh Allen did everything but gain the longest yard.

Wyoming quarterback Levi Williams waits for a snap against New Mexico during their game last season at Sam Boyd Stadium in Las Vegas.

Wyoming quarterback Sean Chambers hands the ball off to Titus Swen during the Cowboys' game against Ball State on Sept. 18 at War Memorial Stadium in Laramie.