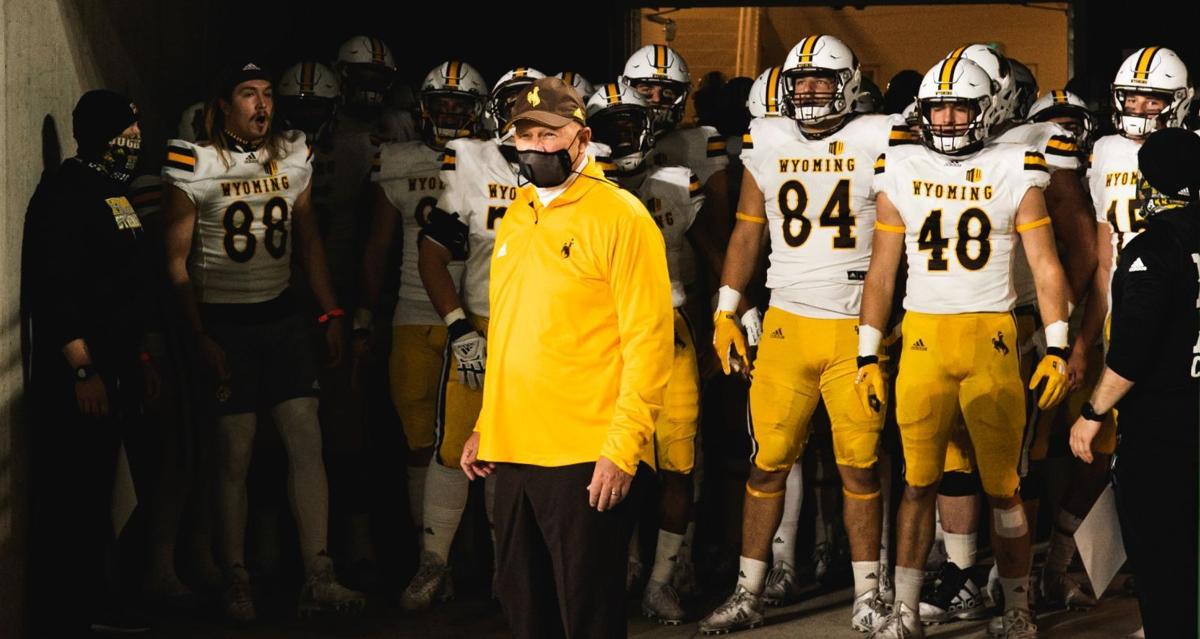 Wyoming coach Craig Bohl prepares to lead the Cowboys out of the tunnel before their game against Colorado State on Nov. 5, 2020, at Canvas Stadium in Fort Collins, Colo. 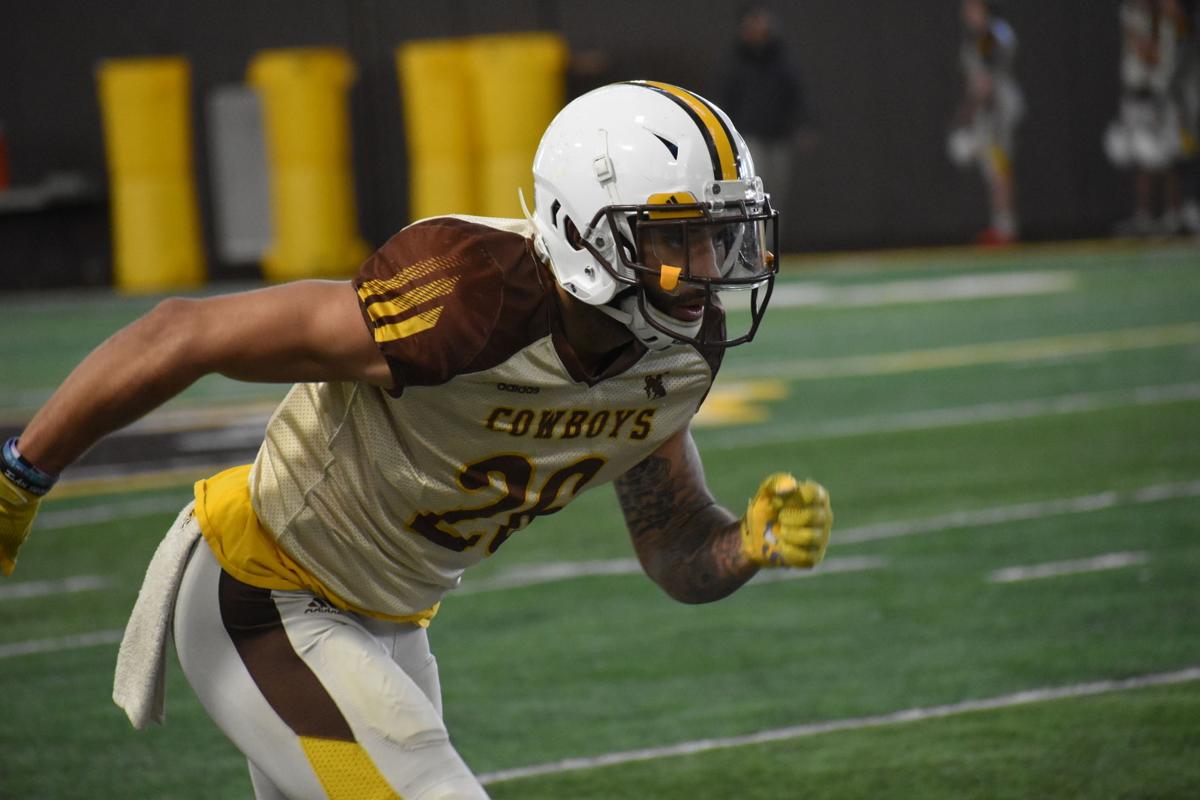 Wyoming senior safety Braden Smith goes through a drill during spring practice May 4 at the team's indoor practice facility in Laramie. Smith is one of six seniors who took advantage of the NCAA extending the eligibility of all fall-sport athletes.

After the 2020 Mountain West football season was first canceled because of the coronavirus pandemic before teams were eventually allowed to play a limited number of games last fall, Wyoming head coach Craig Bohl is excited to get the 2021 campaign started.

“It’s great to be back playing college football and doing a lot of things that are going to have some semblance of normality,” Bohl said Wednesday during a Zoom call with local reporters from the MW Football Media Days in Las Vegas.

While admitting that this past offseason “wasn’t completely normal,” Bohl likened it to the 2019 season.

“We had 10 straight weeks of work (in winter conditioning) and that allowed our guys to get bigger, stronger and faster,” he added. “I thought we had a good spring, the summer has been good and now we’re excited to get into this next year.

“One of the things we strive to do is have a program with a great deal of consistency and play a physical brand of football. That means there a lot of elements that come into play. What COVID did is it took all of those things and just shredded them.

“And so for our coaches to be able to have a normal spring, for our players to know what’s expected and be able to plant their feet, so to say, has certainly been encouraging and I think you’ll see an experienced football team when we open up against Montana State.”

The Cowboys, who were picked Wednesday by the media to finish second in the Mountain Division behind Boise State this season, definitely have experience. UW returns 21 of 22 starters, including six seniors — defensive end Garrett Crall, offensive linemen Logan Harris and Alonzo Velazques, running back Trey Smith and safeties Braden Smith and Esias Gandy — who took advantage of the NCAA extending the eligibility of all fall-sport athletes.

“Every program has had to learn how to deal with these ‘super seniors,’” Bohl acknowledged. “And then you had the one-time transfer rule. But we just did not have a lot of changeover with our roster. To have a lot of our guys come back and play another year is really heartwarming, there’s a great look in their eye.

“Football is a game of numbers, so to have the number of guys that stayed and bought in for the Cowboys is encouraging. It gives us a great foundation as we move forward.”

Cryder, a 6-foot-4, 309-pound center, is a three-year starter and anchors an offensive line that returns all five starters as well as significant number of backups. Valladay (6-0, 198) is a two-time all-conference honoree who led the MW in rushing each of the past two years. Muma (6-3, 242) led the Cowboys in tackles, tackles for loss and sacks in his first season as a starter in the middle of the defense.

Quarterbacks Sean Chambers and Levi Williams also return after dealing with injuries last year. Chambers (6-3, 225), who suffered a broken left fibula on the third play from scrimmage in last season’s opener at Nevada, ended spring camp as QB1 after receiving a clean bill of health. It was the third season-ending injury for Chambers. Williams came on in relief of Chambers each of the past two seasons, including leading UW to a victory over Georgia State in the 2019 Arizona Bowl.

“Both of them had a great offseason,” Bohl said. “We named a starter, but that doesn’t mean things are entrenched in stone. Both of those guys had a great summer and guys have rallied around them. We’re going to be deeper than we ever have been and to have two quarterbacks that experienced is certainly going to be something that we’re going to lean on heavily.”

Chambers and Williams, and the entire offense, have a new man in charge after Tim Polasek replaced longtime offensive coordinator/quarterbacks coach Brent Vigen, who was named the head coach at Montana State in the offseason. Polasek, who worked with Bohl at North Dakota State, most recently was the offensive line coach at Iowa. Polasek will be charged with re-engineering an offense that has produced one of the nation’s best rushing attacks but has struggled in the passing game.

“There were elements of our offense that needed to improve and we think we made steps during the course of the spring to address some of those,” Bohl admitted. “I think we refined some things. You’re not going to see earth-shattering change with our style of play, but you’ll see different wrinkles that haven’t been there before.”

If the offense can reach a new level under Polasek and the defense can continue to perform at a high level, the Cowboys’ game at Boise State on Nov. 12 could well decide which team represents the Mountain Division in the MW Championship Game on Dec. 4. Bohl smiled when asked about the preseason ranking.

“I think polls are always good,” he said. “It gives guys in the media things to talk about or maybe the guys out in the coffee shop up in Sheridan or out in Rock Springs.

“A college football coach thinks he has a pulse on exactly where the team is at,” Bohl added. “I’m optimistic, but I probably won’t have a clearer understanding until the middle of the Montana State game.”

VETERAN LEADERSHIP: The Cowboys return 21 of 22 starters from last year, and have seven seniors on their two-deep roster heading into fall camp next month.

Was the Brewers-White Sox series a preview of the 2021 World Series?

Running back Xazavian Valladay, linebacker Chad Muma and offensive lineman Keegan Cryder were selected by members of the media Thursday.

Wyoming running back Xazavian Valladay and linebacker Chad Muma will represent the Cowboys at event.

The annual award is presented to the most outstanding running back in college football.

University of Wyoming juniors Xazavian Valladay and Chad Muma were both named to national player of the year award watch lists on Monday.

Wyoming coach Craig Bohl prepares to lead the Cowboys out of the tunnel before their game against Colorado State on Nov. 5, 2020, at Canvas Stadium in Fort Collins, Colo.

Wyoming senior safety Braden Smith goes through a drill during spring practice May 4 at the team's indoor practice facility in Laramie. Smith is one of six seniors who took advantage of the NCAA extending the eligibility of all fall-sport athletes.