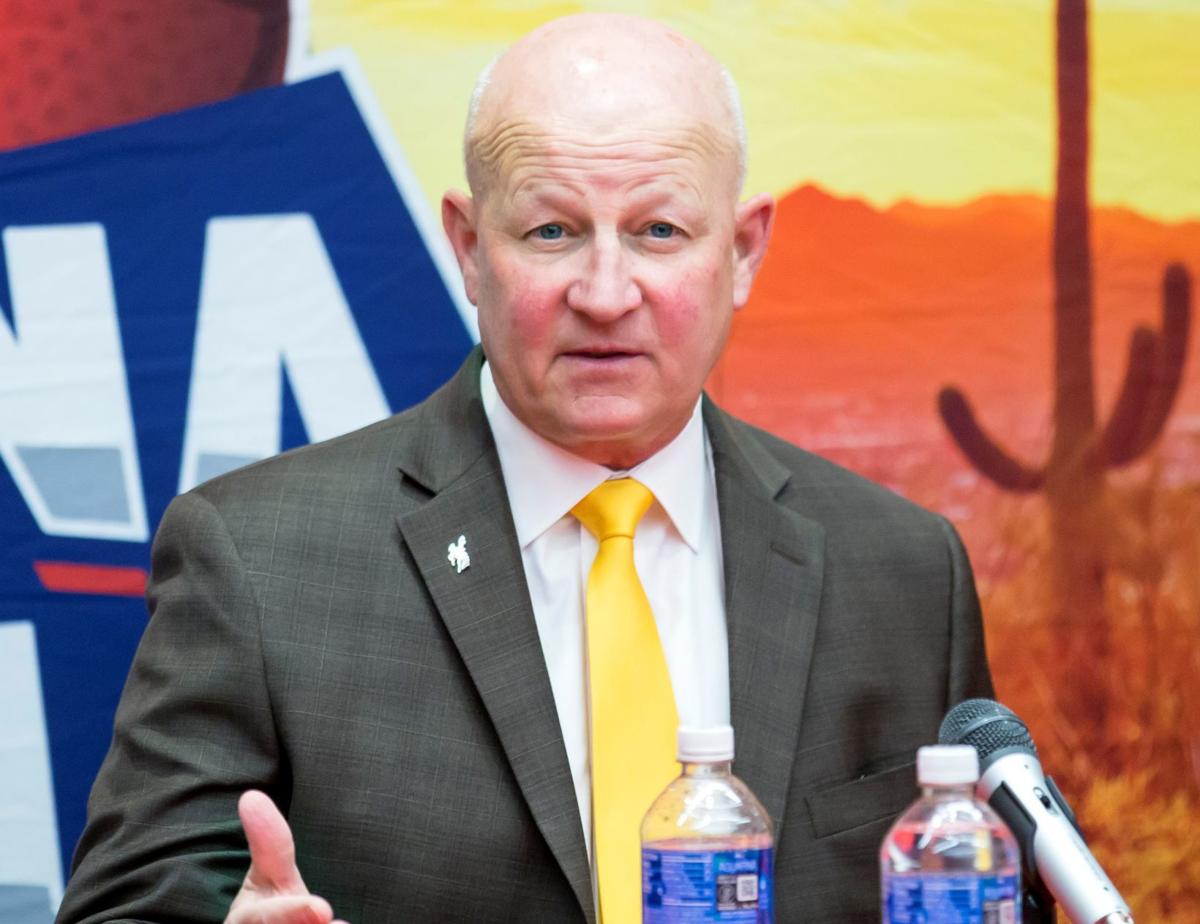 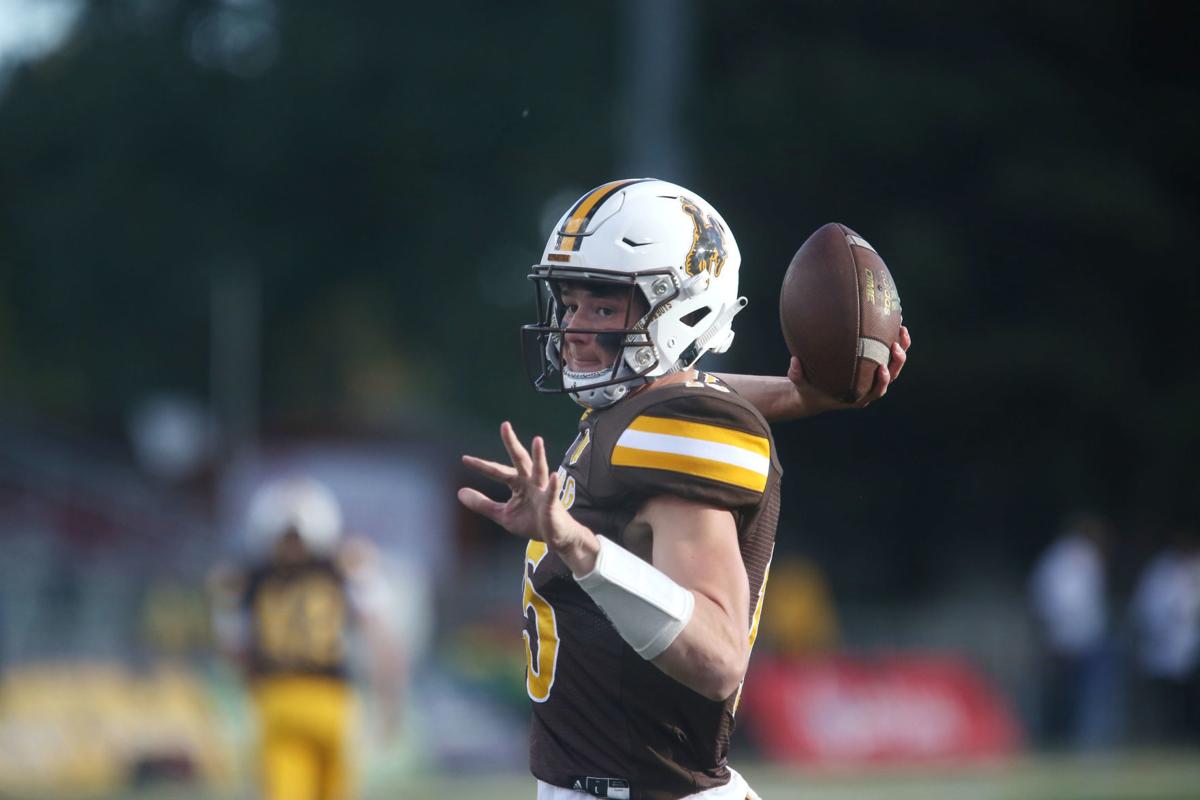 Wyoming quarterback Levi Williams (15) throws the ball to a teammate during warmups before the game against UNLV on Sept. 28 at War Memorial Stadium in Laramie. 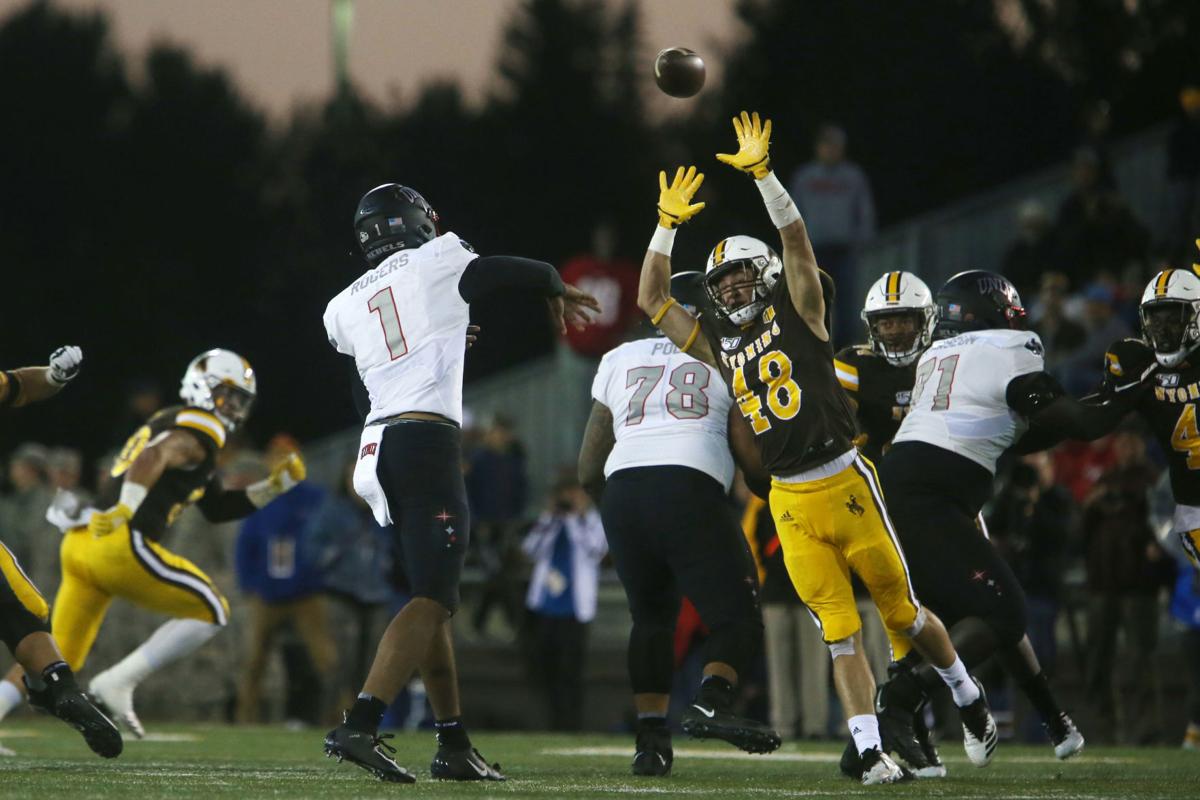 LARAMIE — It’s been less than a week since Wyoming ended 2019 with a convincing 38-17 win over Georgia State in the Arizona Bowl for its third eight-win season in the last four years, but it’s never too early to look ahead.

Spring practice will be here in March, so here are five major questions for the Cowboys heading into the offseason.

Who will be the Cowboys’ quarterback?

Sean Chambers began the season as Wyoming’s quarterback. Levi Williams ended it with that designation.

That’s because Chambers went down with a season-ending knee injury after eight games and backup Tyler Vander Waal entered the transfer portal before the bowl game. But could there be a competition between Chambers and Williams going into next season?

Wyoming coach Craig Bohl has said in the past that he’s never demoted a player on the depth chart because of an injury, but Chambers isn’t expected to go through spring practice as he continues his recovery. That means Williams will get all the first-team reps then after a strong finish to his true freshman season.

Williams, who will get to keep his redshirt after playing in just three games, accounted for four touchdowns and threw for 234 yards in the bowl game — the most for any Cowboy QB this season. Both Williams and Chambers will have to improve their efficiency through the air with neither one completing more than 49 percent of his passes this season, but the 6-foot-3, 225-pound Chambers also brings a skill set in the running game that’s unlike any other quarterback in the Mountain West (10 rushing TDs, team-high 6.3 yards per carry).

Maybe there’s a platoon, though Bohl has historically favored playing just one quarterback. But Wyoming has two young options it likes at the position.

Who’s next at linebacker after Logan Wilson (and Cassh Maluia)?

Wyoming is losing six starters on defense, and none of them are more notable than Logan Wilson.

For the first time in five years, the Cowboys have to worry about life without the Casper native, a former defensive back at Natrona County High School who morphed into one of college football’s top linebackers during his time in Laramie. An All-American this season, Wilson finished his career as the No. 4 tackler in school history and among the top 5 tacklers in MW history and also had 10 career interceptions.

And don’t forget about fellow senior Cassh Maluia, Wilson’s running mate at outside linebacker for the last three seasons. Largely overshadowed by Wilson’s accolades, Maluia had 198 career tackles. Between the two, that’s 619 tackles the Cowboys are losing at the position.

Coaches are high on sophomore Chad Muma, who had 51 tackles as Wyoming’s third linebacker this season and figures to take Wilson’s place in the middle. But there are more questions than answers at a position that just lost a ton of production and experience.

What about the back end of the defense?

Last year at this time, the question was who was next at safety with four-year starters Andrew Wingard and Marcus Epps on their way out? The uncertainty loomed larger at free safety with Alijah Halliburton taking over for Wingard at strong safety after starting six games last season, but now Halliburton is out of eligibility after excelling in his lone season as a starter on the back end.

Halliburton led the MW with 130 tackles on his way to first-team all-league honors. Another rising senior, Esaias Gandy, is likely to get the first crack to be Halliburton’s successor after spending this season as his primary backup. Sophomore Miles Williams is another option while junior Braden Smith, Rome Weber’s backup at free safety this season, could possibly slide over to join the competition if coaches want to get a look at him there, but the trio has combined for just two career starts.

Wyoming is also losing three-year starting cornerback Tyler Hall, who also proved to be one of the MW’s most dynamic kick returners during his career. Hall, who averaged more than 30 yards a return, is the only Wyoming player to ever return multiple kickoffs for touchdowns in a season.

C.J. Coldon, who’s started six games the last two seasons but hasn’t been able to finish either with injuries, is likely to be back at the top of the depth chart alongside Azizi Hearn once he’s healthy again, but Wyoming has to replace more than coverage ability with Hall gone.

Cooper Rothe’s final season didn’t live up to the senior’s expectations, but the Cowboys’ longtime placekicker largely brought stability to a position that didn’t have much before he showed up on campus four years ago.

Now Wyoming has to start over there.

Rothe converted 68.1 percent (15 of 22) of his field goals this season after leading the country in field-goal percentage (94.1) a season ago when he was a finalist for the Lou Groza Award. But Rothe made 76.6 percent of his field goals for his career and capped it with a career-long 53-yarder in the bowl game. He also finished his career 165 of 169 on extra points.

His 342 career points are the most in school history — 18 more than another Wyoming kicker, Sean Fleming, who played from 1988-91. In searching for his replacement, the Cowboys may start with Buffalo native Luke Glassock, a freshman walk-on who finished the season No. 2 on the depth chart.

Wyoming tied Air Force last season for the fewest passing yards per game in the Mountain West. Before Williams threw for 234 yards in the bowl game, the Cowboys were on pace to finish dead-last in that department this season.

And that was with the league’s leading rusher, Xazavian Valladay, pacing the league’s No. 2 rushing attack — one that finished in the top 30 nationally.

Whether it’s yards or completion percentage — Wyoming has gone two straight seasons completing less than half its passes — the Cowboys have struggled mightily to find efficiency through the air. Wyoming is losing three starting receivers in Austin Conway, Rocket Ismail Jr. and John Okwoli, but that doesn’t get as much attention as the other departures simply because the group combined for just 55 receptions and three touchdowns this season.

Wyoming leaned on its running game and one of the MW’s top defenses to stay in every game. The Cowboys’ four league losses came by a combined 15 points. Wyoming didn’t score more than 22 points in any of them, largely because it didn’t have an answer when defenses took away what it did best.

Wyoming needs more from a passing game that’s been dormant for too long. Bohl has acknowledged the need to be more balanced, particularly against the better teams on the schedule. This may be at the top of the Cowboys’ to-do list.

Chambers is more than six months removed from knee injury that ended his redshirt freshman season.

Wyoming quarterback Levi Williams (15) throws the ball to a teammate during warmups before the game against UNLV on Sept. 28 at War Memorial Stadium in Laramie.