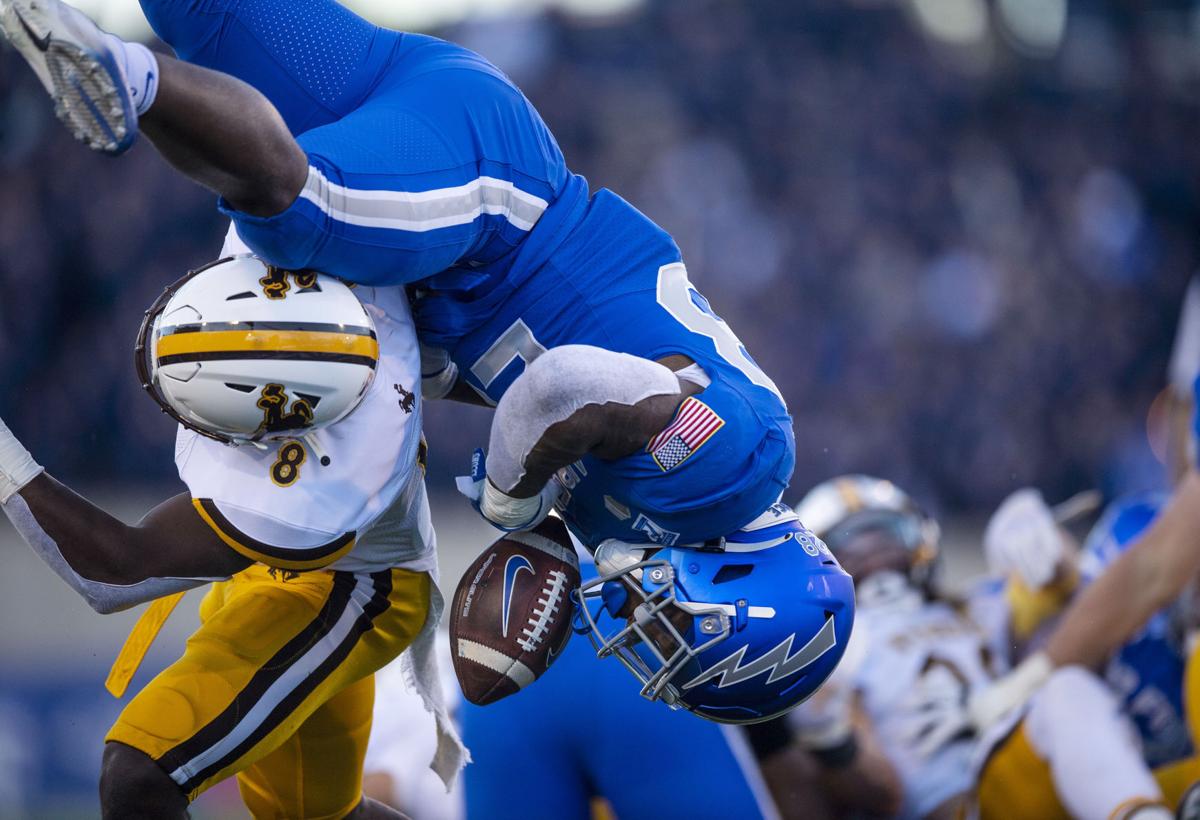 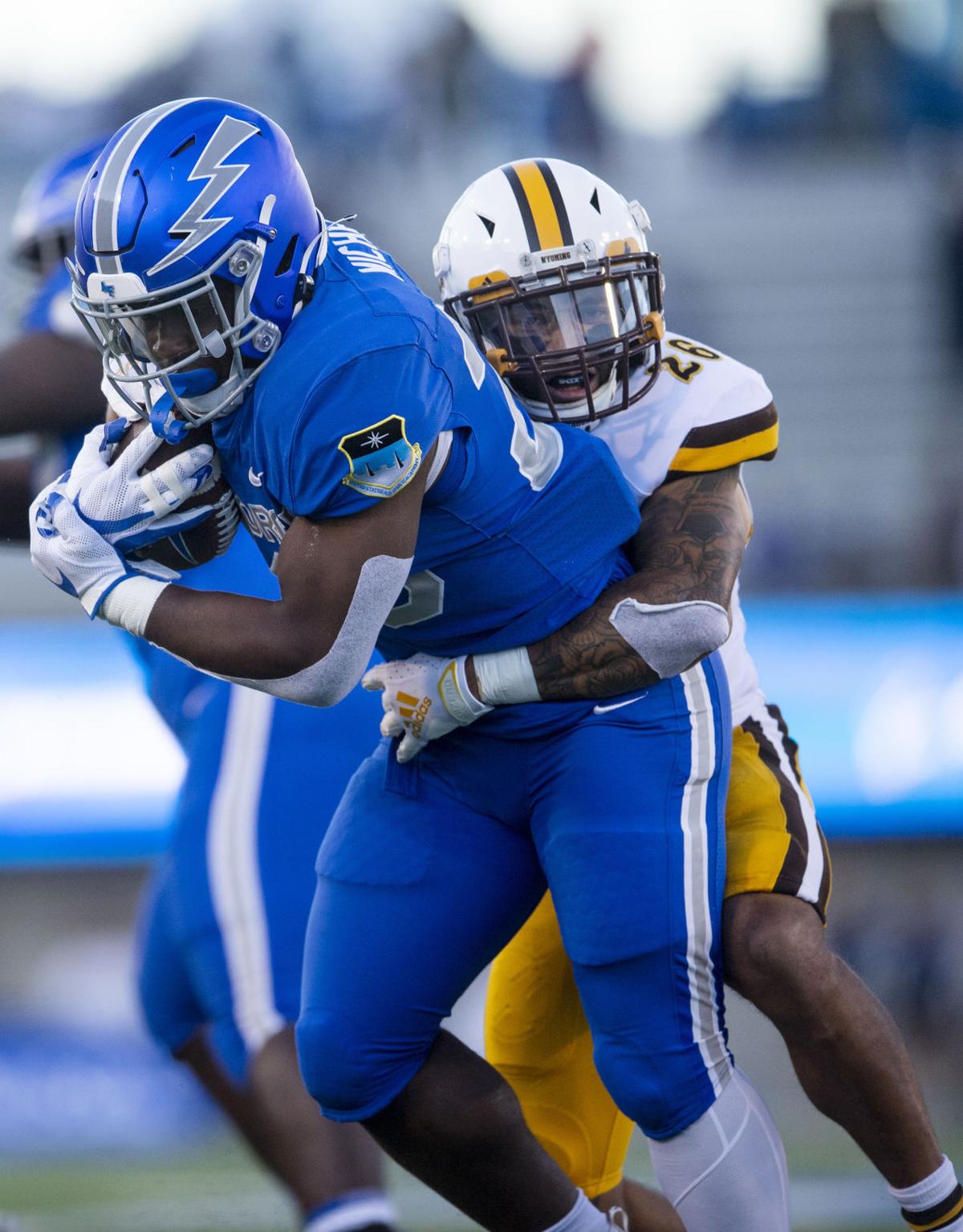 AIR FORCE ACADEMY, Colo. – So much for the theory that Wyoming could use the bye week to hone in on ways to stop Air Force’s triple-option.

The Cowboys allowed Brad Roberts to set the tone with an 18-yard run right up the middle on the first snap of the game. The Falcons’ fantastic fullback capped the 15-play, 75-yard drive with a 1-yard touchdown and finished with 140 yards rushing.

When UW’s started to slow down the ground game, Air Force quarterback Haaziq Daniels calmly went 7-for-10 passing for 110 yards and a touchdown in the second half.

The Cowboys lost 24-14 on Saturday night at Falcon Stadium. It doesn’t sound like much would change if they played the Falcons a month from now.

“This team, hell, you could practice for four weeks in a row and they’re going to have some stuff,” UW head coach Craig Bohl said, which was meant as more of a compliment for his counterpart than a criticism of his team’s effort. “Troy Calhoun does a great job. It was going to come down to we were going to need to get some turnovers and stay on the field offensively.”

Here are five takeaways from UW’s first loss of the season:

1. The Pokes were not ready for primetime

Had the Cowboys won the conference opener on the road they would be tied with Border War rival Colorado State atop the Mountain Division standings and may have even cracked The Associated Press top 25.

Instead, UW has fallen back to fifth place in the early stages of the six-team race entering this week’s home game against Fresno State.

There is a silver lining for fans who like early kickoff times: The Cowboys will host the Bulldogs at 1:30 p.m. at War Memorial Stadium on FS2.

The Boise State-Air Force game was selected by the network Sunday for the primetime slot – 7 p.m. on FS1 – after the Broncos upset No. 10 BYU and Air Force improved to 5-1 overall with the win over UW.

“It’s just one game. We have a 24-hour rule, win or lose,” quarterback Sean Chambers said. “We’re going to take that 24 hours and regroup on Monday and move forward. We’ve got a good opponent in Fresno coming to our home, so we’ve got to use that to our advantage.”

Despite allowing Daniels to make some plays through the air in the second half after not attempting a pass in the first half, the Cowboys are 12th in the FBS is passing yards allowed (171.2 per game) with three interception returns for touchdowns.

But there is definitely some cause for concern this week considering the Bulldogs are third in passing (396.0 yards per game). Quarterback Jake Haener has completed 69.5% of his passes for 2,230 yards with 18 touchdowns and six interceptions in six games.

“We’re going to take a look at the scheme,” Bohl said after Air Force finished with 321 yards of net offense and went 4-for-4 in the red zone (three touchdowns, one field goal). “They exploited it, and we didn’t answer very well.”

Cornerback C.J. Coldon had two pass breakups, six tackles and the team’s only sack, which came when halfback Dane Kinamon was about to attempt a pass.

“We’ll bounce back,” Coldon said. “Practice is going to be hard this week. Everybody is going to be detailed. This loss hurts us all, as a defense, as an offense, as a whole team, coaching staff. Back to the drawing board.”

3. No creativity early, no protection late

Here is what happened on the first play of UW’s first four drives – rush for no gain (after a delay of game), rush for 1 yard, incompletion, rush for 3 yards.

Those drives ended: Punt, fumble, punt, punt as the Pokes fell behind 14-0.

Then Xazavian Valladay finally provided a spark with a 74-yard run to start UW’s fifth possession, which led to a touchdown run by Chambers.

The Cowboys tied the score 14-14 just before the intermission as Chambers ran for 13 yards and went 3-for-4 passing for 60 yards, including a 10-yard touchdown to Isaiah Neyor.

UW had a first-and-10 at the Air Force 32-yard line with a chance to take the lead on the opening drive of the second half, but Chambers was thrown for a 4-yard loss on a bootleg and the Pokes punted following two subsequent incompletions.

First-year offensive coordinator Tim Polasek needs to figure out a way for UW to get in more third-and-short situations or it’s going to be a long MWC season for Chambers.

“We are making some progress on third-and-long, but we’re not Tom Brady back there,” Bohl said. “Air Force did a good job. I thought we needed to be more efficient on first-and-10 and we were just inconsistent there and that created too many third-and-longs. That played into their hands.”

During pregame warmups, John Hoyland was splitting the uprights in the south end zone at Falcon Stadium from over 50 yards out.

But trailing by 10 points and facing the aforementioned fourth-and-10 from the Air Force 25, Bohl decided to keep Chambers on the field to make a play instead of giving his placekicker a chance to make it a one-score game.

Chambers was sacked with 1:15 remaining, and UW got the ball back again with seven ticks left after four Air Force kneel-downs.

If Hoyland would have made a 43-yard field goal through the swirling wind, there is a chance the Cowboys could have been able to get in position for a Hail Mary try down seven points on the final possession.

“At that time I just felt like we going to try to play for a touchdown,” Bohl said of the decision. “So I was more comfortable with that.”

UW also punted from the Air Force 36-yard line in the third quarter instead of trying to convert a fourth-and-14 or letting Hoyland take a crack at a 53-yard field goal.

5. Time for some home cooking

The Cowboys will play three of their next four games at War Memorial Stadium after a long road trip to UConn, the open date and the disappointing bus ride back from the Academy.

The last time UW was in the friendly confines back on Sept. 18, the team put together by far its best performance of the season during a 45-12 thrashing of reigning Mid-American Conference champion Ball State.

Fresno State won’t be intimidated after nearly upsetting Oregon at Autzen Stadium and beating UCLA at the Rose Bowl to reach No. 18 in the AP poll. But the Bulldogs (4-2, 1-1) will fly to 7,220 feet unranked after suffering a 27-24 loss at Hawaii before last week’s open date.

This stretch will determine whether the preseason talk about contending for a MWC title was warranted or just hot air.