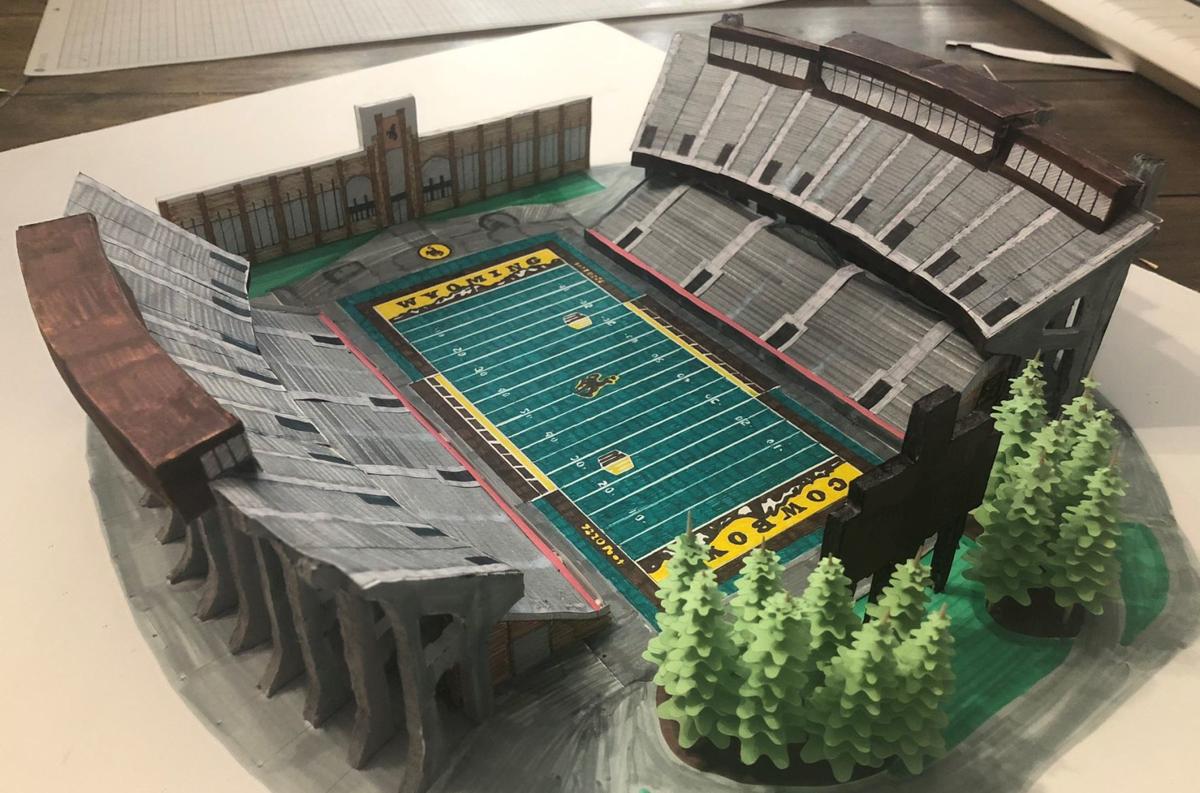 Former Wyoming athlete Josh Barge is occupying some of his free time during the coronavirus outbreak by building paper stadiums, including this replica of War Memorial Stadium. 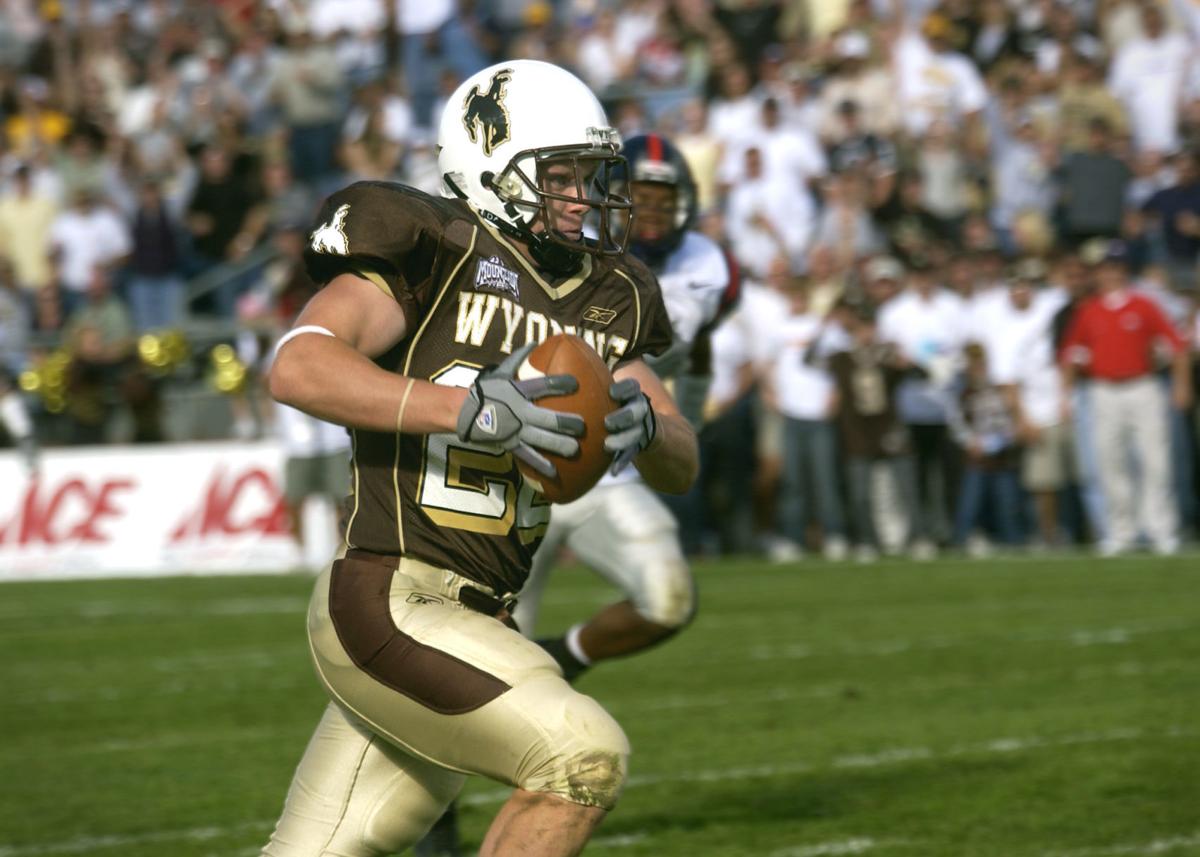 Josh Barge played football for Wyoming from 2002-05 and also ran track for the Cowboys.

LARAMIE -- It includes the images of the Teton Mountains in the end zones, the High Altitude Performance Center and even the trees flanking the scoreboard.

It’s a much smaller version of War Memorial Stadium, one that won’t ever have games played in it, but Josh Barge didn’t skimp on the details as he crafted his own version of the stadium where he played his college football.

Barge, a receiver at Wyoming from 2002-05, is now a physical education teacher at Red Mountain High School in Mesa, Arizona, where he also serves as the varsity football team's offensive coordinator and the head boys track coach. But Arizona has closed all of its schools for the rest of the academic year in response to the coronavirus pandemic, so Barge’s days that are usually full of teaching and coaching have been relegated to virtual instruction and daily emails.

“Basically it’s just a waiting game until a kid responds for help, so I could either just sit there on the computer and get stuck in a loop of watching YouTube videos and stuff like that or kind of pass the time with something that was constructive,” said Barge, who also ran track for two years at UW.

Barge and his wife, Crystal, have a 15-month-old son, Carson, who helps keep them busy while they both work from home, but Barge also needed a hobby to occupy some of his free time. He admitted there are projects around the house he could work on, but they wouldn’t be cheap at a time when the shutdown is taking a financial toll nationally.

“Money’s probably not the smartest thing to be spending right now,” Barge said.

So Barge spent the better part of two weeks building a replica of War Memorial Stadium out of paper. Barge said he remembers looking at maps and architectural drawings as a child growing up in Missouri while his mother had a paper mache hobby of her own, but he’d never really thought about taking on this kind of project until a few weeks ago when he went down a Twitter rabbit hole and ran across the profile of Paper Stadiums, an account created by Trey Ashby, a Nebraska native who’s built paper replicas of the Cornhuskers’ Memorial Stadium, Chicago’s Wrigley Field and New York’s Yankee Stadium to name a few.

“And he’s got like three videos of how he makes them, the process and all of that, and I was like, ‘Man that’s really cool,’” Barge said. “And I’m like, ‘Well I think I can do that.’”

Barge pulled up an image of UW’s stadium on Google Earth and zoomed in to where the field took up nearly his entire computer screen so he could trace it on a piece of paper. He used more copy paper, construction paper, foam board, toothpicks, markers and glue -- approximately $15 worth of supplies -- to erect the stadium once he had his horizontal and vertical scales, the latter of which took some time to figure out.

“I couldn’t find anything online that said how tall (the stadium) was, so I ended up getting it on Google Earth on Google Maps when you go to street view,” Barge said. “And I was able to see a guy standing next to the door that was underneath to go to the concession stand, and I was able to get the height of that door from looking at the guy that was standing there. And that’s how I got my vertical scale. Once I got that, all the pieces fit.”

With every 1 ⅛ inches representing 50 feet, Barge constructed a model that measured 14 inches from end zone to end zone, 12 inches wide and 3 ½ inches tall. After coloring in the field turf, end zones and sidelines, Barge began creating the lower decks. He then made 28 support columns out of foam board -- 14 on each side of the stadium -- and pieced together the upper deck, overlapping pieces of paper as he colored to give the appearance of rows in each section of seating.

He then added the press box to the upper west side of the stadium and the Wildcatter club suites to the upper east. Next came the video scoreboard in the South end zone and the accompanying trees, which Barge made by cutting pieces of green construction paper of various sizes resembling foliage and sliding them onto the toothpicks.

“I wasn’t going to make the trees, but then I was like, ‘Man, it’s not the War without the trees,’” Barge said.

Once he added the facade of the High Altitude Performance Center behind the North end zone Sunday night, Barge’s model was complete.

“It wasn’t like I sat down and did nothing but that for the entire day,” Barge said. “It’d be like 30 minutes here, 30 minutes there, an hour here. So I bet you over the course of two weeks, it probably took me about 30 hours to make it.”

Barge shared photos of the finished product through his Facebook and Twitter accounts. He’s heard from former teammates who’ve complimented him on its attention to detail. He said he’s even had a handful of UW fans ask him if they can buy his creation.

“I’m kind of surprised how well it turned out the first time,” Barge said. “Even the Paper Stadiums guy was like, ‘Dude, that’s really good for your first one.’”

Barge isn’t selling it. He said he’ll likely keep it at home in a room that already includes some UW keepsakes, including his jerseys and his diploma. It’s small enough, he said, that he could store it in a helmet display case in order to keep it pristine.

But Barge, who’s already started on a replica of Kansas City’s Kauffman Stadium, didn’t rule out making more if he can find the time once things get back to normal.

“I guess if somebody wants to buy one, I’ll be more than willing to make it,” Barge said. “But right now, I’ve got a little bit of free time. This was something to fill the void of the eight to 10 hours a day that I spent in coaching.”

Signed, sealed and delivered, Logan Wilson waits to see what comes of rookie season with the Cincinnati Bengals

Wilson trained in Casper before recently moving to his new home in anticipation of the Bengals' training camp starting this week.

Former Wyoming linebacker was taken 65th overall by the team during the NFL Draft in April.

Rivals have non-conference football games that could be replaced.

How the Star-Tribune voted for the Mountain West preseason honors

Former Wyoming athlete Josh Barge is occupying some of his free time during the coronavirus outbreak by building paper stadiums, including this replica of War Memorial Stadium.

Josh Barge played football for Wyoming from 2002-05 and also ran track for the Cowboys.