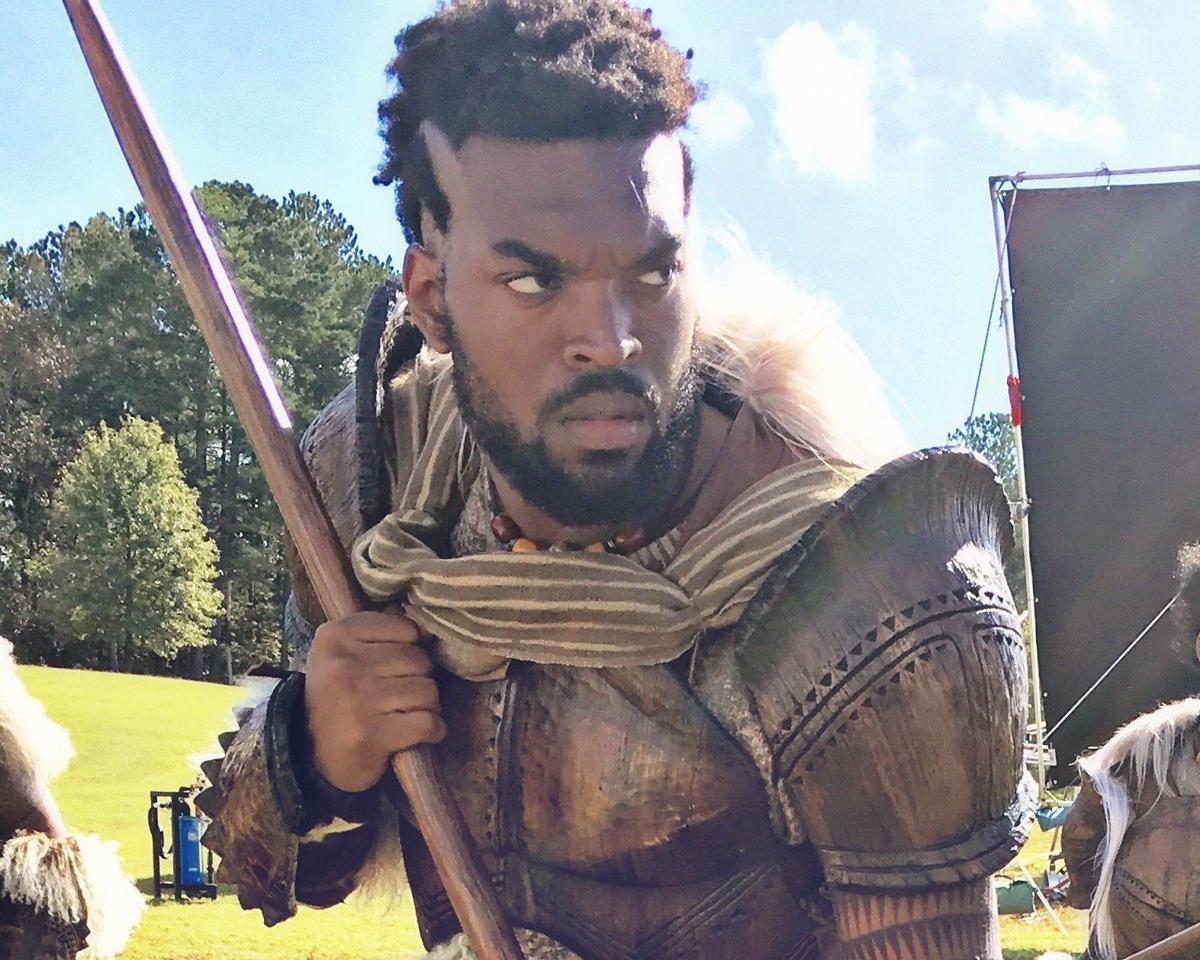 Mark Willis, a former Wyoming football player, landed the role of a Jabari warrior in the 2018 superhero mega-hit "Black Panther." Willis played for the Cowboys from 2011-14. 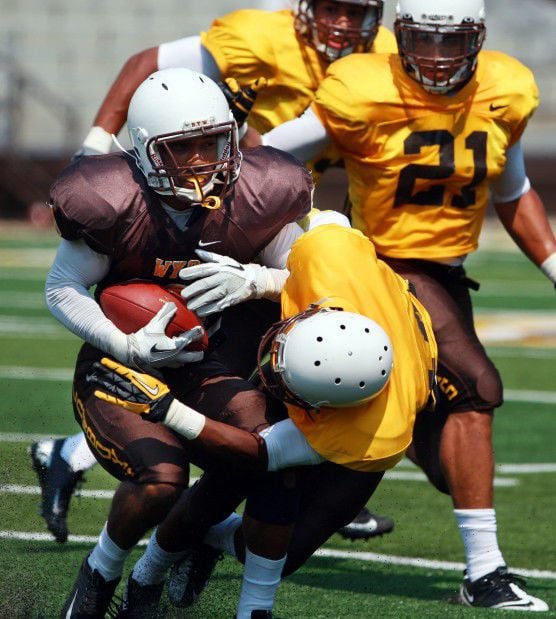 Former Wyoming receiver Keenan Montgomery is wrapped up by cornerback Tyran Finley during the Cowboys' scrimmage on Aug. 17, 2013 at War Memorial Stadium in Laramie. 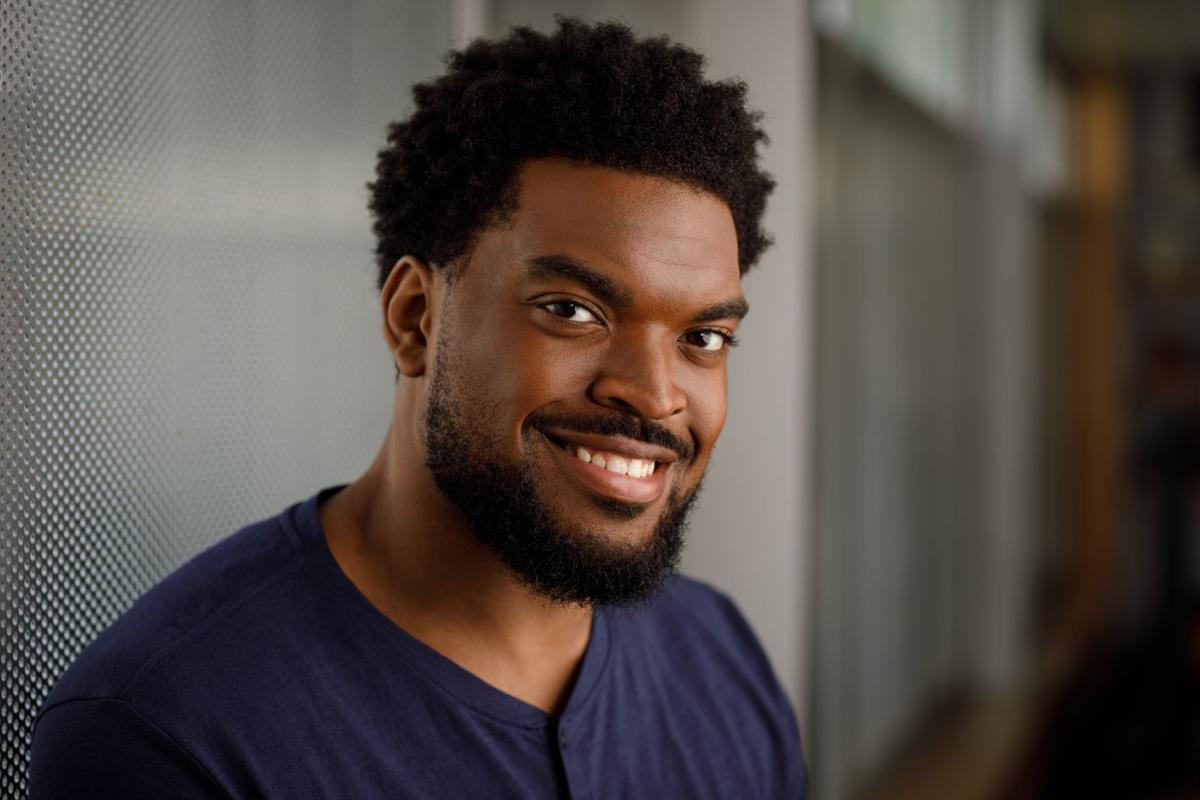 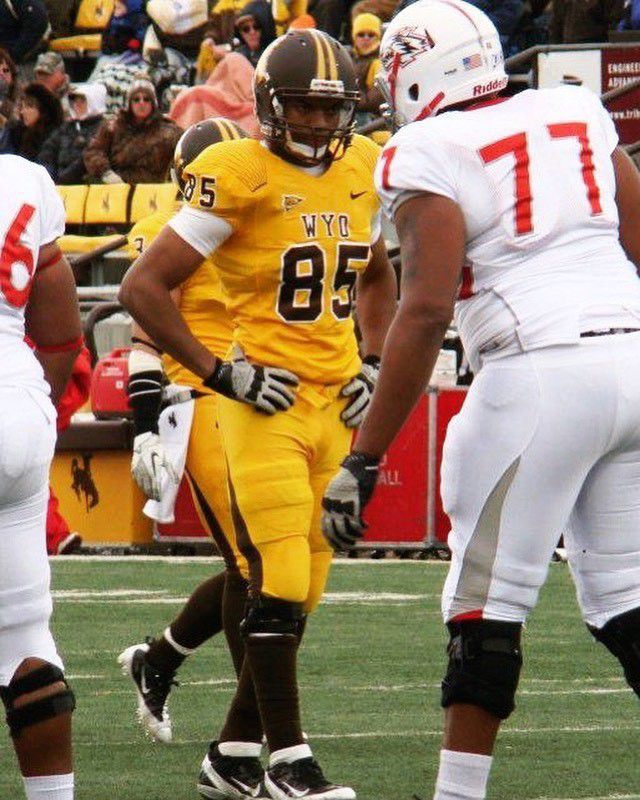 Mark Willis was a defensive end for Wyoming from 2011-14. 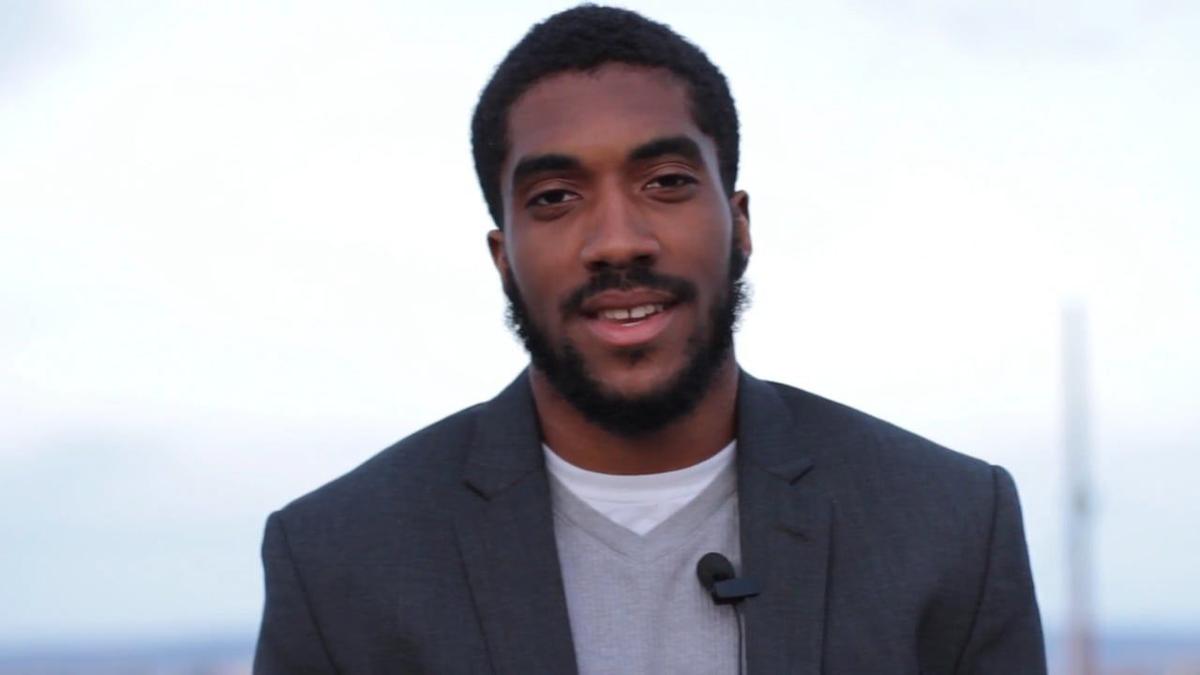 Keenan Montgomery is a music artist and songwriter. The former Wyoming receiver wrote a poem, "My Black Experience," for a student documentary during his time at the University of Wyoming.

Their lives beyond the University of Wyoming don’t include football, and both are OK with that.

Willis, who played for the Cowboys until 2012, spent many of his fall Saturdays as a student-athlete chasing quarterbacks as a 6-foot-4, 225-pound defensive end. Montgomery played on the other side of the ball, catching passes as a receiver at UW until his eligibility expired following the 2014 season.

Willis has taken up acting and is quickly seeing his star brighten in the profession. His biggest role to date came in the 2018 Marvel superhero movie “Black Panther,” an Academy Award-winning film that’s reportedly one of the top 15 highest-grossing movies of all-time.

Montgomery dove into the world of hip-hop. As a rapper, singer, songwriter and producer, he’s emerging as one of the more versatile young artists in the industry. His music has been featured on American television shows as well as various sports programming, and he’s created his own business, Keenan The First LLC, to manage his career.

“Essentially what I want to do is exist like an indie label,” Montgomery said. “I kind of just want to own my own future because now is the best time in music to just be your own entity. The hope is that I get to do more big-movie music and to attach myself to bigger campaigns for brands and to just be able to fund my own operations.”

Willis and Montgomery, who are both African American, were back on campus last week as part of UW’s annual Martin Luther King Jr. Days of Dialogue events. Both spoke while Montgomery also performed as part of the school’s celebration of Black History Month.

Willis said his message to those in attendance was simple: Be a visionary.

“Those things you keep seeing over and over in your head, this is the plan I want for my life. These are the goals I want to reach,” Willis said. “Being able to put the work in to actually making that vision come true and everything. I want to talk about being here and getting all the way to Black Panther because all of that came from a vision.”

Montgomery, a native of St. Paul, Minnesota, followed a high school teammate to UW and walked on the Cowboys’ football team in 2010. He played primarily as a reserve and a special teams contributor under then-head coach Dave Christensen for three seasons before playing his final season for Craig Bohl.

Still, Montgomery always planned to pursue his dream of playing in the NFL. But four concussions during his career with the Cowboys, including one as a senior, ended that.

“I had a conversation with a neurologist, the team doctor and my parents,” Montgomery said. “They all basically laid out my options because I was one of the guys with a higher GPA on the team. I was just like, ‘Think about your future.’ And football just didn’t really fit into the future for me.”

Obstacles remain for black athletes in Laramie, but players and coaches are working to build trust and community

But music was always Plan B. It took up as much of Montgomery’s time in college as classes and football did. It wasn’t uncommon for Montgomery and some of his teammates to record music on his computer in his dorm room, he said.

“I opened up for the winter concert here my senior year,” said Montgomery, an English major who double-minored in professional writing and creative writing. “It was just kind of like the next thing to do.”

Montgomery, who now lives in Chicago, spent five years in Los Angeles after graduation working to get his career off the ground. He released singles and albums during that time and worked with Sony Music and Reach records as a songwriter.

His blended sound of rap and R&B began to catch on in the world of entertainment. His song “It’s You” is featured on the soundtrack for the CW television series “All American,” which is now streaming on Netflix, while channels such as MTV and BET have also used Montgomery’s music. Another single, “Fine By Me,” has been featured on ESPN, FS1 and other sports networks.

Montgomery said the success he’s enjoyed so far has come in part from reinventing himself once his days playing football were over. The 27-year-old credited an “enlightening” college experience for helping him be able to do that.

“I learned a lot (at UW),” Montgomery said. “There’s a lot to learn, and it’s a very different community from where I grew up. I always tell people that I feel like I learned a lot about who I am being in a place where there wasn’t really that many people like me. So I’m thankful for the opportunity to be here.”

A Chicago native who was initially recruited to UW by Joe Glenn before playing for Christensen once Glenn was fired following the 2008 season, Willis returned home after graduating in 2012 with a communications degree but unsure of exactly what he wanted to do next.

That’s when Willis’ aunt showed him an advertisement in the newspaper about a local casting call for a Star Wars movie.

“She was like, ‘You should go do this.’ And I’m like, ‘All right, cool,’” Willis said. “I never thought about acting before in my life, but I’m going to go do this.”

Willis and others were turned away before even getting in the door because of a massive turnout, but he didn’t leave empty-handed. Pieces of paper were handed out with multiple casting websites listed on them, which Willis made sure to hold on to.

He first landed roles as extras on TV series “Chicago Fire” and “Sense8.” Looking for more work in the fall of 2017, he referred to the list of casting websites to catch his biggest break in the industry so far.

“One of them had a casting for something that was called ‘Motherland’ at the time, and I had no idea what it was,” Willis said. “But the casting was they wanted people who were black, tall, handsome, muscular and athletic. And I figured I was at least one of those things, so I decided to submit for it.”

What Willis didn’t realize was “Motherland” was code for “Black Panther.” While out of town shooting a commercial, Willis said he got a text from the casting director asking if he could submit material within the next 30 minutes.

“So then a couple days later, a different number texted me, and they were like, ‘This is the casting director for Motherland/Black Panther,” Willis said. “And I was like, ‘Oh, crap. That’s what that actually was.’ They were using a code name the whole time. They were like, ‘We need to get you to Atlanta tomorrow for an audition.’”

Willis auditioned the next morning and got the part as a Jabari warrior in the mega-hit movie, which featured a predominantly black cast and won multiple Screen Actors Guild Awards. It’s that role, Willis said, that has not only opened the door for more opportunities but has resonated with him more than any others.

“The whole story of how I got that and then being part of a production that was so huge and so influential with African Americans and really people all over the world,” said Willis, 29. “It’s cool to be able to say I was a part of that.”

Willis has also been cast in other TV series such as “Chicago P.D.,” “Empire” and “Shameless.” He’s also got some other projects in the works that he said he can’t reveal because of non-disclosure agreements, but there’s one aspect of his playing days that’s still applicable regardless of the role.

“You go to an audition thinking it’s going to be one way, and then the director will be like, ‘No, it’s more like this,’” Willis said. “You have to adjust on the fly. What I learned from football is being coachable and also, running plays and everything, you have to be in an exact spot. On set and everything, they have markings where you have to hit this exact spot every single time or you lose continuity of the whole thing.”

Mark Willis, a former Wyoming football player, landed the role of a Jabari warrior in the 2018 superhero mega-hit "Black Panther." Willis played for the Cowboys from 2011-14.

Former Wyoming receiver Keenan Montgomery is wrapped up by cornerback Tyran Finley during the Cowboys' scrimmage on Aug. 17, 2013 at War Memorial Stadium in Laramie.

Mark Willis was a defensive end for Wyoming from 2011-14.

Keenan Montgomery is a music artist and songwriter. The former Wyoming receiver wrote a poem, "My Black Experience," for a student documentary during his time at the University of Wyoming.