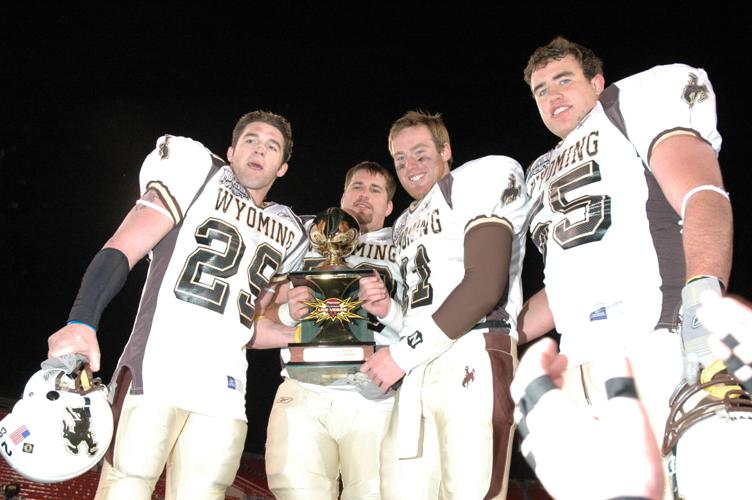 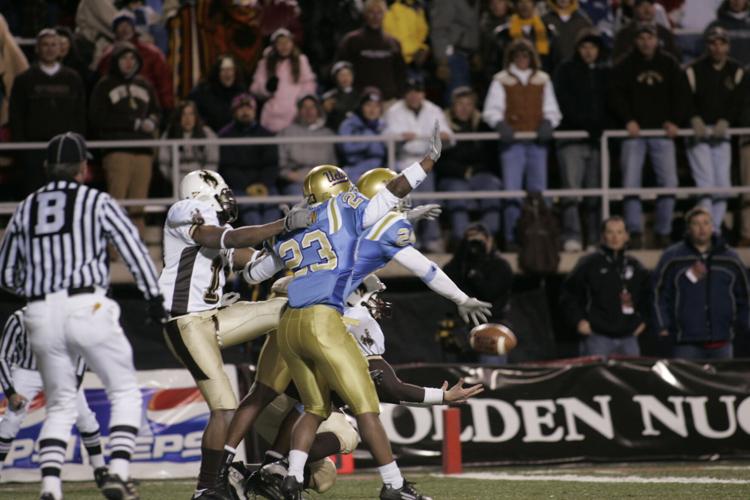 Wyoming's J.J. Raterink makes a diving touchdown catch in the Cowboys' victory over UCLA in the 2004 Las Vegas Bowl.

There are some things money can’t buy.

That includes the happy football life the former Wyoming quarterback is still leading two decades after betting on himself as a walk-on.

“That’s kind of what my life has turned into,” Raterink said. “I couldn’t put a value on what I’ve got to experience and what I get to do. I get to wake up every day and go watch football, learn, coach. It’s almost like stealing that they’re paying anything for it.”

Raterink, who was part of one of the most memorable plays in UW history during the 2004 Las Vegas Bowl, returns to Laramie on Saturday as Northern Colorado’s quarterbacks coach.

“One thing about Wyoming is they support their Cowboys and they support them not just in the time that they’re between the lines playing. They do it for forever,” Raterink said. “So I’m looking forward to seeing a lot of faces I know. Some guys I played with will be there.”

The third Bramlet brotherRaterink, a multi-sport star at Skyline High in Longmont, Colorado, had aspirations of playing college basketball growing up. When he realized football was his best path to a scholarship, he sent out some film late in the recruiting process.

Justin Byleveld, a former UW walk-on from Casper who was a young assistant under Vic Koenig, watched Raterink’s highlight tape and approached him about joining the program as a preferred walk-on.

After redshirting in 2000, Raterink earned a scholarship. But playing time was scarce backing up the Bramlet brothers – Casey and then Corey – throughout his career.

“At the time you’re thinking you’re caught in between two really talented brothers and this is not what you planned,” Raterink said. “You were hoping to be the guy, to be the starter. But the way it worked out is we became such good friends.

“People would always joke that there were three Bramlet brothers running around, and I always kind of took that as an honor that they felt like I was included.”

Despite having the prolific passing brothers from Wheatland behind center, wins were hard to come by for the Cowboys during that era.

Koenig was fired after compiling a 5-29 record from 2000-02. Joe Glenn, who had won two Division II national titles at UNC and an FCS championship at Montana, went 4-8 during his first season at UW in 2003.

“I thought, well, I can either pout about this or make the best of the situation and support them,” Raterink said. “I made sure that when I did get my chance, they would be just as supportive. That’s kind of the route we took and that’s how I approach coaching now in my quarterback room because only one guy usually gets to do it.”

During his senior season, Raterink’s number was called in some big spots.

Raterink started against UNLV and threw four touchdown passes, capped with the game-winner to Jovon Bouknight, to spark the Pokes to a 53-45 triple-overtime victory.

“I remember people were joking because it went triple overtime saying, ‘Man, you must really like ball,’” Raterink said. “I said, well, I was waiting a lot of years for this so I was trying to get as many reps as I could out there.”

The breakthrough conference road win made UW bowl eligible, and more memories would be made that season at Sam Boyd Stadium.

The Cowboys were trailing UCLA 21-10 in the 2004 Las Vegas Bowl when Glenn reached into his bag of tricks. Corey Bramlet pretended to limp off the field with an injury while Raterink rushed onto the field to take a snap. He pitched the ball to C.R. Davis, who then pitched to Bouknight on a reverse.

Bouknight pulled up short of the line of scrimmage and underthrew a pass in the end zone that Raterink adjusted to and caught for a 23-yard touchdown.

Bramlet completed the comeback with a touchdown pass to tight end John Wadkowski with 61 seconds left as UW stunned the Bruins 24-21 for the program’s first bowl win in 38 years.

“Even though the script, I would have at the beginning of my college career written a little bit differently,” Raterink said. “The way it played out, I certainly wouldn’t change any part of it.”

The Hollywood ending was yet to come for Raterink.

Despite graduating from UW with a 4.0 grade-point average in business administration and finance, and being a Rhode’s Scholar finalist, Raterink wasn’t ready to trade the helmet and shoulder pads in for a three-piece suit.

He went to an Arena Football League open tryout in Las Vegas on the same field where he finally shined in the spotlight for the Pokes.

“It was at Sam Boyd Stadium, and I remember I got out there pretty early and just kind of walked to that corner of the end zone thinking, ‘Man, if we threw that ball 100 times I wonder how many of these I’d actually catch right here?’” Raterink recalled with a laugh. “Where Jovon threw that thing, as Joe Glenn used to say, every duck hunter was ready to shoot that wounded duck down when it came out of his hands. …

Full circle moment at the War

Off the top of his head, Raterink isn’t sure if he officially played for 10 or 11 different franchises during his 12-year AFL career. A couple teams acquired his rights that he never actually played for.

But his favorite memories of being an accomplished professional quarterback include breaking Pro Football Hall of Fame inductee Kurt Warner’s records for yards and touchdowns with the Iowa Barnstormers and playing for the Los Angeles Kiss owned by Gene Simmons and Paul Stanley from the iconic rock-n-roll band.

“Prior to my arena career if you told me it was going to play like that, I would have asked you what you had been drinking and why you were so crazy,” Raterink said. “It turned out that way and I wouldn’t trade any of it for the world.”

Raterink grew up cheering for his current boss, Ed McCaffrey, when UNC’s head coach was winning Super Bowls with the Denver Broncos. After working with McCaffrey’s youngest son, Luke, at a camp, his coaching skills impressed the former NFL wide receiver.

That led to being hired by McCaffrey at Valor Christian High in Denver, where they won a state championship together in 2018. When McCaffrey took the UNC job in 2020 he brought Raterink with him to Greeley.

“Someone said, are you nervous? No, I’m not nervous, but I can’t wait to get there and just step on the field,” Raterink said of his War Memorial Stadium homecoming. “You circle certain games and this one I circled for various reasons. We love playing an FBS opponent.

“But for me it’s going to be extra special just because my five years there were so special. So to get to relive that a little bit on a different scale will be a lot of fun.”

HOMECOMING: Former UW quarterback J.J. Raterink, who caught a touchdown pass in the Cowboys' victory over UCLA in the 2004 Las Vegas Bowl, is UNC's quarterbacks coach.

HE SAID IT: “One thing about Wyoming is they support their Cowboys and they support them not just in the time that they're between the lines playing. They do it for forever.” -- Raterink.

Northern Colorado brings a productive passing attack to Laramie, an area where Wyoming's defense struggled in the win over Tulsa last week.

Fresno State, Air Force appear to be the teams to beat in Mountain West

Wyoming dialed up "Big Horn 22" to jumpstart the passing game with Andrew Peasley's 48-yard touchdown strike to Will Pelissier against Tulsa.

Former Wyoming quarterback Josh Allen is the preseason favorite to win the NFL's most valuable player award with the Buffalo Bills.

Wyoming defensive end Braden Siders has taken on the responsibility of filling in for injured teammate Sabastian Harsh and recorded his first sack for the Cowboys against Tulsa.

Pokes are looking to build off potential season-altering win over Tulsa against FCS Northern Colorado.

How the Star-Tribune's Ryan Thorburn voted in this week's AP college football poll.

Wyoming will be facing the nation's best rushing team and perhaps the Mountain West favorite when Air Force arrives under the Friday night lights at War Memorial Stadium.

Wyoming's J.J. Raterink makes a diving touchdown catch in the Cowboys' victory over UCLA in the 2004 Las Vegas Bowl. 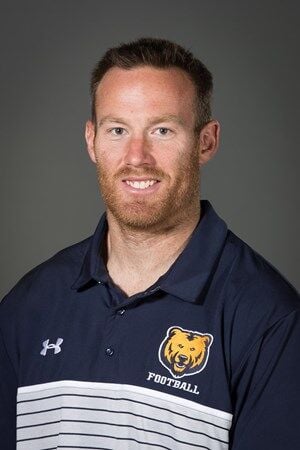