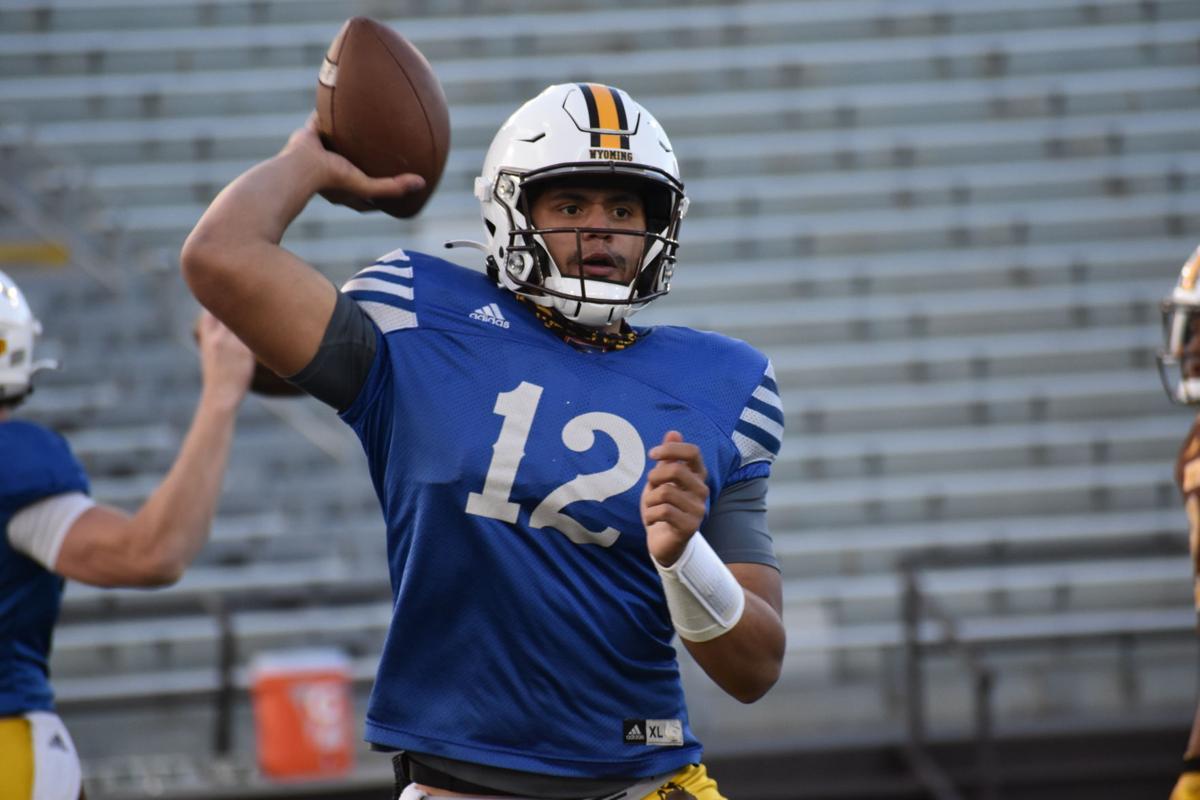 Wyoming quarterback Sean Chambers throws a pass during practice on Oct. 12, 2020, at War Memorial Stadium in Laramie. When healthy, Chambers has been UW's starter since the end of the 2018 season. 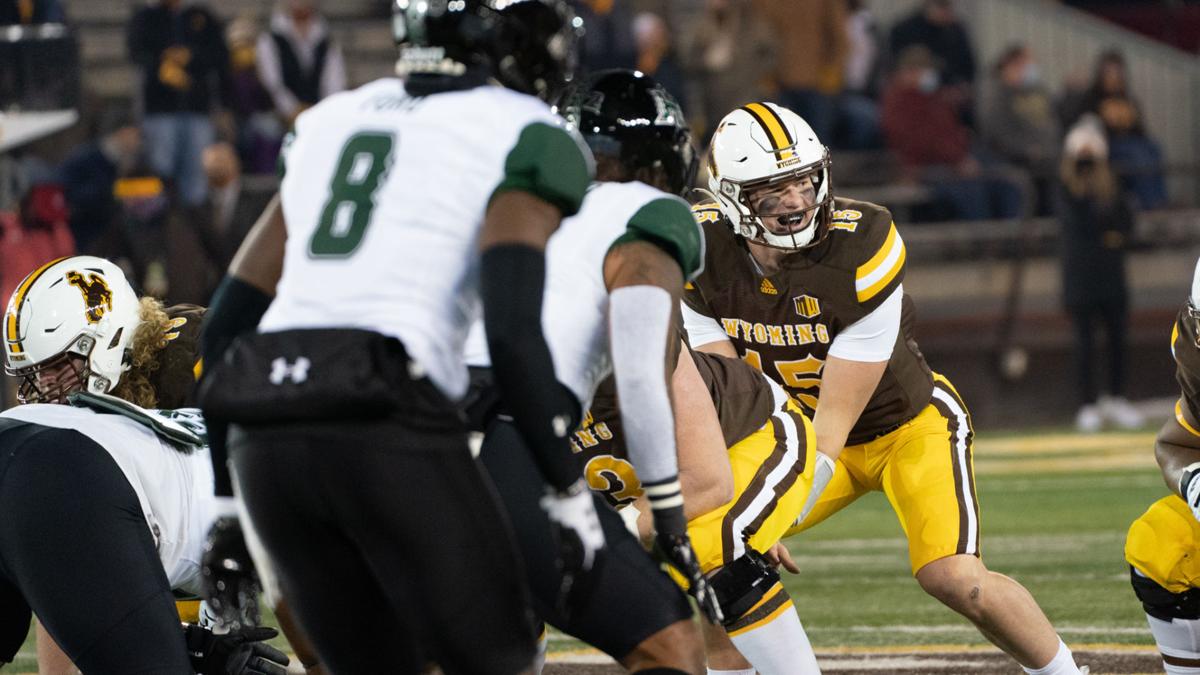 Wyoming quarterback Levi Williams calls out a play during the Cowboys' game against Hawaii on Oct. 30, 2020, at War Memorial Stadium in Laramie.

It’s been a frustrating last couple of seasons for Wyoming’s sophomore quarterback, whose tough luck with injuries has been well-documented. Three season-ending injuries in as many years have kept Chambers off the field far more often than he’s been on it.

When healthy, the 6-foot-3, 225-pounder has proven to be arguably the Mountain West’s most dynamic signal callers with his legs. Chambers is averaging 6 yards per carry and has already accounted for 12 rushing touchdowns despite playing just 13 games so far with 12 starts.

Chambers is expected to be full go for spring practice, which is scheduled to begin April 6, and the top priority for the Cowboys has to be keeping it that way heading into the summer and into the fall. The same could be said for Levi Williams, who took over as the starter once Chambers went down with a leg injury three snaps into the Cowboys’ pandemic-shortened season.

But there’s some work UW’s signal callers have to get done this spring, which includes learning a new offense. Tim Polasek, a former assistant of UW coach Craig Bohl’s when both were at North Dakota State, is taking over as the Cowboys’ offensive coordinator following Brent Vigen’s departure. He’ll bring a multiple, pro-style scheme that isn’t significantly different from what the Cowboys ran under Vigen but will include some new terminology and wrinkles.

Polasek will double as the Cowboys’ quarterbacks coach, a role in which he’ll be responsible for helping Chambers, Williams and the rest of the signal callers improve the most glaring issue within UW’s offense: efficiency in the passing game. The Cowboys have been among the bottom 10 teams in the Football Bowl Subdivision in that department in recent seasons.

Not since Josh Allen’s last season at UW in 2017 have UW’s quarterbacks collectively completed more than half of their passes. Chambers has thrown for 1,187 yards with 10 touchdown passes against just three interceptions in those 13 games, but he’s completed just 46% of his passes. Williams had a 49.5% completion rate in his five starts last season and has thrown for 1,220 yards with four TDs and five interceptions through the first nine games of his career.

Bohl has made no bones about the fact the Cowboys can’t continue to be that inefficient through the air if they’re serious about becoming a contender again in the Mountain West. Strides need to be made, but Polasek said he likes the makeup and the skill sets of UW’s top two quarterbacks based on what he’s seen from them so far.

Chambers, who’s entering his fourth year in the program, has already been voted a team captain twice.

“I’m not discouraged at all,” Polasek said. “I think Sean being hurt last year, I wish I was looking at tape of a guy that was one year older from 2019. And then Levi, to me, as an offense, we didn’t hit -- and I know where Brent was, so I can comment on this -- we didn’t hit our goals, and we didn’t hit our standards. But you know what he did get? He got valuable experience, and he’s got film that he can learn from. And rather than focusing on the past and what we did or didn’t do, we’re just focused on moving forward.”

Filling out the depth chart at the position are freshman Gavin Beerup, who got a handful of snaps in the Cowboys’ final two games last season in place of an injured Williams, and walk-on Hank Gibbs. UW has added another quarterback to the roster in sophomore Jayden Clemons, a former walk-on at Utah.

This is the first in a 10-part series previewing each position for Wyoming heading into spring practice.  A new position will be published each day leading up to the first day of practice April 6.

BACK AGAIN: After going through a third season-ending injury in as many seasons, Sean Chambers is healthy again and expected to be full go this spring as the Cowboys' QB1.

Cowboys' sophomore signal caller, who's working his way back from another season-ending injury, has been cleared for activity.

Cowboys want to get the position more involved in the passing game in Tim Polasek's offense.

Wyoming's offensive line has no shortage of seasoned options

Cowboys in line to return more than 140 combined starts up front.

Wyoming getting closer to whole again along the defensive line

Contributors who opted out last season are set to return this spring, but the Cowboys are still dealing with some injuries up front.

Cowboys return their full two-deep at linebacker, including three of their top six tacklers from last season.

John Hoyland is entrenched as Wyoming's kicker, but what about the other specialists?

Cowboys open spring practice with punting and kick return duties up for grabs.

The Cowboys' sophomore quarterback briefly contemplated calling it quits after his third season-ending injury in as many seasons. The only thing he ultimately gave up was his old jersey number.

Clemons began his college career at Utah before joining the Cowboys' program this spring.

Williams is healthy this spring after sustaining injury to throwing arm that limited his effectiveness late last season.

Wyoming quarterback Sean Chambers throws a pass during practice on Oct. 12, 2020, at War Memorial Stadium in Laramie. When healthy, Chambers has been UW's starter since the end of the 2018 season.

Wyoming quarterback Levi Williams calls out a play during the Cowboys' game against Hawaii on Oct. 30, 2020, at War Memorial Stadium in Laramie.