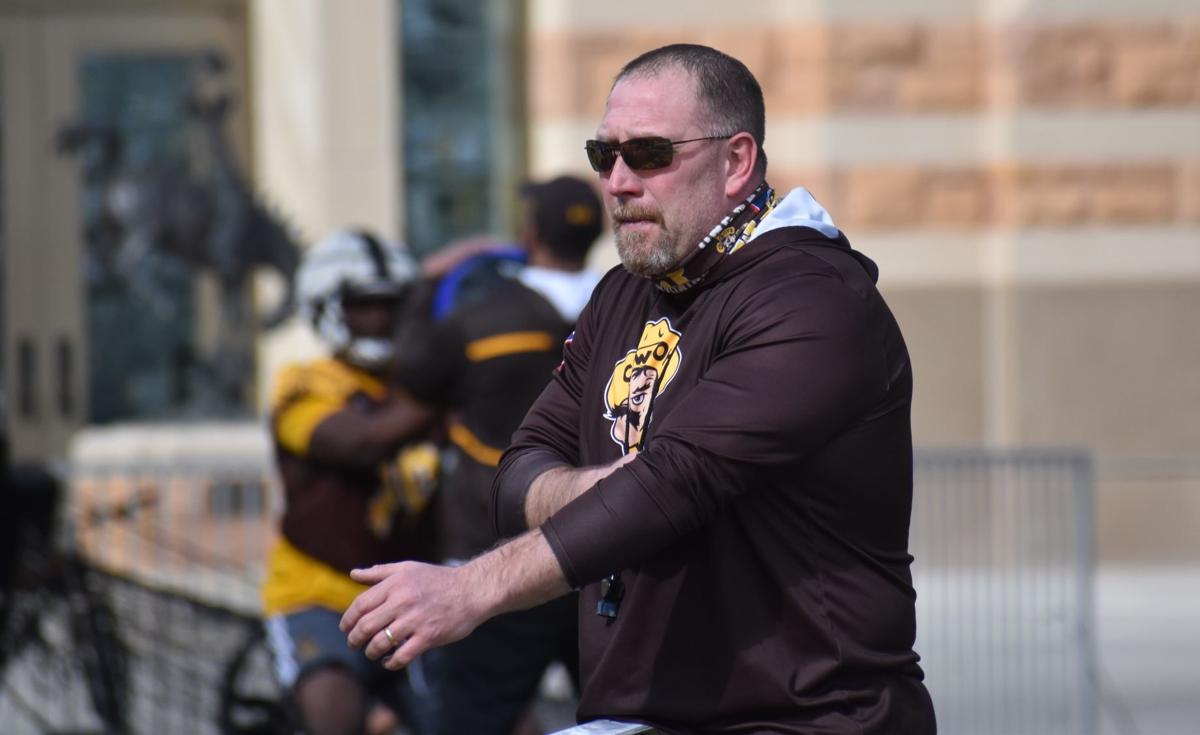 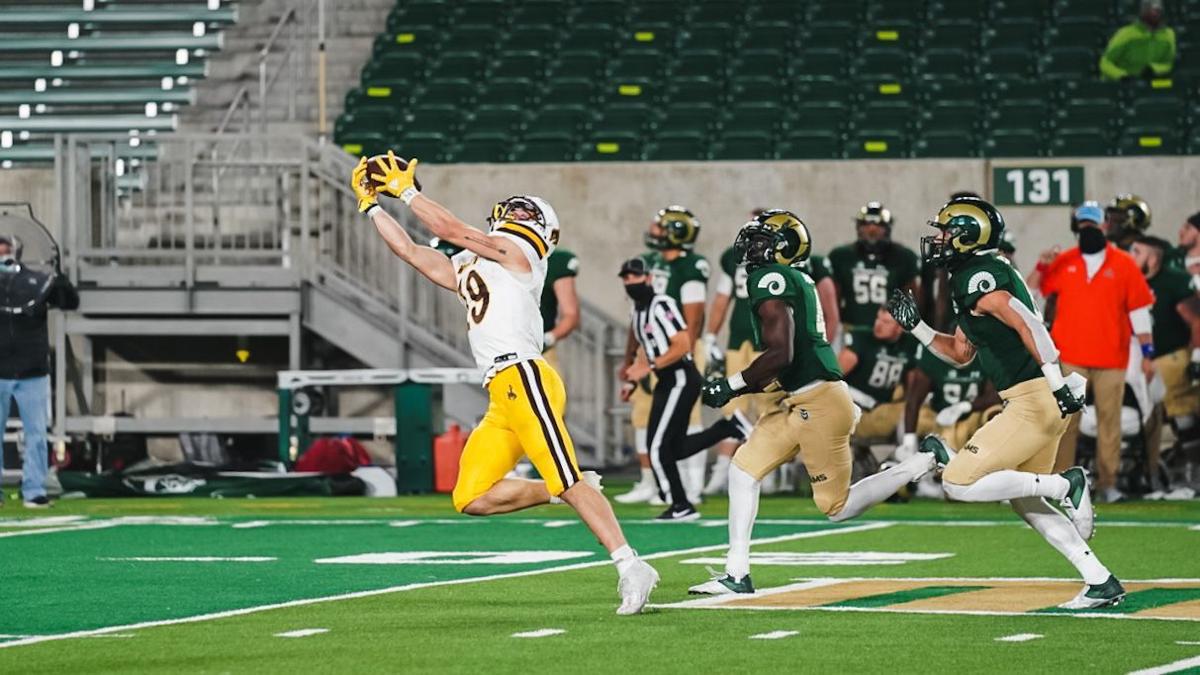 LARAMIE — If you’re hoping to get a bunch of specifics out of Wyoming’s coaches and players this spring regarding Tim Polasek’s offense, good luck.

Tight lips aren’t exclusive to the Cowboys. Paranoid about any information leaking that could possibly give future opponents a competitive advantage, college football programs nationwide are notorious for treating it like national secrets. And with a new coordinator installing a new offense that’s still a mystery to the rest of the Mountain West, details out of Laramie have been that much harder to come by.

No Craig Bohl-coached team is going to veer far from its offensive identity: a physical, hard-nosed unit working off a running game that still utilizes tight ends and fullbacks. Polasek will add his own wrinkles, but what exactly are those going to be?

What about the specific terminology? Nope. Formations? Forget it. Even answers to questions about the Cowboys’ much-maligned passing game and whether or not receivers have actually done more receiving than blocking this spring are veiled in secrecy.

“I’m not really at liberty to say a whole lot, but I’m really excited for this next year,” senior wideout Ayden Eberhardt said. “I can’t wait.”

But ask if there’s a noticeable difference in the way Polasek operates his offense compared to what the Cowboys were used to under former offensive coordinator-turned-Montana State head coach Brent Vigen, and players are quick to offer up more.

Where do things stand with Wyoming's quarterback competition midway through the spring?

“I think there’s a big change in energy throughout the practices,” senior offensive lineman Logan Harris said. “I know talking to a lot of guys on the offensive side of the ball, this is the most fun they’ve had practicing. And everybody knows 24-period practices during spring ball can get pretty grueling, so I think he definitely brings a really good energy.”

Multiple players wanted to make it clear: That’s not a knock on Vigen. An assistant on Bohl’s staff going back to their days at North Dakota State, Vigen spent the first seven years of Bohl’s tenure at UW calling plays and had a hand in recruiting most of the offensive players on the roster before landing his new gig in February.

But, Harris said, change isn’t always bad. And, almost unanimously among the players, a new, positive energy has stuck out the most about Polasek this spring.

Polasek said that’s no accident. His approach has long been part of his personality, particularly on the field.

“Just the understanding that if the kids give you everything, they deserve your best effort,” Polasek said. “And I really believe for us to go out there and enjoy the practice, you’ve got to have a great amount of care for your teammates and you’ve got to really be into it.”

Polasek is all about being alert, assertive and efficient. It’s why the Cowboys were already what Polasek estimated to be “93 or 94 percent” done installing the offense by the midway point of the spring not counting some situational packages. UW held its ninth practice, a scrimmage, on Saturday.

A golf club helped bring Tim Polasek and Craig Bohl together. Trust has reunited them at Wyoming.

Everything is seemingly moving faster in Polasek’s offense. There are more shifts and motioning, according to some players, but even the time it takes the offense to get up to the line of scrimmage after each play is shortening, which hasn’t gone unnoticed by linebacker Charles Hicks, who admitted he’s gotten winded at times trying to keep up.

“They’re getting on the ball quick, lining up fast and snapping that ball,” Hicks said. “So that makes us have to line up faster. They’re trying to throw us off every day, so there’s definitely a difference for sure.”

So does that mean an offense that’s ranked in the top 50 nationally in time of possession four out of Bohl’s seven seasons at the helm is about to start moving at warp speed? Not exactly.

Don’t expect the Cowboys to abandon huddles anytime soon. It’s just that Polasek wants the offense breaking them sooner so that it has plenty of time to survey the defense before the snap and make any necessary adjustments.

“I do take a lot of pride in being a huddle team,” said Polasek, who spent the previous four seasons as Iowa’s offensive line coach. “We were a little bit like this when we were good at Iowa. In the huddle, we functioned fast. My point is to get the quarterback up to the line of scrimmage in that window of 17 to 13 seconds so if he has to change anything, he can. Or if we wanted to get into running any double calls, he’s comfortable getting to the right pictures.

“I think with shifting, motioning and training, we haven’t done a ton of that. But when you do do it, you want to apply pressure to the defense. You want to shift quickly, you want to motion fast, and so getting all of our stuff to kind of look the same has been a very big point of emphasis for us.”

Another characteristic of Polasek’s coaching style? Aggressiveness, something that appealed to Bohl going back to their first stint coaching together at NDSU.

One schematic detail Polasek has revealed is that he plans to use the entire field to attack defenses. That could mean dumping passes off to running backs out of the backfield. It could also mean stretching them vertically with deep balls, something UW’s defense has had to defend against quite a bit this spring.

Of course, getting used to the way a new coach wants things done in a new offense is an adjustment for Polasek’s players. Like any coach, when his players don’t meet his expectations, he lets them hear about it. But to hear the players tell it, even the energy Polasek puts into that is more constructive than demeaning.

“If you mess up, he’s going to correct you,” Harris said. “He’s not going to MF you or anything. He just has that good energy. He’s a pickup guy, not a putdown guy.”

Said Eberhardt, “It’s passion is how I look at it. Everyone is yelling, and we’re all passionate about doing this. We love this game, we want to win football games, and we want to put points on the board. We all have that same common goal, and Coach P has been able to kind of instill that as well.”

Fans will get their first glimpse at what the Cowboys have been working on during UW’s spring game on May 8 at War Memorial Stadium, though how much Polasek will be willing to show at that point is unknown. It may not be until UW’s season opener Sept. 4 against Montana State that the offense is fully unveiled.

But going through the process with their new offensive coordinator has been a refreshing experience for those who are part of it daily.

“It’s kind of like in Madden when you find a new play that works,” Eberhardt said. “We’ve just got some different concepts and some different things we’ve been trying out and seeing what we can do, what personnel we have, who can do what and kind of going from there. It’s been really cool to kind of be testing the limits of who can do what and what we can do as an offense.”

HOME STRETCH: Wyoming is in the back half of its spring practice schedule, completing its ninth of 15 practices Saturday.

HE SAID IT: "We love this game, we want to win football games, and we want to put points on the board. We all have that same common goal, and Coach (Polasek) has been able to kind of instill that as well." -- WR Ayden Eberhardt.

The in-state product has put himself in position for playing time this fall with his physicality and toughness.