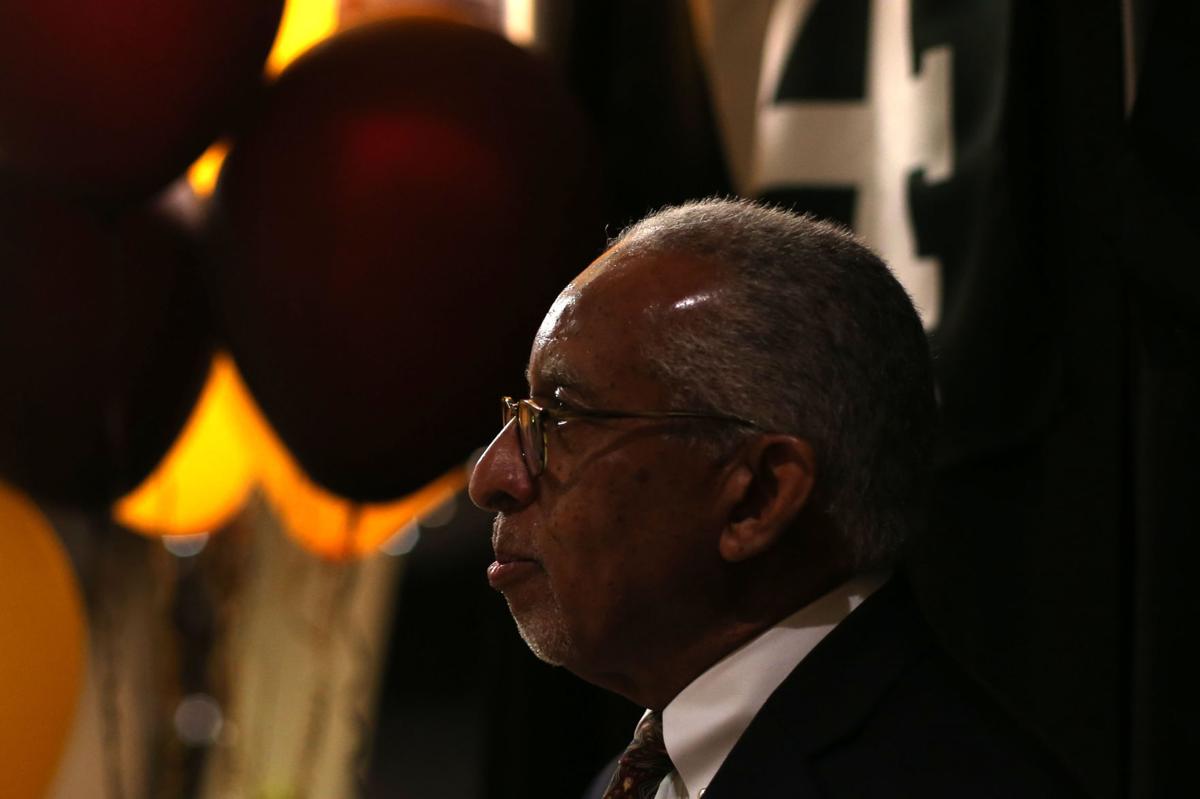 Former Wyoming football player and Black 14 member John Griffin speaks at a dinner honoring the men at War Memorial Stadium on Sept. 13, 2019, in Laramie. Griffin said the nationwide protests of racial injustice bring back memories of the events of 1969 leading to the Black 14's dismissal as well as his days as a youngster growing up in California. 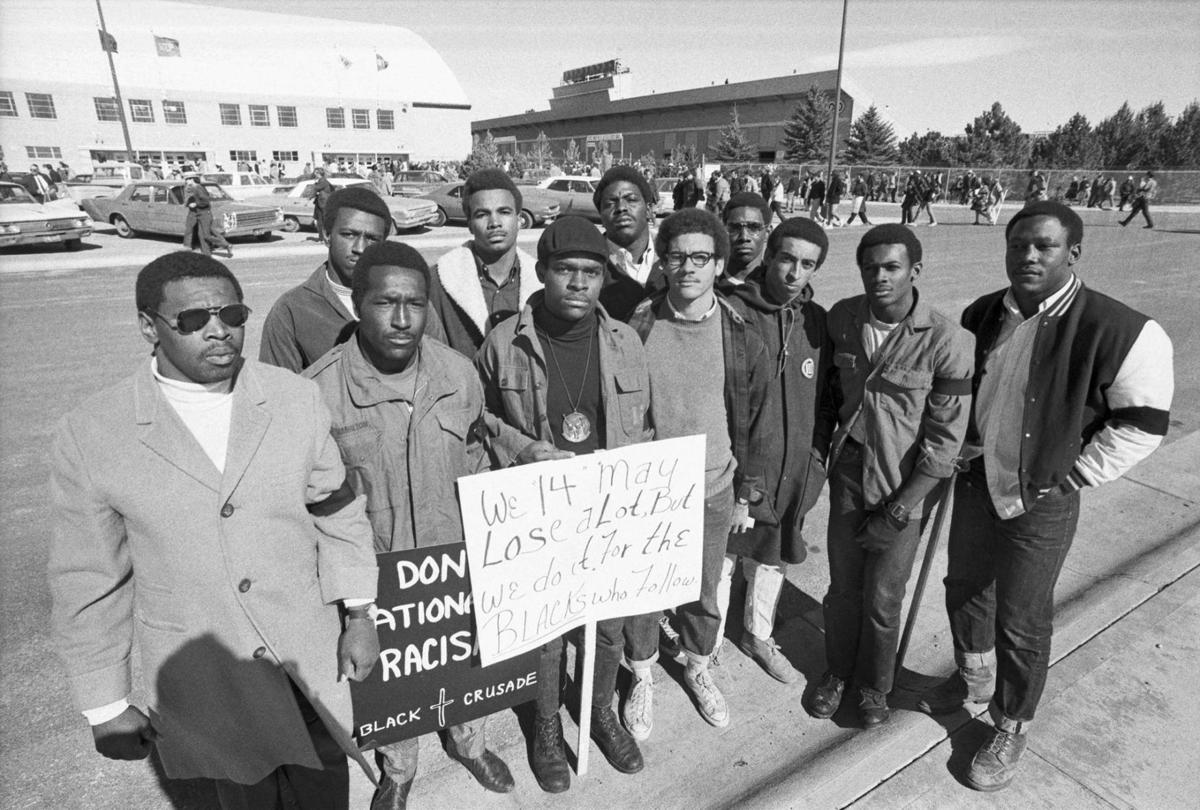 Members of the Black 14 join a protest outside War Memorial Stadium in Laramie after they were removed from the team in 1969. 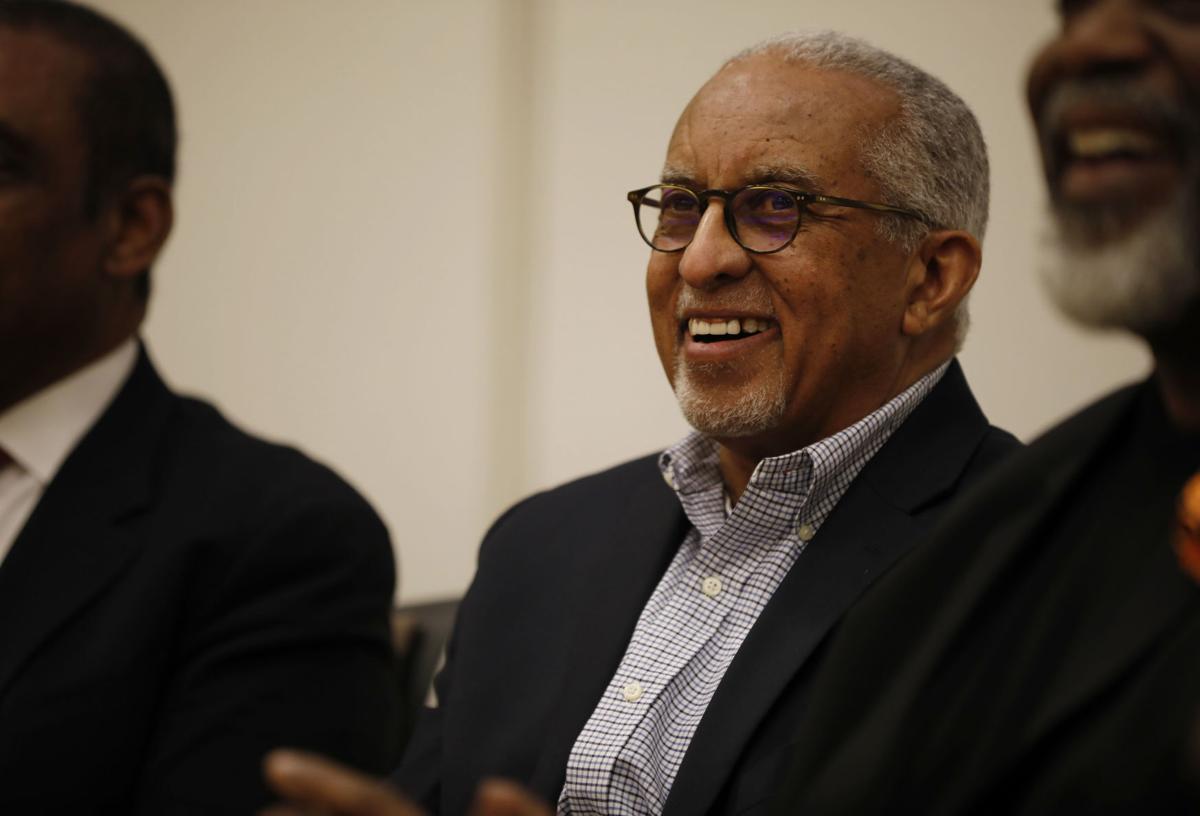 LARAMIE — Nearly two weeks after George Floyd’s death, his killing and the conversations about racial injustice and police brutality that have subsequently been reignited continue to grab headlines as protests continue across the country.

For John Griffin, it’s all brought on a case of deja vu.

Griffin was one of 14 African-American players dismissed from the University of Wyoming’s football team in the fall of 1969 for seeking permission to silently protest treatment from BYU football players as well as now-defunct racist policies in the Mormon Church, which still owns BYU. A member of what’s more commonly known as the Black 14, Griffin said “it made me angry” to see the Memorial Day video of former Minnesota police officer Derek Chauvin pressing his knee into the neck of Floyd for more than 8 minutes before Floyd went unconscious and was eventually pronounced dead.

“The cop, he had no emotion whatsoever. The poor guy is trying to breathe and telling them he can’t breathe,” Griffin said. “That hit me in my heart and made me angry and saddened me because he lost his life. But then you look at, that could happen to any African-American person. Or person. (Last week) there was an older fellow who’s a little bit older than me in Buffalo, New York, that walked up to the cops and was trying to have dialogue. They pushed him down, and he hit the back of his head. Now he’s in serious condition in the hospital apparently. I mean, wow. You sort of at this juncture in time, particularly if you’re African-American, you’ve got to keep your head on a swivel because you never know.”

Protests have broken out nationwide in response to the death of Floyd and Breonna Taylor, a black woman who was fatally shot by a Louisville police officer in March. Among the cities that have held protests is Denver, where Griffin lives with his wife.

Griffin said he hasn’t participated in any of the protests because he’ll turn 72 years old later this year. He’s doing everything he can to limit his chances of contracting the novel coronavirus, which has already been responsible for more than 109,000 deaths in America alone, according to the latest data from Johns Hopkins University.

“I’m supporting the good part of the protests hard, but I’m staying out of that,” Griffin said. “It’s just something I’d rather not now that I’m much older.”

Watching what’s happening, though, takes Griffin back to Wyoming 51 years ago when then-UW football coach Lloyd Eaton kicked Griffin and the rest of the Black 14 off the team before they even had the chance to ask if they could wear black armbands during the Cowboys’ game against BYU in October of 1969. Many of them joined on-campus protests of Eaton’s decision but never played another game for UW, though Griffin was one of the few that returned to the team the next season.

“When that happened, it took me back decades,” said Griffin, who received a degree in education from UW in 1972.

Memories can be traced back even further than that for Griffin, who was born in Los Angeles and raised in San Fernando, California. He vividly remembers the Watts riots, a series of confrontations between law enforcement and citizens in other predominantly black neighborhoods in South-Central Los Angeles in 1965, and the riots resulting from the brutal beating of Rodney King, a black man who endured the violence from four Los Angeles police officers — three of them white — in 1992.

Griffin said current protests have also triggered memories of an experience he and a friend had with law enforcement as teenagers.

“He had a Volkswagen and I had a ‘59 Volkswagen, and we were swapping out carburetors,” Griffin recalled. “It was two blocks away from my home, my friend’s house, and we were stopped by the LAPD (Los Angeles Police Department). These were white cops who stopped us in the community and asked us what we were doing. I said, ‘Well we’re working on my Volkswagen and his Volkswagen.’ I pointed in the direction of my street and said, ‘My street’s over there. His street’s over there. I’m taking him home.’ He goes, ‘Well what are you doing?’ I said, ‘If you look in the back seat of my car, there’s a carburetor sitting on the floor.’ He looked in the back seat, and there was the carburetor sitting on the floor.

“And they kept us there for I don’t know how long. It seemed like an eternity. And then they said, ‘Well, you guys can go.’ And my takeaway was the only reason they stopped us was because we were young, black kids. That’s resonated with me for years. And that came back pretty quickly when I heard about that.”

The ongoing protests have also brought conversations about former San Francisco 49ers quarterback Colin Kaepernick’s silent protests back to the forefront in the sports world. While Kaepernick explained that his reason for sitting and kneeling during the national anthem before games during the 2016 season was to bring awareness to racial injustice and police brutality in America, many took it as a sign of disrespect toward the military and the American flag.

The flames of that discussion were further fanned earlier this week when New Orleans Saints quarterback Drew Brees said during an interview with Yahoo Finance that “I will never agree with disrespecting the flag of the United States of America or our country” in response to a question about how the NFL should respond to players kneeling in protest in the future. Brees drew a wave of backlash from those who realized the NFL’s all-time passing leader was still missing the point of Kaepernick’s protests and viewed his comments as insensitive, including Griffin.

“The politics got involved with it and changed the direction of what Kaepernick was trying to do and basically what we did. We pushed back. We got pushed back on really. But the politics changed it to make it against the flag and against the military. That was never the case.”

Griffin added that “if you’re missing the point, you’ve got to check yourself.” Which Brees has since done.

After apologizing for his comments, Brees took to social media Friday night to address President Donald Trump, who gave his thoughts on the situation with multiple tweets earlier in the day, saying Brees “should not have taken back his original stance.” Trump ended his final tweet on the matter with, “NO KNEELING!”

“Through my ongoing conversations with friends, teammates and leaders in the black community, I realize this is not an issue about the American flag,” part of Brees’ response to the president read. “It never has been. We can no longer use the flag to turn people away or distract them from the real issues that face our black communities.”

To @realdonaldtrump Through my ongoing conversations with friends, teammates, and leaders in the black community, I realize this is not an issue about the American flag. It has never been. We can no longer use the flag to turn people away or distract them from the real issues that face our black communities. We did this back in 2017, and regretfully I brought it back with my comments this week. We must stop talking about the flag and shift our attention to the real issues of systemic racial injustice, economic oppression, police brutality, and judicial & prison reform. We are at a critical juncture in our nation’s history! If not now, then when? We as a white community need to listen and learn from the pain and suffering of our black communities. We must acknowledge the problems, identify the solutions, and then put this into action. The black community cannot do it alone. This will require all of us.

Judging by the response both near and far, more people may be understanding, too. Griffin said he saw a Facebook video of a protest last week in Laramie but didn’t realize protests had reached several cities in Wyoming, including Cheyenne, Casper, Jackson and Pinedale, which admittedly came as a pleasant surprise to him.

The Black Lives Matter human rights movement has also gone international. England, France, Germany, Ireland, New Zealand, Kenya and Japan are just some of the other countries where protests have broken out.

With many apparent acts of police brutality and racial injustice now caught on video, it has Griffin wondering if everybody is finally starting to see — and listen to — how serious those issues are in America.

“What I can say is this whole movement feels different,” Griffin said. “What I mean by that is there’s something happening that, if you look at the mixture of folks that are participating, they’re from all walks of life unlike the protests that I remember. You had a sprinkling of white people, but it was predominantly black. Now you have everybody. And now we have protests in every state of the union going on. We have protests around the world that are going on in England, Germany, France … I’m going, ‘My God.’

History lesson: The story of the Black 14 resonates 50 years later

Fifty years ago this week, 14 black members of the University of Wyoming football team met with head coach Lloyd Eaton to ask if they could we…

David Mercado decided he needed to be there to document the moment after years of news about police brutality around the country made him passionate about police reform.

Many Wyoming political leaders question the need for policy changes -- at least on the statewide level.

Former Wyoming football player and Black 14 member John Griffin speaks at a dinner honoring the men at War Memorial Stadium on Sept. 13, 2019, in Laramie. Griffin said the nationwide protests of racial injustice bring back memories of the events of 1969 leading to the Black 14's dismissal as well as his days as a youngster growing up in California.

Members of the Black 14 join a protest outside War Memorial Stadium in Laramie after they were removed from the team in 1969.